Nature as art’s food for thought

In a recent article in NRC, Janneke Wesseling discussed 'Joint Venture. Nature and art' exhibition at Kunstvereniging Diepenheim (can be visited until 26 September). The participating artists, Linde Ex, Sunjoo Lee & Ko de Beer, Aliki van der Kruijs, Jef Faes and Sema Bekirovic were selected by exhibition maker Flos Wildschut (1960) because of the role nature plays in their work; not only as a source of inspiration but also as part of the creation process. After outlining the various works of art, which according to Wesseling are not all equally interesting (perhaps because of the process of creation, but not as the end result), she concludes:

A new relationship between man and nature. By this we mean a radically different vision of the white, western man who no longer masters nature but finally realizes that he is part of it and responsible for it.But what will that art look like? And to return to Wesseling's question: is it possible at all to find a harmonious balance between man and nature? An interesting question that I will certainly take with me when discussing the following six works of art in which the relationship between man and nature is central. To start with the great Joseph Beuys, whose visionary view of people, society and nature and influence on countless artists cannot be overstated. 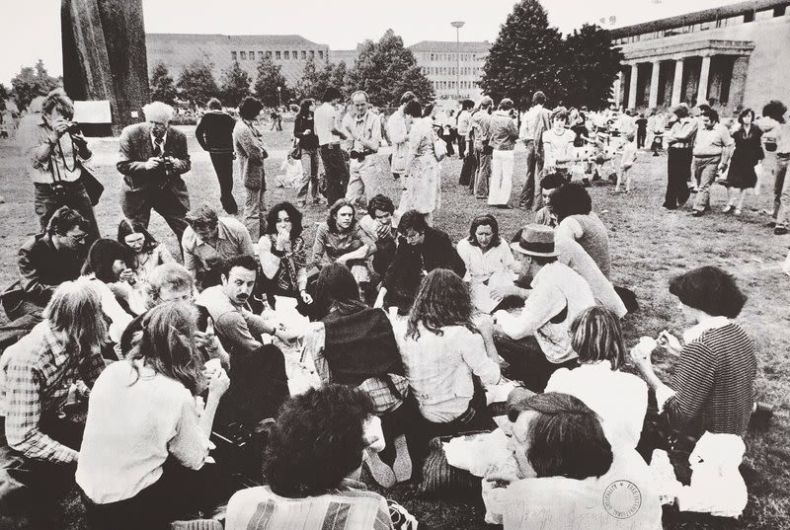 0 Media items ᛫ 8 Available artworks
4 Shows ᛫ 6 Highlights ᛫ 0 Recommendations
May 12, 2021 marked the 100th anniversary of Joseph Beuys's birth and his influence on countless artists of the second half of the 20th century cannot be overstated. Beuys was a multi-talent who expressed himself in drawings and watercolours, installations, videos and sculptures, performances and Fluxus concerts. He used the most unusual materials such as tea, grease, wax, fruit juices and wood stain for his works of art. He also drew animals such as hares, elk, deer and mythological subjects. Everything he did and made was part of a great idea that everything can be art as long as it contributes to a better society.

It was from this thought that his famous statement 'Jeder Mensch ein Künstler' arose insofar as it can creatively contribute to the construction of the 'Sozial Skulptur' that our society is in fact. Art, politics and nature were closely intertwined for him, which explains, among other things, his involvement with the German Grünen. Although for most Grünen art was something for the elite, in Beuys' view art as a way of thinking, a mentality, was as important to people from all walks of life as food and drink. For example, his participation in the international art event Documenta (1982) consisted of planting 7,000 oak trees in the city of Kassel, in collaboration with the local population. A basalt column was placed next to each tree so that the tree and the column together formed a 'tree monument'. In De Groene Amsterdammer of 14 October 2015, Rudi Fuchs writes about this impressive project:

Great energies are active in the dynamics of human society and in dealing with nature. For Beuys these were material for sculpture. Ultimately, and in essence, the work with the seven thousand oaks is a spatial design, a process of growth and steady regeneration over time. Five years after the first oak, the last one was planted in 1987. The artwork has been growing for almost thirty years and with oak it will continue for hundreds of years. That overwhelming fact is summed up in precisely that linking of oak and basalt. In European culture, the oak is seen as strong and durable – a tree that is long-lived and therefore almost sacred. Basalt is solidified and shrunken lava and thus a rock that has arisen from the heat of the earth itself.

Beuys wanted, as he called it, to free up and stimulate 'human capital' - or the ability to think for yourself and take responsibility, also with regard to the future of the planet. This message, which in the eighties was mocked by many as being naive, is only growing in significance. 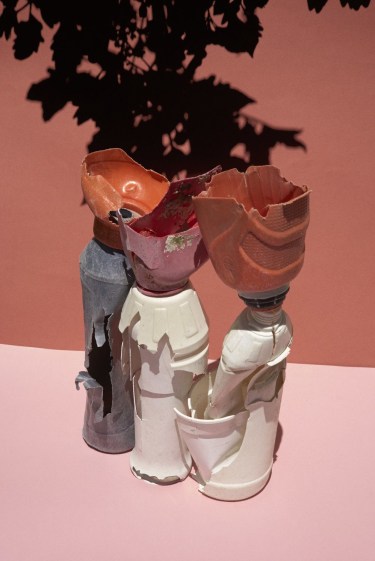 1 Media items ᛫ 31 Available artworks
3 Shows ᛫ 5 Highlights ᛫ 0 Recommendations
If art can inspirit worthless material, then Thirza Schaap succeeds wonderfully in this, as she takes the most attractive photos of the man-made and still growing mountain of waste. The strength of Schaap's work lies in the paradoxical combination of the beauty of the art object on the one hand and the underlying tragedy of the subject on the other. She herself says about the 'Plastic Ocean' project to which this work belongs:

Plastic Ocean is a project I started to raise awareness about pollution, as an attempt to prevent, or at least limit, the use of plastic.

You could argue that in Schaap's work it is not nature itself that is central, but the destruction of nature by man. Her work is an aesthetic appeal to treat our environment more carefully. We keep throwing garbage into that ocean, but in the end we don't solve the problem. The ocean rejects what doesn't fit into its biotope. People will have to solve the problem themselves, or make art out of it, like Thirza Schaap. Art with a mission. 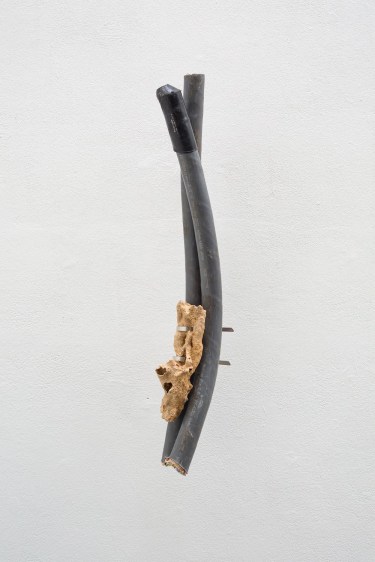 0 Media items ᛫ 9 Available artworks
2 Shows ᛫ 0 Highlights ᛫ 0 Recommendations
Daniel de Paula's sculptural constructions are intended to reflect the way in which socio-political, economic, historical and bureaucratic power structures determine and shape both places and relationships. (Post-)colonial processes of appropriation and de-contextualization of everyday materials and objects contribute to alienation from natural resources and from actual history. De Paula's work meditates on the narrowed way in which we approach existing systems and structures. For example, certain cultures regard fulgurite (a gemstone created by a lightning strike in quartz-rich soil) as an energy source that can stimulate your personal and spiritual development because it ensures a good grounding and flow of energy.

When we think of energy in the West, we often think of electricity cables, because what would we be without? This is just one example of a spiritual versus a prosaic interpretation of the term 'energy'. But to what extent do these different meanings that we give to objects and materials determine the way in which we deal with them? The further we are removed from nature, the less aware we seem of perhaps not scientifically demonstrable but nevertheless existing spiritual and/or medicinal characteristics that groups of people and cultures can attribute to materials and places.

3 Media items ᛫ 103 Available artworks
0 Shows ᛫ 8 Highlights ᛫ 0 Recommendations
Miguel Sbastida's work questions the traditional scientific conceptions and boundaries between living and non-living material, the history of the planet and that of man, in order to find new ways to relate to the earth as humans. Why does a person want to carve his name on an ancient tree trunk? Sbastida tries to extract secrets from nature in order to investigate problems related to the planet such as climate change in a more intuitive way. For example, he made a paleo-climatic reconstruction - based on research into glacial ice cores and data from the NASA Climate Change's Database - in the form of an archaeological graph of the atmospheric CO2 density (greenhouse effect) over the past 800,000 years. The graph shows the 'architecture' of the climate during the successive ice ages and contains a photo of a - now demolished - building that was built about 10,000 years ago and marked the beginning of the Holocene and the rise of human civilization. The historical maximum of CO2 emissions was 300 parts per million ppm (a unit of measure used to quantify air pollution), a level that was first exceeded in 1950. Today we are at a planetary average of 413 parts per million and go we are approaching 500 or more. Sbastida's art is based on natural phenomena. In the first place, they show how incredibly overwhelming and perfect nature is and how devastating man can be, just by carving his/her name in a tree bark. 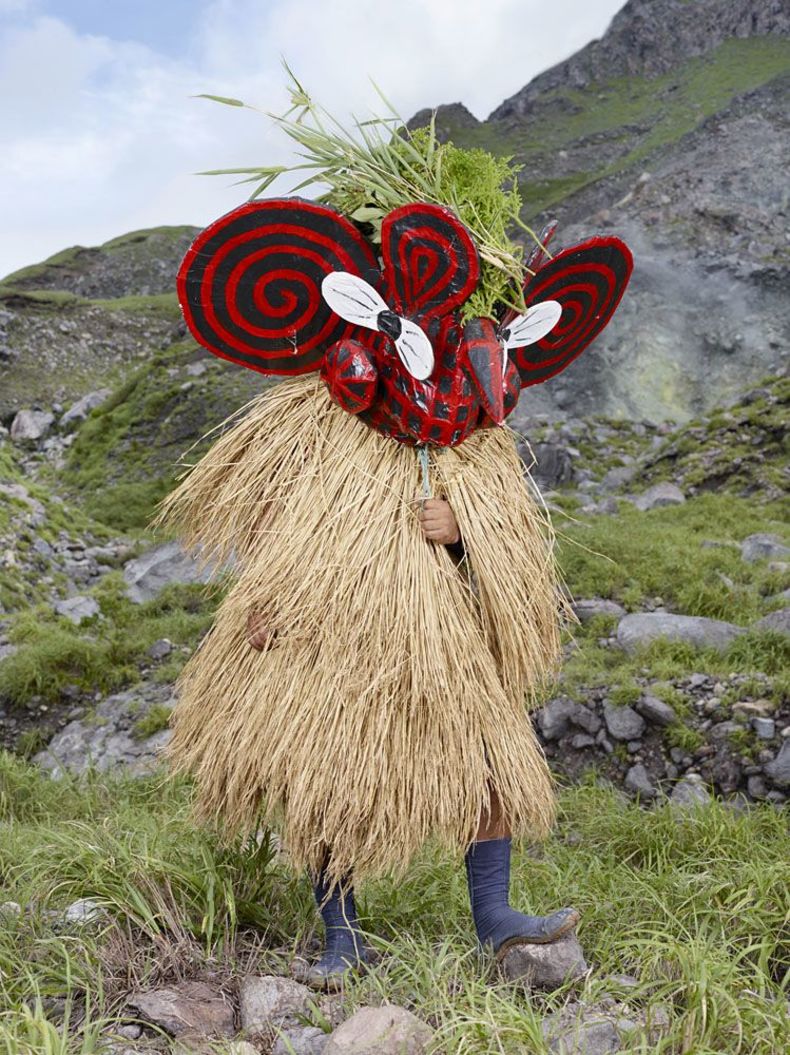 0 Media items ᛫ 2 Available artworks
2 Shows ᛫ 0 Highlights ᛫ 0 Recommendations
During his many trips to Japan, Charles Fréger noticed that the Japanese have highly empathetic relationship with their natural environment and that they are extremely aware of the vitality of nature. Symbolic are the yōkai: ritual figures that are imagined and embodied by man during festivals and ceremonies as an attempt to exorcise threatening elements and find meaning in natural events. The series presents a variety of figures, from herons and deer to ogres and demons that he lets wade in the water, or move in rice fields as supernatural beings who stand between man, animal and nature. Fréger: “Perhaps one of the most fascinating aspects of these yōkai costumes is the visibility of the people behind the masks. In this way they show that man does not disappear, but plays a figure that he has under control. People are not transformed; they are playing. That is why the Japanese aspect of theatricality is so important in this project.” (https://www.spoon-tamago.com/2017/10/24/yokainoshima-charles-freger/) Perhaps we can speak of a merging of man and nature in Freger’s photo’s in the form of the yōkai. 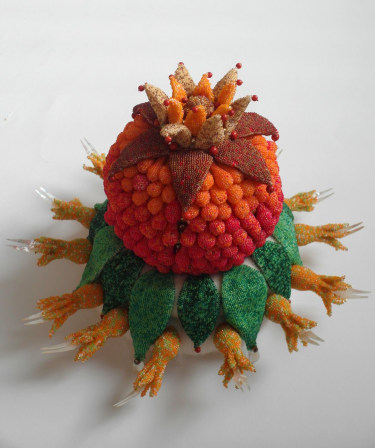 0 Media items ᛫ 13 Available artworks
0 Shows ᛫ 0 Highlights ᛫ 0 Recommendations
Kroon voor het genot III [Crown for pleasure III] by Regula Maria Müller is inspired by the tanka, a five-line lyrical poem that originated in fifth century Japan. In the tanka, an impression or an element from nature – e.g. a gust of wind, a sunset, a tree in blossom - is related to a personal experience or observation and interwoven into a poem. An example of a tanka is the following poem:

On the white sand
Of the beach of a small island
In the Eastern Sea.
I, my face streaked with tears,
Am playing with a crab
https://en.wikipedia.org/wiki/Tanka

During a visit to Japan, Müller discovered how, due to mutations in nature as a result of the disaster in Fukushima, ancient natural forms were supplanted and overgrown by new ones. The work Kroon voor het genot III is a pomegranate - a symbol of fertility because of their many seeds, but also of death because of the red colour of the inside of the fruit - consisting of glass beads, freshwater pearls, mother-of-pearl, copper wire, cotton and wool felt. With great patience and attention, in accordance with the Japanese tradition, images are created that develop from their original forms of nature into lively abstractions in which the boundaries between existing and non-existent, nature and fantasy are blurred. The human gaze and hand thus express mutations in nature without intervening in nature.