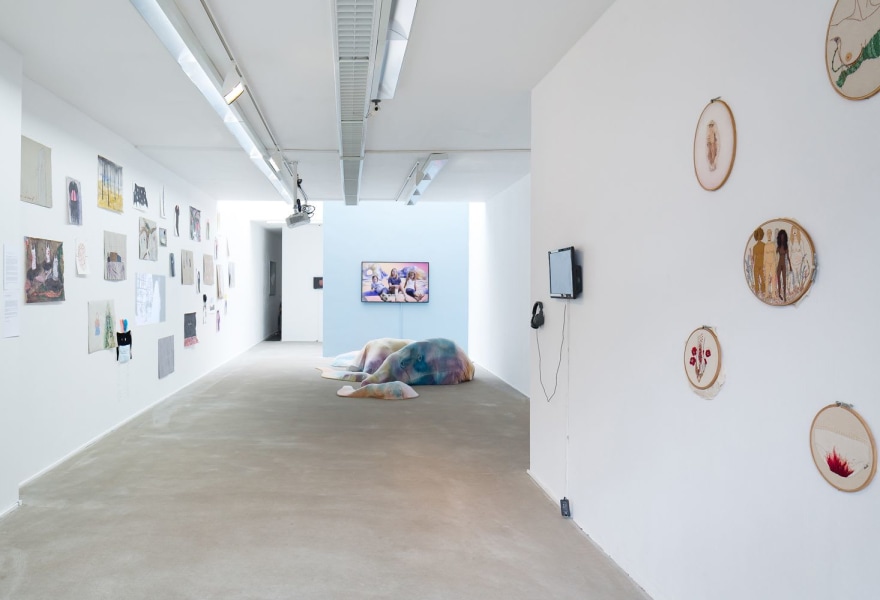 Until July 18 AKINCI is showing HUNGER, in which hunger is interpreted in a broad sense: hunger for life, love, human contact, touch and freedom. The idea is that the isolation and uncertainties of recent months have sharpened our senses. In the exhibition, five artists give us their unique artistic translation of the subject: Clarinde Wesselink, Sarah Naqvi, Melanie Bonajo, Cevdet Erek and Gluklya.

Sarah Naqvi's work is explicitly political, activist and feminist in character. Through her work, she exposes a variety of Indian (and frankly: universal) taboos that she considers to be outdated. Think for instance of menstruation, gender fluidity, female sexuality and unrealistic ideals surrounding the female body. In the past, she made a series of small embroidered vulvas as well as a protest blanket in response to a controversial Indian law. Her outspoken work has received a lot of criticism from orthodox people. For her materials, Naqvi often prefers a certain softness and vulnerability and she regularly applies traditional Indian techniques. Last season, Navqi started a residency at De Ateliers in Amsterdam. Just before quarantine started, she shipped a few of her works from India, her home country, to the Netherlands. In this exhibition, you can see a number of her embroidered works - that are both powerful and fragile at the same time - and a series of watercolour paintings. Her work has previously been featured in international group exhibitions (from Hong Kong and Berlin to New York) and Naqvi was also awarded the "The Phenomenal she" award (2019) and the NID Ford Foundation Grant (2018). 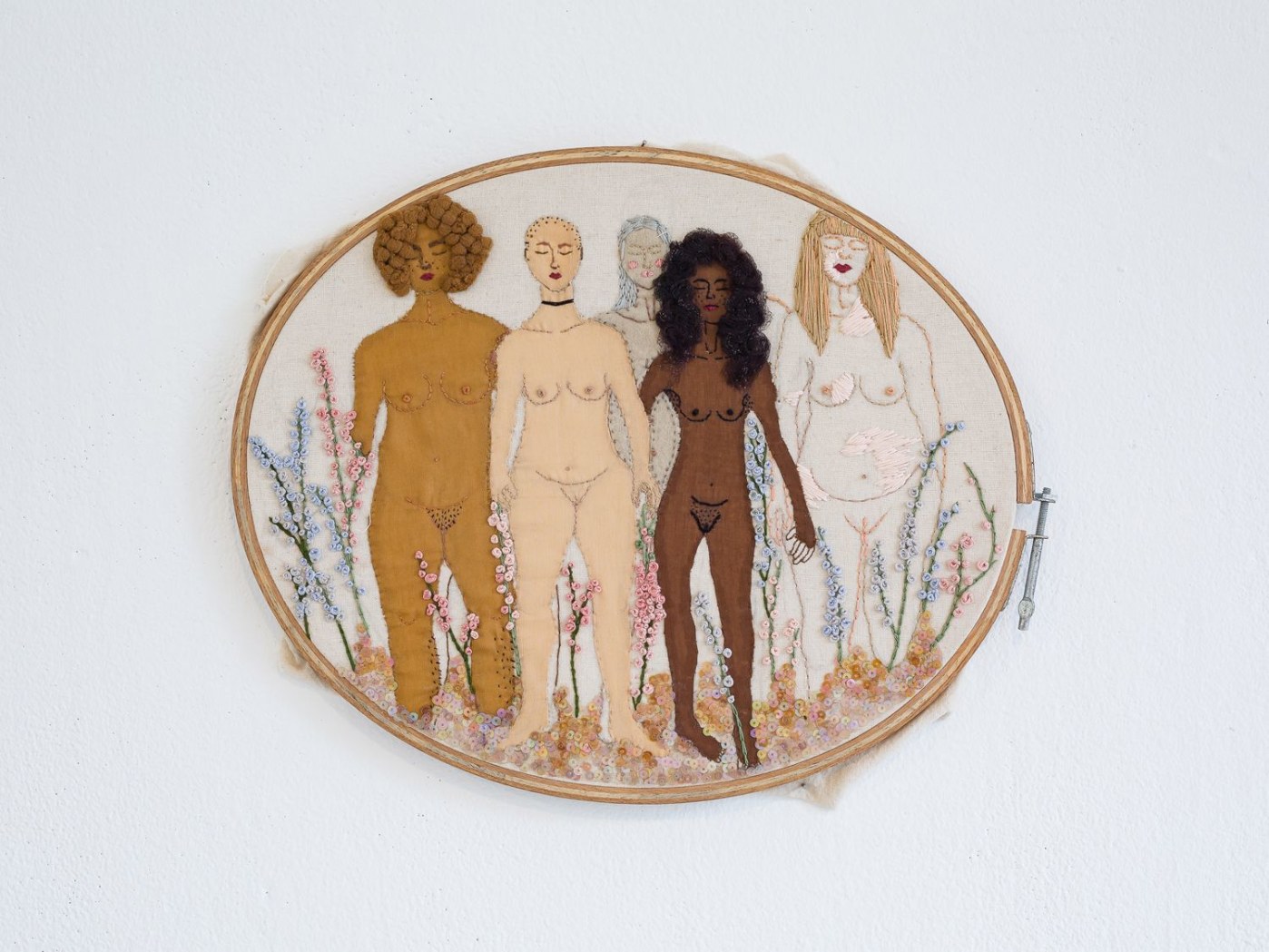 Turkish artist and musician Cevdet Erek focuses on perception and experience, in which place, time and rhythm play an important role. His work is often site-specific and in many cases developed for spaces that aren’t clearly linked to art. For example, for his participation in dOCUMENTA (13) in 2012, he made an installation in an abandoned warehouse. In 2017, he presented a project in front of the Turkish pavilion at the Venice Biennale. In 2012, he was awarded the Nam June Paik Award. In this exhibition, his work ‘SSS - Shore Scene Soundtrack installation’ (2007) is on show. Erek: “It is based on a very simple idea, in which you have a carpet and you’re using your hands to imitate the sound of the seaside”.

For this installation, Erek recorded his own hand movements. In it, we see how he massages a loose piece of synthetic carpet from his living room, placed on a classic Steinway piano. In an accompanying instruction booklet, Erek offers a variety of examples of possible hand movements that the viewer might imitate. He also describes his own feelings and experiences. Tip: Erek's work ‘Shading monument’ (2017) is currently on display in the entrance hall of the Centraal Museum in Utrecht.” 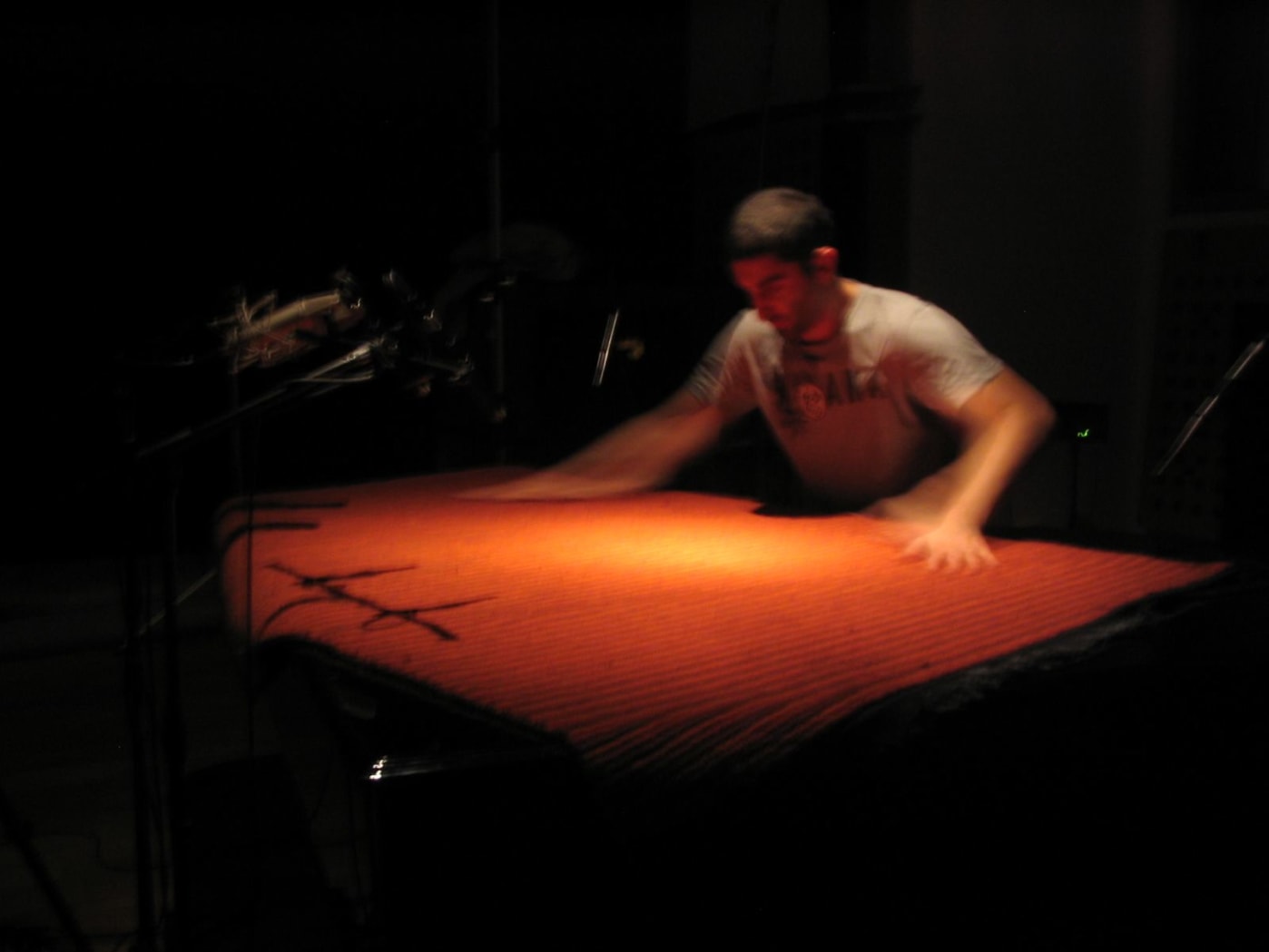 Gluklya, the artist name of Natalia Pershina-Yakimanskaya, is considered to be one of the pioneers of Russian performance art. She divides her time between St Petersburg and Amsterdam. "My position as an artist is always how to overcome ignorance and how to stay in dialogue." Vulnerability and power structures in public spaces play a central role in her practice, for which she also applies a lot of social science research. Yet, she interprets this vulnerability in surprising ways. Gluklya's work has been shown at the 56th edition of the Venice Biennale and was exhibited worldwide in a variety of group exhibitions. In 2018, she showed her work at the Van Abbemuseum. In the exhibition in AKINCI, we get to see how the corona crisis has affected her emotions and practice. In a series of slightly ominous watercolour and pencil drawings, she expresses what social distancing means to her. 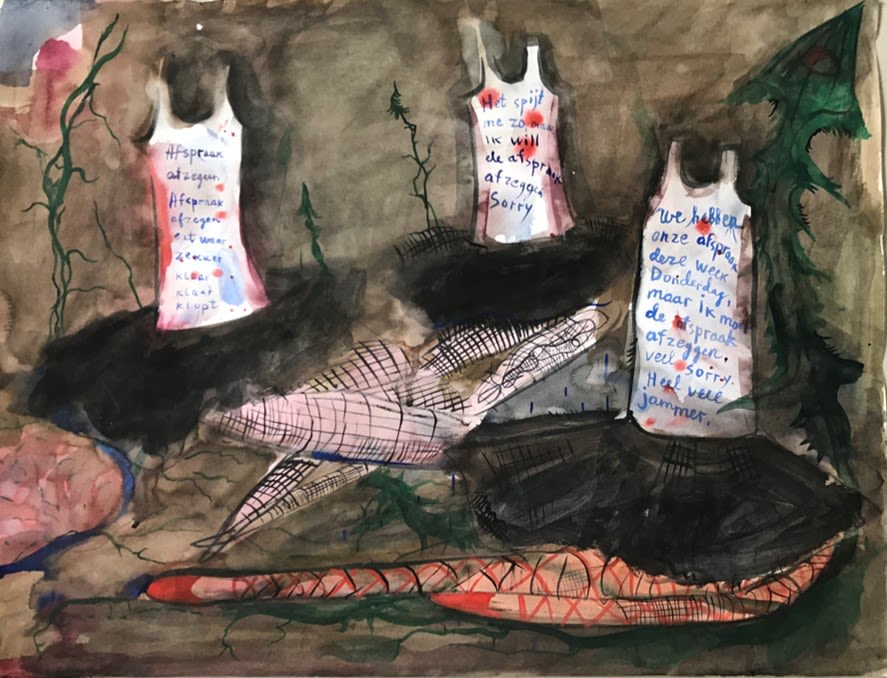 Melanie Bonajo uses film, photography, installations, performance and music to delve deeper into themes like intimacy and social isolation, especially in a world that is, according to her, becoming increasingly impersonal and sterile as a result of technological developments. Groups that find ways to function outside of the capitalist system have a magnetic appeal to this artist. Depictions of women also play an important role in her work, in response to the fact that in our dominant culture, the naked female body is mainly used as an object of desire or as a commercial vessel, used to sell products. Her work has previously been shown in Tate Modern, MoMA PS1, the Stedelijk Museum and Kunsthalle Basel. Bonajo will also represent the Netherlands at the next edition of the Venice Biennale. In the exhibition in AKINCI, Bonajo is showing her installation "ToucheMETell", which she made as part of a collaboration with the Stedelijk Museum and CineKid. In this video installation, she invites children (and adults) to think about their own body: about intimacy (and the lack thereof), physical self-awareness, gender and personal boundaries. 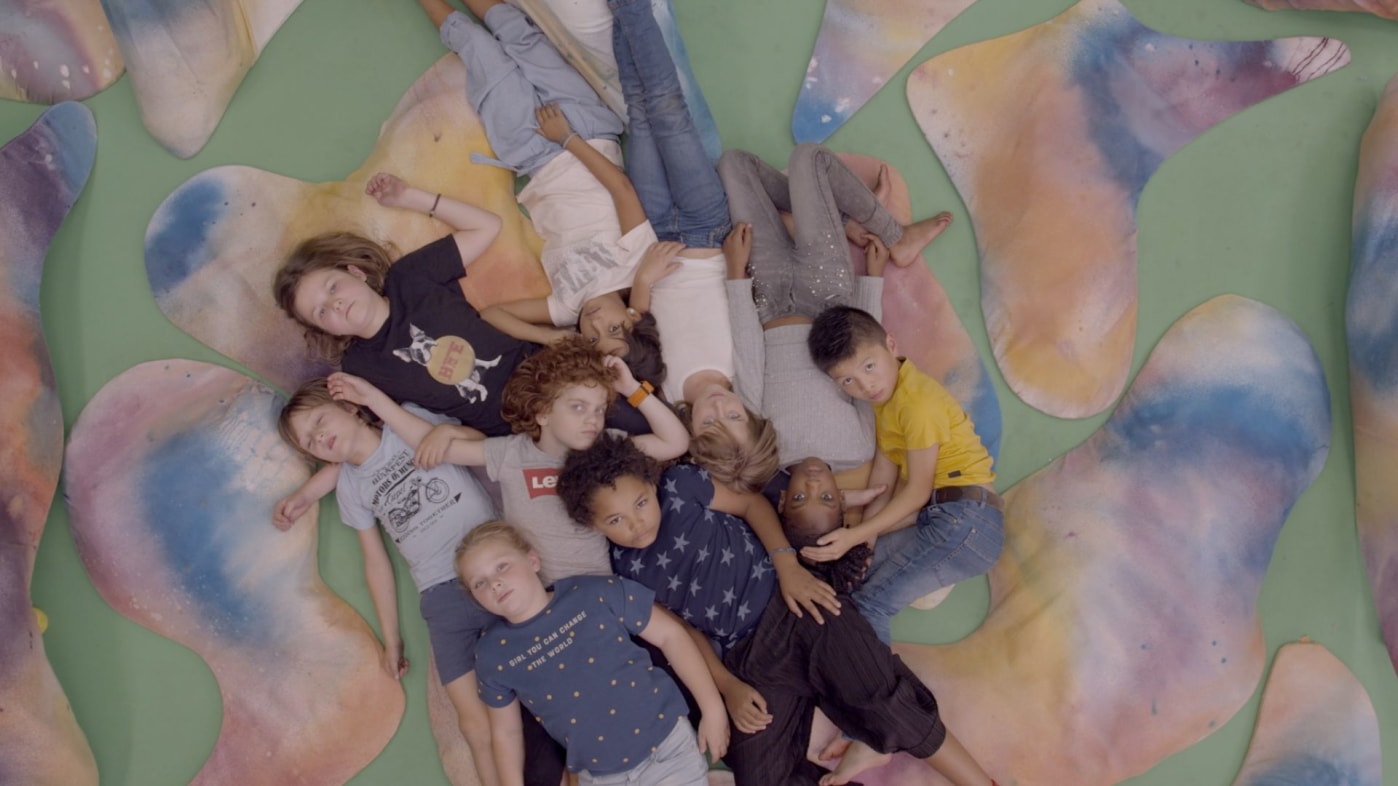 Clarinde Wesselink wonders how people in the future will give shape to their relationships in the public sphere — how will that work in a world in which social contact is increasingly taking place in a digital sense? Her practice starts with wearable sculptures, prosthetics and suits that result in a physical experience for the wearer. This way, she wants to force people to live more (and more physically) in the here and now. She did extensive research into movement patterns of people with a physical disability. By temporarily restricting people’s mobility through experiments, they become keenly aware of their movements. Wesselink: "With this series, I try to show how the physical experience of an emotion creates a specific relationship with the space around us and the body." These projects were recorded in a series of drawings and texts that can be seen in the exhibition at AKINCI. They were made during a stay in Japan and are inspired by the work of the famous Japanese artist Katsushika Hokusai. 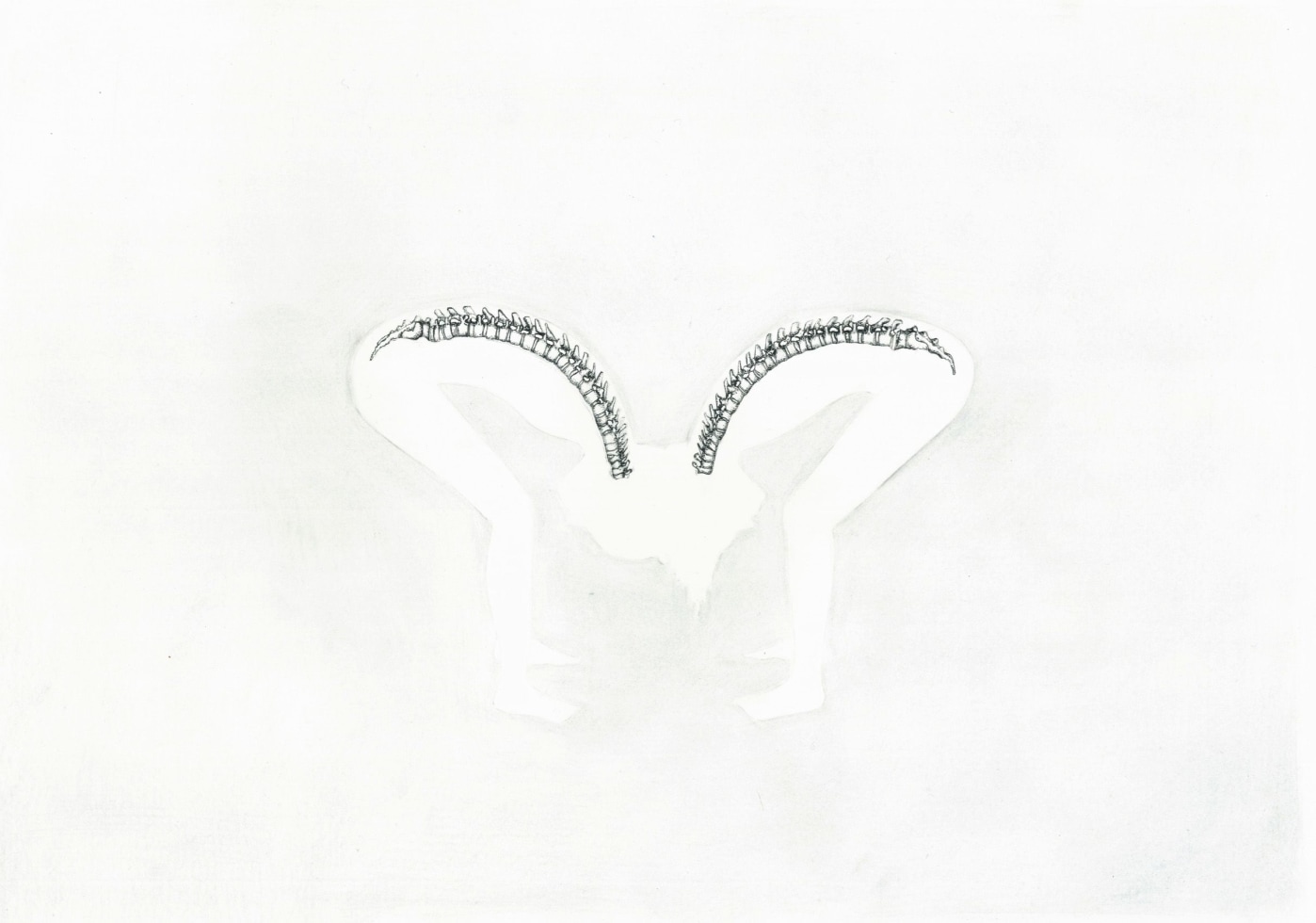 Clarinde Wesselink, Apart We Are together, 2020, AKINCI.
The exhibition HUNGER In AKINCI will be on show in the gallery until July 18. The gallery is open on Fridays and Saturdays from 1:00 PM to 6:00 PM. On other days, the gallery is open by appointment.
In this article