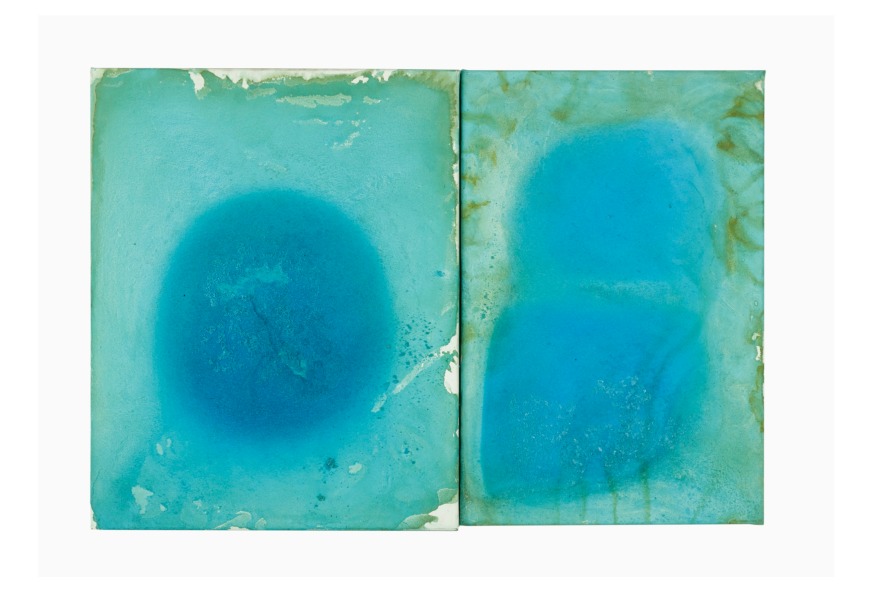 Sometimes only a small change in the normal proceedings can cause its reexamination. British artist Roger Hiorns asked a church choir to sing while lying down. A small intervention that led to a reconsideration of church traditions and the basic principles of the Christian faith. In a new series of paintings he also questions our gender-related view of sexuality.

Pathways, the fourth solo exhibition by the now 47-year-old British artist, is not a mid-career retrospective. Hiorns' oeuvre is more varied for it be called that, although elements that were previously in his work return in this show, but come together here for the first time.

Roger Hiorns' oeuvre is an investigation into form, material, the meaning we give to it, and the power relations that play a role in this. He works in different media and bends the various disciplines to his will, for example by reusing and transforming existing objects. Partly because of this, his work is not only characterized by contradictions formally, but also on a conceptual level, contradictions play a major role. Through these contradictions, Hiorns wants to break through our standard view of objects and rituals and make room for a new interpretation. This is also the case in Pathways.

The recurring elements that come together in Pathways, apart from the name of the show that Hiorns used before, are the theme of sexuality that he already discussed five years ago with his Sex paintings, but especially the copper sulphate. In 2008, this chemical solution led to Hiorns' breakthrough with the general public. The site-specific installation Seizure even earned him a nomination for the prestigious Turner Prize. 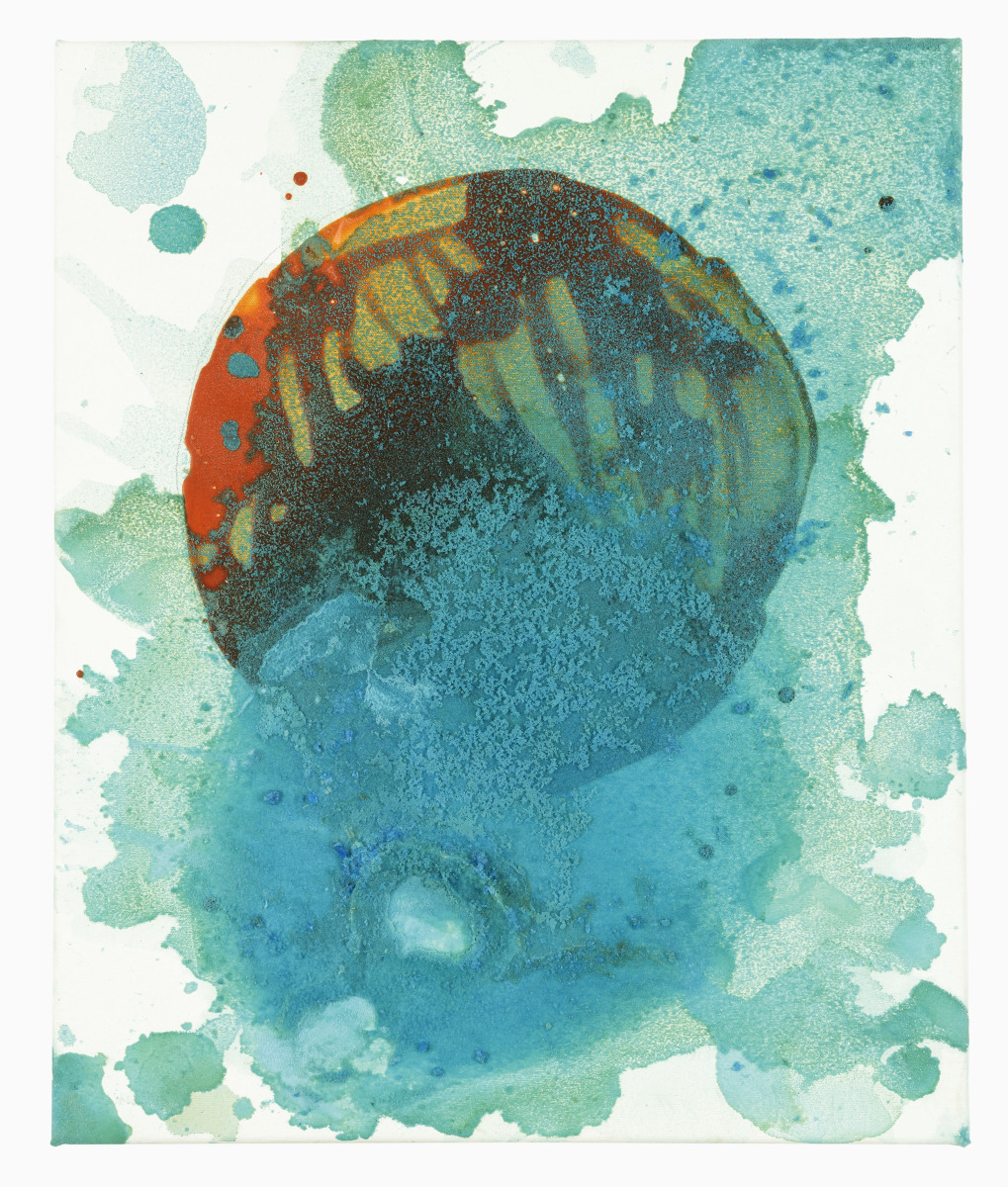 Seizure
A prime example of reusing and transforming a material is Seizure. For Seizure, Hiorns was given the opportunity to experiment with copper sulphate crystals in a vacant London council flat in a complex that was slated for demolition. Hiorns sealed off the house hermetically, then proceeded to feed the copper sulphate into the house using a process he developed himself, and waited. The result was walls completely covered by dark blue crystals.

Coincidence or not, the former council flat was in a neighborhood plagued by drug crime. Given the name of the work and the shape of the crystals, references to a drug lab or crystal meth were somewhat obvious.

When you stepped inside and left the decrepit post-war architecture behind you, you entered an alternate universe. A world that one could walk through and upon which you had an influence through your presence. By breathing in and out - copper sulfate is not a stable substance - but also by accidentally trampling crystals on the ground.

Pathways
Just as in the Sex paintings, large works depicting male eroticism completely stripped of references to romance or lust, in the new series of paintings we see human bodies or parts thereof. It is unclear whether men or women are depicted. In fact, Hiorns speaks of beings, entities without gender.

It is this ambiguity that he is after this time. Whereas in the Sexpaintings Hiorns reflects on the way in which a sexual energy is usually expressed, in Pathways he uses the sulphate to undermine figurative painting on a formal level while questioning our views on sexuality through the sexless beings. 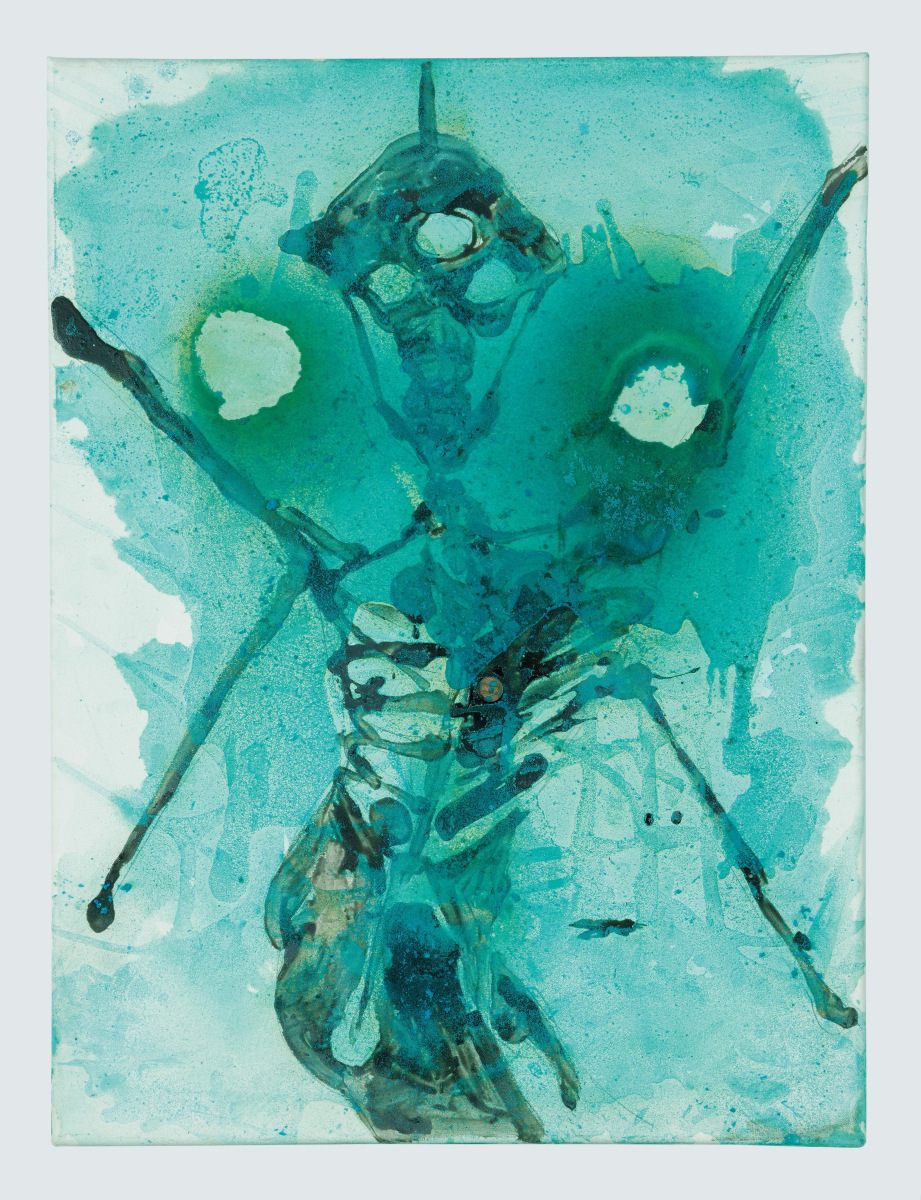 Common ground
Also, the canvasses seem to have a spiritual undertone. Quite a few of them are layered with copper sulfate in a circular shape, which makes you wonder if it is a primitive religious sign. And that seems not to be too far fetched, because The Bakery plays a video work that consists entirely of a church service of the Church of England recorded in Birmingham in the run-up to the 2016 Brexit referendum. It seems like a normal church service with readings, prayers and singing. With one difference: the choir is not behind the priest, but, dressed in blue habits, lies in front of her in the nave. 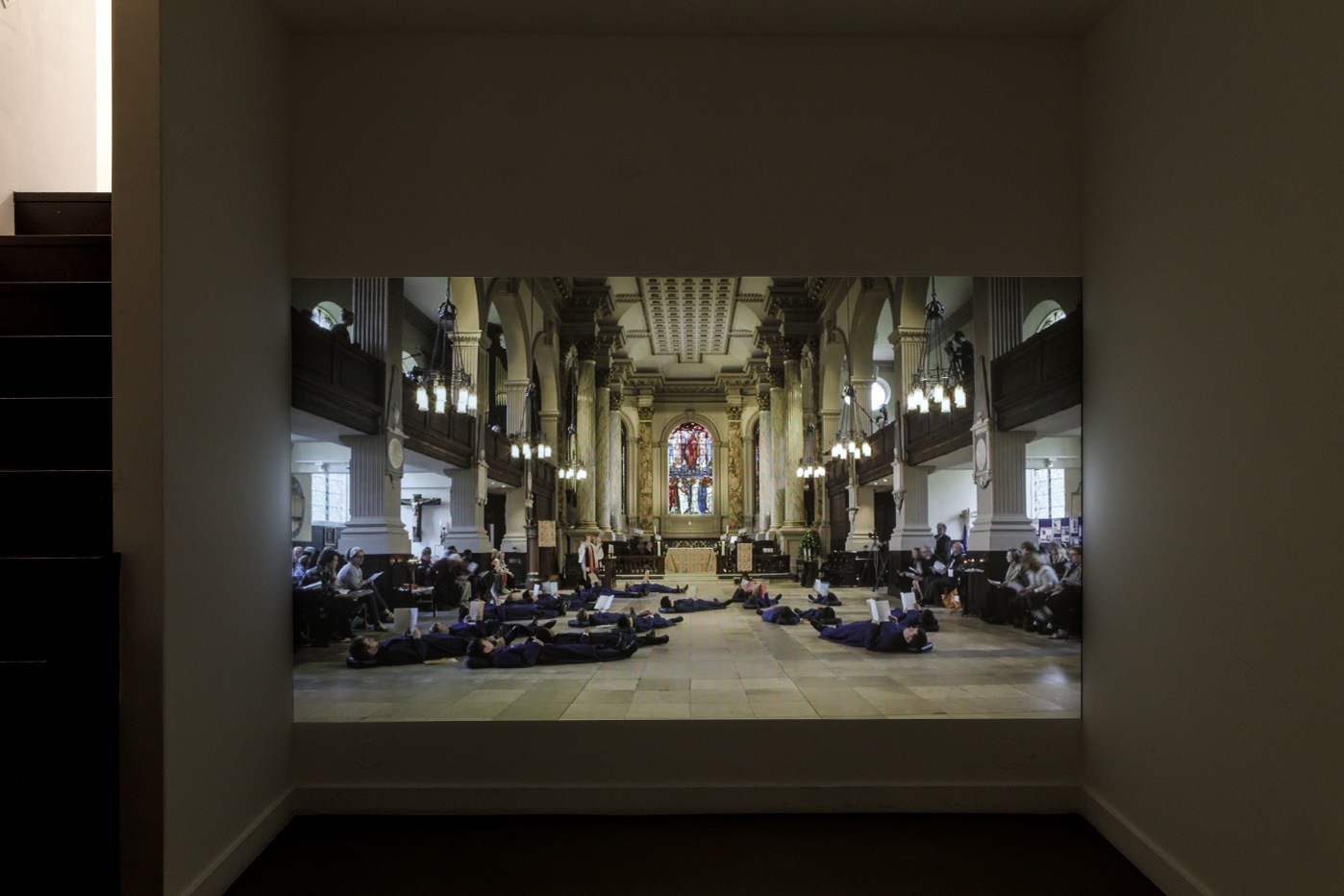 This relatively small intervention in an ancient ritual leads to a reflection on the role of horizontal connections in the Christian faith. “The choir lie on the ground, a place of humility”, says the minister. “The word humility derives of humus, of the ground. We share a common ground. What we do to the earth, we do to ourselves. We share a common air, what we do to the air, we do to ourselves. So perhaps, our hope for humanity lies in humility. In caring for one another and for the Earth. In human and humane relationships. God is with us in the humble and the horizontal.“ By breaking the ritual we remember why it has always been performed the way it was.