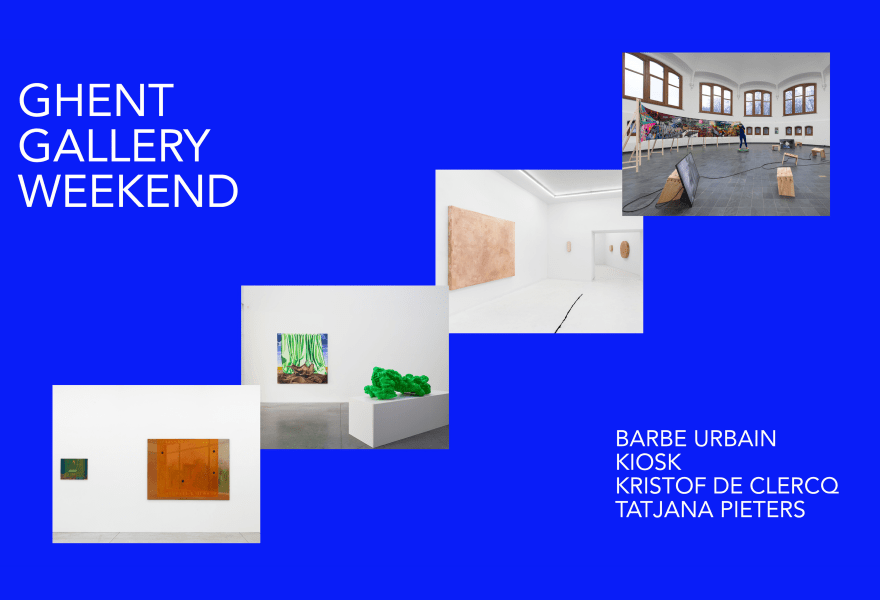 On Saturday 5 and Sunday 6 March, three Ghent galleries and the KIOSK art centre will open their doors. Enough reason to visit this beautiful city with its ancient warehouses, atmospheric Beguinages, Castle Gravensteen, the Vrijdagmarkt and its numerous restaurants and much more. Below you will find an overview of the exhibitions you can expect. The galleries and KIOSK are within walking distance of each other. 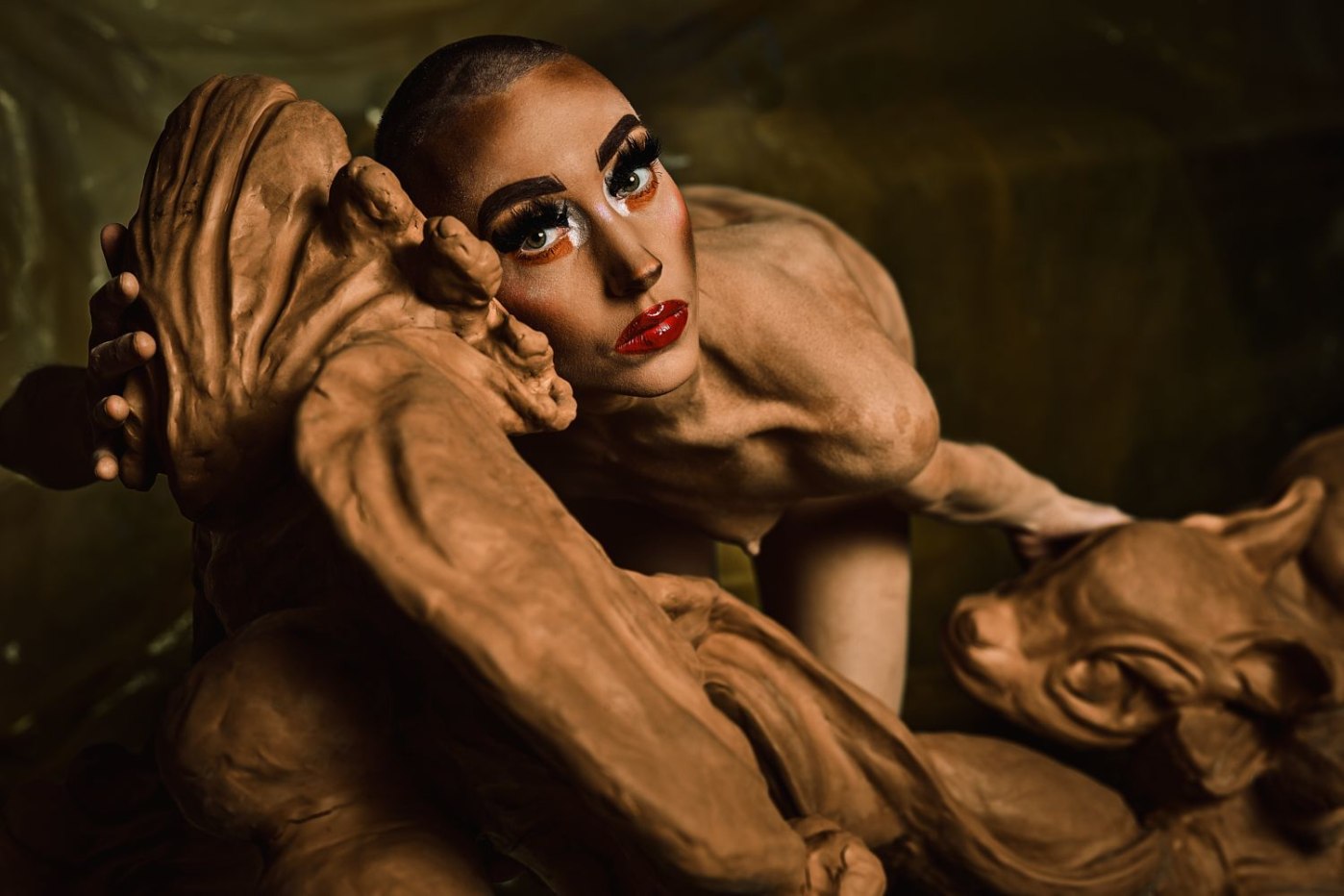 Tatjana Pieters shows Dolly Bing Bing: ‘Core of Bambi Dolly Bing Bing Ft. Stef Kamil Carlens, Wannes Cré & Neoza Goffin’
Carlens, Wannes Cré & Neoza Goffin' Tatjana Pieters presents two solo shows: 'Core of Bambi' by Dolly Bing Bing and 'Prolific' by Ilke Cop. As different as the practices of the two artists may seem at first glance, there are also many commonalities such as the performative character, and themes such as identity, feminism, sexuality and the complex relationship between personal and political themes.

Dolly Bing Bing is the alter ego of Elisabeth Van Dam (1986). She lives and works in Belgium and Brazil. Van Dam describes herself as a Gesamtkunstwerk: she makes pop music, sings, dances and performs; is a doctor of philosophy, mother and widow. She draws her visual work from these numerous influences and experiences, which can be regarded as a concentrated synthesis of her art of living. Like Dolly Bing Bing trains her own body like a machine, in her sculptures the line between the human and the machine becomes blurred. The visceral clay-like look they show in their early stages is covered by high-tech glossy finishes and colours reminiscent of cars, motorcycles or products from the world of sports and enhance their biomechanical character.

They form a shiny shield and disguise the vulnerability behind the muscles: an invincible machine on the outside, a vulnerable Bambi on the inside. 'Bambi's Heart' is a 3D print and video based on an immense clay sculpture. Created after the death of Dolly's husband, the sculpture consists of three figures: one that appears to symbolize death, a bridge figure with a Bambi head and a rococo-like shape representing energy and fertility, with a flower, pearls, sea foam and shell shapes. Wannes Cré made the video for Readiness is All (ft. Stef Kamil Carlens), which will premiere here. The scenography of the clip is by Neoza Goffin, a young artist to whom Dolly feels related. Goffin also shows an installation with photos. In her colourful work she explores the meaning and transformative potential of spirituality. 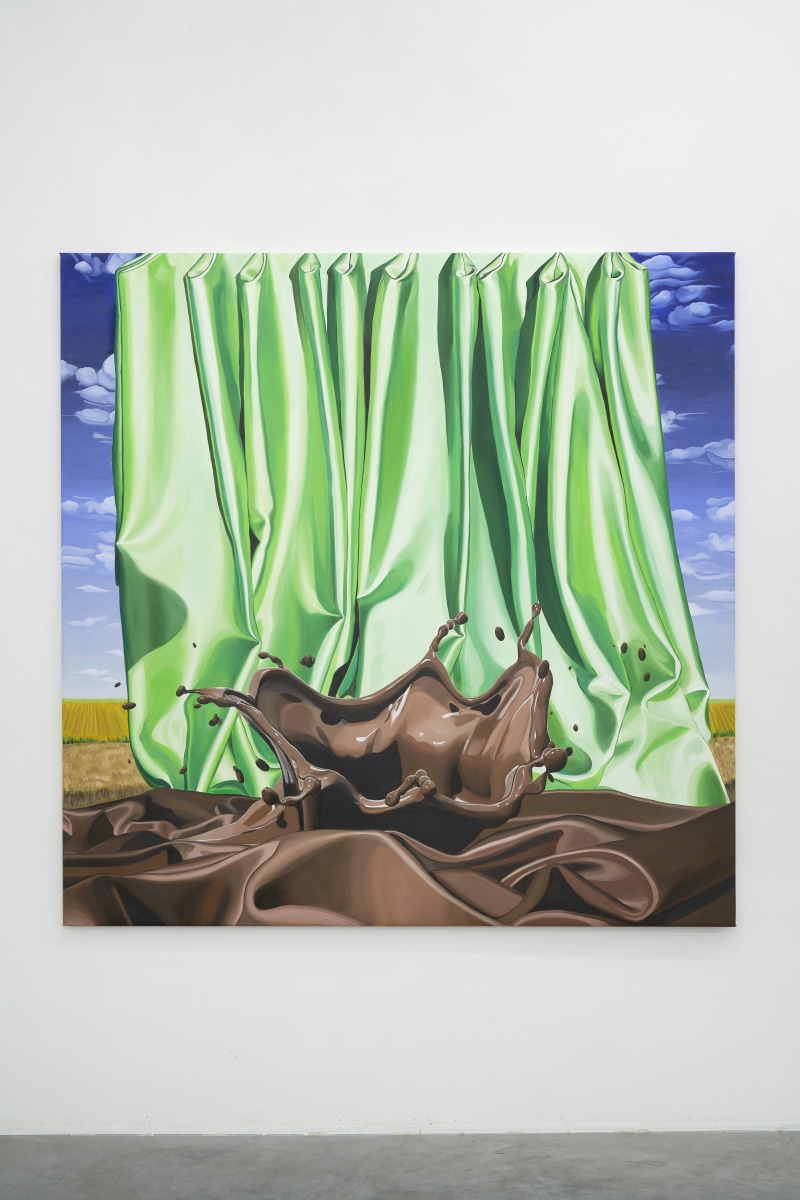 Tatjana Pieters show Ilke Cop: ‘Prolific’
Belgian artist Ilke Cop (33) lives in Brussels (Molenbeek) and studied fine arts at the University of Ghent and fashion design at the academy of Sint-Niklaas. Less than 2.5 years ago she started painting out of the need to make a statement as a female artist. Ilke: “The more I evolve as a person and artist, the more I notice that a female narrative is still too often missing […] All kinds of hidden processes lead to persistent prejudices. I have it myself, you have to dare to acknowledge that." Her paintings confront the viewer with the question of how image formation is influenced by (art) history and the ensuing privileges, prejudices and expectations. She questions themes such as feminism, colonialism and gender from her specific position as a white, privileged, female artist. “The question is always: how can I question a situation without depriving others of their voice?” 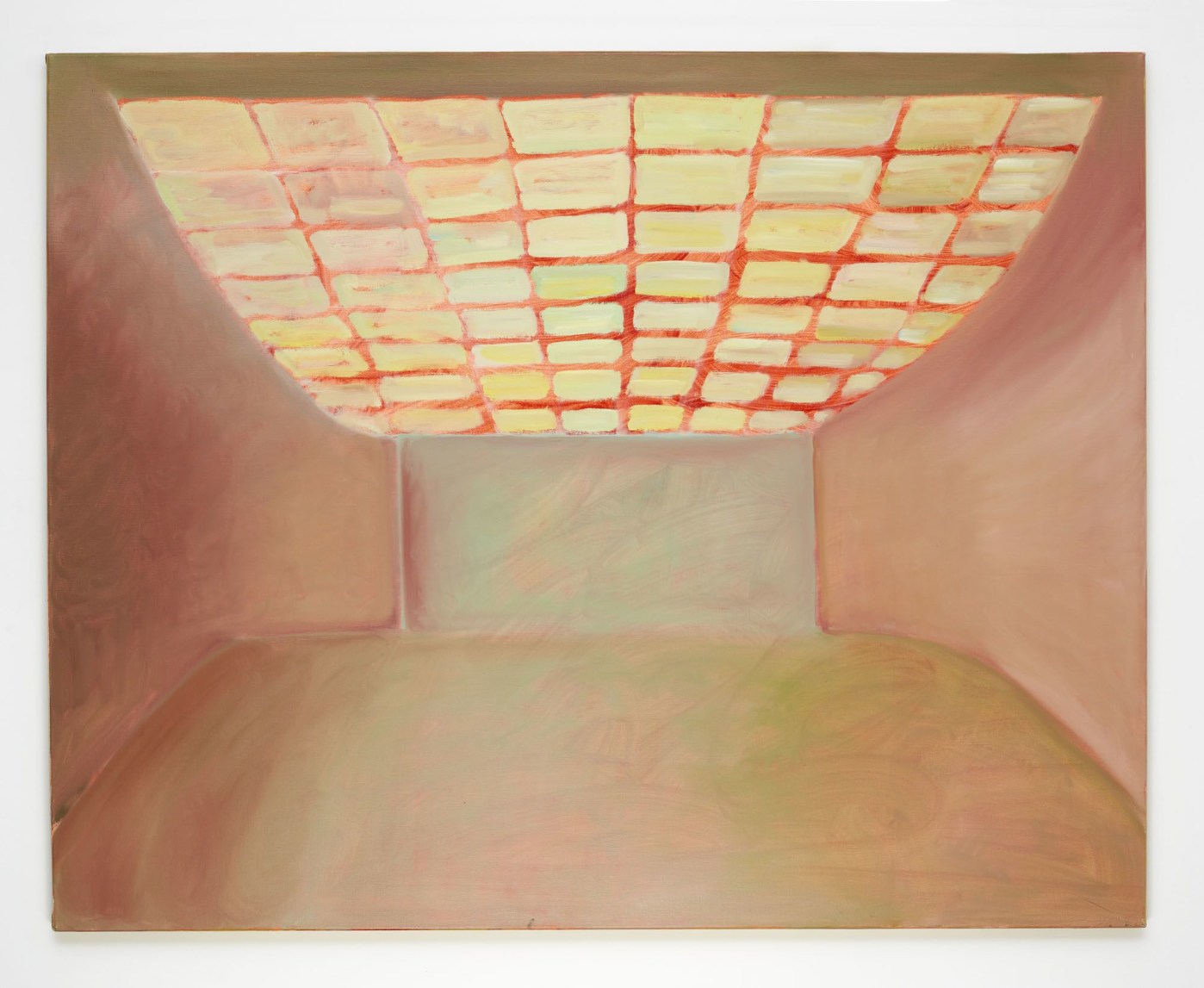 Kristof Declercq Gallery shows Agnes Maes: ‘Spaces and Landscapes’
In the 'Spaces and Landscapes' exhibition, Kristof Declercq Gallery shows a series of paintings by his mother, the artist Agnes Maes (1942-2016), who would have turned eighty this year. The exhibition shows a selection from the many paintings that Agnes Maes made in the period 1993-2014. The landscapes and interior spaces of, among other things, museums evoke a kind of existential, spatial experience in the viewer. It is not so much about the fidelity of the image, but more about its emotional impact. By blowing up details from paintings by, for example, Morandi or Edouard Vuillard, Maes emphasized the importance of emotion over that of the performance. With her desire for innovation, she was a true exponent of modernism in which the belief in progress is greater than the need to look back. Her very personal use of colour, the sensitive, intuitive brushstroke and the lush, tangible light make Agnes Maes' paintings extremely sensuous. 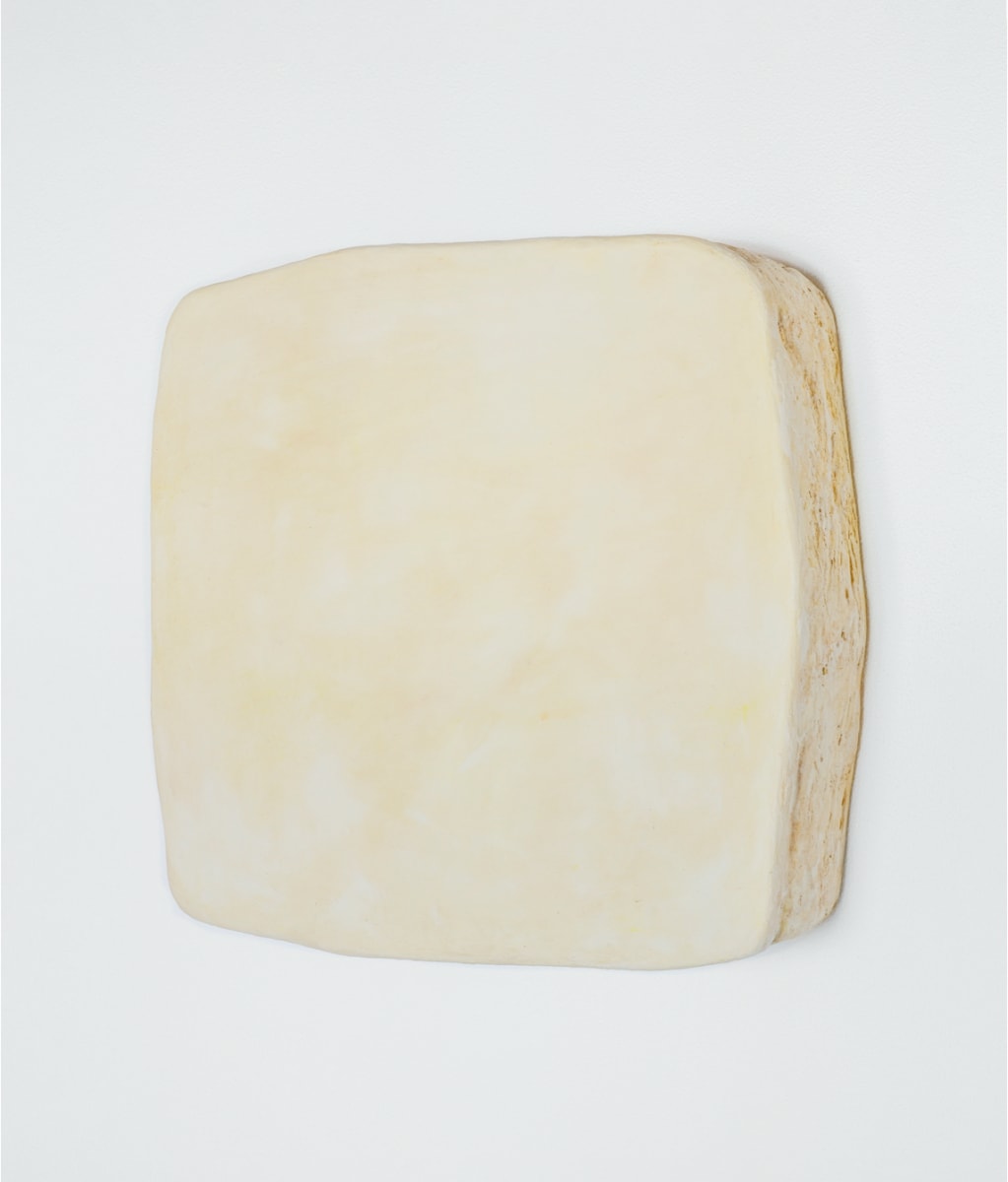 Barbé-Urbain shows Stan Van Steendam: ‘Down the Trail’
Bij Barbé-Urbain vindt momenteel de tweede solo tentoonstelling plaats van Stan The second solo exhibition of Stan Van Steendam (1985) is currently on display at Barbé-Urbain. The artist lives and works in Brussels and Lisbon. For the past two years, his work has been heavily influenced by the dystopian and desert-like atmosphere of Lisbon's Barreiro industrial area. His work reflects the intimacy that exists between the artist and his craft, his materials and the emotions and sensations evoked by his creations, sculptural objects and large-scale monochrome pictorial explorations.

Van Steendam is known for his monochrome and tactile wall objects that stretch the boundaries between painting and sculpture. These objects consist of a mixture of plaster, raw pigments, dirt, dust and ash on cardboard, sometimes covered with epoxy resin. He processes these materials with his hands into minimalist shapes that seem to have been pulled from the earth. He also makes free-standing, spherical sculptures that refer to natural processes in a similar way. Van Steendam's practice focuses on the deconstruction of the materiality of painting in order to control its traces and movements. His enigmatic, iconic and visceral work challenges us to re-examine existing ideas about tradition and modernity in art. Due to the calmness and silence they radiate, Van Steendam's minimalist compositions evoke a meditative atmosphere. In addition to the material construction of the surface, Van Steendam's art is the result of both a physical and a meditative process, in which the only instrument available to the artist is limited to his own, bare hands.

KIOSK show Elen Braga, Sofia Caesar, Fernando Marques Penteado: ‘Dear Yves,’
The exhibition 'Dear Yves,' which is currently on display at the Ghent centre for contemporary art KIOSK, presents work by the three Brazilian artists who all live and work in Belgium: Elen Braga, Sofia Caesar, and Fernando Marques Penteado. Their work in no way shows their national connection. Instead of a systematic thread, based on a shared background or a consistent consensus, they form a group with a loose, shared culture and some common references. Dear Yves is an exhibition born of the desire to be together and to experiment. The need to communicate with each other is expressed in the letter to an imaginary Yves (Yves is a common name in Belgium). Dear Yves, is an exhibition in which curators Laila Melchior and Simon Delobel wonder what identity is apart from shared nationality in times of migration and refugees.

KIOSK shows Thomas Renwart: ‘Golden Hour Faded Black’
The exhibition 'Golden Hour Faded Black' by the Belgian artist Thomas Renwart (1996, formerly known as: Les Monseigners) consists of two parts. inside and outside KIOSK. The outdoor work is the result of a collaboration between Thomas Renwart and Bert De Geyter, is set up in the garden, a first for KIOSK, and consists of 10 flags and 120 daffodils. This solo exhibition at the KIOSK is based on a 1807 poem by Briton William Wordsworth: 'I wandered lonely as a cloud', also known as Daffodils.

“Gardening and living have so much in common. We plant seeds and bulbs and then reap what we sow, without knowing in advance what the result will be. We can only hope that after the darkness disappears, we will rise again, just like the daffodils.”
Thomas Renwart

It is a light and cheerful poem that addresses various themes such as the positive influence of nature on the mind of man, the indifference of people towards the beauty of nature and finally nature itself just taking its course, or whether people are interested or not. In the solo exhibition, artist Thomas Renwart tells and depicts the origin of his fascination with daffodils and the hope they symbolize for him. Renwart is known for his sublime tapestries that excel in technical precision and innovation. At KIOSK he shows a different, more conceptual side of his work, namely sketches, diary fragments and prints on textiles. 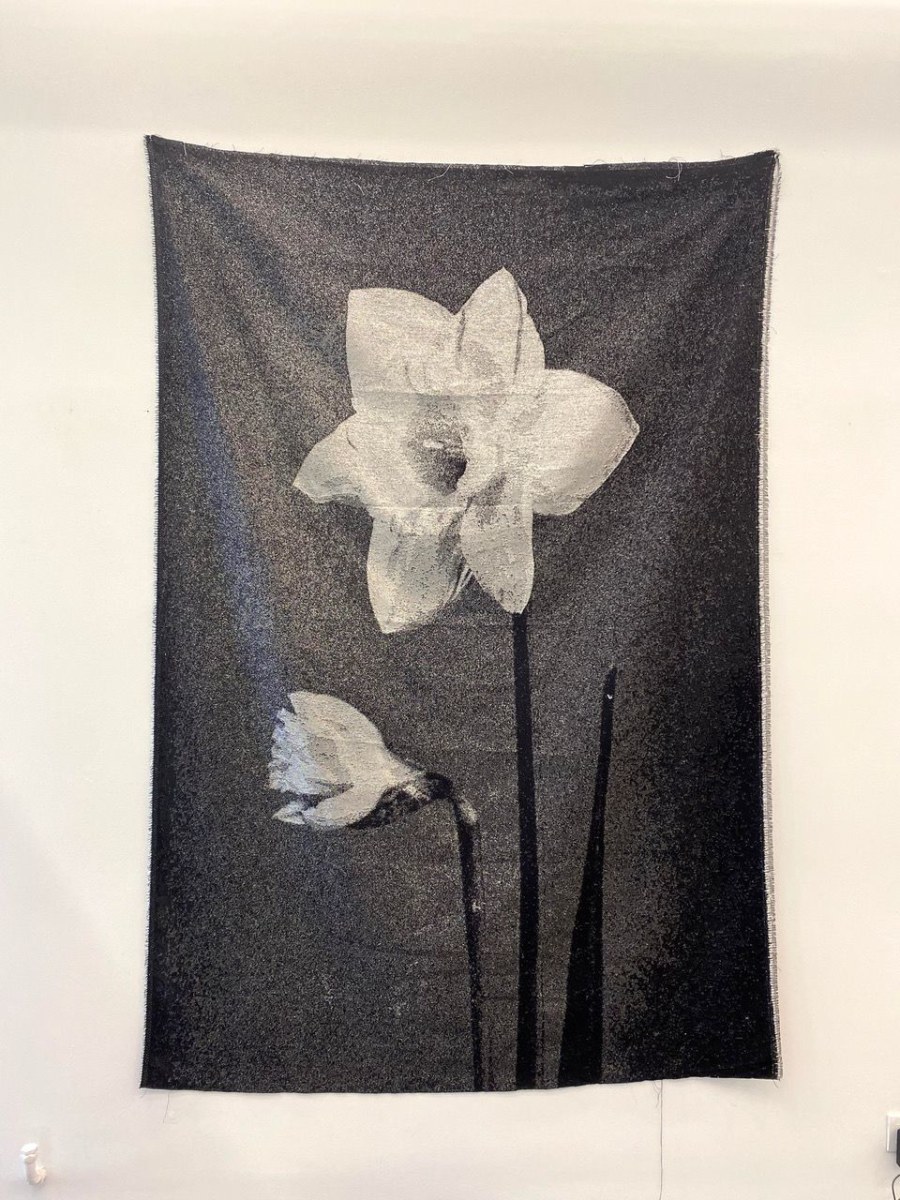