*The World According to Daniel Arsham by Jeff Rian*

In gouaches, sculptures, and conceptual objects Miami-bred artist, Daniel Arsham, synthesizes a future civilization, symbolized by its architecture, where a cold, entropic beauty empowers nature over culture, something like J.G. Ballard’s crystalline worlds, but where people’s lives can only be guessed at or wondered about from afar.

Meticulously painted, gouaches on Mylar recall modernist architectural drawings. White buildings, encrusted in saline icebergs, float in night seas, as in The M-House got lost and found itself floating in the sea, affecting salination [sic] levels in the North Atlantic, 2004. In his series, The Return, 2005, shards of staircases, piles of rectangular blocks, or rectilinear posts emerge like ghosts from leafy, green-blue overgrowth, as if a former catastrophe had subsided over the ages into a fragmented but purer world.

Chalk-white resin and cut-marble sculptures, and assembled models detail his highly aesthetic, hypothetical dystopia. Their style combines elements from organic art nouveau, F. L. Wright’s architectural drawings, art deco façades, surrealist dreamscapes, minimalism’s iconic transformation of building supplies, pop art’s combines and collages of pictures, and of course everything information technology can offer. Black and translucent paper and blue-plastic drop cloths are cut and layered into art nouveau panels. Sections of modernist buildings are encrusted in floating islands of white made in resin. Resin stalagmites and stalactites grow out of the ceiling and floor. Negative incisions are roundly cut into wall corners, as if eaten into them. In Pinch, 2003, miniature escalators climb to nowhere; in Regret, from the same year, a table-size parking terrace is built in the shape of its title; a So-Cal Schindler bungalow is modeled from Sheetrock and aluminum support studs; a truncated art deco cinema marquee falls over stalagmite heaps.

Modernism resides in these works like a ghost from an ancient history; its architecture is frozen in time. Modernism’s offspring, expressionism, pop, minimalism, and conceptual art—whose very names summon obsessions with psychological gesture, the commercially new, the objectively serious, and the conceptually imagined—have aged. Yet they convey the evolutionary code for his namelessly contemporary architectural mutations, his mixing of media and materials, and his visual drama, which is more like cinema or TV than modernist objects’ and their strict specificity.

Arsham’s stylistic multi-directionality might even seem erratic in modernist terms, and too historically divergent from pop, minimalism, and conceptual art. At the very least he presents warier edifices than, say, Gordon Matta-Clark’s Freudian cuttings. And his objects are far more estranged from human contact than, say, John McCracken’s planks and monoliths, which evoke an ethereal, extra-worldly intelligence, not an entire arbitrary world. But a different precedent is also offered in these vaster projected, post-postmodern, movie objects, and the cosmos they inhabit—where cosmic nature reigns supreme over Earth and us.

The blue-green world could also be viewed as a projection of progress following cataclysm. Modern art lost its renascent vigor in catastrophic wars. Artists turned psychologically inward as a result. Expressionists searched for art’s specially coded subject matter in its materials and their gestures. Pop art grew out of a postwar domestic economy that had turned nationalist politics into global commerce, antiquated the folk, and invented the nameless masses. The world became increasingly crowded and expensive. Apocalypse was envisioned in material obliteration and nuclear winter. Natural disorder increasingly threatened, the atmosphere became ill. But art proliferated by diffusing into the media like probes on missions in space.

In F. L. Wright’s amber-tinted architectural drawings, structures preside over the natural environments they respect. Ashram imbues his worldview with a futuristic aesthetic of a post-cataclysmic calm, a watery cosmos adrift from history. At the same time, the style represents decisions made in terms of art’s necessary adaptation.

The gouaches reminded me of Miles Davis’s ballad, “Blue in Green,” from his landmark 1959 recording, Kind of Blue, where mode replaced melody and the improvisations were based on color-like modulations. The ballad turns around bluesy dominant and softer, “greener,” melodic-minor modes, speeding up during the improvisation, but never managing the standard turn-around ending. Its ending was forced. Ashram’s gouaches and objects exhibit an odd precariousness, something like Davis’s ballad, where means don’t imply ends because of a stylistic decision and a change of attitude. Ashram’s modal adaptation seems, to me, based on modal aesthetics and different blends of familiar information, such as uninhabited architecture set in shades of white, blue, black, and green. Modern and postmodern art retained authority over objects and images through established stylistic affinities. In pop, minimalism, conceptual, and even land art, a world outlook was based on such a relationship to objects and to nature, which was referred to as the sublime, and which entwined power and beauty in an aesthetic of objective disinterestedness. Even wary scientific modernists like Robert Smithson, who wanted to recover ravaged industrial parks, held onto a modernist view of the specificity of objects, but with a more remote sense of time and history.

In Arsham’s strangely beautiful, hypothetical world objects have lost their physical domination, but not their aesthetic power. The guts and visceral engines of industry are imagined away, buried in his aesthetic transmutation. Remaining is a resplendent stylistic modality and a beautifully forced end to be contemplated. Daniel Arsham is represented by Galerie Emmanuel Perrotin Miami/ Paris. He has taken part in a number of well-received group and solo-expositions in the States and in Europe. His work has been included in a range of high-profile collections such as that of the Museum of Contemporary Art, Miami and the LVMH Collection and he has collaborated with visionaries such as Merce Cunningham and Hedi Slimane. 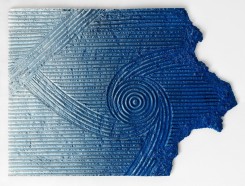 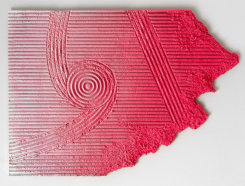 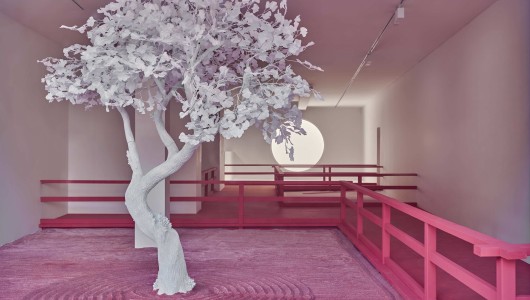