“Cercle et Carré”: Post-war and contemporary interpretations of the perfect circle and the imperfect square 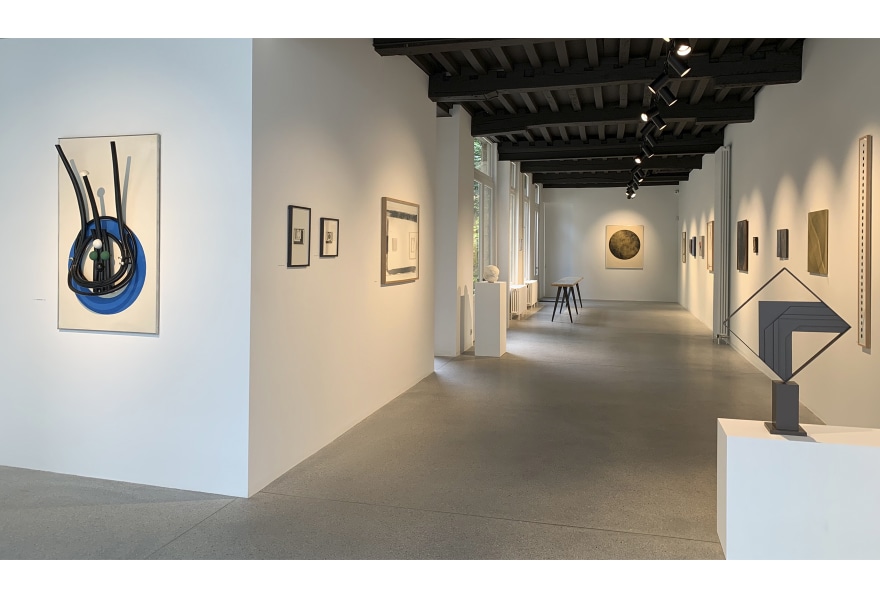 The most recent addition to the GalleryViewer platform is Callewaert Vanlangendonck, located in Antwerp, with an office in the Wolstraat and a special Collection building in a 17th-century building on the Sint-Jacobstraat. The gallery was founded in 2012 by Yoeri Vanlangendonck and Brecht Callewaert, stemming from an intrinsic appreciation for Belgian post-war abstract art. The founding of the gallery preceded the noteworthy revaluation of this art genre by museums, that has been taking place in the past few years. Belgian art has long been synonymous with Flemish expressionism and the surrealism of artists like René Magritte. But even after the Second World War, Belgium knew a lively avant-garde scene with a focus on abstract art. Vanlangendonck: “At the time, Belgium played a significant and perhaps somewhat underestimated role within the international avant-garde. Abstract art flourished here, from the fifties and sixties onwards. There were many movements at that time, such as G58 and Raaklijn, that were active and groundbreaking.”

Until September 1, GalleryViewer will show the online exhibition ‘Cercle et Carré’ The title of the exhibition (literally translated as 'Circle and Square') refers to the eponymous historical avant-garde group that was founded in Paris in 1929 by the Uruguayan painter Joaquín Torres García and the Belgian artist and art critic Michel Seuphor. In their own magazine "Cercle et Carré”, they brought together constructivist artists on an international level. In 1930, they organized a large-scale exhibition at Galerie 23 in Paris, which included 130 artworks by abstract artists such as Hans Arp, Wassily Kandinsky, Sophie Taeuber-Arp, Le Corbusier, Mondriaan and Fernand Léger. In 1933, the movement merged into the Abstraction-Création group. But after that, Seuphor in particular (a close friend and first biographer of Mondriaan) championed the second generation of Belgian artists who worked within the abstract tradition after the Second World War.

The reasons behind choosing this international artists' collective as the starting point for the gallery exhibition are twofold. On the one hand, the exhibition serves as a tribute to Seuphor as an art critic. On the other hand, it serves as an overarching framework in which the work of contemporary artists — who also work with geometric shapes like circles and squares — enters into a dialogue with the work of various post-war artists. The exhibition also plays with the contrast between the perfect circle versus the imperfect square. Moreover, contemporary artists such as Jef Meyer, Ayrton Eblé and the artists duo Daems van Remoorte work from a familiar visual abstract language, while making use of new techniques and materials such as laser printing.

The practice of Callewaert Vanlangendonck is often art-historical in character: the exhibitions often show additional archive material, old photos and posters. In addition, the gallery has published several monographs and artworks by major post-war artists are on permanent display in the gallery. Moreover, the gallery is known for thinking out-of-the-box: after Guy Vandenbranden passed away in 2014, the gallery organised a double retrospective in collaboration with Delen Private Bank, resulting in dozens of works on display in several bank office buildings in Antwerp.

Note: Note: although strictly speaking, there is no lockdown in Antwerp at the moment, local measures have been taken to control the spread of the coronavirus. The Dutch government recently issued a negative (orange) travel advice for the Antwerp region. Look online for the latest information.