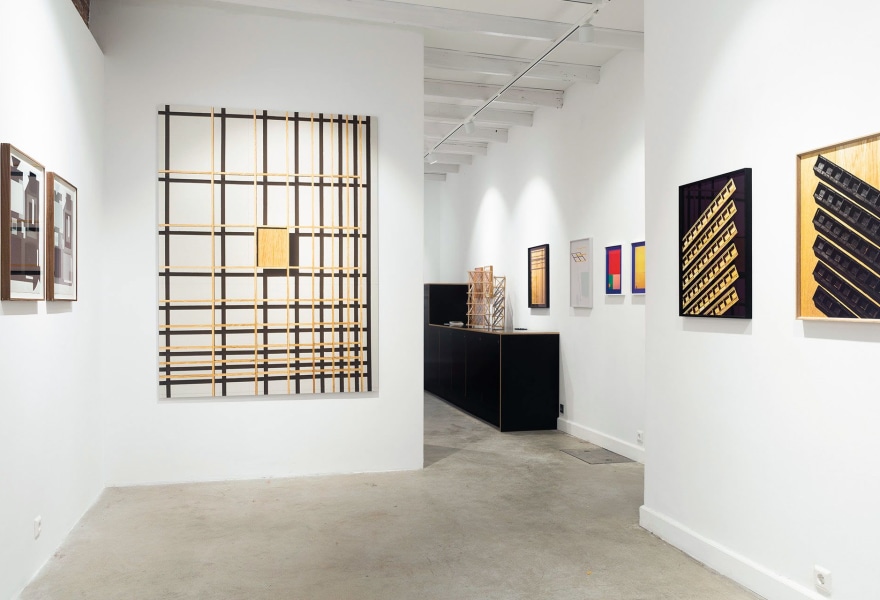 A line, a grid, a knot, Galerie Caroline O'Breen

Caroline O'Breen presents A line, a grid, a knot, the first gallery exhibition of Bart Lunenburg and Chaïm Dijkstra. Two young conceptual artists who complement each other well. Lunenburg photographs oak models with architectural references, while Dijkstra shows us how a camera captures the world.

It is no coincidence that Bart Lunenburg (NL, 1995) invited Chaïm Dijkstra (NL, 1990) to participate in his first gallery exhibition. The two were classmates at the Utrecht School of the Arts and have more in common in terms of working method than you’d expect based on their work. Lunenburg's practice levitates somewhere between photography and sculpture. He sometimes works months on end on his oak models referencing architecture, while Dijkstra must have just as much patience when developing his special reproduction processes.

The fact that Lunenborg was scouted by gallery owner Caroline O'Breen is hardly surprising either, because his work fits well with the kind of photography that O'Breen likes to present. Conceptual work captured with a photo camera, think of the work of Jaya Pelupessy (also HKU) and Laurence Aëgerter in the past.

O’Breen: "I like photography that makes experiment visible in the work, and that dares to think outside the box and push the boundaries of the medium." 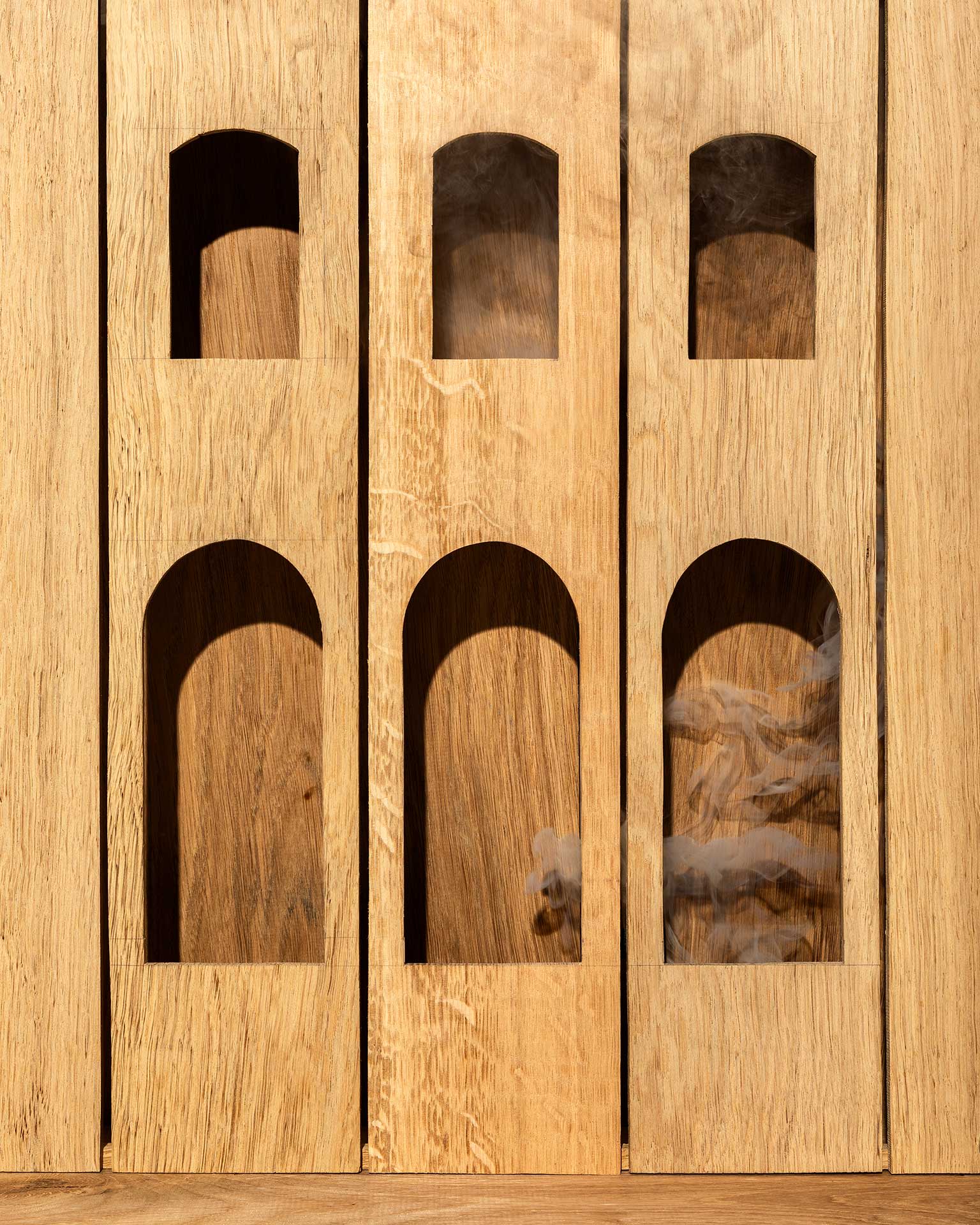 At the last edition of Art Rotterdam, O'Breen showed Lunenburg's work for the first time. Since then, his work has been shown in five more places throughout the country, including the Maarssen estate of Doornburgh. There, among other things, Study of a window can be seen. The model for this work consists of a framework that is based on the plastic number theory of Dom Hans van der Laan. The theory based on a special relationship with which a whole series of interrelated relationships are related. For his theory, the monk-cum-archictect and founder of the Bossche School was inspired by the different sizes of windows within a tartan pattern. Van de Laan implemented his theory to regulate the amount of natural light in rooms, among other things.

At O'Breen you can also see Lunenburg’s new series The Healer, which arose from research into the relationship between architecture and epidemics. “In the past, poor urban planning has made us sick, but has also produced architectural innovations. The Healer is about medieval ways to contain plague epidemics. In it I also link to the present in an abstract way. Many of the measures that were taken centuries ago, where also implemented during the corona pandemic. Of course, a lot has changed: medical science has taken off, more attention is being paid to ventilation and clean air, but the principle has remained the same: quarantine.” 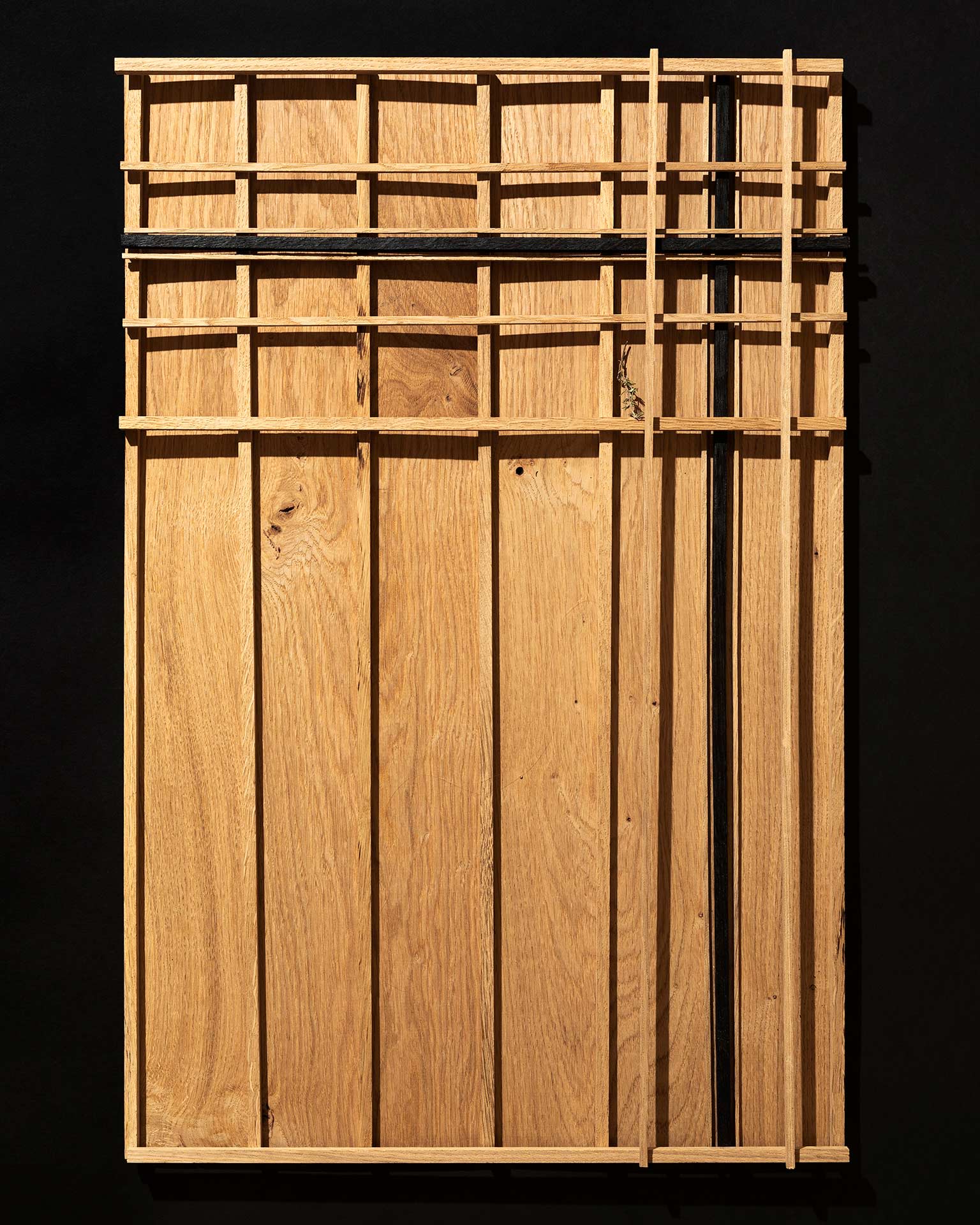 The starting point for The Healer was the Utrecht Catharijne Monastery, which now houses the Museum Catharijneconvent. In the 16th century, the monastery served as a hospital, among other things. In a work like The Healer 14 (cloth / thyme), the architectural reference is still clearly visible, but in the other works the reference is less clear. Lunenburg: “By making models, it transforms into something else. The model may still have a link to a specific building, but it is an abstraction." 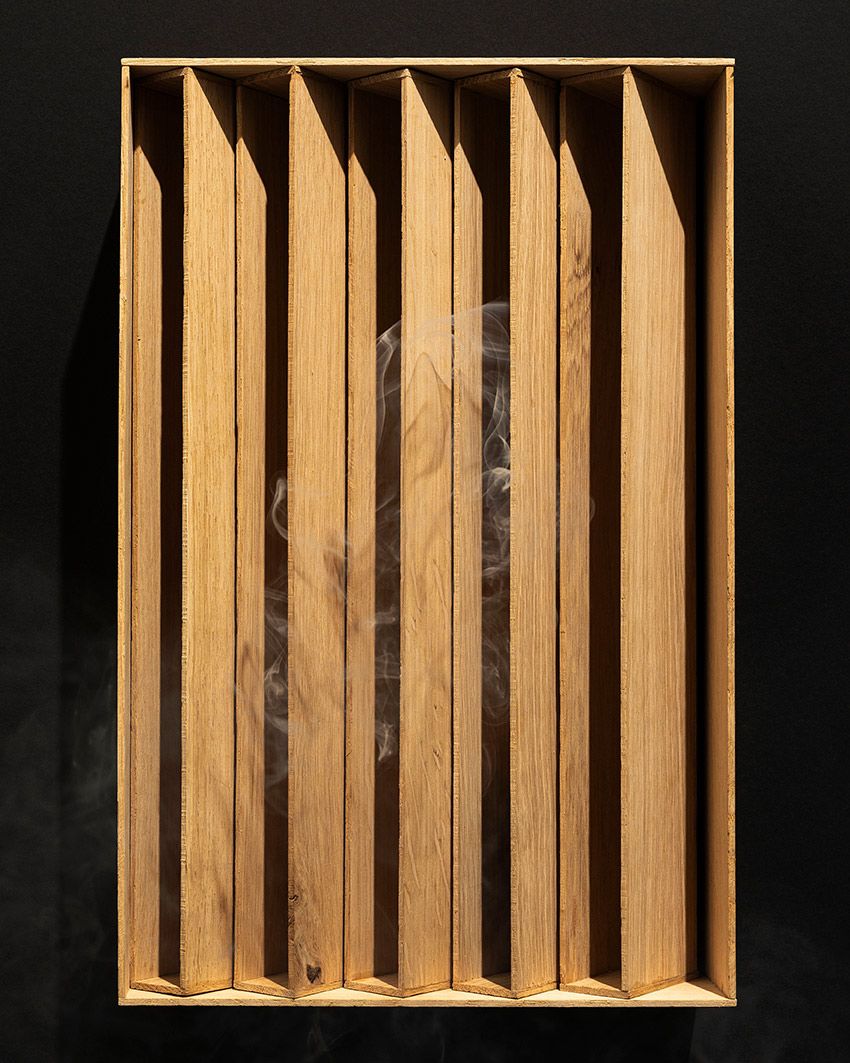 Lunenburg: “With a work like The Healer 2, I have slightly toned down the architectural reference slightly and turned the model much more into an object. In this case, it resembles an organ or a self-breathing organism.” 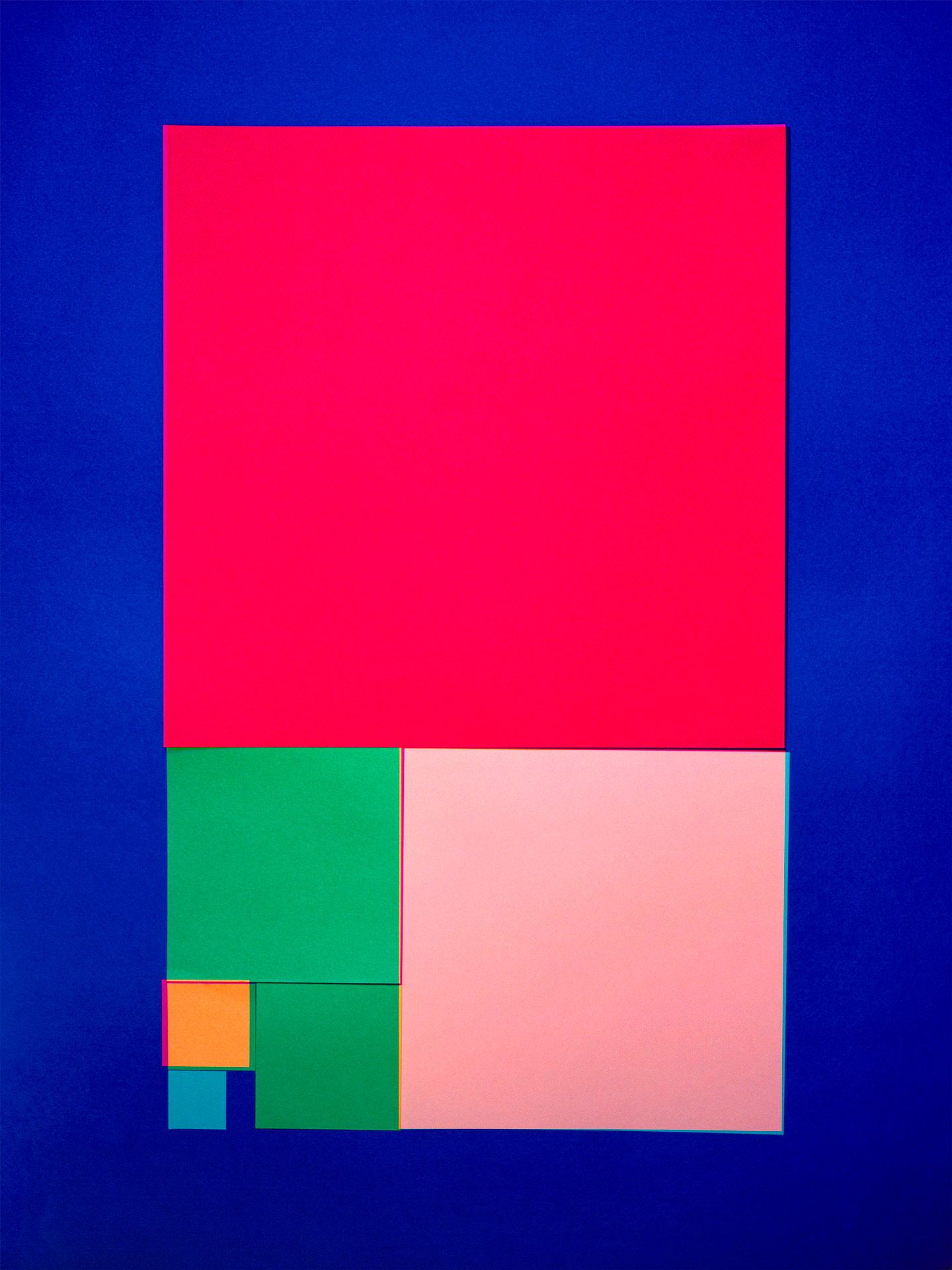 Everything is made right in front of the camera
“You don't necessarily have to comprehend it. If you sense that there’s something slightly odd about my pictures, I’ve already achieved my goal”, says Chaim Dijkstra about his work. You don't need to be able to follow him on a technical level, Dijkstra's job is to raise awareness of the direction a camera gives to images. “My work is about how a camera looks and how a camera captures the world around us. It's kind of a mechanical analogy of the human eye. There is also the perspective, the point of view from, only a camera.”

DThe overlap with Lunenburg's work is that there is no 1-to-1 relationship with what the photographed composition looks like in reality in Dijkstra’s work either. While Lunenburg does not replicate the Catharijneconvent in his models, Dijkstra does so with paper compositions and reproduction processes. 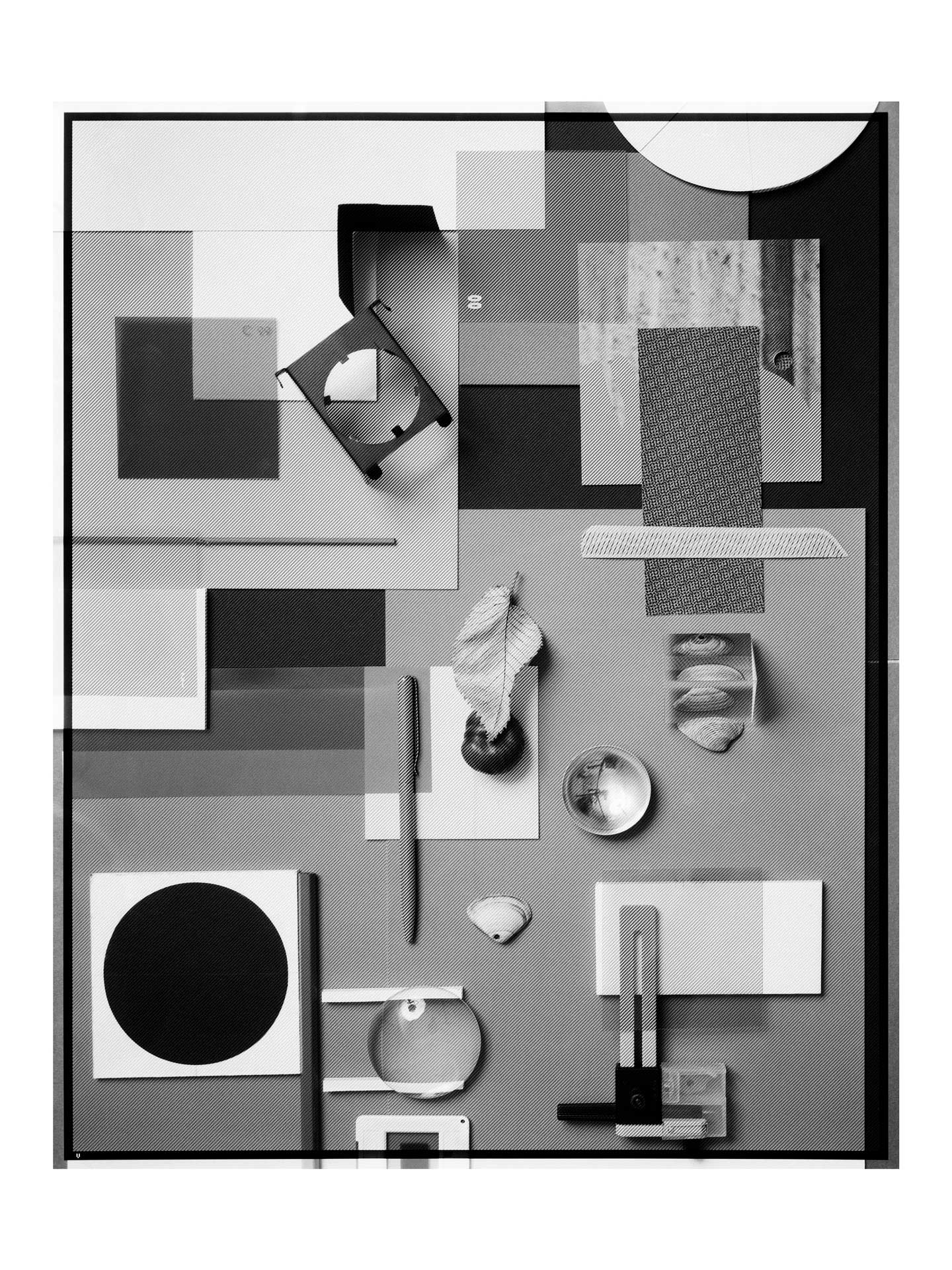 “Everything is made right in front of the camera”, says Dijkstra, referring, among other things, to compositions in the Colour still life series. The compositions consist of paper squares for which the negative has been exposed three times. Once with a green filter, once with a red one and once with a blue one. To allow the colors to be mixed, Dijkstra removed a number of squares per lighting. He placed them back by touch for the next exposure, so that they are sometimes just not completely straight and cracks appear at the edges. “You are looking at a reality that didn't exist, or only existed in the camera. That is what I find so interesting about photographic reality, you can force it.”

A line, a grid, a knot by Bart Lunenburg and Chaïm Dijkstra is on display at gallery Caroline O'Breen until 10 December