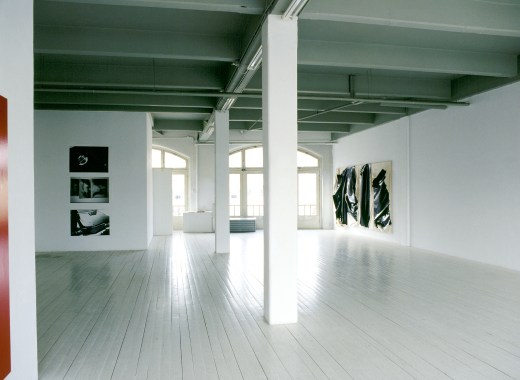 The gallery has made an exquisite name due to bringing artists into the spotlight at an early stage, who now thirty years later enjoy world fame and are very high on rankings like e.g. Artfacts.net: John M Armleder, Sylvie Fleury, Steven Parrino and Olivier Mosset. Artists of this generation such as Kristján Gudmundsson, Sigurdur Gudmundsson and later Hreinn Fridfinnsson worked in Amsterdam and contributed to the profile of the gallery. Well-known but underexposed artists such as JCJ Vanderheyden and Henk Peeters got a remarkable boost here after their first solo exhibition. Dutch artists such as Klaas Kloosterboer, Lily van der Stokker and Marijke van Warmerdam also started collaborating with Galerie van Gelder at the beginning of their career in the 1980s.
A new generation of artists from the Netherlands and abroad can be seen regularly in the gallery: Nicolas Chardon, Elvire Bonduelle, Salim Bayri, Kimball Gunnar Holth, a.o.
In 2012 a multiple and edition website was launched: https://www.thearchiveislimited.com and covers by now about 1000 artworks sold as an edition.

'The greatest miracle in the visual arts is the relationship between seeing with the eye and seeing with the brain. If a work of art gives a beastly retinal blow, you want to keep watching. That pure vision immediately switches to the question of where in the work the tick is distributed and what is going on with the work as a whole.' KvG