London born in 1958, Ray Caesar is an international well- known artist, undisputed leader of Digital Art. He has worked in several fields, attended many art schools, and realised building project works for architectural studios, agencies of digital technique, computer modelling, digital animation and has also made visual effects for both television and film.

Each one of his works is like a little piece of a big puzzle. Like Mary Shelley who deconstructs the human body in order to reconstruct it, so does Ray Caesar. In his creations he gets together fragments of decorative styles and architectural ages to give birth to a timeless beauty. In this mix of Art Deco, Victorian style and visual codes from the early 1900’s, his works really stand out for their personality and charm. Absolute master of digital technique he is a reference point to all the artists who faces this artistic discipline. Caesar works in Maya (a 3D modelling software used for digital animation effects in film and game industries), using it to create his figures as well as the virtual realms in which they exist.
Artworks
Media
Highlights
Recommendations
Collections
Shows
Market position
CV 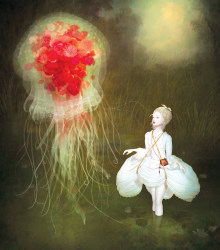 Collected by the Hearst Family; Riccardo Tisci of Givenchy; Madonna; the Bristol Museum, UK & selected by the Board of Trustees of the Museum of Modern Art, New York & Guggenheim, New York through affiliated auctions.