The works of Kirsten Hutsch investigate the relation between the real and the image.
It is an inquiry into the nature of human perception and the substance of reality. Her current work represents an ontological move away from postmodernism, embracing a new form of materialism, in which the status of the object in its actual, material and sensory ambiguity is acknowledged. In her quest for catching the Real, the conventional methodologies of depiction are subverted to bring about a specific reality.

Kirsten Hutsch lives and works in Amsterdam. She graduated with a degree in Fine Art from the ABK Maastricht and studied at the Rijksakademie in Amsterdam.

About some of her most recent projects:

THE LINEN SERIES
These works show a seemingly unpainted painting, which is in fact, a painting. After concealing the canvas with primer like a conventional painting prepared for a new depiction, the linen threads are painted back on using a tiny brush, warp and weft, string for string. By doing so the painting is given back its origin, creating an anti-image – a paradox. These paintings pose an auto-logical question in a sense that they possess in themselves, the very quality they depict. Object and subject are one and the same.

REMOVED GESSO
For these works, conscious and lengthy steps were taken to eradicate gesso from the pre-primed canvas, laying bare the linen underneath. The peeling off is of an archaeological nature: it brings back properties of the object that are usually hidden beneath the surface. A method that reveals the ‘real’ and in doing so, simultaneously creates the image.

In the transfer paintings, the original painting is reconfigured onto a canvas twin. For these works, gesso was peeled off one canvas an the pieces were glued back onto another other. As such, the image created, describes and translates its own process.
Artworks
Media
Highlights
Recommendations
Collections
Shows
Market position
CV 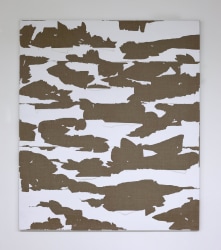 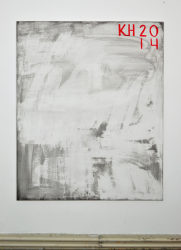 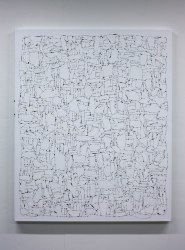 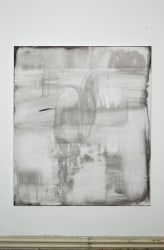 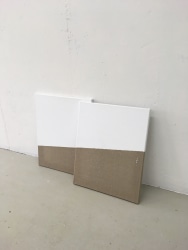