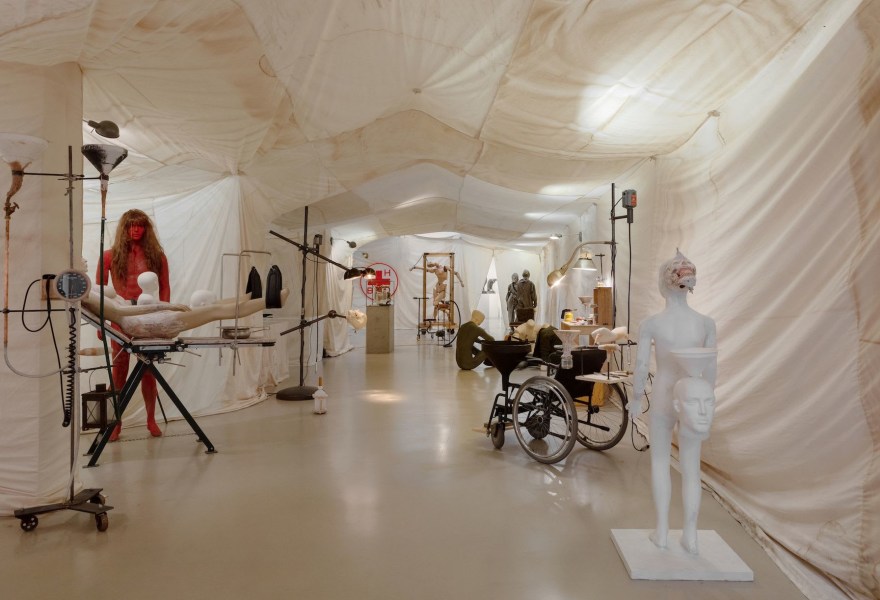 For EHBO (Acronym for First Aid), Atelier Van Lieshout's first solo exhibition at Galerie Ron Mandos, the Rotterdam artist set up part of the gallery as a field hospital full of archaic devices, dilapidated tools and old mannequins. EHBO displays human nature under extreme conditions and packs systemic criticism into a disruptive, sinister and at the same time hopeful spectacle. “Do you think it's creepy? With me the glass is always half full. I like to tell myself isn’t it nice that you can get help."

It takes a while before you realize where you have ended up when you enter the gallery on the Prinsengracht. The walls and ceilings of the front space are completely covered with large, yellow-brown cotton cloths. Any natural light is absent. The room is filled with medical devices that seem to come from another era. Welcome to the First Aid of Atelier Van Lieshout.

Throughout his career, Joep van Lieshout (NL, 1955), artist and namesake of Atelier Van Lieshout, has not shied away from major themes such as power, religious, philosophical and economic systems, sex, life and death. EHBO is no exception to this as the exhibition treats the viewer to the entire spectrum of human experiences. 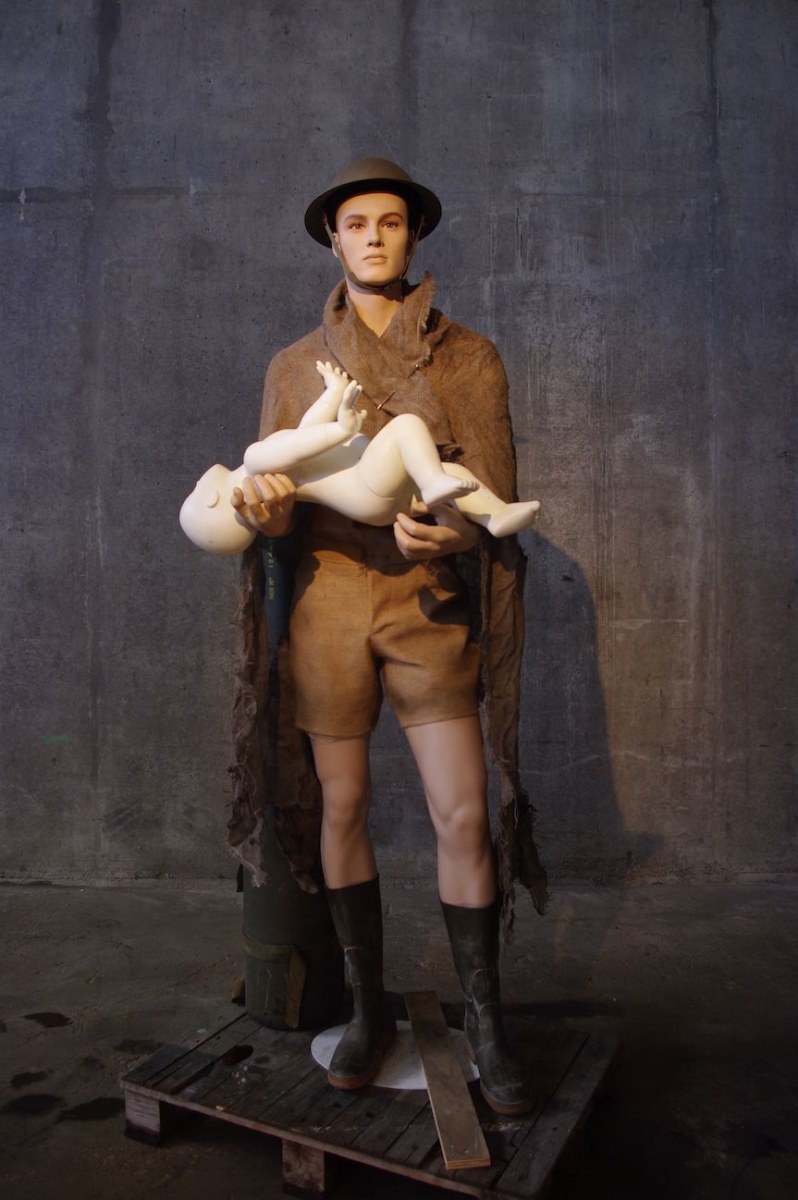 In addition to the surreal field hospital, there is a sculpture garden in which post-human sculptures are mixed with religious iconography, dealing with the themes of compassion and friendship. Such as the sculpture Soldier with Baby in which a life-size soldier holds a naked baby. The most eye-catching statue is called Green Madonna. It is a sculpture of Mary with child on her lap, in which one of her hands has the shape of a hammer. 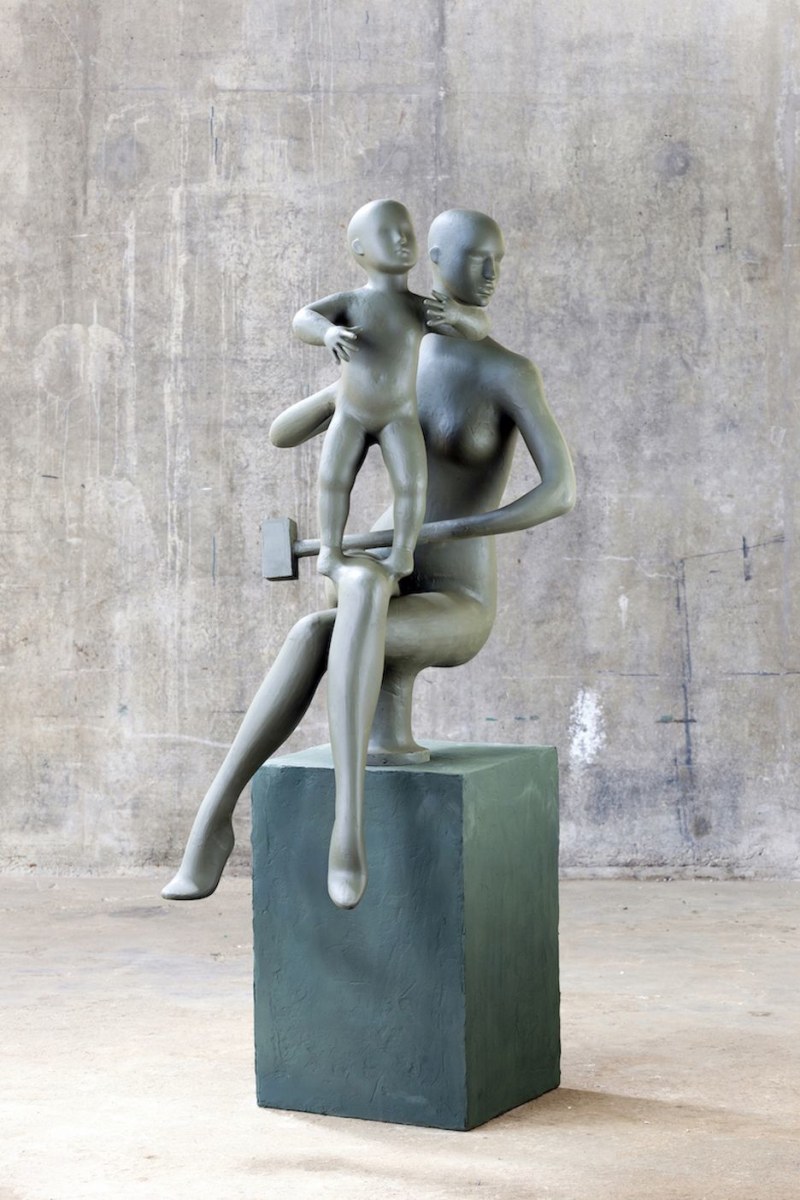 A setting such as a field hospital is the obvious choice to broach such major themes. The idea is that during a war or a crisis, the true nature of man emerges. Both its bad and its good qualities. The field hospital is the hectic crossroads where hope and loss, power and impotence, medical progress and decline converge. In Van Lieshout's field hospital, the sculptures appear archaic and DIY-like, which means that the viewer would probably situate them in the First World War. Atelier Van Lieshout’s parallel universe gives way to cruelty and betrayal, but the message is much more layered than that.

With EHBO, Van Lieshout returns to a familiar theme: medicine. It runs like a red thread through his oeuvre. Van Lieshout is particularly interested in how the medical world sees the human body as something that can be repaired and improved, but also serves as a raw material for experiments that are motivated by a disproportionate urge to innovate.

Also, the EHBO field hospital is not Van Lieshout's first hospital. In 2001, he already made a semi-functional hospital for his free state AVL-Ville and later he made a fully functioning clinic for Women on Waves. At the time, Van Lieshout's graduation project was an operating table. “In 1983 I made my first operating table, in which you could already see the The Good, The Bad and The Ugly of medical science theme. On the one hand, she strives to improve and save lives, on the other, my table was also a perverse chopping block with built-in stiletto knives.”

EFirst Aid has a similar sub-text. Immediately at the entrance is a do-it-yourself incubator with a doll in it. Van Lieshout: "I find the fact that you can keep a child alive with do-it-yourself materials, things you have lying around, Perspex plates, sewer pipes and fans comforting and hopeful." 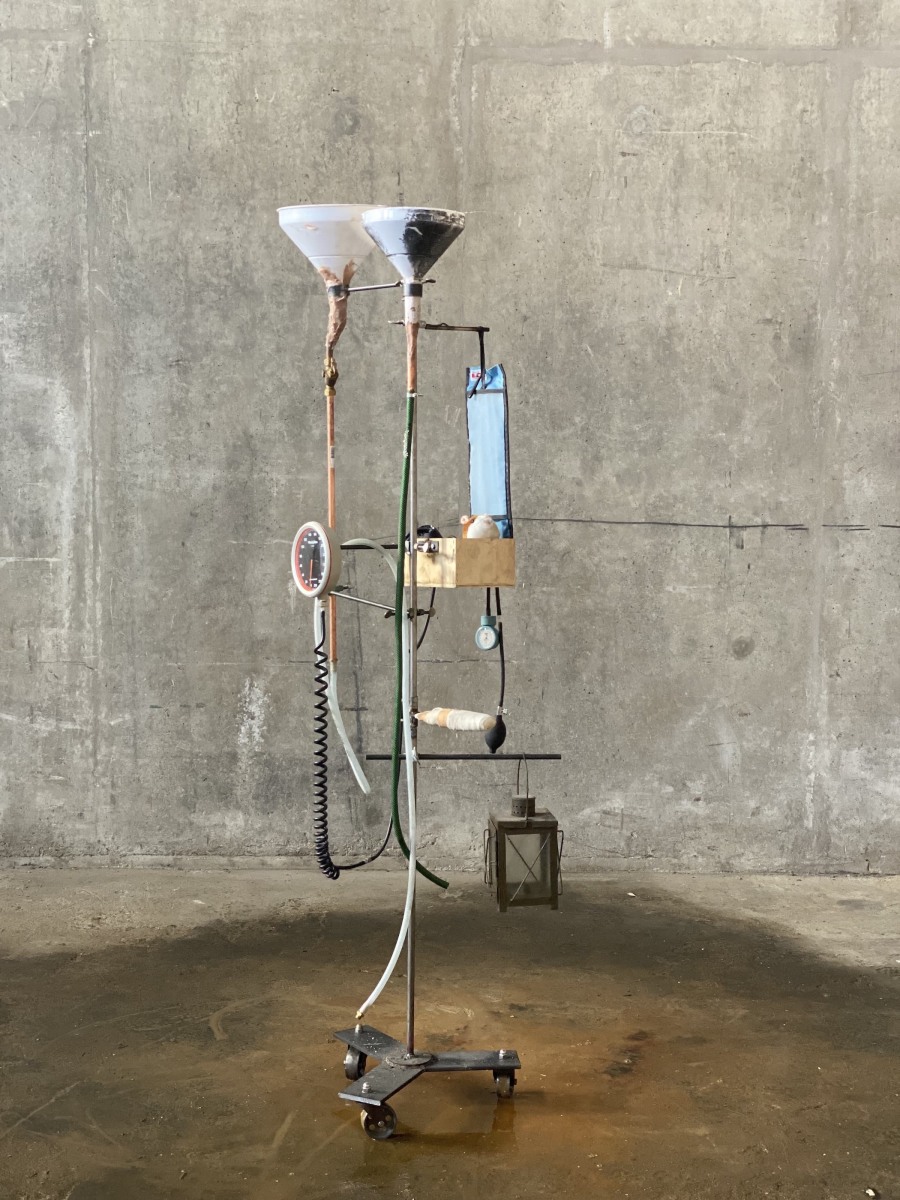 Next to it is a dated IV pole that AVL has modified in such a way that you can comfortably spend your last days: “It simply contains all of life’s primary functions: food, drink, an enema, a blood pressure monitor, a light and a hamster. You just have everything you need with you. So you can walk towards your destiny, because you have with you everything you can no longer do yourself, until you disappear from this earth, including your companion”. Van Lieshout speaks of “an exceptionally positive work”. It begs the question whether medical science is not exceeding its goal by endlessly stretching the malleability of life.

Medical science’s belief in the malleability of life and the urge to experiment is most evident in the makeshift dental studio. For example, there is a wheelchair that has been converted into a dental chair, so that you can still be treated for cavities while you can no longer walk. Van Lieshout has also acquired a number of phantom heads, plaster heads on which dental students learn to drill. He mounted one of them on the back of a young man's head: “You do need an artist to come up with that.” 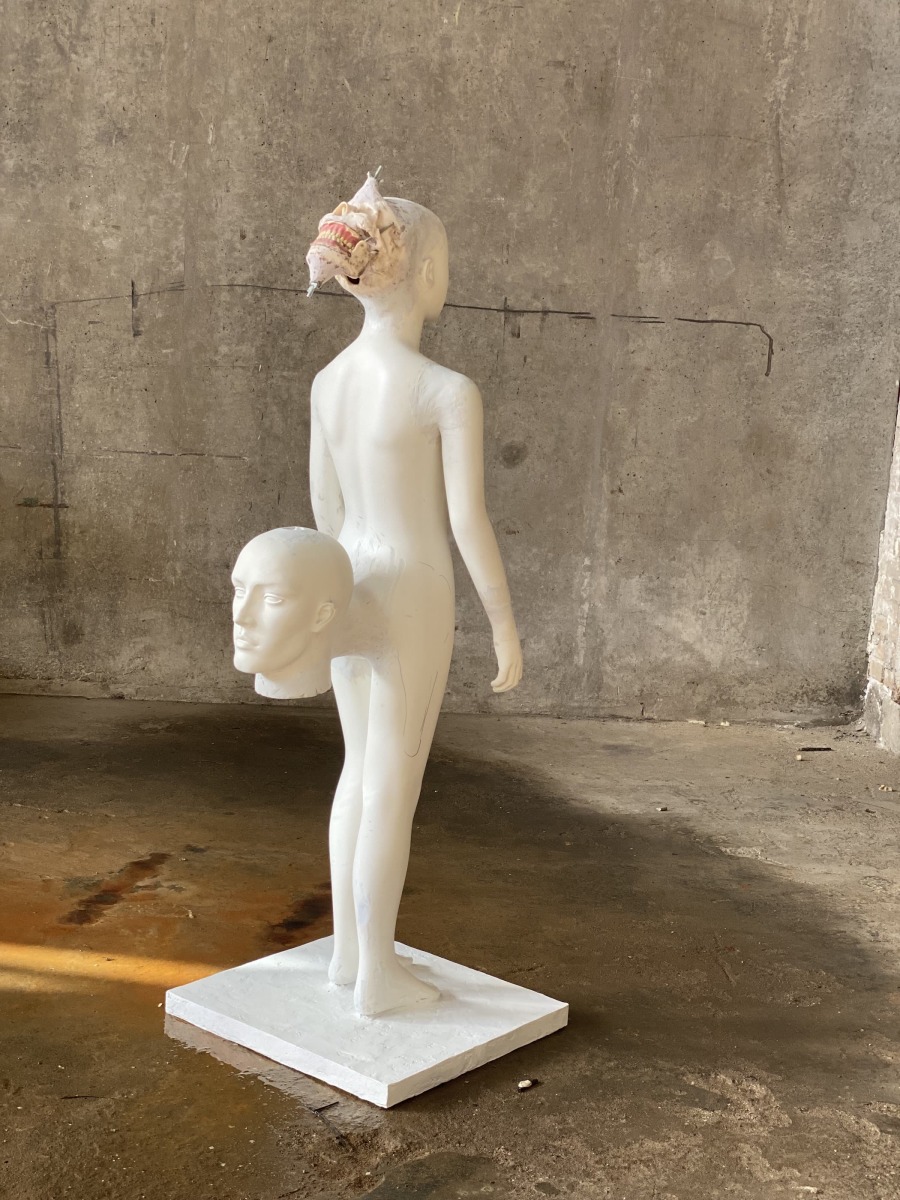