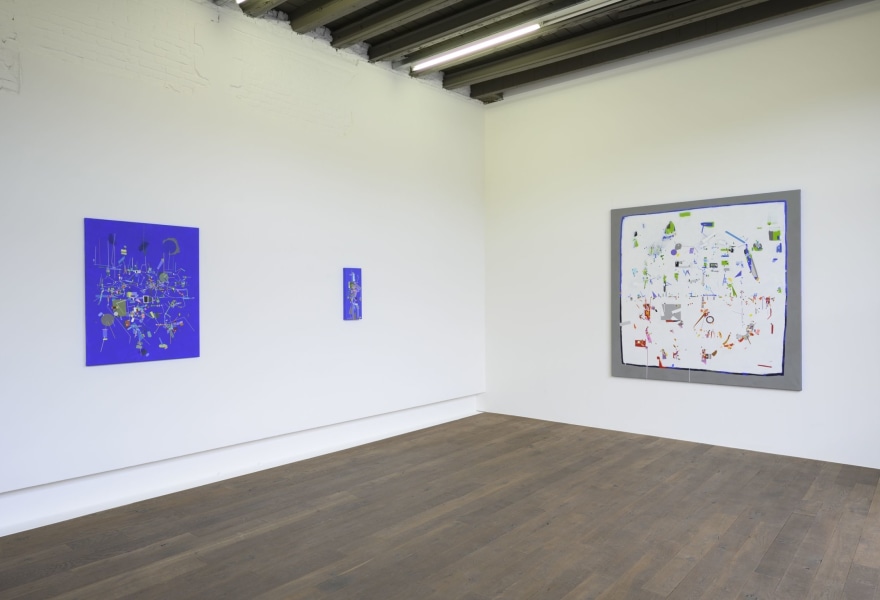 For several years, the Belgian artist Bart Stolle (1974) has been working on a complex oeuvre consisting of paintings, drawings, sculptures and animation films in which his personal 'translation' from the digitized world to the physical world is central.
In his 'Low Fixed Media Show' at gallery Zeno X in Antwerp, which is on until October 23, he analyses the logic of both the computer and the human mind and manages to expose the differences between human intelligence and AI through his abstract paintings. Stolle likes to 'infiltrate' the virtual world, but certainly does not make digital art. A complex combination of logorithms enables a computer to make two thousand paintings in one second. Stolle seeks the analogue answer to the lightning-fast virtual world precisely in that delay: in the tranquillity of the moment and the attention for every square millimetre in order to arrive at a work of art that may not be perfect according to the laws of digital logic, but for the human mind does. 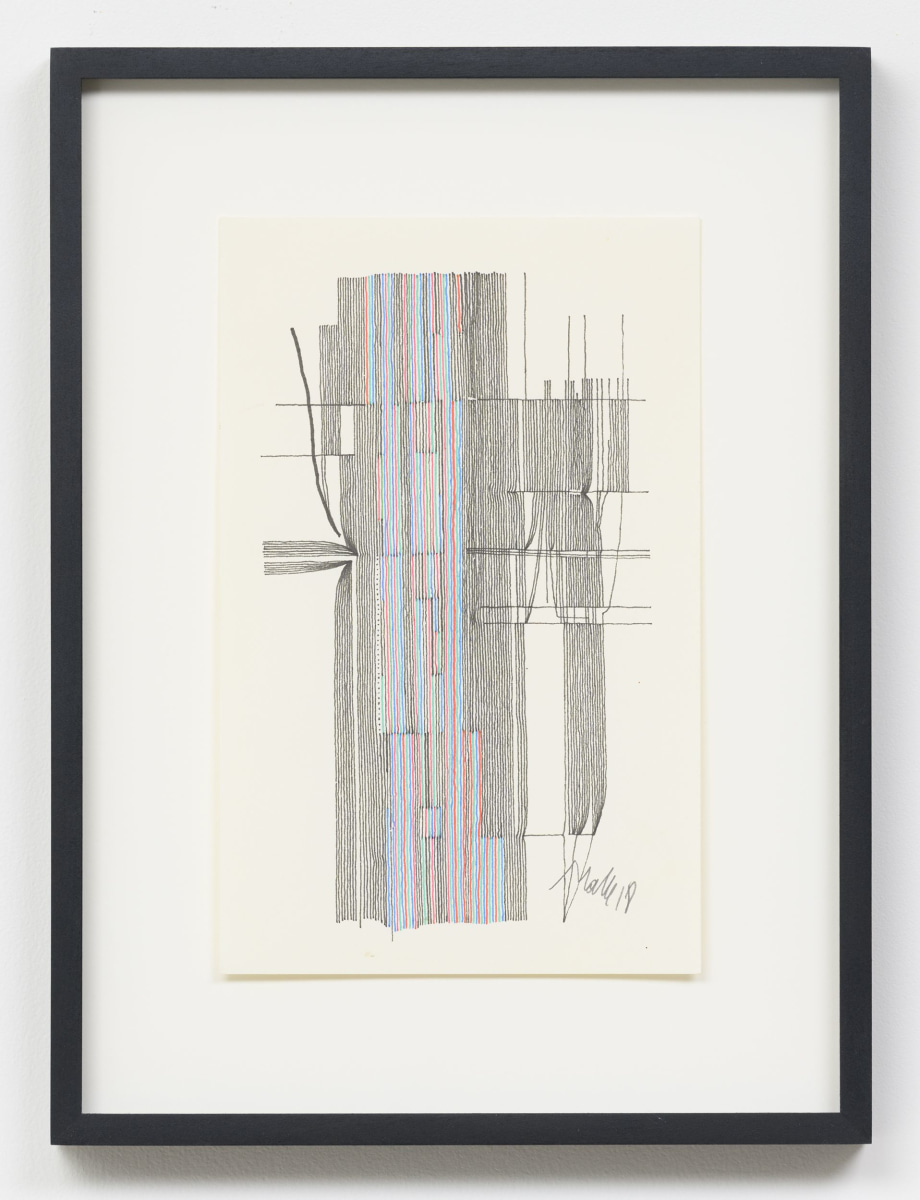 Stolle: 'Rhythm, melody, colour, stillness, movement, explosion, are universal elements to reflect on our concept of time, on the environment.' But what is that environment: a world inspired by algorithms or by meditation and stillness? Philippe van Cauteren, director S.M.A.K., writes in this regard:

Like most forms of meditation, these drawings are objectless, they even seem to be created automatically. Bart Stolle seems at the mercy of a plotter, as he converts unknown data into lines and dots, makes use of hitches and chance, glitch and system errors, repetition and rhythms, infected patterns. Mental landscapes are the ones that intuitively explore analogue and digital drawing systems.

In his art, Stolle highlights the contrasts between the analogue and the virtual, chance and calculation, movement and stillness, the craft and the virtual and the manual and the mechanical. He contrasts the automatically generated drawings of the plotter machine with handmade drawings and paintings in which every line, every point and every color has been executed for personal reasons, at a specific moment in time and is therefore unique. With his 'translation process' of digital data into color and composition, stillness and movement, Stolle makes elements such as space and rhythm tangible and tangible. 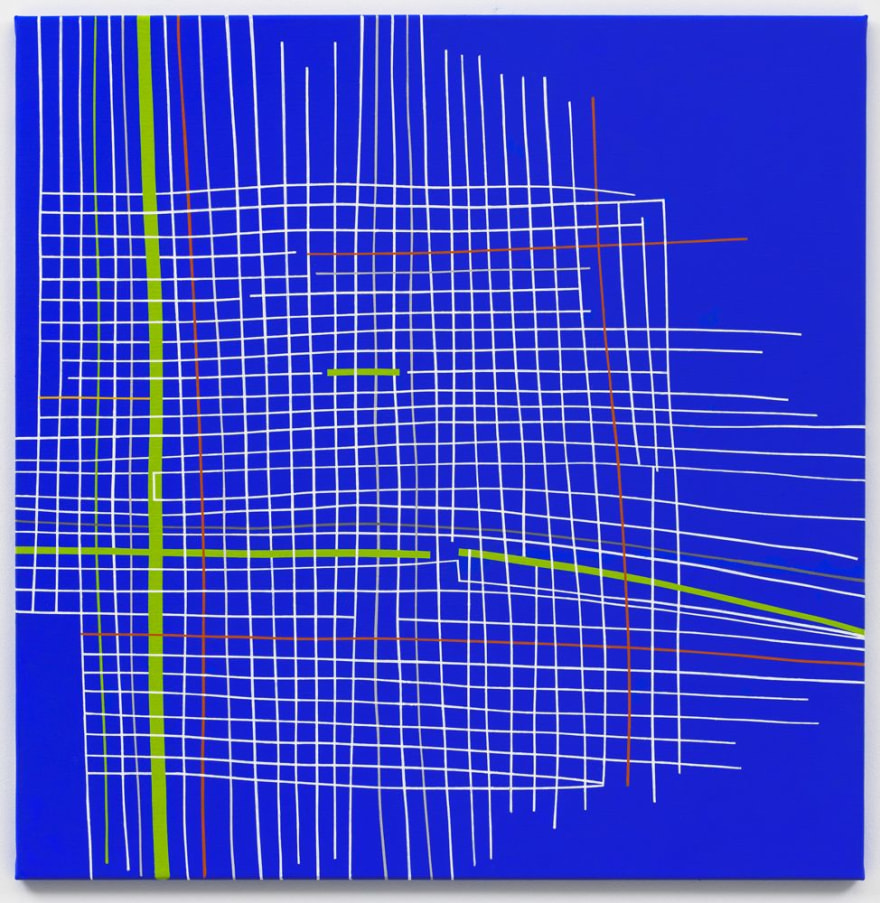 Stolle likes to make elements such as movement and rhythm tangible. Like the annual rings of trees or the microgrooves of an LP record. He thinks back to his art academy days where he belonged to the first generation of students who had a computer in the classroom, which became an essential source of information and inspiration to him. He is also happy to have worked in the advertising world, otherwise he would never have been this good with software programs such as Illustrator and he would never have been able to penetrate so deeply into the digital world.

According to Malevich, the purpose of art was to create a new reality without any relationship with nature or the things around us. In that sense, his 1917 'Black Square' was the first pixel.

The strength of Stolle's work lies in the way in which he gives 'soul' to a digital world on the basis of meticulous work, specific choices and combinations of shapes, colours and styles. This gives his abstract paintings a 'human' face that evokes memories of abstract painting from the early period of Modernism. The paintings of Kandinsky, Mondrian, Malevich never seem far away and yet Stolle's paintings are also indebted to the points, lines, stripes, squares, spheres and rectangles that we know from the imagery of the digital world that emerged at the end of the 20th century.

By converting digital signs into paint and canvas, Stolle is leading abstract painting into the 21st century. Just like David Hockney does, but only in reverse. Through his iPad drawings and paintings of the developments and growth processes of plants and nature, Hockey takes figurative painting into the digitized 21st century.