The gallery of... Stijn Coppejans 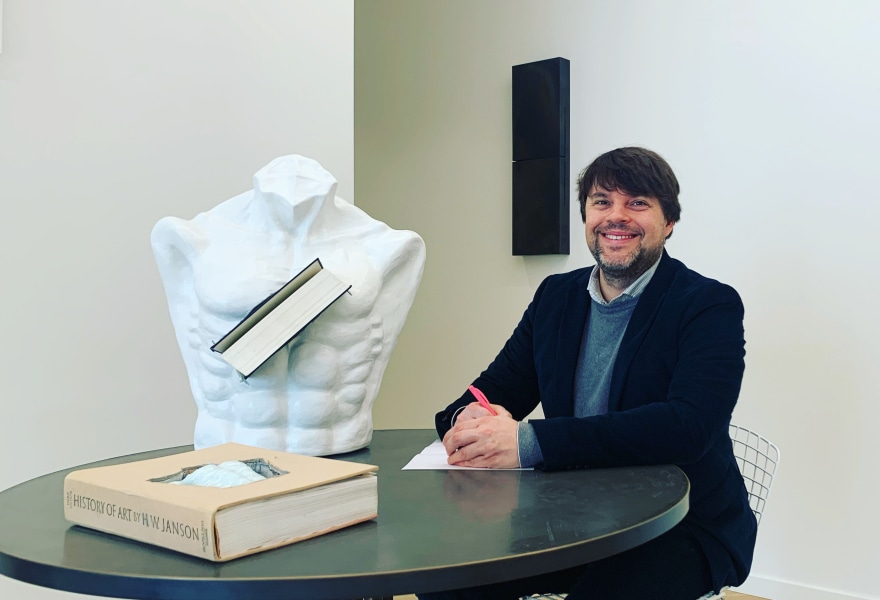 Stijn Coppejans in the exposition Truth/reality.
In the 'The gallery of…' section we talk to a host of gallerists from the Netherlands and Belgium: when and how did they start their gallery, what has changed in the art world since, what is their profile, what do they collect themselves, and what is the impact of Corona on their gallery? This time it’s Stijn Coppejans of (Coppejans Gallery)

Not really. In our house, the radio always played on the same station, and that's about the only culture that entered the house on a structural basis. Having said that, my parents have always allowed me an open view of the world, without prejudice or taboos. This gave me every opportunity to delve into the arts. 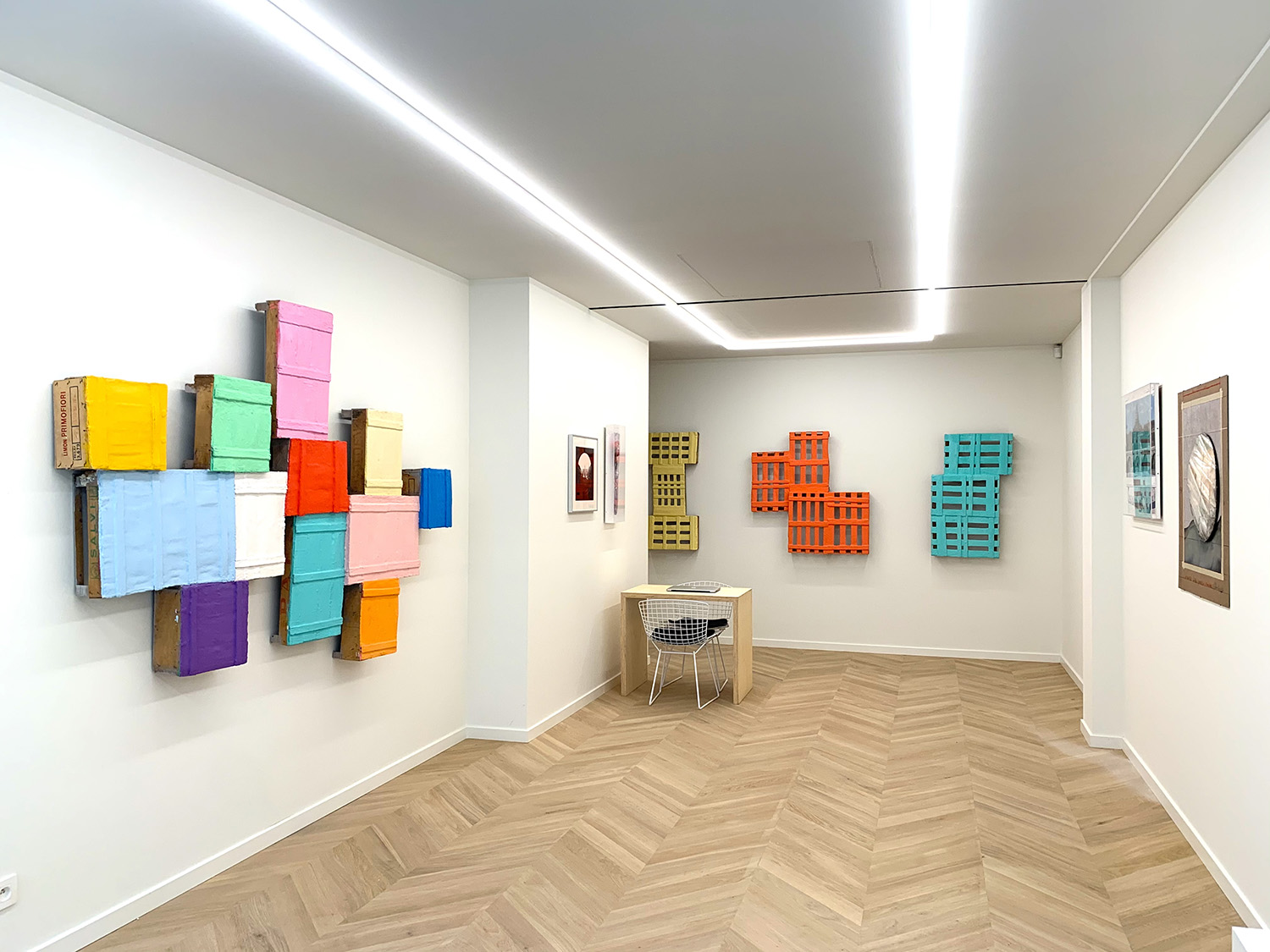 Exposition Packed and Boxed.
How did you come into contact with the art world?

As a searching individual. Already at a fairly young age I was stimulated by everything that brings an open view of the world: music, science, philosophy, and of course also art. Artworks were for me windows on the world, as they take place in the minds of other people. I quickly bought my first work of art, a drawing by Etienne Elias, and became involved in the art world.
During my studies in Ghent, the 'Over the Edges' project took place in the city, a project in which Jan Hoet’s museum S.M.A.K. literally went beyond its borders and conquered the public domain. That really broadened my view of art at the time.

I started as a collector at a young age. Soon after I became active in the trade and in 2011 I made a first exhibition with the young artist Peter Depelchin and Bram Bogart. This was followed by several major retrospective exhibitions with Guy Vandenbranden (2012), Jan Henderikse (2013) and Geneviève Claisse (2014). These exhibitions took place in the chapel of an old castle monastery in Eeklo. I also made a large ZERO exhibition there with an installation by Paul Van Hoeydonck and a fire performance by Bernard Aubertin. Not much later I became a guest curator at an Antwerp gallery. When this gallery suddenly closed its doors five years later, I decided it was time for my own gallery in Antwerp. 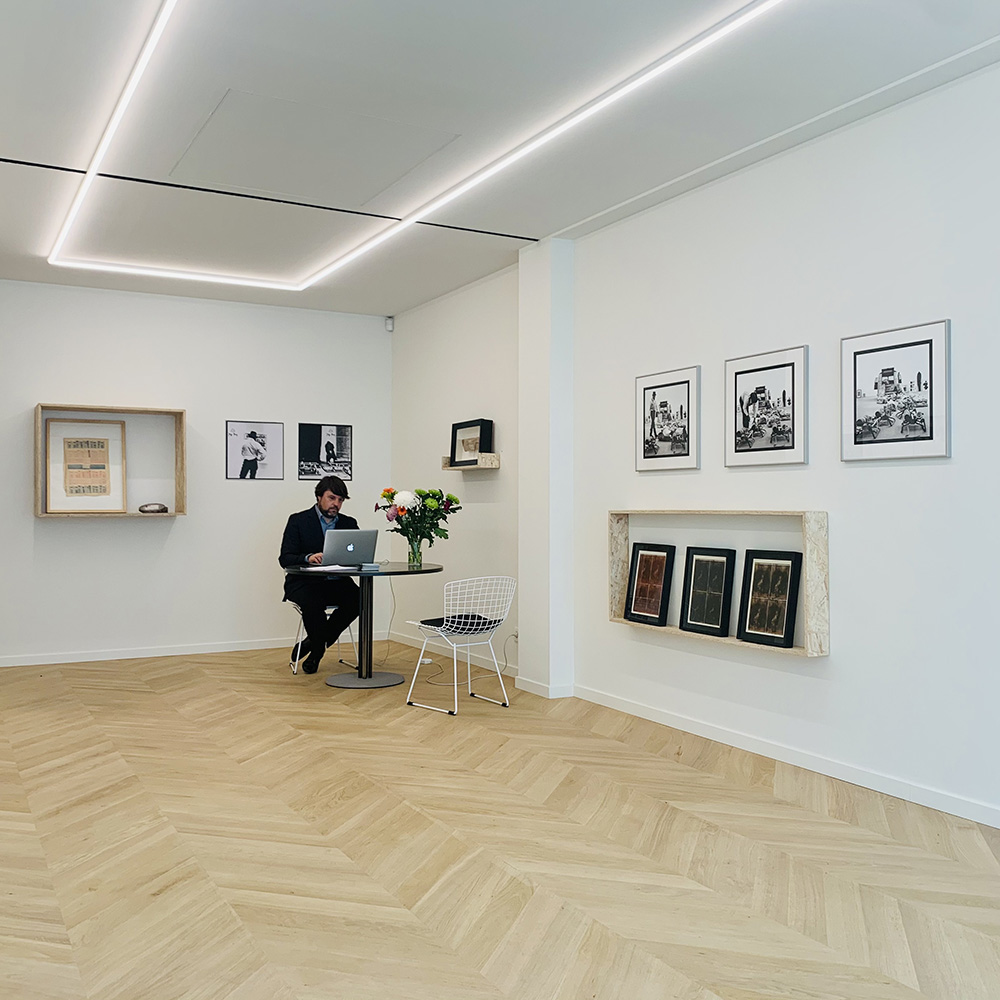 Expo Wer nicht denken will fliegt raus! Work by Lothar Wolleh and Joseph Beuys.
How would you describe your gallery’s profile?

Before starting the gallery, I had a series of 100 conversations with all kinds of people from the art world, from collectors and artists to museum directors. A very intense way to start a collaboration, but it has taught me a lot. My gallery projects are built on the interface between philosophy, science and art. Each exhibition is preceded by a study that informs the content of the project.
For example, I made a series of exhibitions on the theme of truth/reality, and until last week there was an exhibition on 'language in art' entitled WORD featuring work by Alain Arias-Misson and Marie-Sophie Beinke. This weekend the expo will transform into LETTER with work by Gaston De Mey and Wim Nival. Most of my projects are supplemented with performances and happenings in my gallery or on the adjacent Falconplein. For example, a year ago Ewerdt Hilgemann had a cube implode on the square and I built a cage on the occasion of 100th anniversary of Beuys, where seven performances took place.
Partnerships are essential to me. It was a constant in the hundred conversations I had before I started. Bringing artists together, lowering the art threshold for people in the neighbourhood and literally conquering the streets with art. That's my mission. 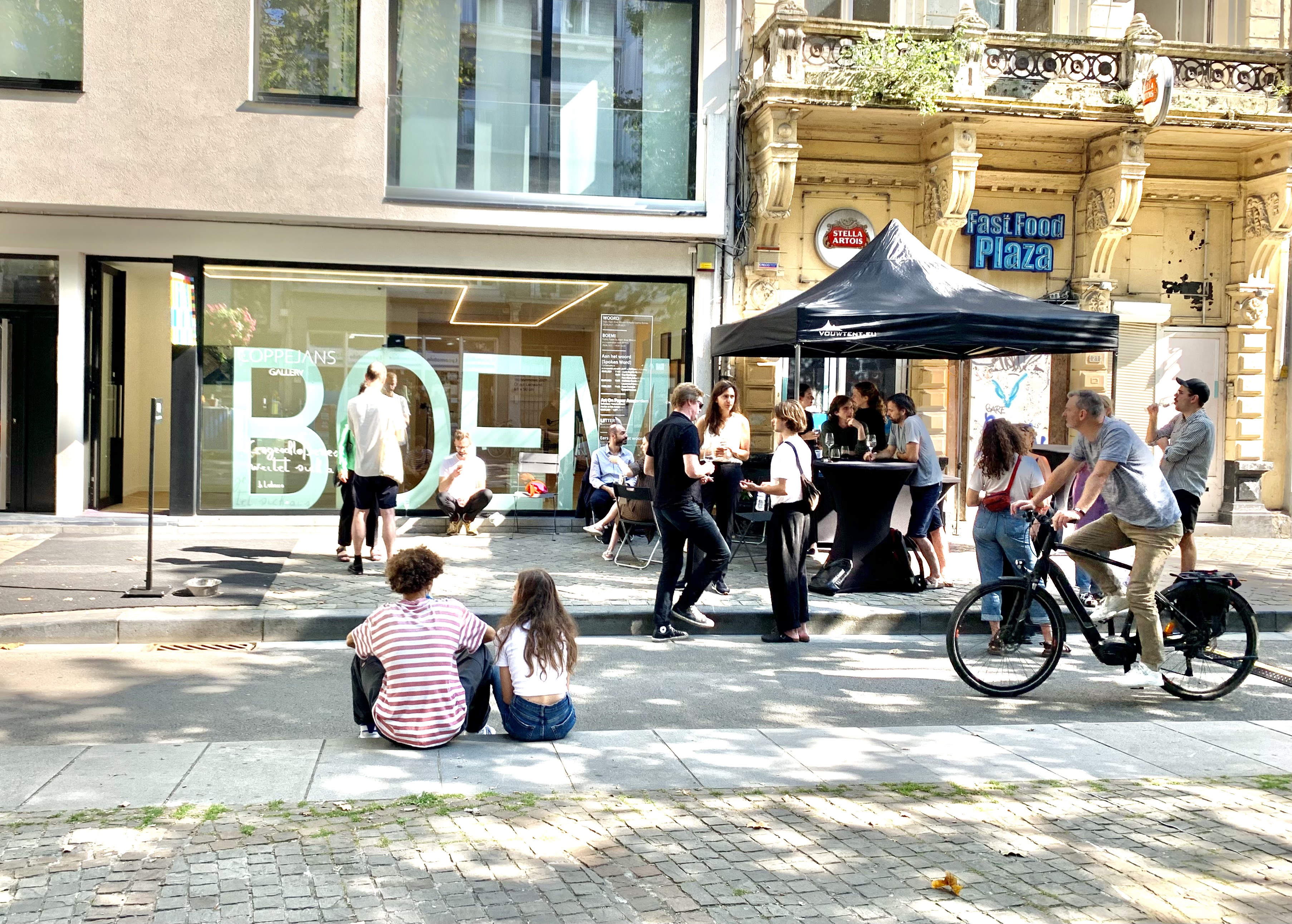 That would be the substantive enrichment. In the year and a half that the gallery has been active, I have already had the opportunity to collaborate with the M HKA on two occasions, I found partners in academia and I have already been approached by three other museums for collaborations in the coming months and years. Every project brings its own challenges and opportunities, which is very interesting.
Ideally, the gallery is the reinforcing link for interactions between artist, collector and enthusiast. Every conversation with a visitor or passer-by teaches me something, and the many contacts with artists always give me something to think about. I also like that as a gallery owner you can really mean something for the collection of your customers. Gallery ownership is a profession with many possibilities. 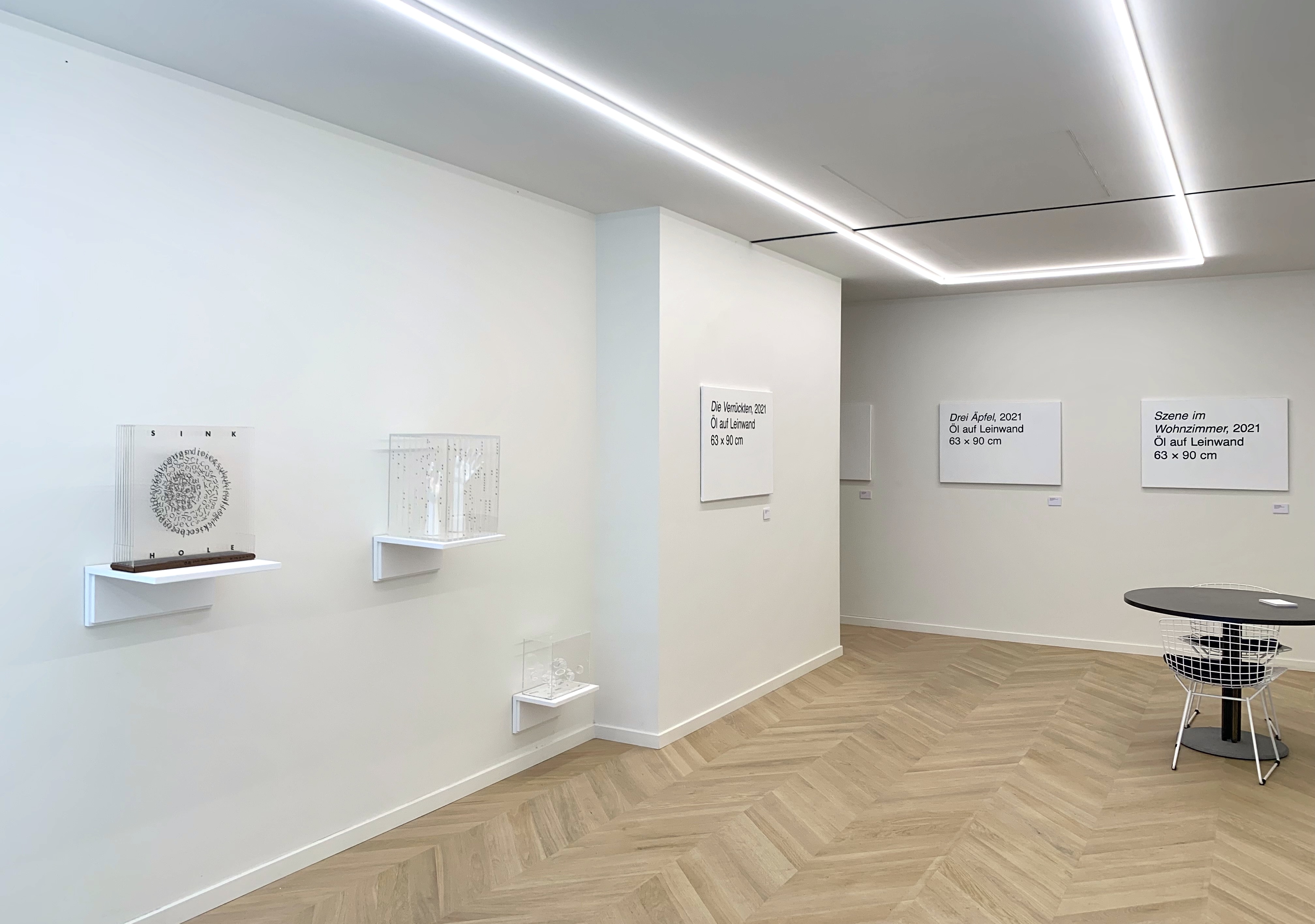 I mainly do my own thing, based on conviction, and with content and quality as the central criteria. I feel an affinity with any gallery that does the same. 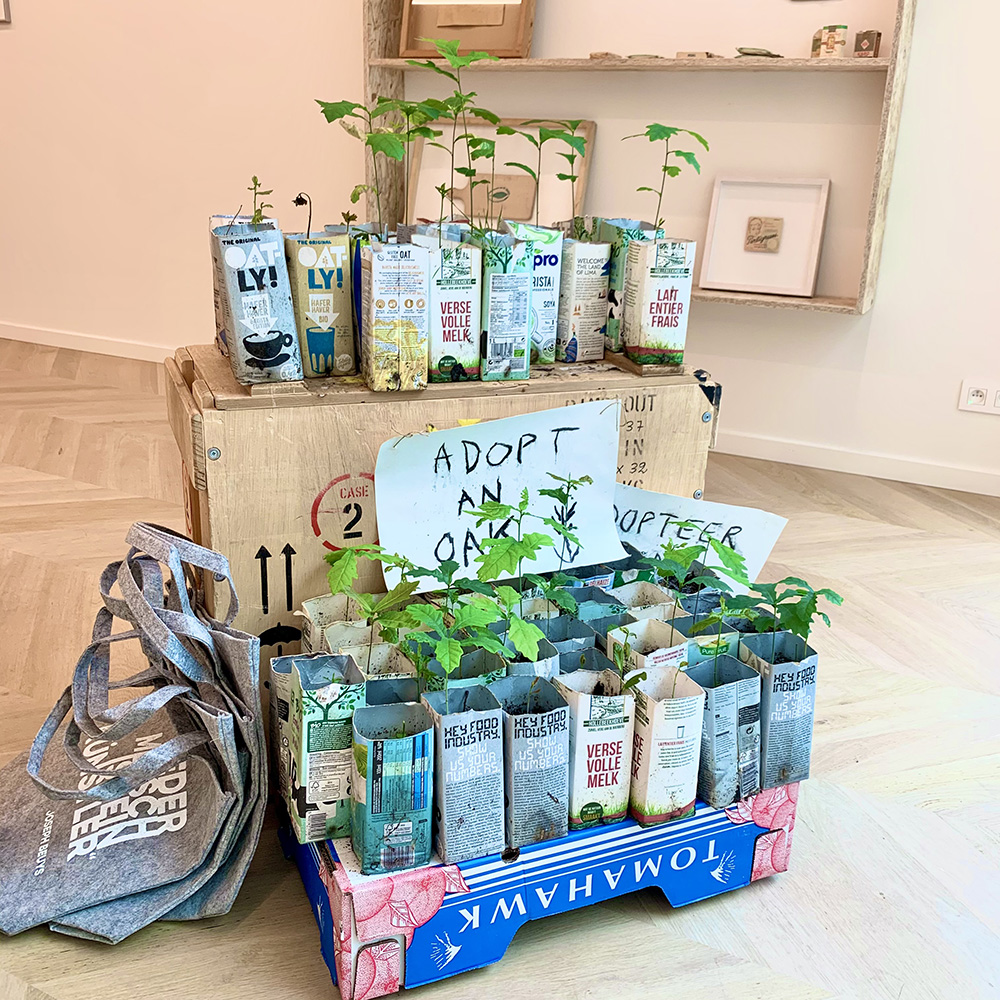 My interests are very broad. I'm actually quite happy with the artists I work with. We have a strong bond and inspire each other to all kinds of projects. Since the gallery's inception, fifteen performances have already taken place. Another one is scheduled for next month. Every time we do something like this, it is the result of an enthusiastic collaboration.
At the moment there are also some promising conversations going on with artists that I will work with in the future. Those contacts arise informally and organically. I like to keep those collaborations vivid and intense. If you put too many people on your roster, superficiality quickly comes into play.

Stijn Coppejans in his exposition about Lothar Wolleh in the M HKA.

In the past decades, I mainly saw an art world that revolved around individuals, about big names. Both museums and galleries mainly presented individual success stories, which seemed to stand on their own. In a sense, I always found that to be in stark contrast to the zeitgeist of the 1960s and 1970s, where artists spontaneously grouped into movements, societies and associations that were sometimes dissolved as enthusiastically as they were created. Just think of the Nul movement and ZERO, CoBrA and everything that has to do with the Hessenhuis in Antwerp.
In recent years, I have picked up on that urge to collaborate again with the youngest generation of artists. They make connections between their own work and that of others, sometimes across generations. I sometimes hear them talking more about each other than about themselves and they involve their colleagues in their projects. That's very refreshing. If it's true that artists are a little ahead of society, I'm quite optimistic about the coming generation. 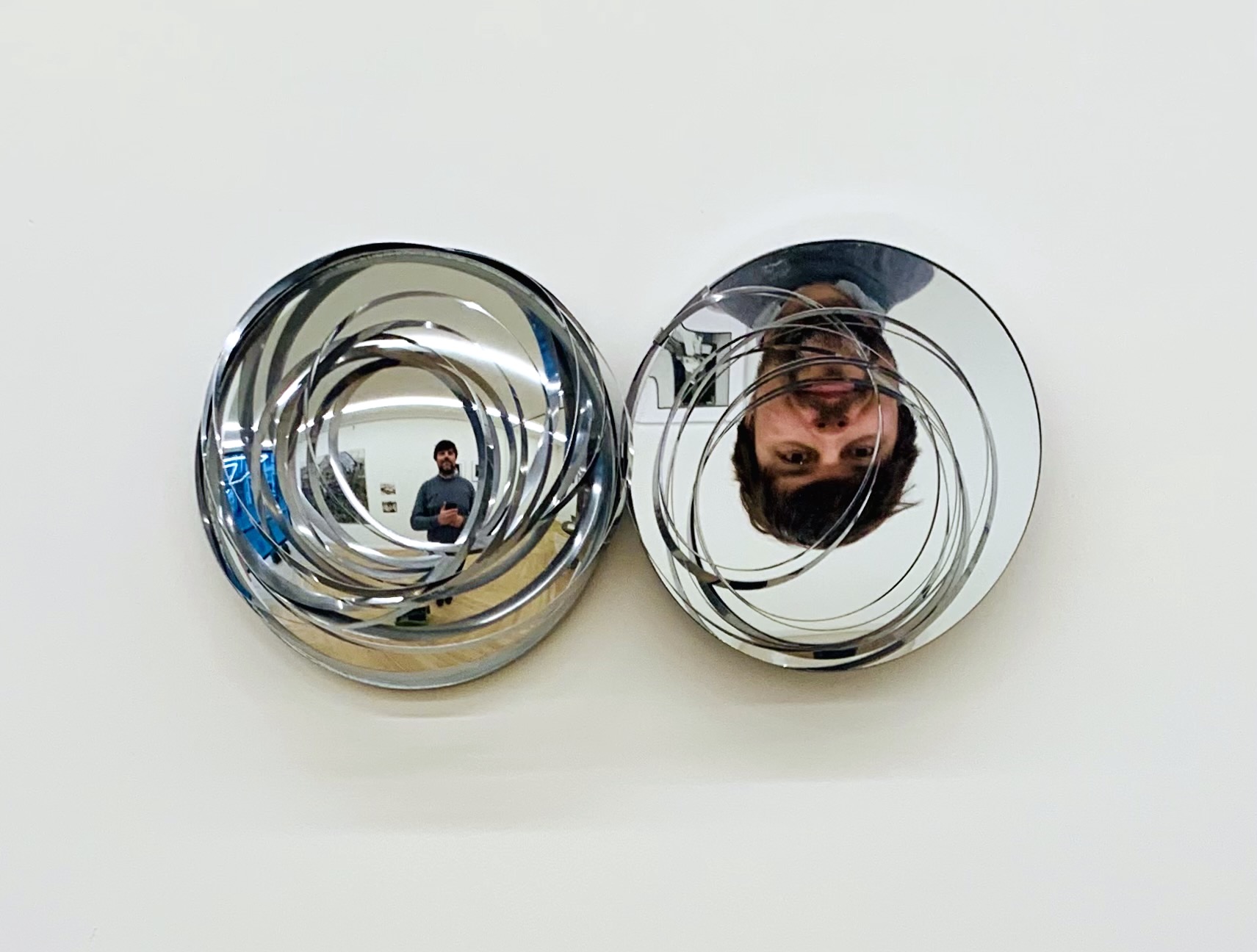 We do have some work at home that is linked to the ZERO movement, but we also have Beuys, geometric abstract art and CoBrA hanging on our walls. The artists I represent also form an important part of the collection. What interests me most are the interrelationships between the works I have at home. For example, above my piano hangs a very small canvas by Gaston De Mey, showing a composition of the letters from 'John Cage'. That one piece makes the connection between the geometric abstracts and the music for me, but for me it also refers to Beuys. The works that have a place in our house usually linger for a very long time. It is rare that a work has to give up its place. Also these works often have a personal meaning. For example, Geneviève Claisse once gave me a beautiful canvas from 1964, when she heard that we were going to have a baby. There are several statues in the garden, including Ewerdt Hilgemann's cube that we had imploded on Falconplein. 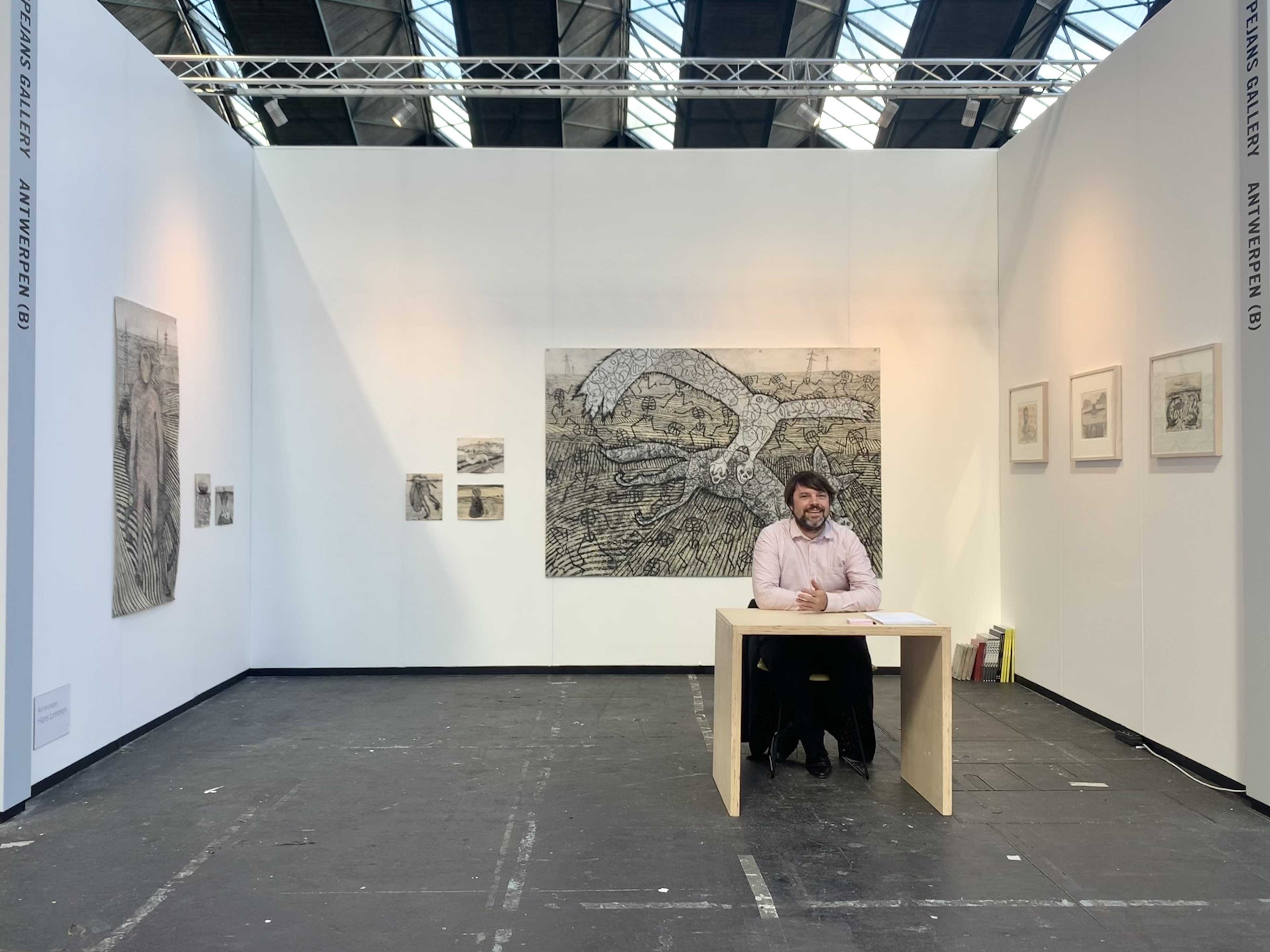 Stijn Coppejans at the fair Art On Paper with work by Hans Lemmen.

My gallery was due to open its doors on 29 March 2020. Eleven days before, it became clear that this would not be feasible due to the first lockdown since World War II. Yet, I have always tried not to let COVID-19 determine my programming. The motto was: keep making plans. That went pretty well, and although things were often postponed or adjusted, the programme as such has remained intact. At times the public health crisis even presented new opportunities. Hilgemann’s imploding cube might otherwise never have taken place, but due you the extension of his exhibition at the Kröller Müller Museum it suddenly made sense and we were able to create an exhibition here too. On the other hand, I saw many colleagues carry on in desperation. It was not an easy period for many, but perhaps because I had just started, flexibility and perseverance gave me proportionally more attention than I would have had in 'normal' times.
Going forward, what I’ll remember from the pandemic is that we ultimately need each other to take steps forward. Working together and taking care of each other may well become an art in its own right. 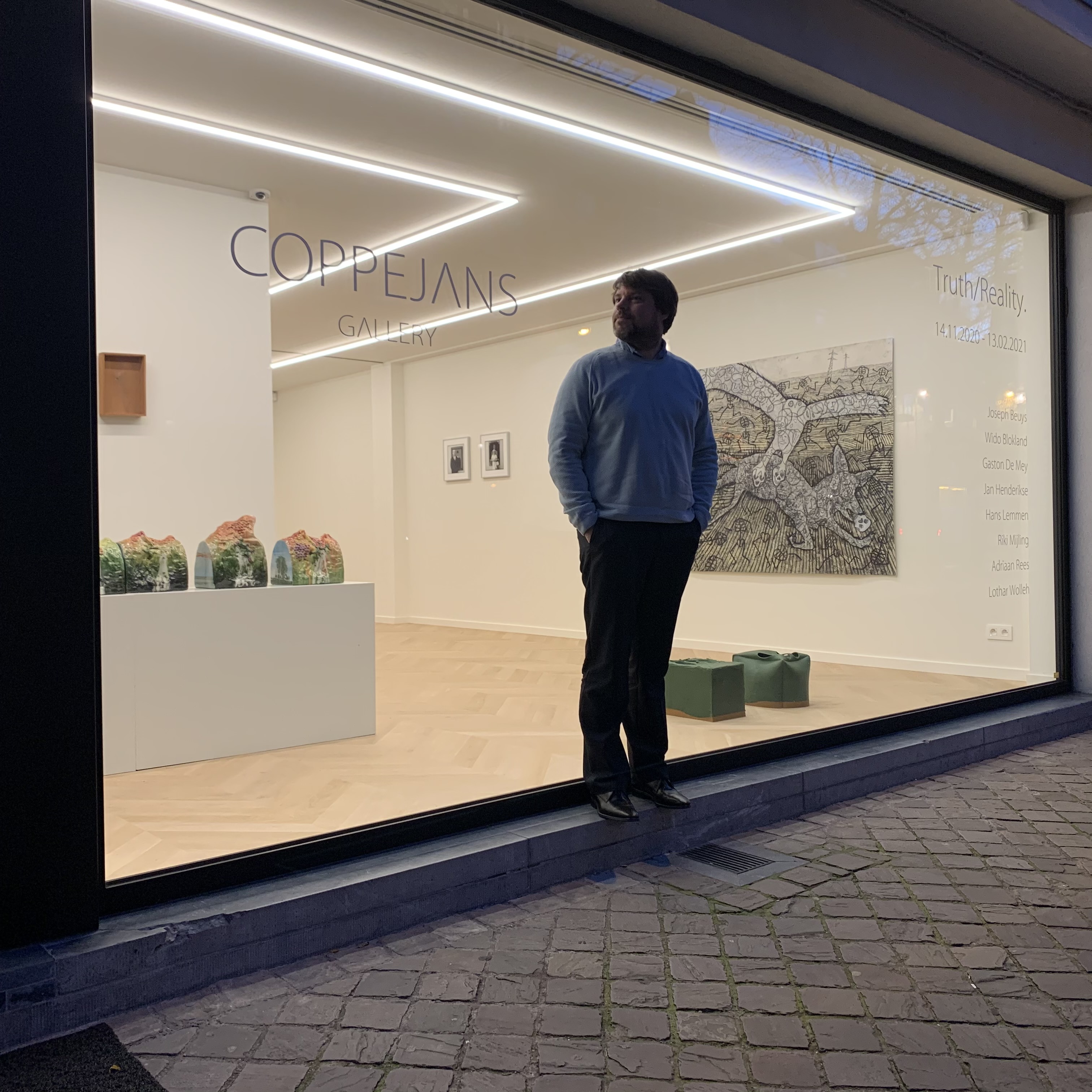 Stijn Coppejans in front of the gallery during the exposition Truth/reality.