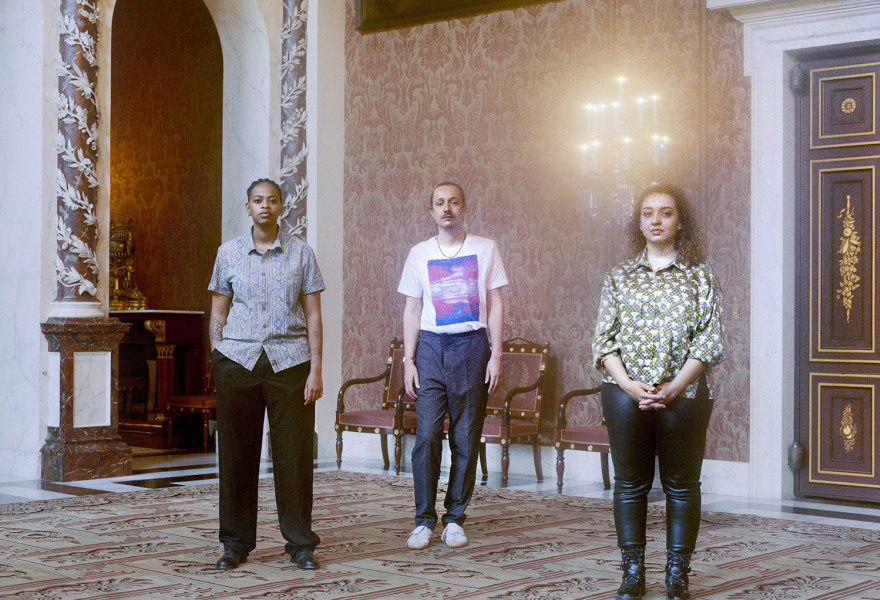 Last Wednesday afternoon, King Willem-Alexander presented the Royal Award for Modern Painting to Rinella Alfonso, Philipp Gufler and Hend Samir. The winners will each receive 9,000 euros. At the same time, the jubilee exhibition Border Explorers opened in the Royal Palace Amsterdam featuring work by winners and nominees from the past 30 years.

The prize is awarded annually to promising artists up to the age of 35. This year marks the 150th anniversary. According to the jury report, the three winners show “the scope of contemporary painting” with their surreal landscapes, screen-printed mirrors and abstract fusion of Middle Eastern and Western visual traditions.

This scope is also apparent from the work of the 15 nominees whose work can be seen in the corridors of the Royal Palace. The level of the nominees is high and their work varies from abstract to figurative and from dreamy to committed and hyper-realistic. This year there were no fewer than 566 entries, a doubling compared to 2019. The lockdown will certainly have played a role in this, but the jury also has the impression that painting is on the rise.

Three winners
It is remarkable that none of the three winners were born in the Netherlands, but were (partially) trained there. The jury's choice thus underlines the international appeal of Dutch art education and the success of residencies such as De Ateliers (Rinella and Gufler) and the Rijksakademie (Samir) in particular.

Rinella Alfonso (b. 1997) was born in Curaçao and talks about the 'accidental works of art' one encounters on the island, such as an old plastic chair that slowly decays under a tree due to moss and vegetation. Yet, no one throws the chair away. In fact, someone placed a pile of bricks under it and suddenly a sculpture is created. This playful way of looking is typical of Alfonso: “My best works start with sketches in which I gradually let go of my original preconceived idea, so that an image emerges that is a surprise – even to me. My paintings display an ideal relationship between abstract and figurative art”. You can see that balance in the dark blue tones of the Upward Splash and Peek shower scene.

A number of triangular, screen-printed mirrors by the German artist Philip Gufler (b. 1989) are on display that may initially be reminiscent of Op-Art or Blinky Palermo's Blaues Dreieck, but refer to the triangles that homosexuals were forced to wear under Nazi rule. By combining a reflection on the history of homosexuality with historical monochromy, he "brings the European abstract tradition into a completely different, topical debate", according to the jury.

Hend Samir (Cairo, 1986) tells many stories within a single canvas. There is so much to see on Dream Home with Cable Cars leaving one perplexed for a while. Is that a cable car and what’s behind it, a kind of doll's house with all kinds of rooms? The thick layers of paint collide with each other in a kind of swirling slurry, which means that there is no clear hierarchy within the canvas. Samir thus undermines the traditional role patterns within the family. The jury speaks of a palpable tension just below the skin. Samir paints between “desire and social convention, safety and danger. Painting presented as dancing on the volcano”.

Trailblazers
While the nominees hang honorably next to each other in the galleries of the Royal Palace, the works from the Trailblazers jubilee exhibition are given plenty of space in the period rooms. In each of the 17 rooms one work can be seen that enters into a dialogue with the room, the historical background of the building or the national history. If you leaf through the catalogue, you will immediately notice the large proportion of female artists (13 out of 17).

Curator Mirjam Westen calls it a small miracle that all the artists cooperated, because many of them are currently busy with exhibitions that were postponed due to the pandemic. Helen Verhoeven (winner in 2008) even made a completely new work for the impressive Throne Room in three months: The Family. As with the magisterial De Hoge Raad (2015), she brings together a large group on the 4 by 2 metre canvas. Verhoeven mixes fact and fiction and brings the members of the House of Orange together over the centuries in a panoramic family portrait.

Other rooms are treated to an intervention. A real eye-catcher is the floor installation by Suzan Drummen (winner in 1989). For two weeks she worked continuously with her assistants in the king's study on a fluorescent installation made of paper, glass and crystal. Her installation reacts with clashing colors to the patterns, textures and colors present in the room. A bold move by the curators; one that shatters the expectations that come with an exhibition in a stately building.

The interaction with the historical function of the former city hall of Amsterdam is most apparent in the place where death sentences were once pronounced: the Vierschaar. Kim van Norren (winner in 2010) installed above the sculptures by Quellinus three canvases with excerpts from Queen Elizabeth's Coronaspeech (We will meet again) and Conchtita Würst's I will rise like a phoenix. The texts do not only seamlessly fit with the space, but are also about remembering difficult periods. “We tend to be quick to put major happenings behind us. We are constantly moving on. It would be good for us to commemorate more events, so that we could learn from them. We need to pay attention to the things that have shaped us," says Van Norren. In the Vierschijn, she shows what has shaped her by presenting Würst's words on an equal footing with those of the British queen.

The exhibition Royal Award for Modern Painting 2021 and the jubilee exhibition Trailblazers can be seen from 15 July to 3 October in the Amsterdam Royal Palace.
In this article