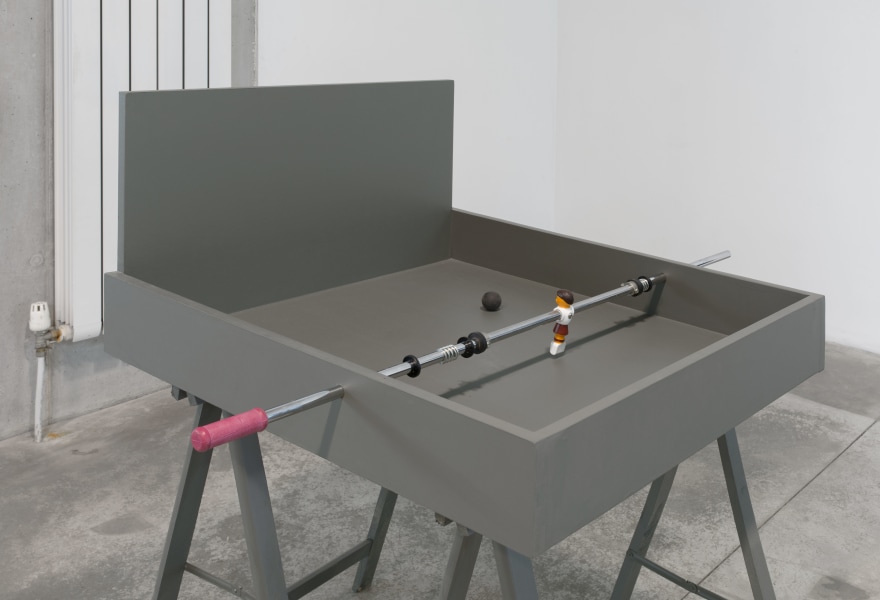 It is almost 4.30 pm and I have already had a long day when I enter Gerard Herman's studio in Antwerp. It’s not exactly a studio, but rather a room he rents from a friend in a large house, which is stuffed with books, parts of a drum set, an old box (which turns out to be a work of art), mixing consoles, models, a large photo portrait of his mother (of whom he is the male version), a desk, an armchair and another, less comfortable, chair, etc. I collapse with a deep sigh while Gerard never stops smiling. He looks like an amiable young man who is not easy to dissuade. But appearances can be deceiving.

While Gerard is making coffee in the adjacent kitchen, I am looking around in amusement in search of art, objects and signals that can offer insight into the thinking process and courses of action of this striking young artist. Then suddenly a post I recently read on Facebook comes to mind and goes like this:

Artist Gerard Herman spent three days and three nights at the Van Maerlant Lyceum in Eindhoven: "Nobody is about to find out what the purpose of this stay was, myself included!" You can see how he fared in Eindhoven on April 5 during the mini festival 'Nablijven' (Detention). Gerard will also sing a number of schlagers that evening (!).

Such a description defies any imagination and to understand Gerard Herman I read his bio on Wikipedia:

Gerard Herman (Ghent, 1989) is a Belgian artist who creates graphic work, installations, animation films and sound compositions, which are simultaneously used and intertwined in his work. His oeuvre is influenced by Dadaism. At the age of 24 he had his first retrospective, "Arm en erg hard" (an anagram of his name), at the M - Museum Leuven in Leuven. In this exhibition he showed his "conceptual cycling tours": the cycling tour 'Wilrijkevorselaarne' (from Wilrijk to Rijkevorsel via Vorselaar to Laarne), as well as the 'Climbing out of a Belgian valley' tour (from the lowest point in Belgium, the sea, to the highest point in Belgium, the former meteorological station Signal de Botrange). Herman makes the programme "Vogelen des velds" for the local radio station Radio Centraal.

Unfortunately, Wikipedia is only updated until 2014 and it is precisely in the last six years that a lot has happened with and around Gerard. He worked with Simon Delobel, founder of the Antwerp-based and now defunct gallery Trampoline. Gerard's films and drawings, which can be seen on the Trampoline site to this day, show the link between Herman's playful, anarchic spirit and that of his mentors and inspirers Vaast Colson and Dennis Tyfus. He was still to turn 13 when he fell under the influence of Dennis Tyfus (1979), a high-profile artist, graphic designer, musician and publisher from the Antwerp art scene who was known from an early age for his anarchist attitude towards the contemporary art world, and Tyfus’s brother in arms Vaast Colson (1977). Although trained as a painter, Colson is known for his critical attitude towards the art world and in particular the role of the artist in it. Together with Dennis Tyfus (and Peter Fengler), Colson runs the "Pinkie Bowtie" gallery in Antwerp, where thought-provoking art is shown. The work of both artists is characterized by distinct theoretical and artistic insights mixed with a good dose of rather cynical humour. Gerard's work is also funny and critical, but in a more personal way and on a more intimate scale. You could describe him as the light version of his colleagues Colson and Tyfus. 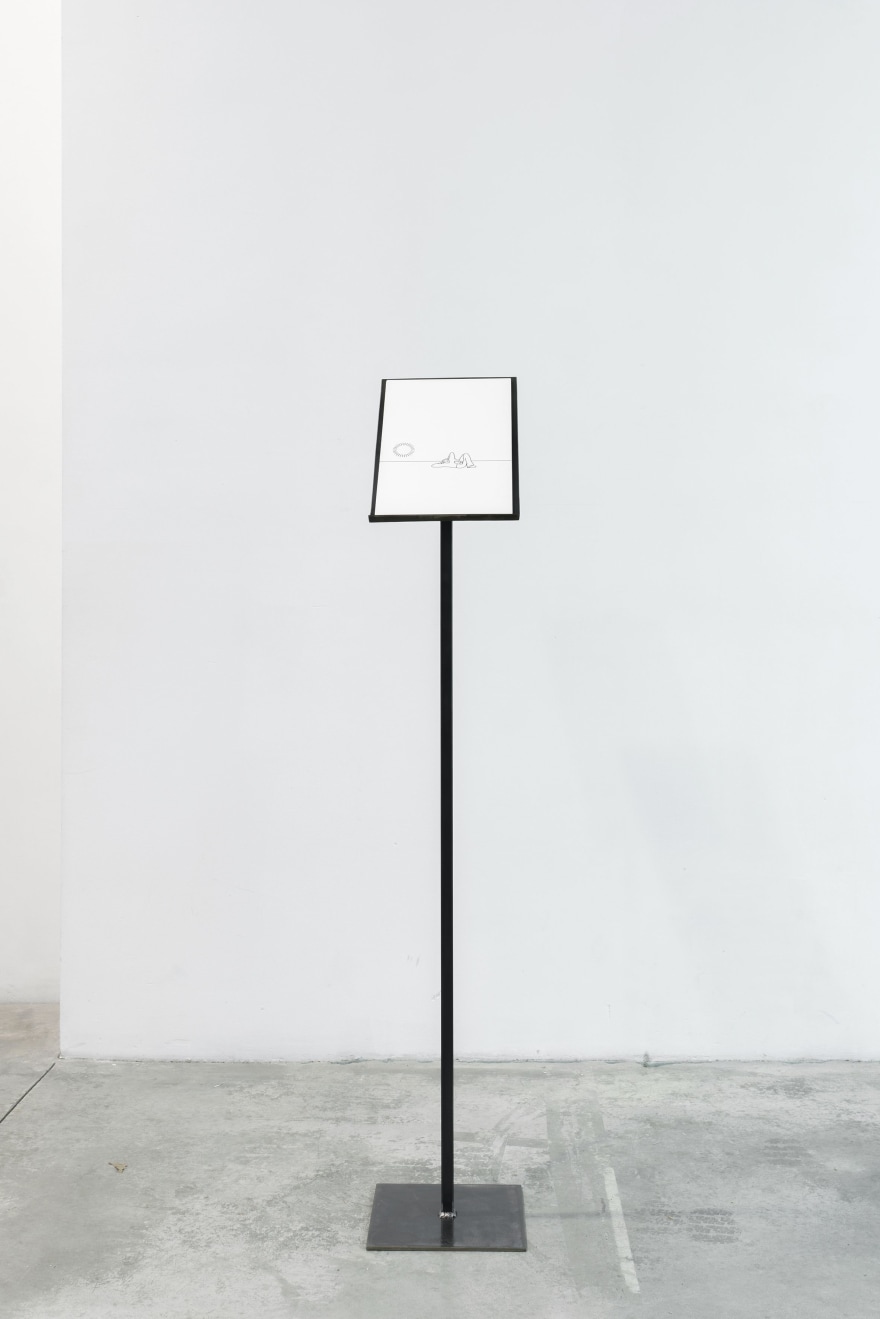 Trained as a musician, sound and music often appear in Herman's repertoire in an experimental way. When I leave an hour later, I receive a CD entitled "Songs for every day of the week", which he made in 2016 and 2017 together with composer and accompanist Milan Warmoeskerken. The cover looks like any other song of life or schlager LP from the 60s / 70s. Titles such as 'Free tonight', 'Please', 'Where there is a will, there is a path', 'Didn't I hate that much' and 'All my euros have been stolen', clearly reflect the tragicomic character of Gerard's lyrics and explain his matching somewhat wailing voice. The haircut, outfit and poses of both gentlemen do the rest.

He also gives me a copy of 'Children's book: a book for children' which he wrote, as well as a number of publications from his publishing company Groepsdruk. One of them is called ‘Terug naar af’ (Back to square one). About the origin of "Back to square one " he writes:

This publication came about at the last minute […] after a large number of drawings mysteriously went up in smoke on the train between Antwerp and Mouscron. All drawings and poems can be read as loops, where the end connects seamlessly with the beginning.

“What are you going to show at Ballroom”, I ask him. He shows a drumhead stretched in an iron frame with two drumsticks on top. "My father welded that structure around that drumskin," he says, "you can tell it was made with the best of intentions because it's not quite perfect." He laughs and explains that the wind, coming from a fan, is supposed to move both drumsticks to create a drum roll. However, the construction – which indeed has a DIY feel to it - does not produce anything other than a slow and meagre beating on a drumhead. Even if you’re looking for makeshift solutions, you can be faced with technical surprises.

This brings us to the second work he will be showing: an old wooden box belonging to his grandfather. Gerard: “For more than five years now, I have been working as a volunteer in a psychiatric prison where I give drawing lessons to inmates. There is a door in that building on which a sign is screwed that reads: "Due to recent abuse of trust, this door should be permanently closed." This text inspired me to make a similar sign for in and on top of the chest. I'm not going to reveal more.” And he smiles again. ’s Avonds ben ik bij mijn vader en zet ik de CD op. We genieten van alle liederen die we al ras uit volle borst meezingen. Ik kijk naar mijn vader die zoveel plezier heeft. Een aanblik die me ontroert. Zo’n effect heeft Gerard’s kunst.