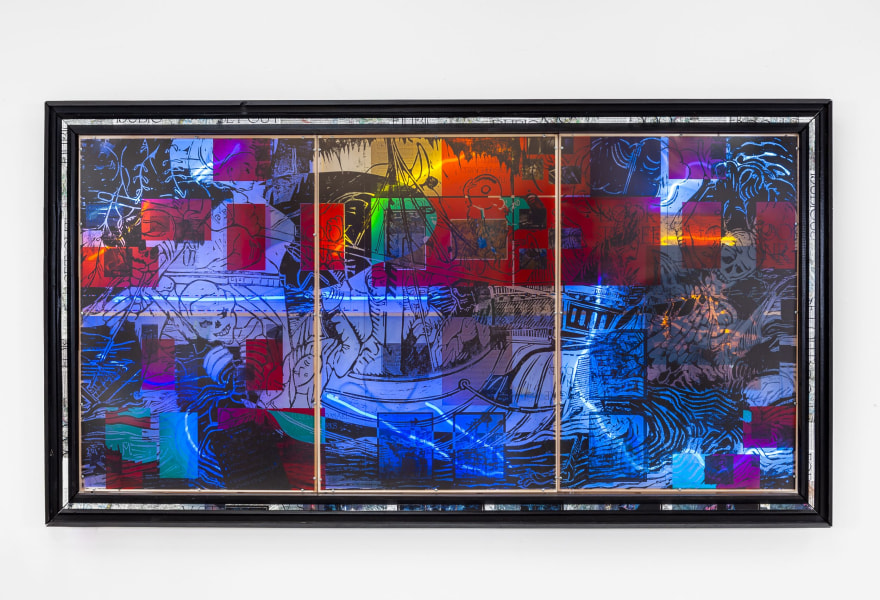 Joris Van de Moortel, All swollen to a kind of epic wind. Livid the land, who has taken over., 2021, Galerie Nathalie Obadia.

You can say a lot about Joris Van de Moortel (1983), but you can’t accuse him of being boring. Since graduating from the Künstlerhaus Bethanien in Berlin (Germany) in 2013, and the Higher Institute for Fine Arts (HISK) in Ghent (Belgium) in 2009, he is known as one of the most outstanding artists of the contemporary Belgian art scene. After our conversation I wonder if there is anything the man hasn’t done: his resume includes a collaboration with fashion icons AF Vandevorst, music (including collaborations with the National Orchestra of Belgium, Spectra Ensemble and Mauro Pawlowski), and visual arts (video, performance art, collages and installations). Nothing is beyond this all-round artist. A striking and recurring feature in his work is that it isn’t so much determined by the end result but rather by the process itself. Constant changes - which he himself seems to want to control only to a certain extent - lead to new uses and meanings of materials that originally served other purposes (such as a piece of clothing as part of a collage).

Van de Moortel also loves to skillfully destroy his own carefully constructed exhibition in order to challenge himself again. He also takes pleasure in making an exhibition look as if a hurricane has just passed by. During our conversation it becomes clear to me that I am dealing with an artist who effortlessly builds an oeuvre incorporating such diverse references as 15th and 16th century Flemish painting, punk’s transgressive mentality, experimental music, medieval writings and mysticism, and contemporary digital media. Styles and centuries are intertwined with each other. In addition, he uses an endless range of techniques and instruments from wax to neon, from watercolours to woodcuts, from video to soundscapes and from recycled musical instruments to clothing. Nothing or nobody seems safe once Van de Moortel has made his plan. The following excerpt is hardly reassuring either:

And thunderous bells sound through Joris Van de Moortel's art chapel. The sound bubbles up from a gong and resonates in the speaker cabinet of a kind of baroque altar. In it lie lifeless performers, or rather, what remains of it. The only source of life comes from their iPod touch, which loops rustling videos from previous performances to the beat of the gong. (https://www.bozar.be/nl/magazine/148256-cachivache-bugui-bugui)

Joris Van de Moortel, Rehearsals are even to scheduled for us, 2020, Galerie Nathalie Obadia.

Where do that energy, those excesses, those experiments come from? What does he want with it? And how does he keep them under control, or not?

I think we can find the answer in Van de Moortel's version of "The Ship of Fools," which goes back to Plato's conception of a democratically governed country doomed to go down like a ship with a dysfunctional crew. The concept forms the foundation for the 15th-century book Das Narrenschiff by Sebastian Brant that, together with Shipwreck of Civilizations by Amin Maalouf, were the souces of inspiration for Van de Moortel's Ship of Fools which features himself as (double) flute playing 'captain' (band leader) and the ship as a symbol for a world that threatens to perish due to the rise of the little art-minded, neoliberalism.

It is almost impossible to imagine Van de Moortel's visual art without the mysterious world of the spirits. Whether it concerns esoteric rituals, black magic or voodoo, by means of all kinds of side effects - by playing with light, fire and smoke - a euphoric atmosphere of musical trance is evoked that takes the viewer into a rich world full of visual and mental experiments, nourished by elements from art history as well as those from the world of music, literature and spirituality.

Visitors to a Van de Moortel exhibition or one of his performances experience something akin to being on a boat floating around on the ocean: nowhere to go. There is no here, or there. No perspective or horizon. All there is, is a multitude of impressions and emotions like the choppy waters in which The Ship of Fools will soon sink with crew and all, while the orchestra plays on and its sound is the last to be silenced.
While his guitar gently sweeps…