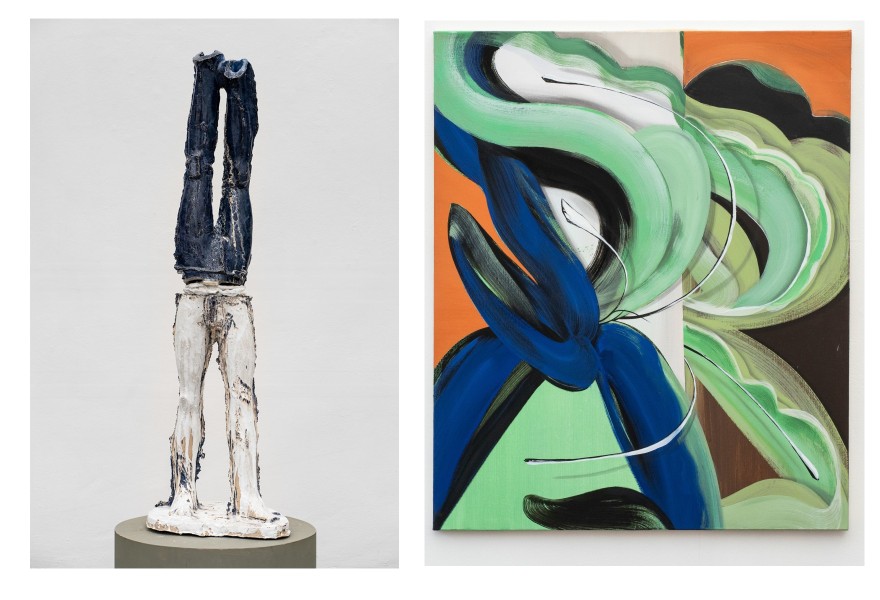 The third edition of the Ballroom Project art fair will take place during Antwerp Art Weekend (from 12 to 16 May) and includes 20 galleries from the Netherlands and Belgium. The Amsterdam-based Galerie Gerhard Hofland will show work by two artists in the BORGERHUB: Belgian artist Johan Tahon and Dutch artist Janine van Oene.

Johan Tahon is living proof that trauma can be a particularly fertile breeding ground for making art — although I wouldn’t want to reinforce the persistent myth of the tortured artist. Tahon grew up with an alcoholic father and discovered at a young age that pain can be a powerful motor and that objects can offer a certain lightness to the heaviness of existence. A key moment in his youth was a visit to a sculpture studio at the age of fifteen. Tahon: “With some clay and other things, I started to make figures that did what my parents failed to do: protect me. It is not as easy as simply telling myself that everything is okay, coming from a kind of trauma. I have to find some concentrate every day to relieve the pain a bit.” It explains the inherent sadness of his fragmented sculptures, which simultaneously instill a deep sense of recognition in the viewer and seem to refer to the human condition, the essence of human existence.

Tahon prefers plaster of paris for his sculptures, partly because he thinks the material is beautiful and cheap and also because it’s quick to work with and smells good. Nevertheless, he also regularly experiments with (combinations of) other materials, including polyester and bronze, and more recently also ceramics with a silver-coloured platinum glaze - although that material requires a more calculated artistic process. A recurring element are the object trouvés that he incorporates in his work, often objects that he encounters in his studio, varying from a steel tube to a car tire. 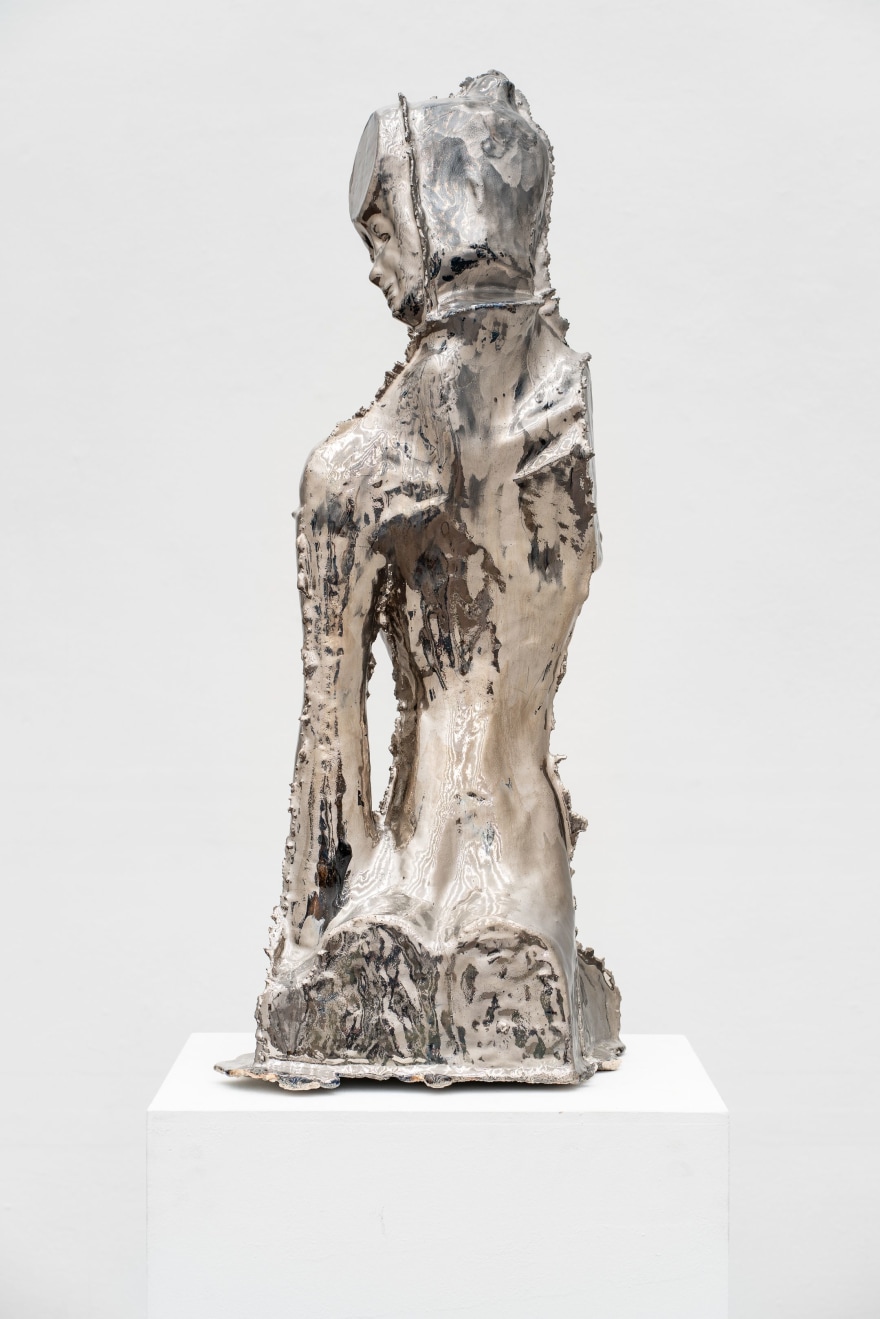 Tahon's sculptures look unmistakably contemporary, but also echo the classical imagery of Egyptian, African, Ancient Greek, Asian and Byzantine art traditions. Artists such as Giacometti, Beuys and Rodin are also an important inspiration for Tahon, who works in an extremely intuitive manner. Tahon: “I sometimes make five or six sculptures that are harmonious in themselves, but end up not being that interesting. Then there is a moment when I see that the head of one sculpture fits well with another statue, or that the arms and legs have to switch places. I then start to chop and play with the debris. The sculpture arises from the pit of my stomach. Experience taught me that this produces the most fascinating forms. By creating from my stomach, I shape how a person feels, rather than how he looks. In fact, Rodin did as well. His "Citizens of Calais" have hands that are much larger than their heads. By doing this, Rodin imbues his statues with an extraordinary expression. It’s what made him the first modern sculptor.” Tahon is always looking for a certain spirituality and mysticism that also characterises the work of his favorite artists. Artists like Beuys know how to express this mysticism in a certain way, making it tangible on a certain level and visible to the rest of us. Tahon: "But if people ask me for an exact explanation of my sculptures, then I can only say that I suspect that they indicate a certain direction."

Tahon was educated at the Royal Academy of Fine Arts in Ghent, but his career really got off to a flying start when Jan Hoet, who was the director of the SMAK museum at the time, invited him to participate in the opening exhibition that heralded the newly renovated museum. The sculptures of Tahon are well represented in the public space and were recently shown in solo exhibitions at the SZU Fine Arts Museum in Shenzhen in China and in Musée Ariana in Geneva. Tahon's work is included in the collections of SMAK, M HKA, Stedelijk Museum Amsterdam, Kunstmuseum Den Haag, FMAC in Paris and the collection of the Dutch Royal Family.

In her work, Janine van Oene is primarily guided by the painting process. From building frames - which she compares to setting a table -, cleaning brushes and mixing the paint, to actually experiencing the structure and possibilities of her materials. Incidentally, the artist regularly prepares her works behind her computer.

Van Oene balances her paintings on the boundary between abstraction and figuration, inspired by calligraphy, but equally by still lifes and dated, kitschy interiors in old magazines. Her abstract and intuitive strokes suggest a certain expressiveness and complex effortlessness. At the same time, her balanced compositions and use of colour testify to the power of simplicity. Yet when you look through your eyelashes, you’re bound to see a hint of figuration as well. Van Oene: "My work is still legible, the small elements suggest space."

After graduating from the HKU, Van Oene was immediately admitted to De Ateliers, a prestigious residency program in Amsterdam, and in early 2020 she completed another residency at the Mountain school of Art in Los Angeles. Her work has been included in the collections of De Nederlandsche Bank, the Academic Medical Center hospital in Amsterdam, the ING Art Collection and the Dutch Royal Family. She won several prizes, including the Royal Prize for Painting, and in 2020 the Jeanne Oosting Prize — of which the jury consists entirely out of artists. 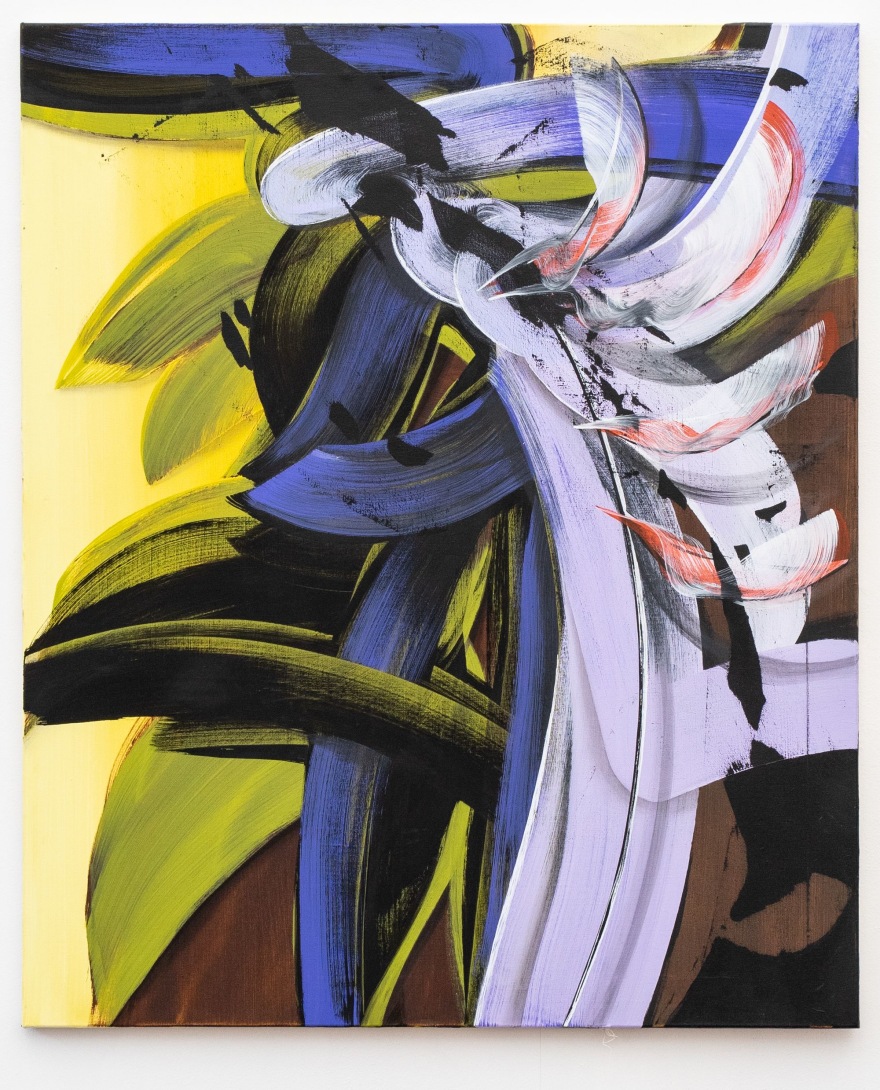