Synergy: more than the sum of its parts 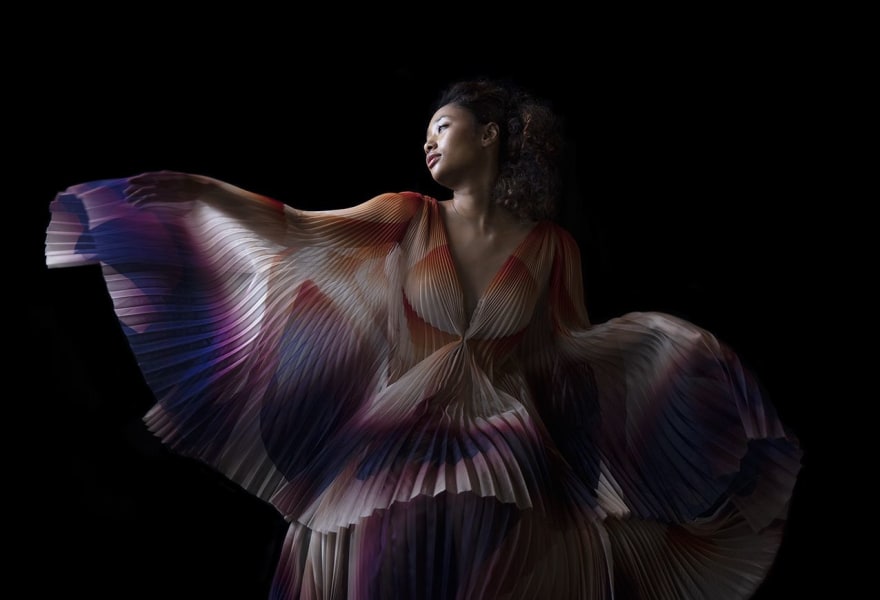 Sometimes a collaboration yields more than the sum of its parts and the latest exhibition in Rademakers Gallery is a good example of that. For the multidisciplinary series “Synergia”, two leading Dutch artists started a new collaboration: photographer Carla van de Puttelaar and designer Iris van Herpen.

When you look at the characteristic work of Carla van de Puttelaar, it may hardly surprise you that the photographer, in addition to a diploma from the Rietveld Academy, also obtained a doctorate in 17th-century Scottish portraiture from Utrecht University. Her photos are largely inspired by painters like the Dutch masters, which is especially evident in the magisterial way in which she uses light. For the Rembrandt House Museum in Amsterdam, she made a special Rembrandt themed series. Van de Puttelaar: “I have always been fascinated by skin and light. I look at how the light falls on people, how fabric shines and folds. How light can suddenly fall onto an eye or how it can illuminate a face. I think that moment is incredibly beautiful. My hunger for art is enormous. The image must transcend the portrait, it must be more than that. A kind of magic has to arise, as if you were looking at another world.”

Despite her striking signature, her setup looks insidiously simple: a portable black background and nothing more than the cool light that is streaming through the windows. Van de Puttelaar: "Even when I photographed Maria Balshaw, the director of the Tate, I was merely looking for a nice spot in the Tate Britain. I quickly set up a background and photographed her right there on the spot." Nevertheless, this simple approach yielded her several award-winning photos: the photo she shot for the cover of The New York Times Magazine in 2015 was voted one of the best photos of the year and her famous portrait of Astrid Holleeder for The New Yorker was equally hailed one of their best photos of 2018. That particular photo also won her the Silver Camera in 2019. For the ongoing series “Artfully dressed: Women in the Art World”, Van de Puttelaar captured nearly five hundred women from the international art world: from Amsterdam, London and Paris to New York. The women are all dressed in exclusive designer clothes in lavish fabrics.The project conceals an implicit message: the often subordinate and underappreciated place of women in the art world, especially in high positions.

For the series "Synergia", which can be seen in Rademakers Gallery until May 23, Van de Puttelaar collaborated with someone from the absolute top of the fashion world, who has been called the future of couture more than once: Iris van Herpen. This Dutch designer is known for the ways in which she merges art, science, technology and fashion. For example, Van Herpen recently co-designed the new building and interior of Naturalis, with Neutelings Riedijk Architects. Her sculptural, dreamy, groundbreaking and futuristic creations are made up of a combination of innovative techniques - including lasers and 3D printers - and classic craftsmanship. Van Herpen was the first fashion designer to use 3D printing technology in her designs and Time Magazine selected her 3D dress as one of the best fifty inventions of the year in 2011. Her designs have been worn by famous artists such as Björk, Lady Gaga, Beyoncé and Jennifer Lopez.

The award-winning designer has an interdisciplinary approach and collaborates closely with artists (including Marina Abramović), as well as architects, filmmakers, astronomers, musicians, photographers and choreographers. She does not consider fashion to be a separate discipline, which creates room to explore the border areas. Van Herpen: “Fashion is much more than just clothing: it is a means to express your identity, as well as the zeitgeist and personal emotions. There is beauty in contrast, new areas are being found at the crossroads between precision and chaos, art and science, the human touch and the high-tech, the artificial and the organic.” Movement, complexity and transformation are always central in her work, that is based on extensive research. Her research has even taken her to CERN in Geneva, where elementary particles are being examined. Van Herpen transforms abstract concepts such as smoke or electromagnetic waves into concrete designs. For example, her collection “Radiation Invasion” is about the invisible radiation that makes telecommunication possible. For the series “Micro”, Van Herpen explored the world of micro-organisms and “Synesthesia” was inspired by the neurological phenomenon in which some people can hear colours, feel sounds or taste shapes. Think of Hockney for instance, who translates sounds into colours, or musicians like Duke Ellington and Franz Liszt, who heard colours in certain notes.

The collaboration between these two artists produces amazing photos that amplify the power of both artists exponentially: the definition of synergy. The end result evokes associations with the paintings of famous painters from the distant art-historical past. The characters in the photos seem to be disconnected from any reality and the garments themselves almost seem to grow into complex organisms themselves.

The exhibition "Synergia" can be seen in Rademakers Gallery until 23 May. In addition to the "Synergia" series, there are also several couture dresses from Van Herpen on display.