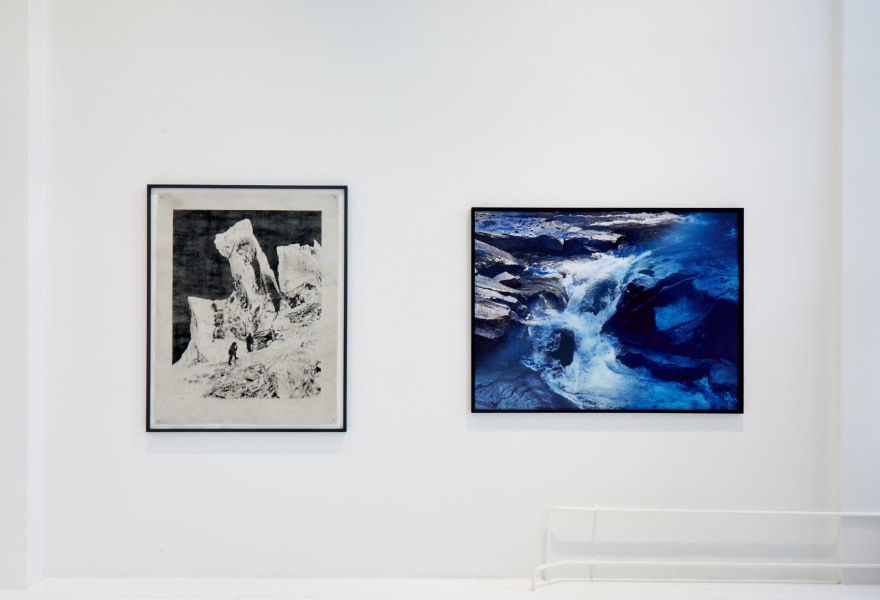 The year 2020 will not only go down as the year of the pandemic, but also as the hottest year on record. In Switzerland, some glaciers are melting at such a terrifying pace that they are being covered with a special, white and reflective textile during the summer: the patented Geotextile. This fascinated the Swiss photographer Douglas Mandry, who, after careful experimentation, found a way to use the fabric as a material for printing. Mandry's work can be seen at Bildhalle in an online-only exhibition on GalleryViewer until January 30.

For the series “Monuments", Mandry uses vintage photos from the early 20th century. These amateur photographs captured the landscape, but also effectively kickstarted mass tourism in the Swiss Alps. For that reason, you won't see any ski lifts or other symbols of tourism in these vintage images, so the majestic landscape takes center stage. By combining these photographs with the Geotextile, Mandry makes an effort to hold on to the Alps as they were, but now protected by the material. Mandry: “Lithography is an old technique that involves a lot of manual work. The outcome is hard to master and even harder to predict. So every print is a unique piece and every photograph will only be printed once.” The series ensured that Mandry was selected for the prestigious Foam Talent Award 2020: the award that Foam annually awards to 20 talents.

Douglas Mandry, Titlis I - from the series "Monuments", 2020, Bildhalle.

Mandry also conducted on-site research for the project: at the Gurschen glacier, near the Swiss village of Andermatt, where a team of specialists has been protecting the ice since 2015, using 4000 m2 of Geotextile strips from giant rolls of foil. This area is the recipient of the most hours of sunshine in the summer, causing the ice to melt in accelerated fashion, which in turn affects the melting of ice in other places. The textile, made of polyester and polypropylene, stabilises the temperature and slows down the melting process considerably. The material remains in place for the entire summer. The technique was used for the first time in Greenland in 2005. However, other long-term solutions should be considered as well, as covering the glacier costs € 65,000 annually, which is unaffordable for larger areas. Mandry reuses the Geotextile at the end of the season, which means that his work often contains traces and stains from the meltwater.

Douglas Mandry, Untitled I, from the series «Monuments», 2020, Bildhalle.

While Mandry was on location in Switzerland after the summer season to collect the Geotextile, he also used a number of ice blocks: specifically the ice that was protected by the fabric in the previous season. He placed these ice blocks in a homemade, wooden and large format camera. The light is projected directly through the ice onto photosensitive colour paper, through specific aperture shutters that have been pierced into the wooden camera. What follows is a process - which might take up days - in which the melting of the ice block, and with it the release of light, leaves a mark on the photographic paper. The physical melting process - and effectively: the problem that is both the result of and an acceleration of global warming - is thus captured on screen. The photo is subsequently developed in a dark room, creating an abstract image that almost resembles the cosmos. Mandry then prints the image on glass plates using an industrial printing technique. He captures the disappearance of the ice, that is so dangerous for nature, using traditional methods to show a painfully urgent problem. Mandry values ​​the abstract element in this half of the series because he sees it as a metaphor for the complexity of the underlying processes behind climate change - and the impossibility to visualise those in a single image. At the same time, he manages to make the urgency of it all considerably less abstract: the Geotextile brings the attempts to slow global warming very close to home.

View the Douglas Mandry exhibition in Bildhalle: only online on GalleryViewer (until January 30).
In this article