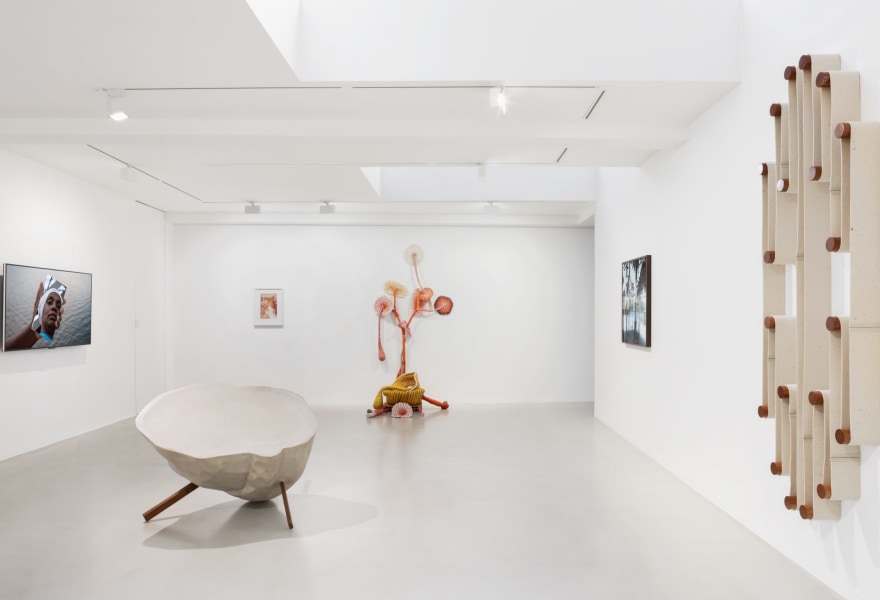 What do we know about contemporary Brazilian art in Europe? Not a lot. For most of the 18 artists selected by Frederik Schampers and Sebastiaan Bremer, it is the first time that their work is being shown in the Netherlands and Europe, making Já estava assim quando eu cheguei [It was like this when I got here] a fascinating introduction.

While Schampers and Bremer managed to attract both up-and-coming talents such as Desali and household names such as Carlito Carvalhosa and Leda Catunda, the average visitor will probably enter this exhibition fairly blank. Without knowledge of reputations, the artworks speak for themselves. The exhibition turns out to be a palace of mirrors, since Brazil is in many ways the opposite of the Netherlands. In this way, the exhibition not only answers the question of what Brazilian art is about, but also indirectly what is typical of Dutch or European art.

Relationship with nature
The most obvious difference is in our relationship with the natural environment. Whereas the Dutch landscape is largely man-made, nature dominates in Brazil. That may seem obvious, but it is a fundamental difference. If you look at the Netherlands, that is immediately clear. The Netherlands obviously does not have rainforests, but has a long history when it comes to water. The victory of the Dutch over water is not just the primal story in our county’s history, it also translates into our public administration until today: from the late medieval water boards to the polder model and then prince royal Willem Alexander who committed himself to water management for the UN.

The relationship with nature is reflected in a number of works in the exhibition. In the work of the Dutch artist Sebastiaan Bremer for instance. Bremer works in New York and is married to a Brazilian. He got hold of the slide archive of his father-in-law who was involved as an engineer in the construction of Itaipu dam. Prints of the discoloured slides show the waterfall that had to make way for the dam. Although the dam provides electricity for the region, Bremer has doubts whether the dam is a future-proof solution if so much nature has to be sacrificed for it. In fact, the dam strips the environment of its character. With ink, Bremer turns history back and brings the waterfall back to life.

Spanish artist Daniel Steegmann Mangrané, who lives in Brazil, focuses on deforestation of the rainforest. Mangrané uses hand-blown branch-shaped vases to show what you are left with when in some places only 7% of the original rainforest remains.

On Pampulha #2 by photographer Mauro Restiffe, you look through the glass of an empty building. The reflection of the glass makes it seem as if the pillars supporting the ceiling have grown into the trees outside. They coincide exactly. Restiffe took the photo in a suburb of Belo Horizonte, the garden city of Pampulha Modern Ensemble. The word Ensemble refers to the goal that architect Oscar Niemeyer and landscape architect Roberto Burle Marx had set themselves: to harmonize man and nature on the basis of the new possibilities offered by Modernism. The vacancy suggests that Niemeyer's vision has not fully materialized, except in the photos of Restiffe.

Colonial past
Another difference with the Netherlands is the colonial past. Where the Netherlands acted as colonizer, Brazil is a former colony of Portugal. This collective experience is also reflected in the work from which the exhibition takes its title. Já estava assim quando eu cheguei by Carlito Carvalhosa is a sculpture - an inverted version of the Sugarloaf Mountain in Rio de Janeiro Bay with a large iron cross running through it. The cross, the title of the work and the inverted mountain refer to the colonial past. The name Sugar Loaf Mountain was given to the mountain by the Portuguese and with that they also claimed the mountain from a linguistic point of view, even though the mountain was already there before the Portuguese set foot on Brazilian soil. It’s this anachronism which still resonates today, Carvalhosa wants do away with.

In her film Other Foundations, Aline Motta goes in search of her roots and deals with the underexposed history of the African diaspora in Brazil. She sailed down the rivers in Lagos (Nigeria), Cachoeira (state of Bahia) and in her home state of Rio de Janeiro, recording the shared history through the people, the water and the bridges. "I have used the water as a vehicle for connection, for retrieving hidden memories and a quest to belong," Motta says of Other Foundations.

Art you want to touch
“Typical of Brazilian art is that painting is not the dominant medium. Also, no distinction is made between men and women. In fact, the best-auctioned Brazilian artists are women”, says Valentijn van der Hulst of Galerie Ron Mandos. In this group exhibition too, 10 of the 18 artists shown are women.

“In addition, it is work you want to touch. You’re obviously not allowed to do so, but I understand the urge. This is due to the organic shapes and colours often used, ”says Van der Hulst. The latter certainly applies to the crimson-coloured beads and terracotta bricks in the work of Maria Nepomuceno and the saturated pastel shades in Desali's work.

The use of materials and shapes are also more exuberant than we may be accustomed to. For example, Leda Catunda explores the boundary between the flat surface and three-dimensional work by applying tongue-shaped fabric flaps on a round cloth. She treated those tongues with red, gold and silver acrylic paint, making the work very cuddly.