The gallery of… Cokkie Snoei 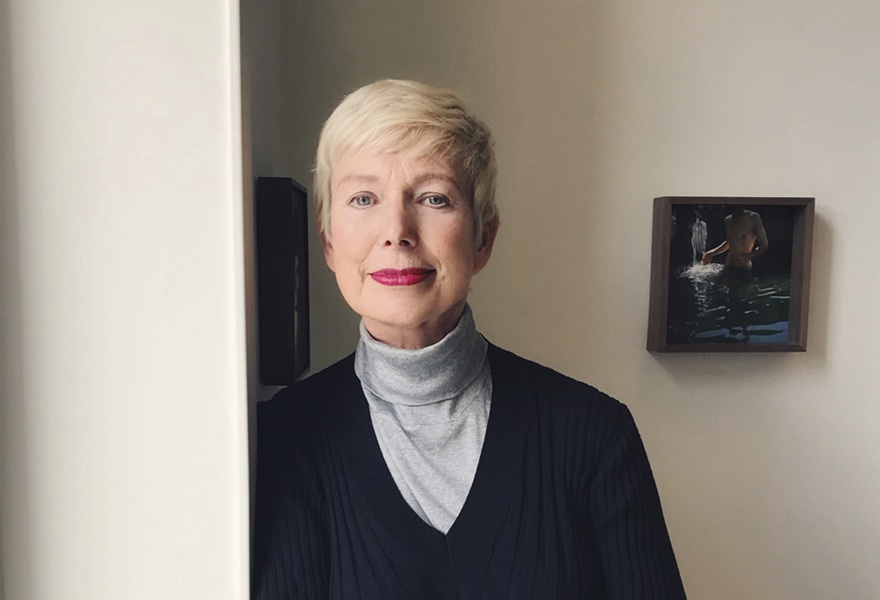 Photo: Zuza Krajewska. This photo was taken at the Mauritsweg gallery the day after her show with Benyamin Reich opened, March 2019.

Not in the sense that my parents collected, but my father sometimes took us to a museum. That in itself was special, because my father and mother were inland skippers. That meant a lot of sailing and little time ashore.

When I opened my gallery in 1989, they came to see every exhibition. I sometimes worried about that, for example when I showed very graphic photos of Larry Clark, Nan Goldin, Andres Serrano or Pierre Molinier. My father would take a good look around, point to a particular work and say, "This one is the best!" And he was right.

One of the first exhibitions I made featured paintings, watercolours and ceramics by Pieter Kusters. Pieter often poses naked, in a way that female nudes were depicted: nice and warm, woolly and stuffed. My father was immediately enthusiastic about a large painted nude. He really wanted to buy that, but I did not agree, because I did not always want to come face to face with that canvas when I came to visit my parents, in their otherwise classic interior. 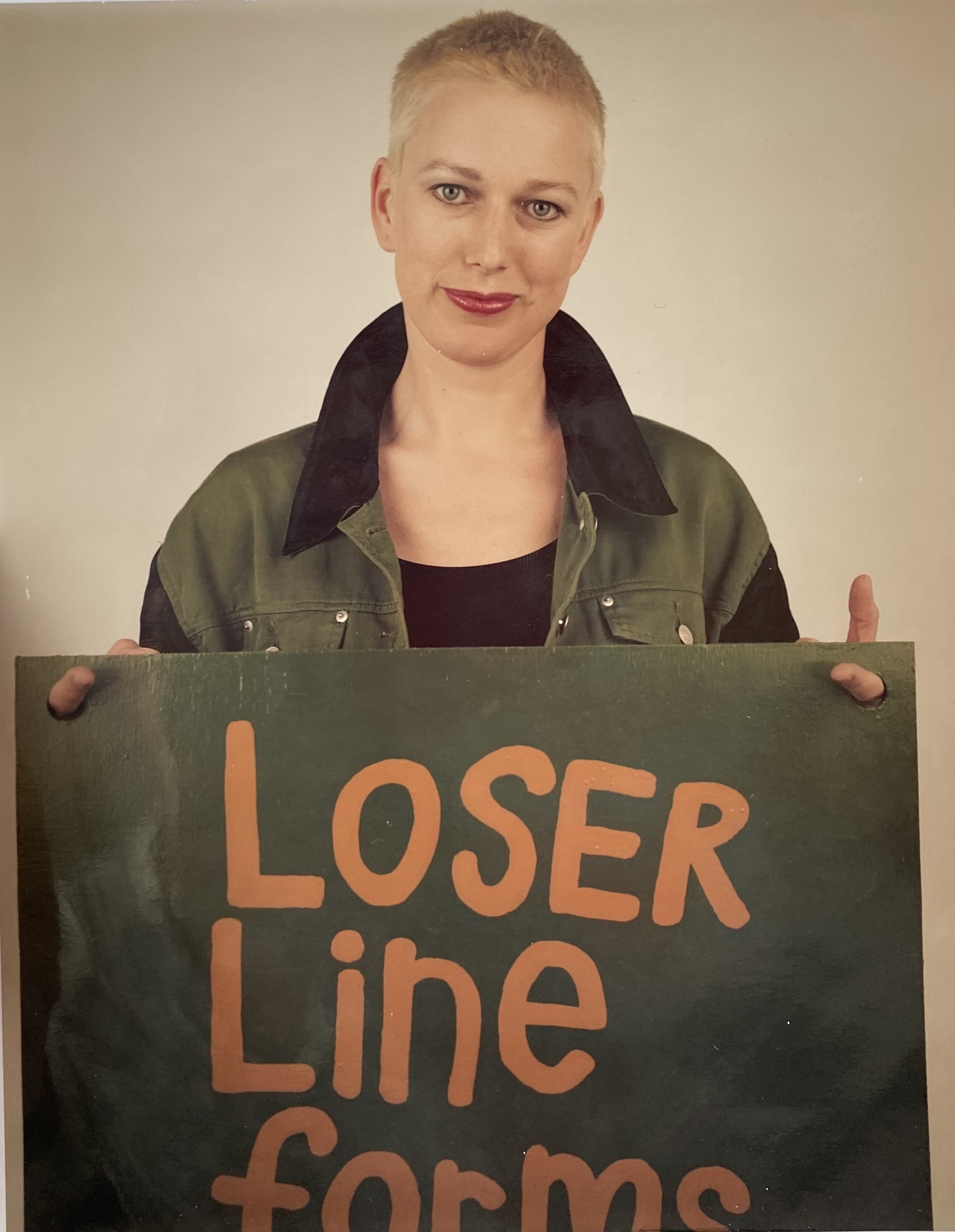 Photo: Ari Versluis and Gina Kranendonk, taken at the KunstRai in Amsterdam, June 1993.
Cokkie Snoei with a painting by Cary Leibowitz. In October 1992, she made an exhibition with him and Lily van der Stokker.

How have you come into contact with the art world?

I knew many writers and visual artists through the cafes I used to visit in my early years. After teaching secondary school for a short spell, I became a copywriter at Lintas in the early eighties, which was the largest advertising agency in the Netherlands at the time.

As a copywriter you always work with an art director. Certain specialist items, such as illustrations and photography, were purchased through external agents. That's how I got the idea to start an agency for a number of interesting artists around me. There were hardly any galleries back then. Certainly not in Rotterdam. 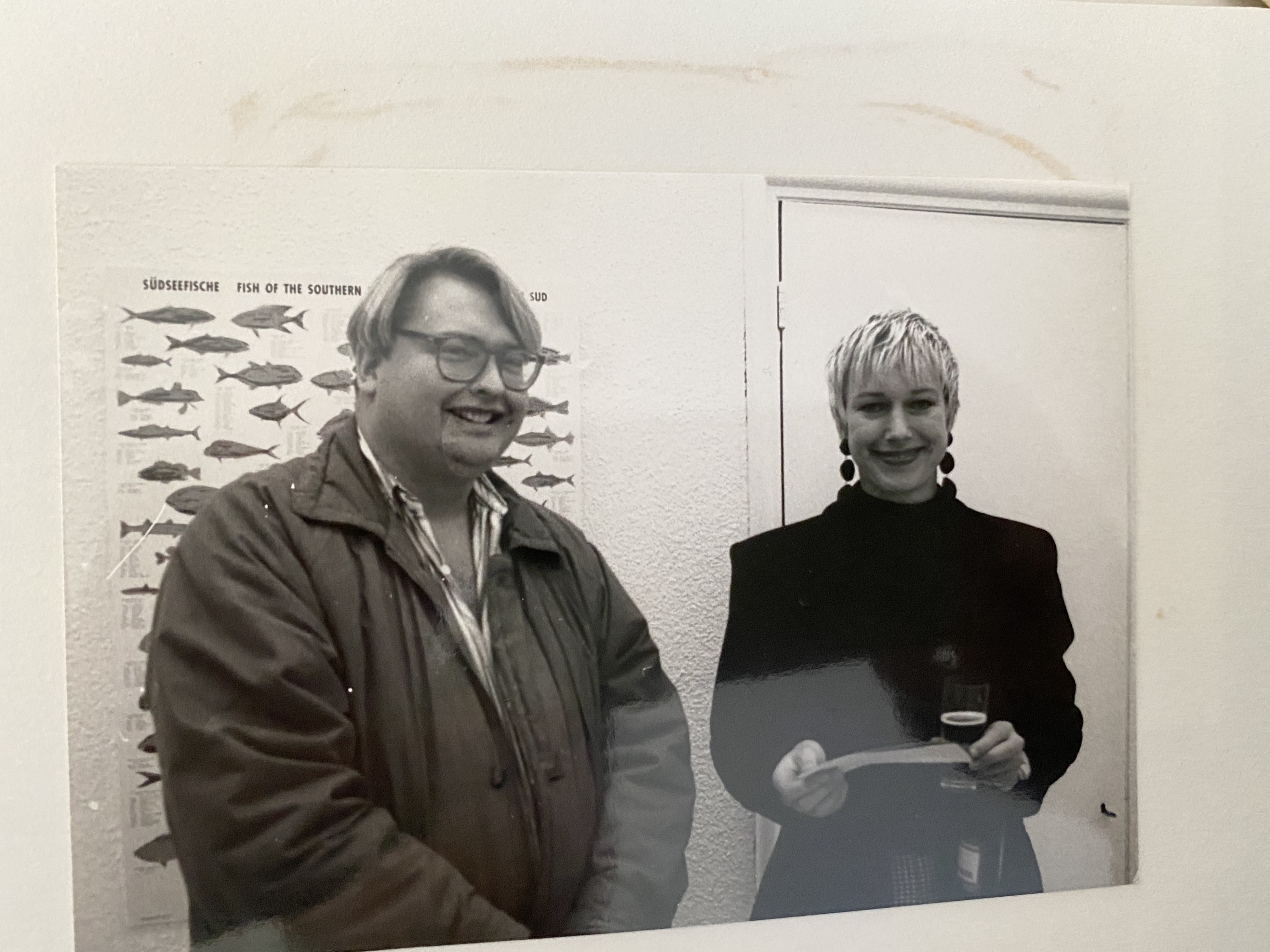 Like I said, I didn’t immediately start with a gallery, but with a heavy suitcase with documentation folders of about ten artists. I mainly visited companies that were going to establish themselves somewhere, had just moved or were going to expand and tried to interest them in contemporary art. That worked wonderfully well. After a few years I wanted to reach a more informed audience and also make exhibitions, and in April 1989 I started a gallery on Witte de Withstraat in Rotterdam. An enormous "white cube", for which I paid a hefty rent. In retrospect, I would have preferred to start more modestly and participate in international art fairs earlier on. The first foreign fair I took part in was the Unfair in Cologne, in 1993. 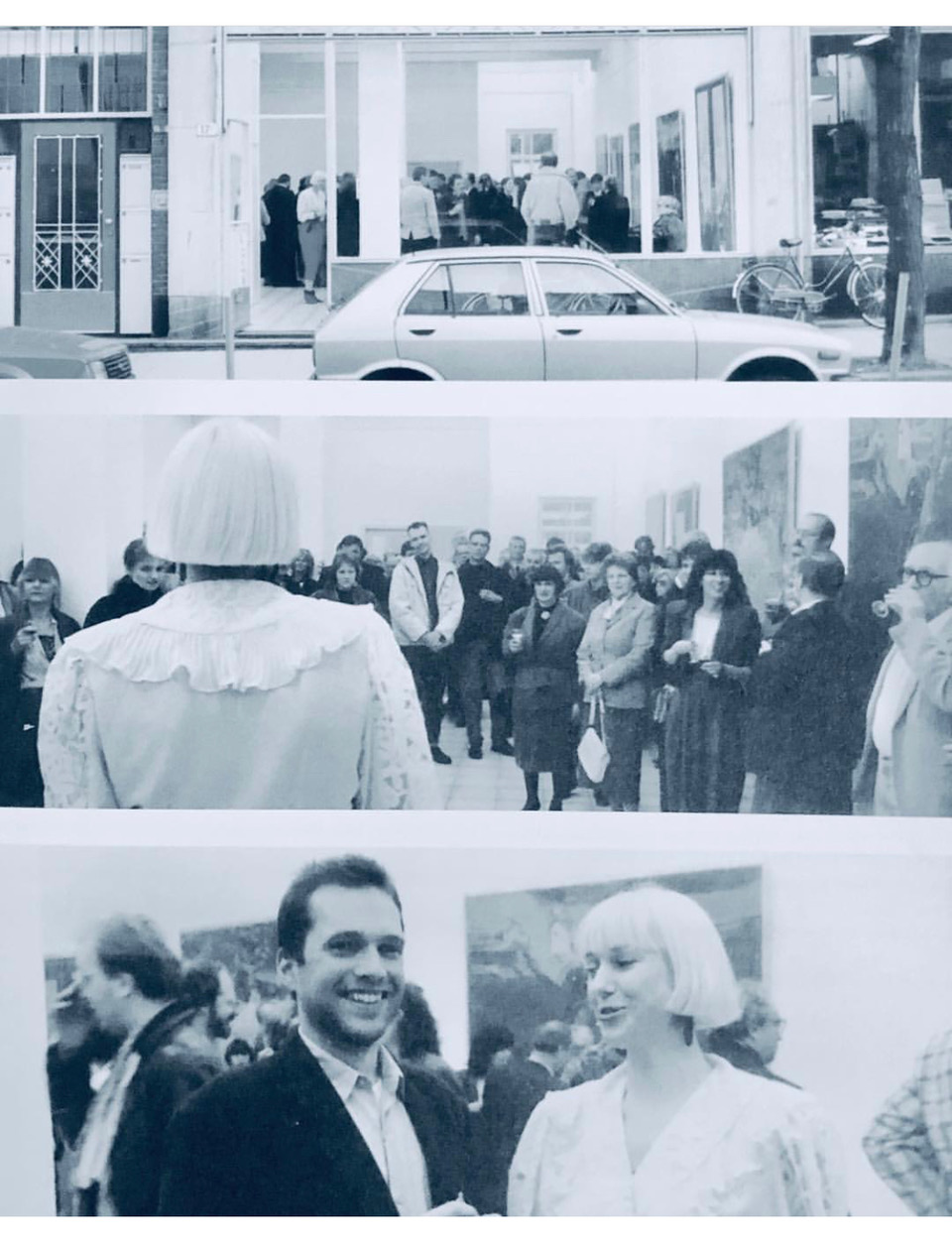 I can still agree with the text that has been on my website for years under the "profile" tab. I have always exhibited many foreign artists, as I felt - and still feel - the work here is sometimes 'too Dutch'. I still love to discover and show young artists, but at the same time I also like to showcase "obscure" work by older or deceased artists. Consider, for example, the photos of Pierre Molinier, Claude Cahun or Wally Elenbaas. Or the drawings of Pierre Klossowski.

What part of being a gallery owner do you like most?

Discovering new artists and their work. And then trying to sell it. The best moment is when you can tell from a customer's gaze that he or she is going for it.

Are there any galleries at home or abroad with which you feel an affinity?

I feel related to a number of international galleries that I started at about the same time. However, most of these galleries have grown into mega-businesses, which are now considered part of the establishment, while I still have the feeling that I am 'young and promising'. Haha, nice and naive! 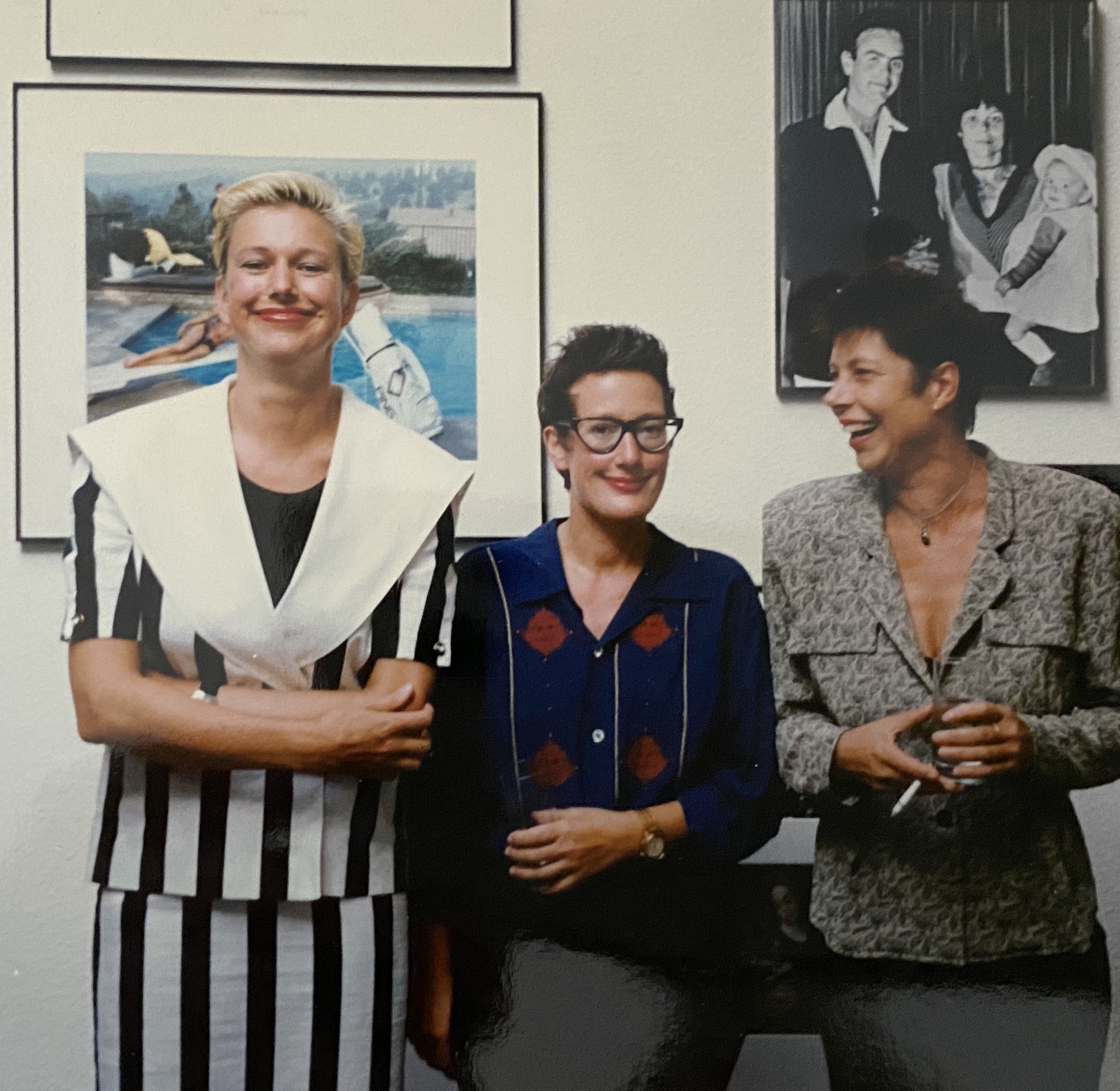 Photographer unknown, taken during the opening of Pink and Lydia Schouten (they are in the photo), September 1990.

Rather, had wanted to represent: Matthew Barney! To be honest, I don't know what he is currently making, but I first saw his work at the1992 Documenta in Kassel, in a crazy, unsightly place in a gloomy basement. A mix of weird performance videos, in which he himself acted as an acrobatic construction worker half naked, surrounded by all kinds of bizarre, very beautifully made objects, which were the props from his films. It may sound dramatic, but then I knew why I found visual art more exciting than literature.

An awful lot, too much to mention, really. The "art world" has become much more professional, international, tougher and more like any other business. At the same time it has also become more "democratic", more easily accessible. Anyone can look up anything on the internet, or visit an art fair with their children. 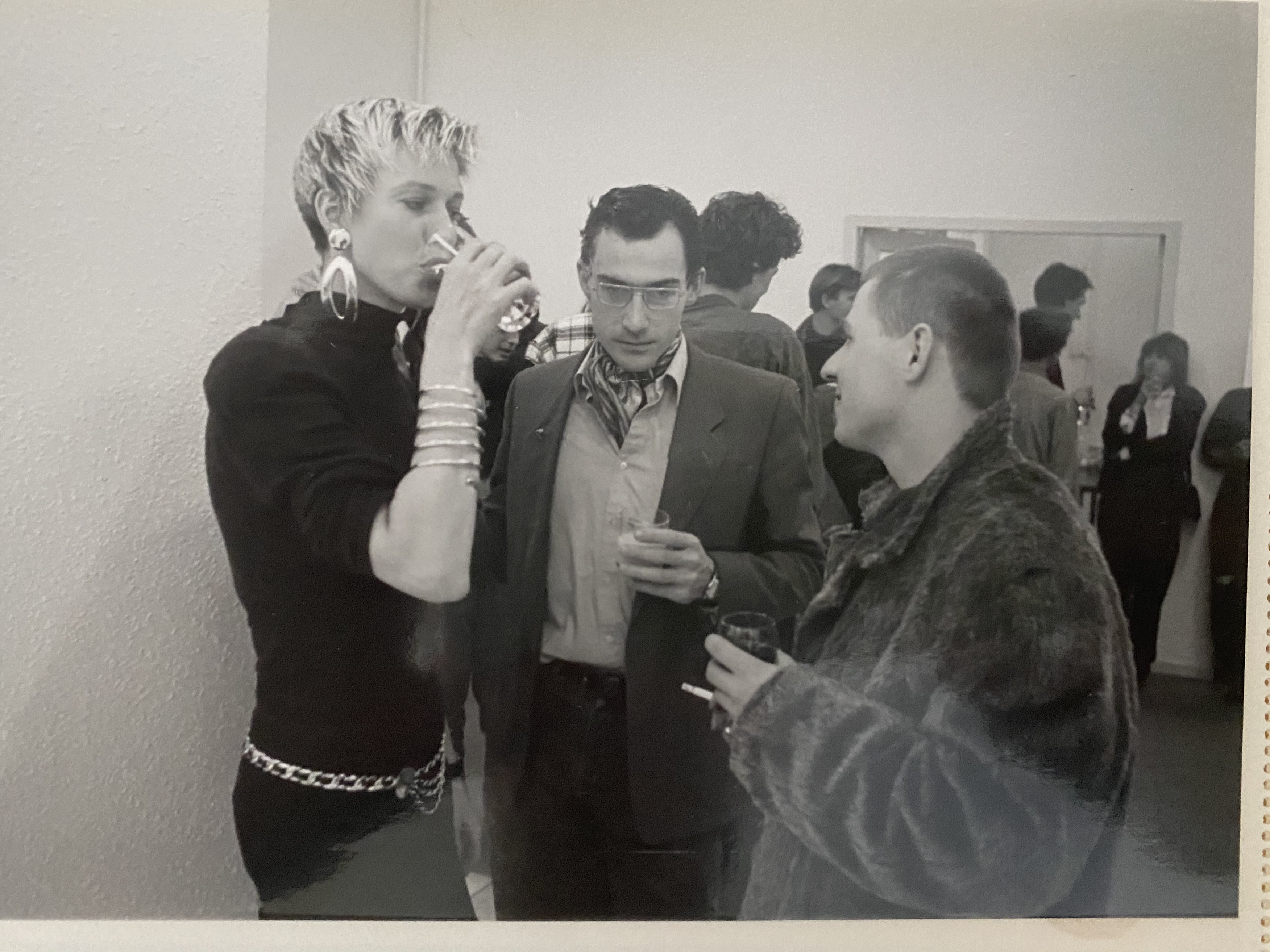 What / who do you collect yourself?

I have a lot of work, especially from the artists that I have shown. And just to be clear: I bought those works. When I just had the gallery, I didn't buy myself. Making the exhibitions were enough fun for me. Yet, at some point I started to get greedier. To this day, I always buy after the exhibition has ended, I give customers the first choice. Of course, I also occasionally bought a work to support an artist.

Has the pandemic influenced your thinking about the art world?

Covid-19 has been very good for everything and everyone in the sense that "can they just tone it down a bit"? It seems as if the world has come to a standstill from March 2020, and I don't find that unpleasant.

When we talk about visual arts, for quite a few years it was mainly about money. Works of art by young artists that within a few years - when they are presented by certain top galleries at the top fairs - are sold for hundreds of thousands, I find absurd and bad for art.

Now that everyone hasn't been running from one art fair to another for a year, there is more time for the artists to make good, substantively interesting work. And for the gallery owners to view and discuss that work in peace, without the pressure of those very expensive fairs, which are constantly hanging in the air like a thundercloud. 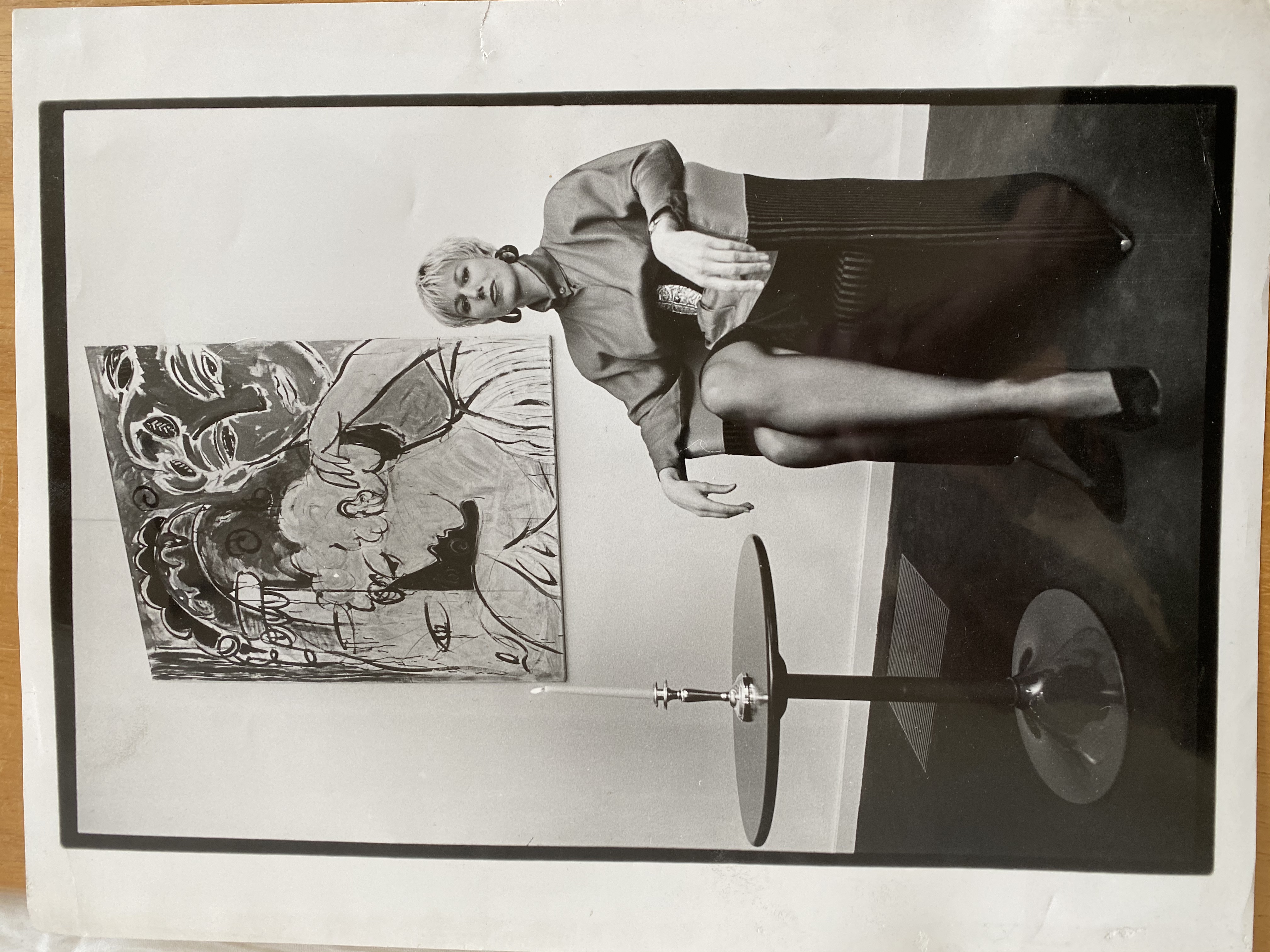 Photo: Jerry Lampen, April 1987. Taken in restaurant Parkheuvel, where I used to hang works for a while.