Contemporary surrealism and a new kind of vanitas 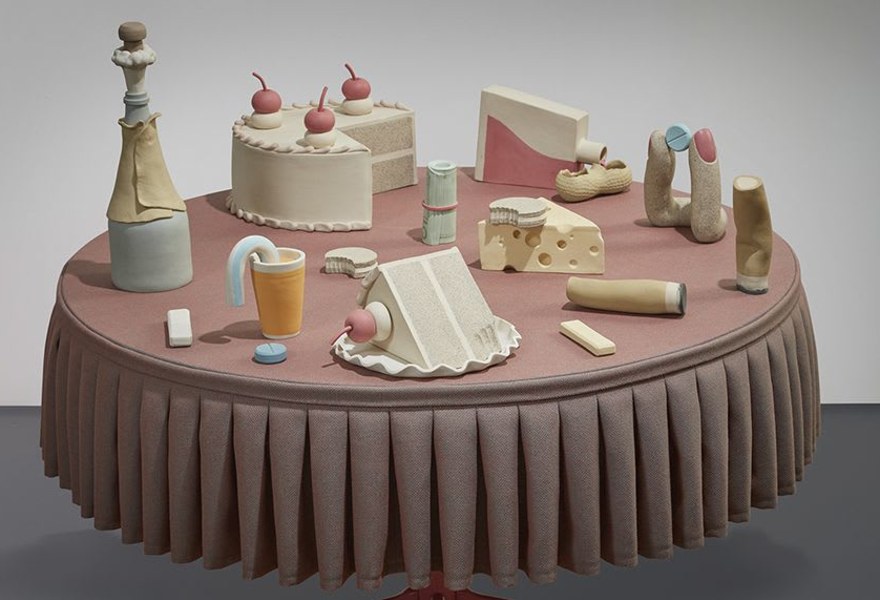 rodolphe janssen in Brussels is currently showing two exhibitions: a solo exhibition by the Belgian-Iranian artist Sanam Khatibi and a solo by the New York based artist Genesis Belanger. Both artists are highly regarded: in 2016, Khatibi was mentioned in the Artsy article “These 20 Female Artists Are Pushing Figurative Painting Forward” and again in 2018 in the article “Breakout Talents”. Genesis Belanger's work was on display last year in the New Museum in New York and at Perrotin before that. This show at rodolphe janssen will mark her first solo exhibition in Europe.

Sanam Khatibi was only eight when she and her family were forced to flee Tehran, during the Iraq-Iran war (1980-1988). After living in the United Kingdom and Denmark for a while, the family ended up in Brussels. Khatibi: “Being bombed and thrown off your bed in the middle of the night, having to flee your country not knowing whether you’ll ever come back, those are memories that stick with you for life.” Yet Khatibi opposes the somewhat reductive idea that it is all-determining in terms of her work. Instead, she thinks of her paintings, embroidery, tapestries and sculptures as a mishmash - and sometimes opposition - of influences, cultures and traditions. For her previous, large scale oil paintings, she was inspired by a variety of influences, including, but not limited to Hieronymus Bosch, Frida Kahlo, Impressionism and the Renaissance. In these painting by Khatibi, we see only women and wild animals. They feel almost translucent against the romantic pastel-coloured landscapes - often painted in surreal colours - and these characters seem to give in to their basest urges and desires. The women are shown as both vulnerable and as powerful predators. Khatibi: "I think the core of my practice deals with our primal impulses, bestiality, and our relationship to power structures. I question our ambiguous relation to dominance and submission. I am interested in our ambivalent nature to power, violence, and sensuality, and how closely they can be related." These paintings form a contemporary interpretation of surrealism, which is why her work was shown in the surrealist exhibition "The Tears of Eros" in the Centraal Museum in Utrecht this summer. 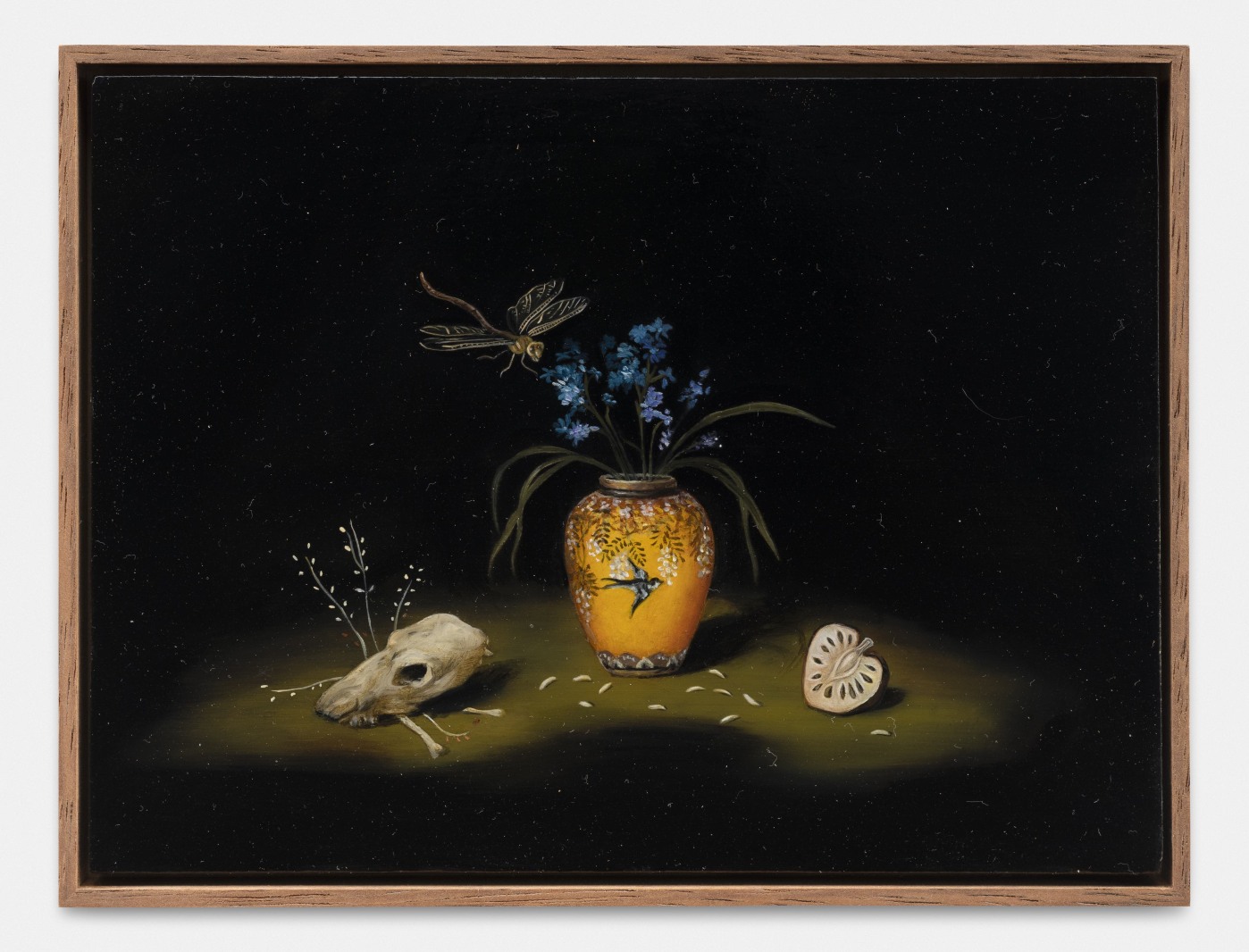 Khatibi has previously shown her work at solo exhibitions in institutions such as the The Cabin in Los Angeles, the city where she also completed a residency program. The exhibition in Rodolphe Janssen also includes her most recent work: a series of interpretations of the classic vanitas genre, in which withered flowers, skulls, fallen objects and extinguished candles form a visual metaphor for vanity and the transience, ephemerality and thus the utter meaninglessness of life. Khatibi offers a completely unique and, above all, contemporary twist to this classical genre from the seventeenth century. 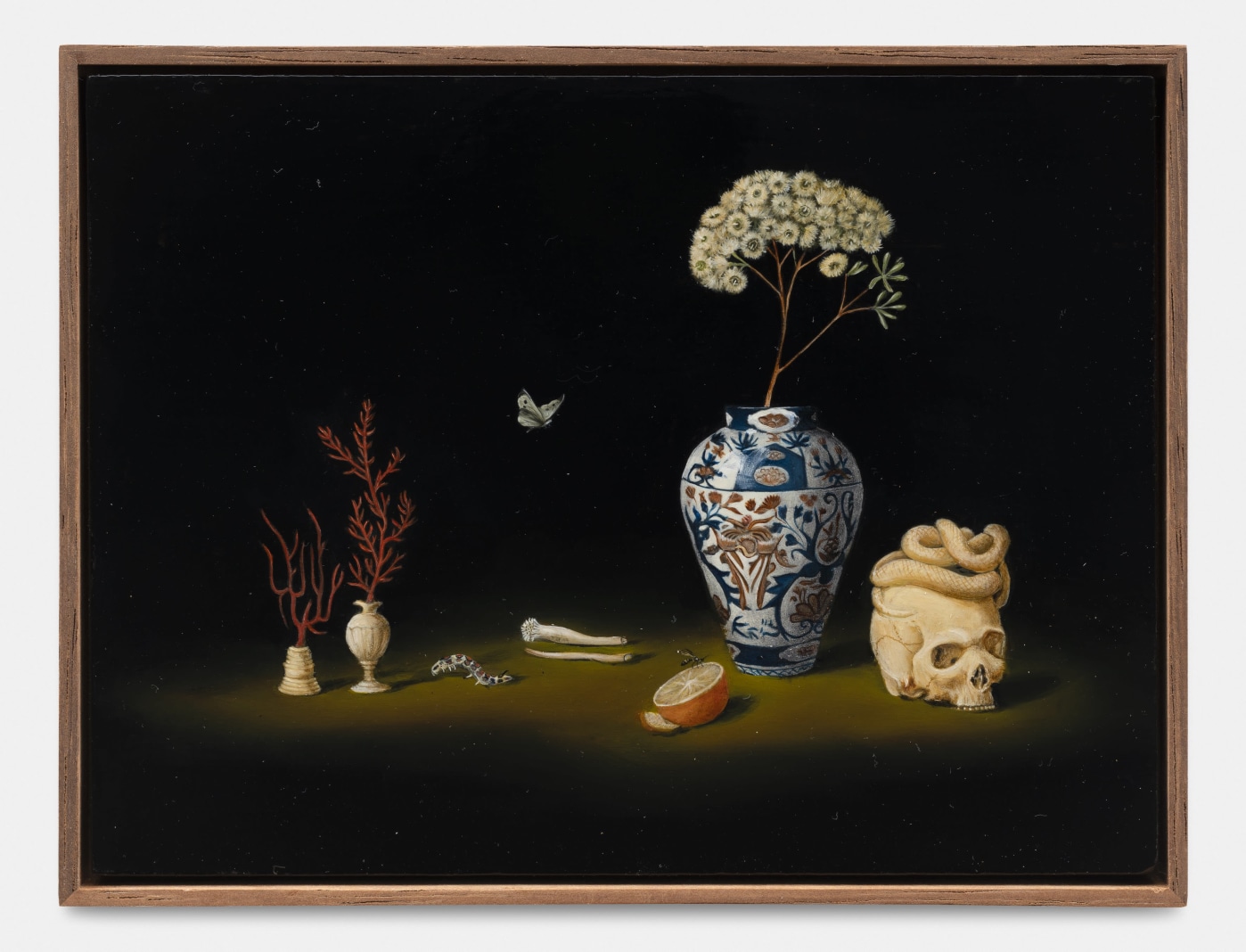 Het werk van Genesis Belanger's work on the other hand provides an interesting contrast to Khatibi's work. But her work is also a surrealist interpretation of - and a commentary on - the same society, and the role of women in it. Belanger says she grew up as the daughter of two hippies and her childhood was therefore characterised by a lot of movement between American cities. She took classes at various design institutions in New York and Chicago and did an internship at Moschino in Milan - where she experienced how the boundaries between fashion and art can be easy to cross. After that, she made props for commercials for five years, for famous fashion brands like Chanel and Tiffany’s. But Belanger was looking for more and she obtained a master's degree in Combined Media at Hunter College in New York. The artist appropriates stereotypical images surrounding "femininity" while simultaneously criticising them in an idiosyncratic way. It is no coincidence that these are the kind of objects that she helped sell in her career as a prop stylist. Belanger: ”Advertising is brilliant people using visual languages to manipulate our desire in the service of capitalism. Moral judgments aside, this is fascinating to me. Beauty is not empty; it can be a powerful tool.” 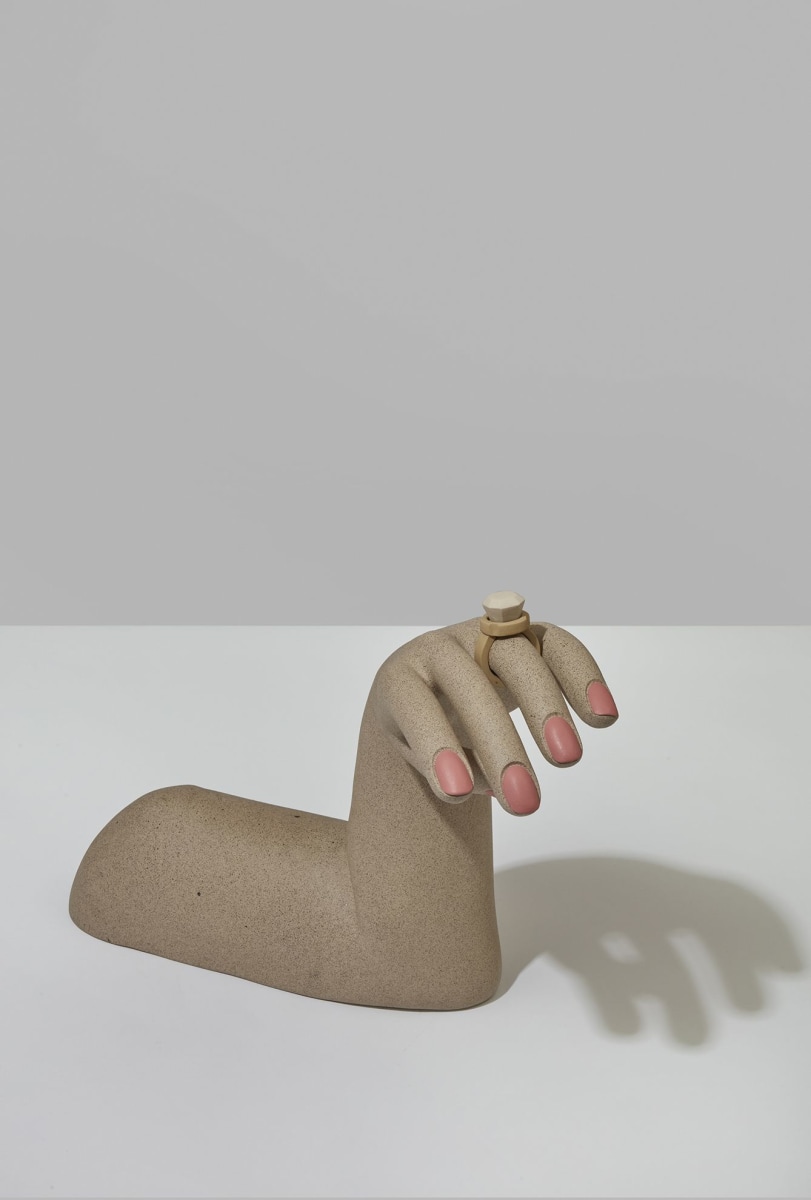 Genesis Belanger, What's love got to do with it, 2020, rodolphe janssen.

Her objects include almost fetishised and freshly painted women's nails, ladies' bags, high heels, cigarette butts and lipsticks: all in innocent-looking candy colours. She provides these everyday objects with human traits, making them look like us on an uncomfortable and eery level. Belanger applies humour and surrealistic elements to expose the implications, assumptions and (not-so-) hidden messages behind these symbols, in a commercial world in which womanhood is often simplified and abstracted, and women are often objectified. Belanger: “I wanted to build narratives that dealt with some of the ways that women are complex.” She also introduces false symbols of women's liberation, things we have been talked into buying by advertisers, such as uncomfortable bras, pastel tranquilizers and large handbags (that, in her interpretation, have teeth instead of a zipper). For her objects she uses "sad pastel" colours, which may appear cheerful, nostalgic and innocent, but contain a dark, acid edge at the same time: as if they were discoloured by the ruthless sun. Belanger doesn't glaze her works, but adds powder pigments to the clay instead. 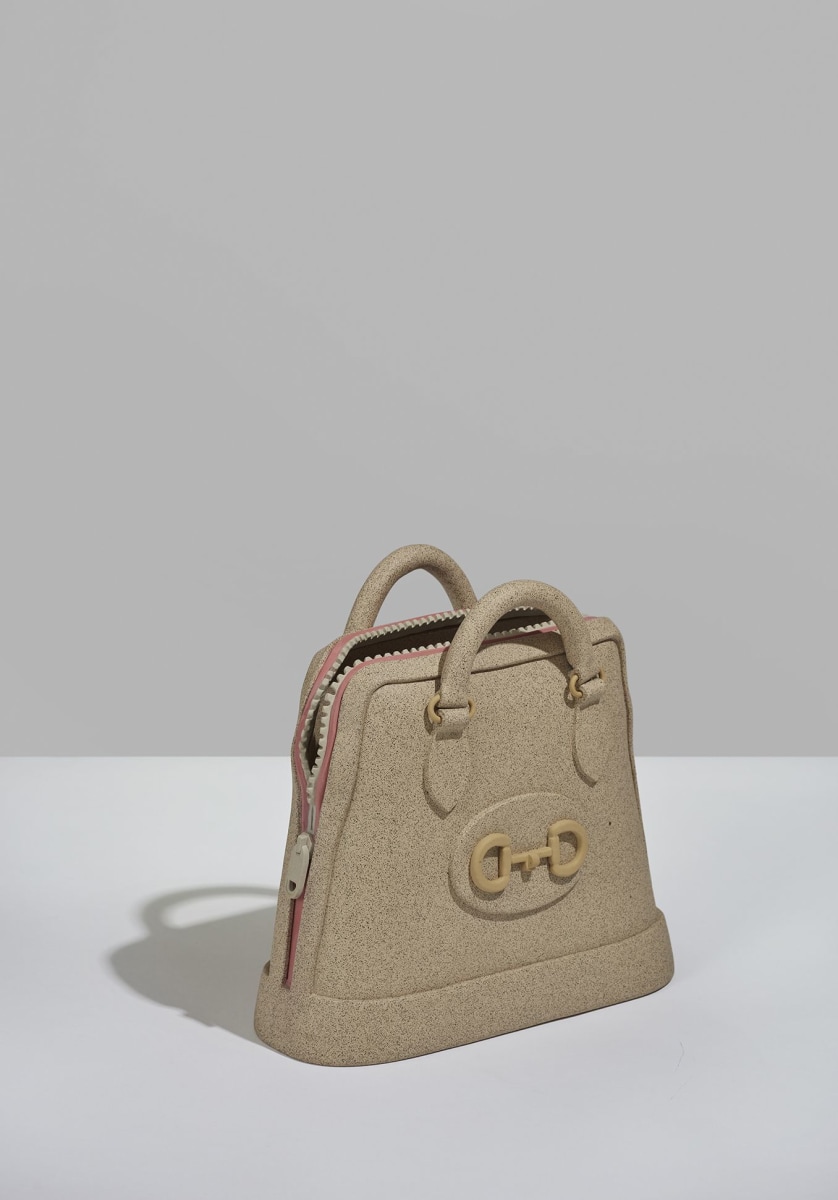 Belanger observes a world that is becoming increasingly surreal, in which it seems impossible to be truly surprised by anything anymore. “I think this relates directly to the idea of the uncanny, something familiar but strange and uncomfortable, where it should be comfortable. For a moment, it seemed like we were progressing towards our goals of dignity and respect for all. Then, poof! In a cloud of smoke, we are suddenly a country digging in its heels in support of the heteronormative, white, patriarchal, tired, and old status quo.”

The solo exhibitions‘Cyanide’ en ‘The Party’s Over’ will be on show at Rodolphe Janssen in Brussels until January 30, 2021.
Please note: make sure to consult the gallery's website prior to a visit as local and national COVID regulations may apply.