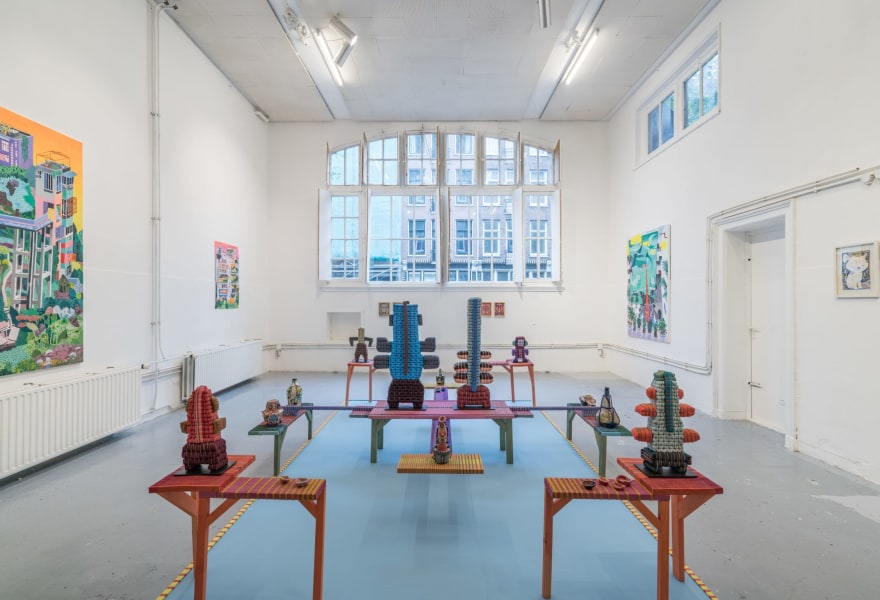 Galerie Fleur & Wouter started out as as a popup gallery at the request of two artists, but the gallerists were immediately passionate about it. The gallery has been around for several years now. Fleur Feringa and Wouter van Herwaarden have set themselves the goal of making art more accessible, especially for younger people. The gallerists have managed to achieve this in various ways, for example by organising an auction in which art could be traded for anything but money. But also by coming up with dynamic subjects for exhibitions, such as serial killers and romances between artists.

Wouter: “Our goal with the gallery is to introduce young people to art and to get them to want to buy art. We do this by keeping works affordable and organising exhibitions around themes that appeal to young people.”

The duo also looks at the ways in which they can add to the existing art landscape and they also focus on topics that are important to many young people: such as inclusion, representation and accessibility. Fleur: “The work that can be seen in museums is far from inclusive. Art can change your view of the world. You can learn from it, because artists are like visual philosophers. As long as there is no equality in representation, we miss important lessons and that is a shame. Until that imbalance is corrected, underrepresented groups must be heard twice as loud. We have never made an exhibition without the work of women. We don't have to put in any effort at all, because there are just as many women who do very good work as there are men who do. In our thematic exhibitions, we look for different perspectives, which often automatically leads to a diverse group of makers.” The exhibition “Sight by Sight”, with work by Johan Kleinjan and Saar Scheerlings, is on view in the gallery space until 1 November. 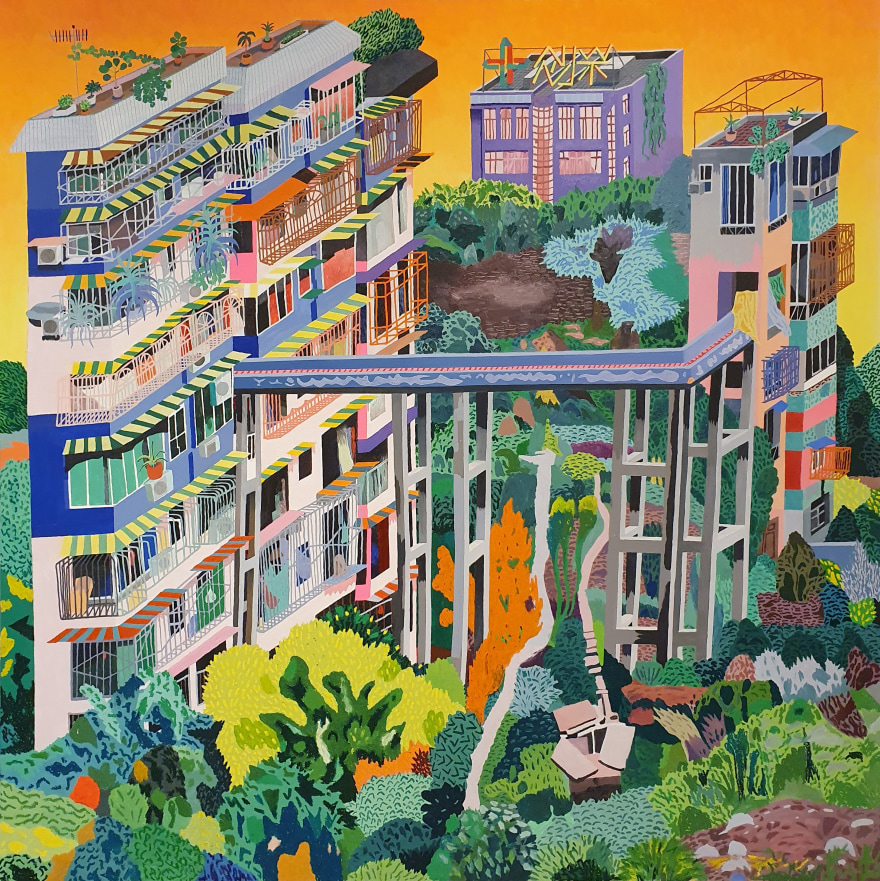 Johan Kleinjan has spent a lot of time in Asia. First as an exchange student in Tokyo where, due to the language barrier, he was often encouraged by his teachers to venture out with a sketchbook. Later he spent a period in Taiwan with a work contribution from the CBK, after which he took up an artist-in-residence position at the Chinese Institute for Provocation in Beijing, a collaboration with the Mondriaan Fund. For that reason, Asian culture in all its aspects plays an important role in his work. These are often unexpected perspectives, such as the characteristic high-rise buildings in Chinese cities that initially - just like the residential towers in East Berlin - appear minimalist and impersonal. But on closer inspection, they are often customised with a variety of objects, including urban jungles, bird cages or air conditioners. This is also interesting because in the west, China is often synonymous with an unpersonal kind of uniformity. Due to mysterious visa problems, Kleinjan was not able to travel to Beijing until six weeks after his scheduled plans. So afterwards he spent some time in the city of Chongqing, a mountainous city with a distinctive monorail. Kleinjan: “In this city, much further south, I came across many residential towers, with complete jungles growing on the balconies or roof, especially in the somewhat older buildings.” The works on display in the exhibition at Galerie Fleur & Wouter are the result of a combination of his memories and diary excerpts, which makes the viewer wonder which elements are part of the fantasy life that the buildings have come to lead in the artist's head. Kleinjan graduated as an illustrator from the Willem de Kooning Academy and was part of the art collective Antistrot for 10 years. He made illustrations for HP / De Tijd, de Volkskrant and Trouw, among others. His art works, which are characterised by a certain rawness and an explosive use of colour, initially appear to be pure observations, but are also inspired by Kleinjan's diverse fascinations, including the television programme ‘Temptation Island’. 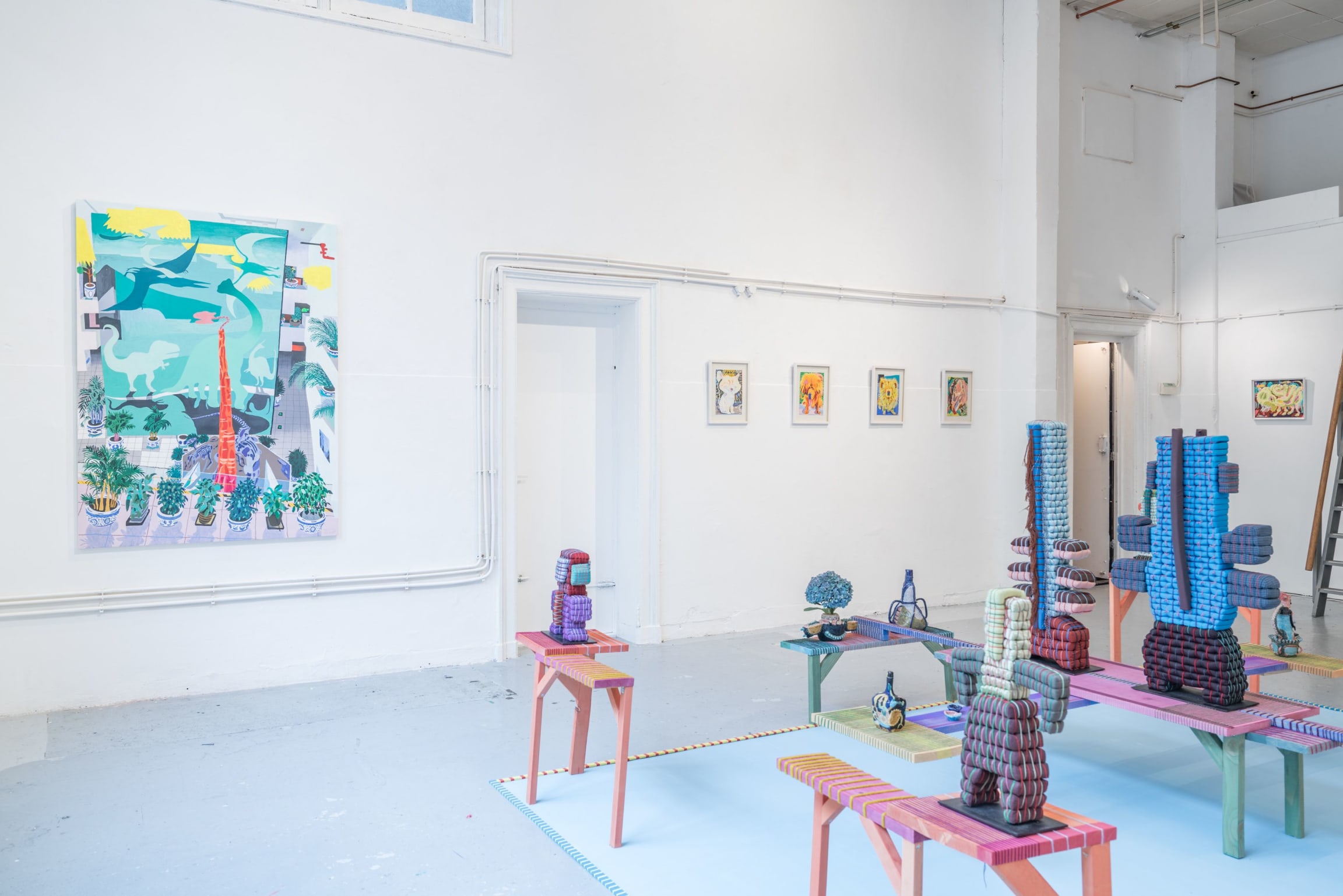 In this exhibition, Kleinjan’s work is combined with the sculptures of Saar Scheerlings. For her intuitive works she regularly uses remarkable and recycled source material, including used fabrics from fashion houses and theaters, but also mattresses that remained after the bankruptcy of a holiday park. Her work is visually linked to ethnographic objects that are animated or spirited in a certain way, such as a talisman or a religious artifact. This results in a series of new material objects that are part of a fictional civilization. She hopes to provide more inspiration and spirit for our daily lives. Scheerlings shows a great admiration for craft in her practice, but also notes that that same craft has recently taken on a different role. She observes how craft has become increasingly elitist and niche, with a process that must be as complicated and conceptual as possible. On the other hand, her main concern is making something with your hands, where it’s absolutely fine it if is clear to the observer how the object was made exactly. Scheerlings is curious about how the things that surround her work: she was even a cook for a while for that reason. In this exhibition, we see objects marked by a certain humanity and by imperfections, contrasting with the speed of our technology-reliant society, that focused on producing disposable items. She also looks at the folding techniques of, for example, a tea box or techniques and structures that she encountered during her travels to places including a weaving village in the Himalayas. Scheerlings invites you to think of your own interpretations when you see her work, because nothing is as hybrid - and subject to interpretation - as culture.

The “Sight by Sight” exhibition will be on show in Galerie Fleur & Wouter until 1 November.