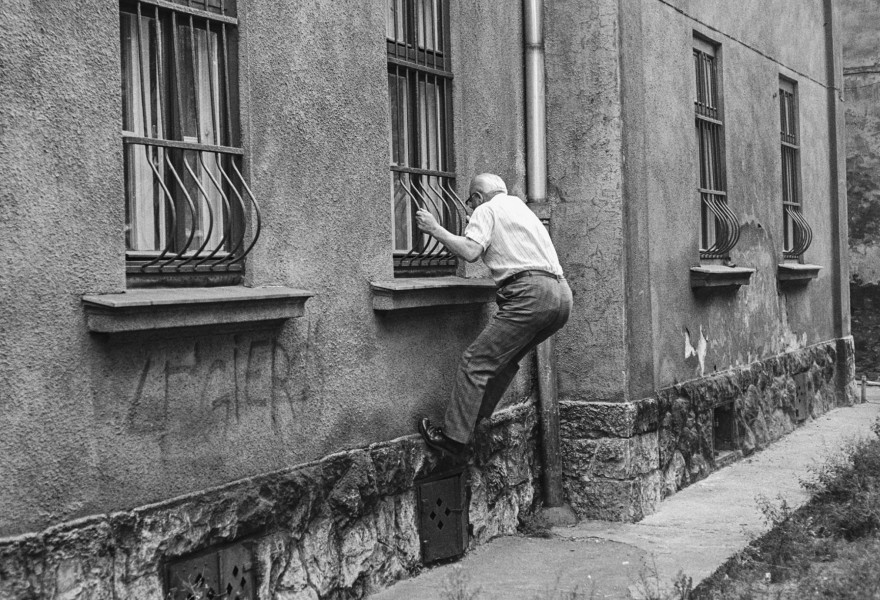 To look inside an apartment, an elderly man pulls himself up onto the steel railing in front of the window. Why he does this and what he is looking at remains a mystery. More things remain unexplained in Hans van der Meer's black-and-white shots from Budapest in the mid-1980s. The everyday scenes in Minor Mysteries are both witty and wry, but above all, empathetic. Those who take a step back will see a disconcerting portrait of the waning days of communism and a prelude to Van der Meer's later work.

Hans van der Meer (Netherlands, 1955) completed his education in technical photography in 1976 and attended the Rijksakademie in Amsterdam from 1983 to 1986. In 1998, he broke through to a wider audience with Hollandse Velden (Dutch Fields), which was followed by the spin-offs Keepers, Flemish Fields and European Fields. After that, his work included Netherlands – Available from stock (2012) and , fellow photographer Martin Parr bought a print of each of the 68 photographs in the book. While signing the prints, Parr commented that the then 42-year-old Van der Meer would be remembered for this series because it combines all the characteristic elements of his work.

The book Minor Mysteries, which appeared in a different edit in 1987 as Quirk of Fate, also contains many elements that are typical of Van der Meer's work: a sharp eye for posture, compassion and bone-dry humour. In addition to shots from Minor Mysteries, Galerie Wouter van Leeuwen also shows a number of highlights from Hollandse Velden. 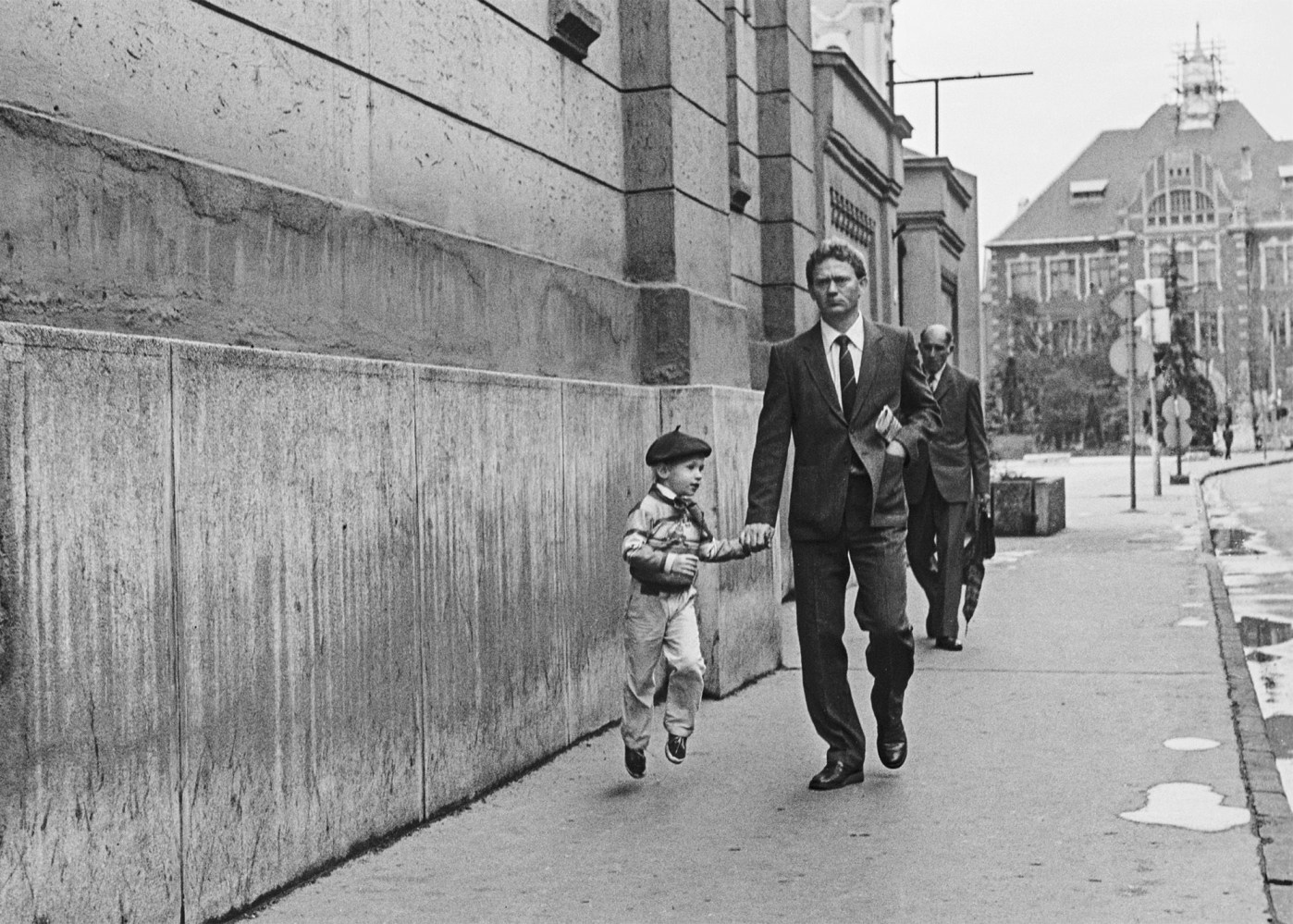 A gift for the photographer
Van der Meer calls them a gift for the photographer: those photos that during development turn out to have that one detail that makes them an instant success. The boy who jumps up on his father's hand is one such gift. The little fellow seems to float with happiness as his father strides stoically. The feet hovering above the pavement for just a fraction of a second make the scene.

People say you can force luck in football and the same probably also applies to photography. From a technical point of view, Minor Mysteries tells the story of a photographer in search of his own style, who seems to achieve this by shooting endlessly. Van der Meer took the picture of the boy in the autumn of 1984 in the industrial Hungarian town of Miskolc. In May 1984, as part of a cultural exchange programme between the Netherlands and Hungary, still behind the iron curtain at the time, he was a guest of the Hungarian Ministry of Culture for two weeks in preparation for a longer stay. In September 1984, he rented a flat and started photographing the streets daily, mainly in Budapest.

At the time, Van der Meer was mainly interested in using body posture to narrate a scene. This is something he began working on during the first year of his studies in Leiden: a police officer writing out a ticket, someone stooping and locking his bicycle while gazing outwards and three men equidistant from each other walking in the snow, all in a slightly different position, thereby creating a rhythm in the image. Each of these scenes is immediately recognisable due to the posture. The photo of the boy and his father in Miskolc is also such a scene. 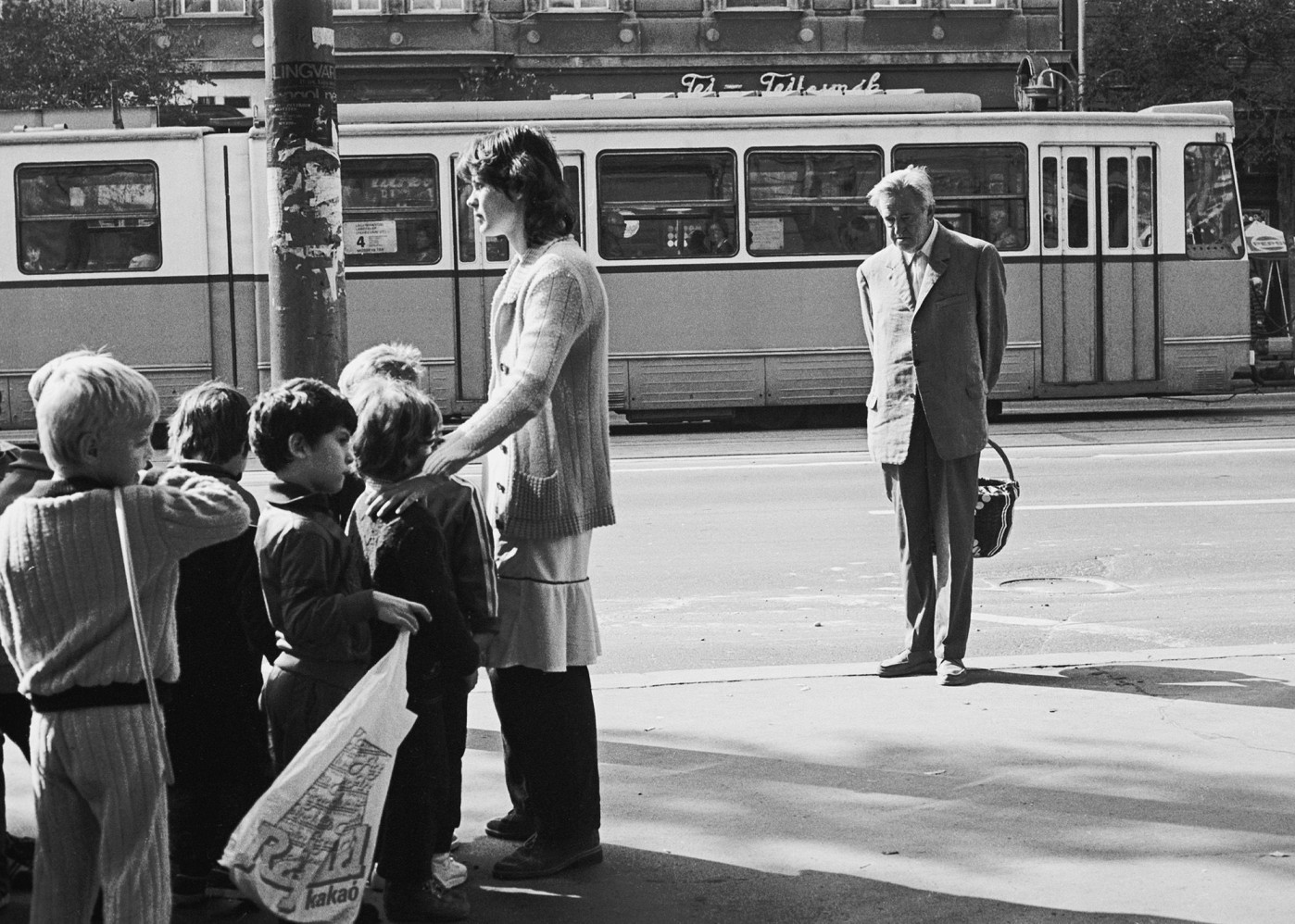 From Warmond to Budapest
Van der Meer first visited Hungary in 1982 on a short holiday. The photos he took there never left him. “I was living the life of Riley as a property guardian with my then girlfriend at the Hagheweide estate in Warmond. Yet I felt that I had to get out of that life and follow my dream. I started studied Visual Communication at the Rijksakademie in order to 'deepen my visual language', as they say.”

From September 1984, Van der Meer visited Hungary regularly and spent most of 1985 there. Van der Meer's visits took place not long after the large anti-nuclear demonstrations in the Netherlands: first in Amsterdam in 1981 and in 1983, following the second mass protest in The Hague. Cruise missiles were to protect the West against our ‘enemies’ behind the iron curtain, but many people in Western Europe were curious about daily life on the other side and visited Eastern Europe with a visa.

Van der Meer was inspired to focus on the human condition and everyday scenes by such photographers as Andre Kertesz, Robert Doisneau and Henri Cartier-Bresson, especially his ground-breaking publication People of Russia (Time Life, 1955), in which the Frenchman, at the height of the Cold War, depicted the life of ordinary Soviet citizens. Stylistically, Van der Meer was also influenced by what is called 'visual comedy', such as the silent films of Buster Keaton and work of Jacques Tati. 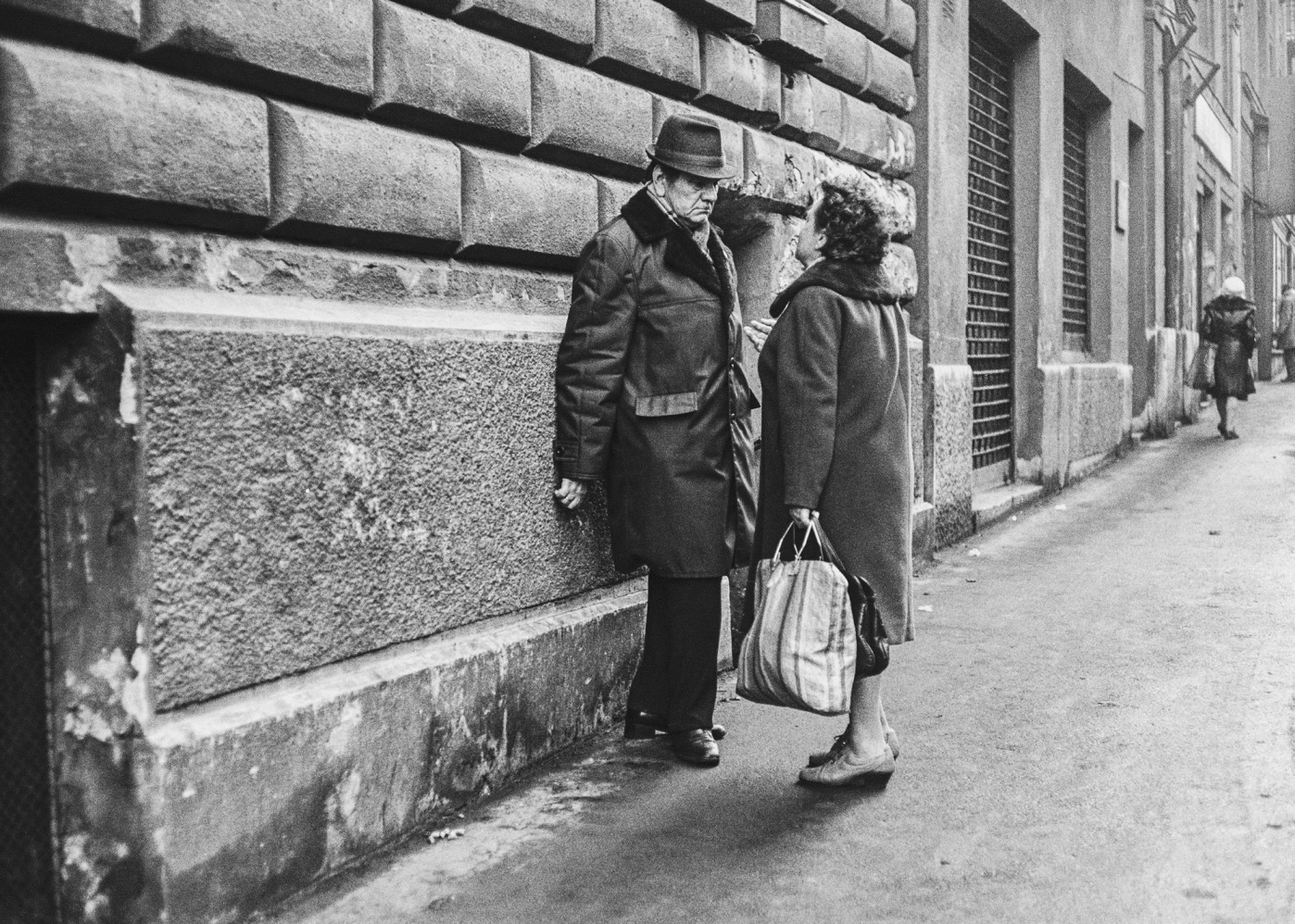 The aimlessness of life
During his Hungarian period, Van der Meer trained his eye for postures and poses, something that would benefit him more than ten years later in Hollandse Velden (1998). What is striking about Minor Mysteries when you look at the photos is that they were all taken from about five to ten metres away. Van der Meer preferred to use streets that were not too busy in order to isolate scenes. When he spotted a promising situation from a distance, he tried to approach that scene as carefully as possible, hoping that the moment wouldn't be over by the time he got to the right distance.

During that time, Van der Meer also discovered what he believes is the essence of photography: to ask questions. “We see a lot, but know little about the story behind an image. Photography is a form of disconnection: by separating it from its meaning, the image becomes isolated. When you see a simple act by someone, but still don't understand what they are doing, it raises questions. It is that incomprehensibleness that also lurks within the mystery of photography itself, that sometimes just raises the question of the meaning of existence. I’m also always reminded about the catechism question we learned in Catholic primary school: Why are we on earth? We had to repeat the answer with the whole class. Yet no one knows.” 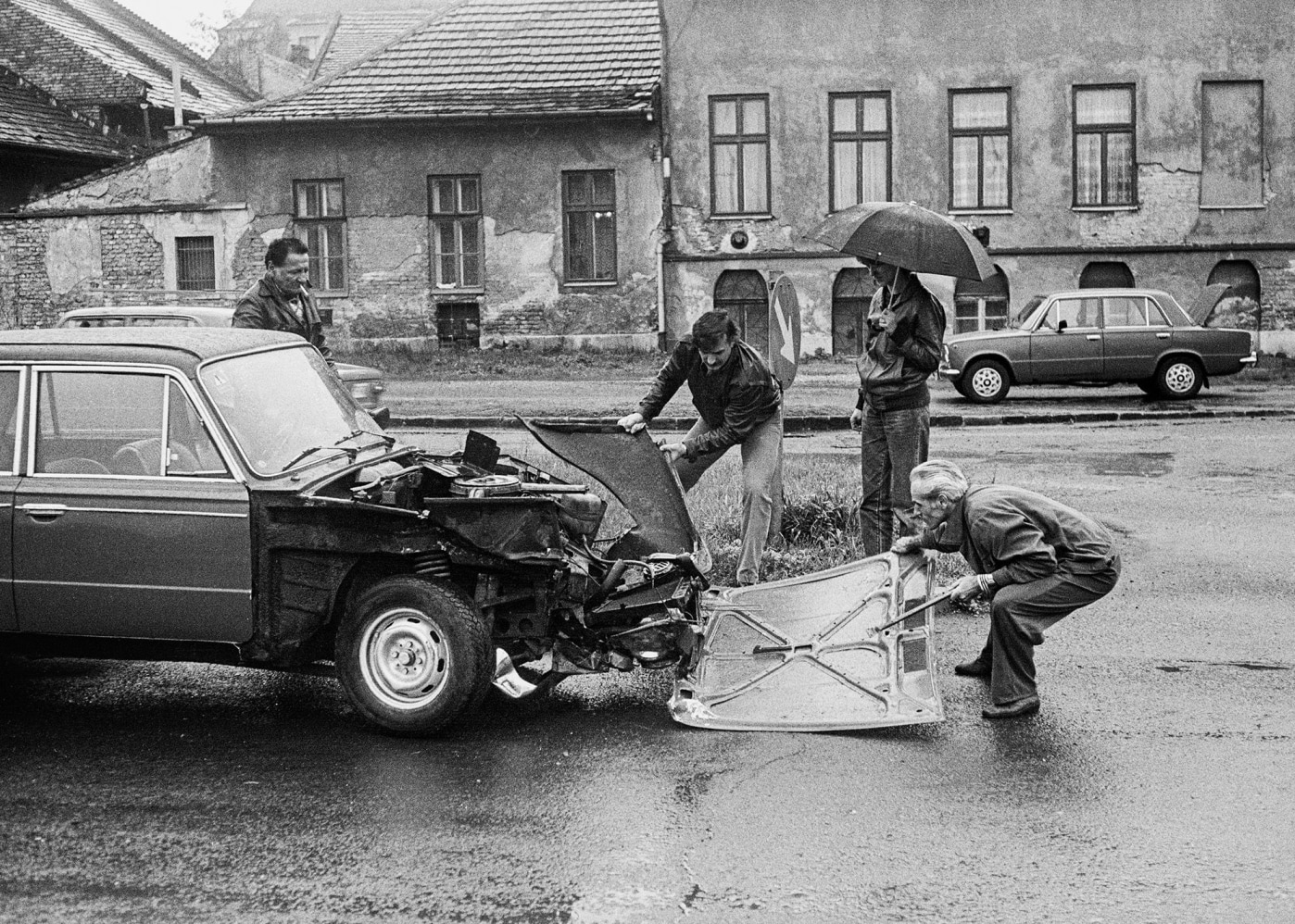 The vast majority of pictures in Minor Mysteries will bring a smile to your face, precisely due to the aimlessness in the scenes, such as four men inspecting a badly battered car – the car is a total loss – or the man cornered by his/a woman on the street. They are almost touching each other, pushing him against a wall, and his posture speaks volumes: the man would rather crawl under a rock. Yet that doesn't tell the whole story of Minor Mysteries. There are also a number of shots in which elderly people are busy collecting and dragging old cardboard on the street. “A symptom of a failing system. They have been abandoned by the government.” Van der Meer also sometimes found drunk people lying on the street. Those shots did not make it into the book because they were too direct for Van der Meer. 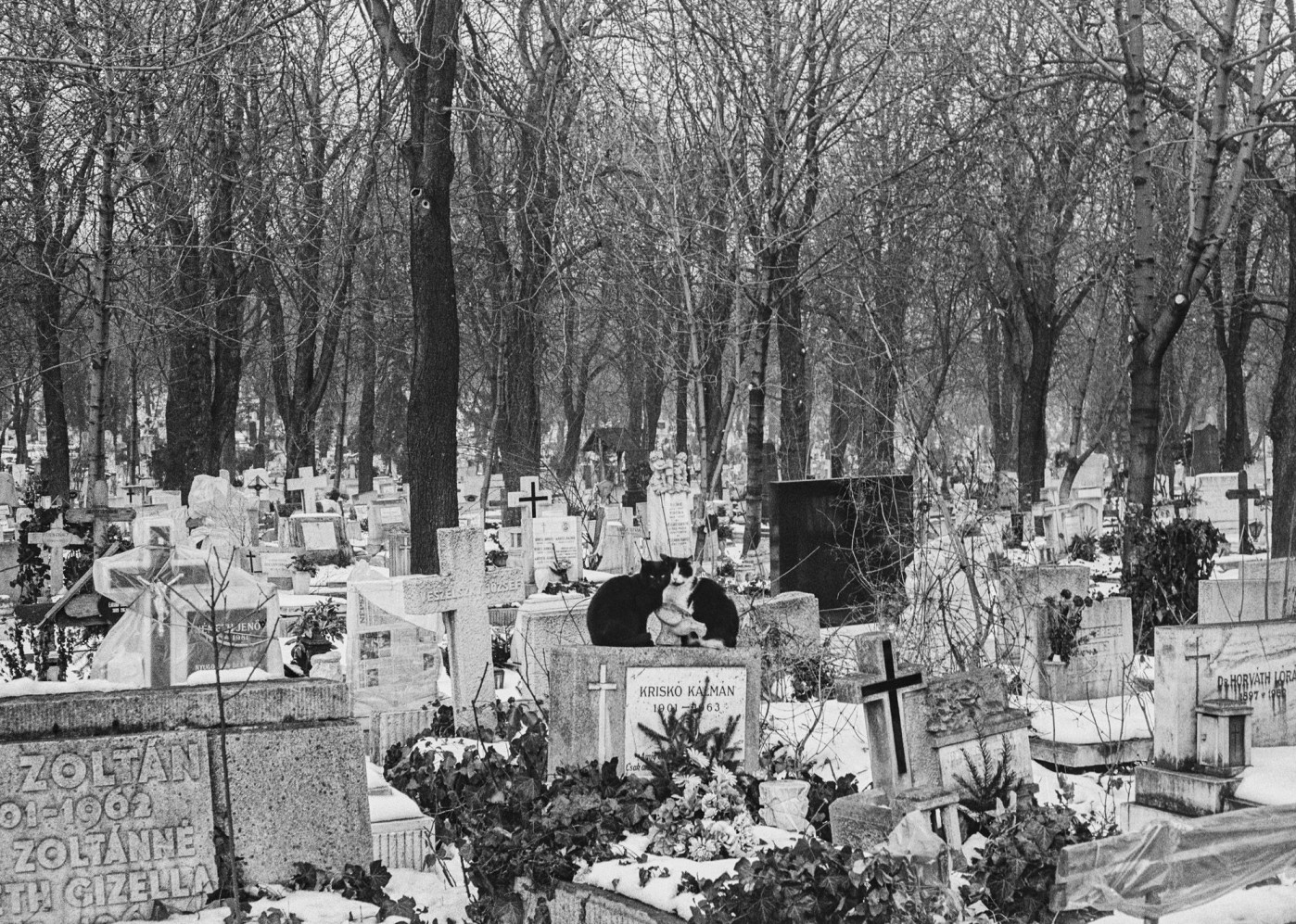 A friend of Van der Meer casually pointed out to him his greatest discovery at that time. “When I was back in the Netherlands, I printed my photos in the darkroom. A friend of mine, who had studied architecture and philosophy, closely examined my pictures and said, 'Something is broken in every photo'. These things were not my subject, but were visible next to and behind the people I photographed. The power of descriptive photography often lies in the details that have been photographed by chance, such as in pictures from the past with you in them. It's only in the background that you can really see how the world has changed. This raises the question of what the subject of a photo is; perhaps the subject lurks in the background. That idea would gain a more prominent place in Hollandse Velden, the series about amateur football. Besides football, the surroundings became just as important. “I would never use a farmhouse as a subject, but it is nice if it appears in one of my photos by chance, because that is how we experience the world. The environment we are so familiar with is the background of our lives, which I also like to incorporate into the background of photos.” 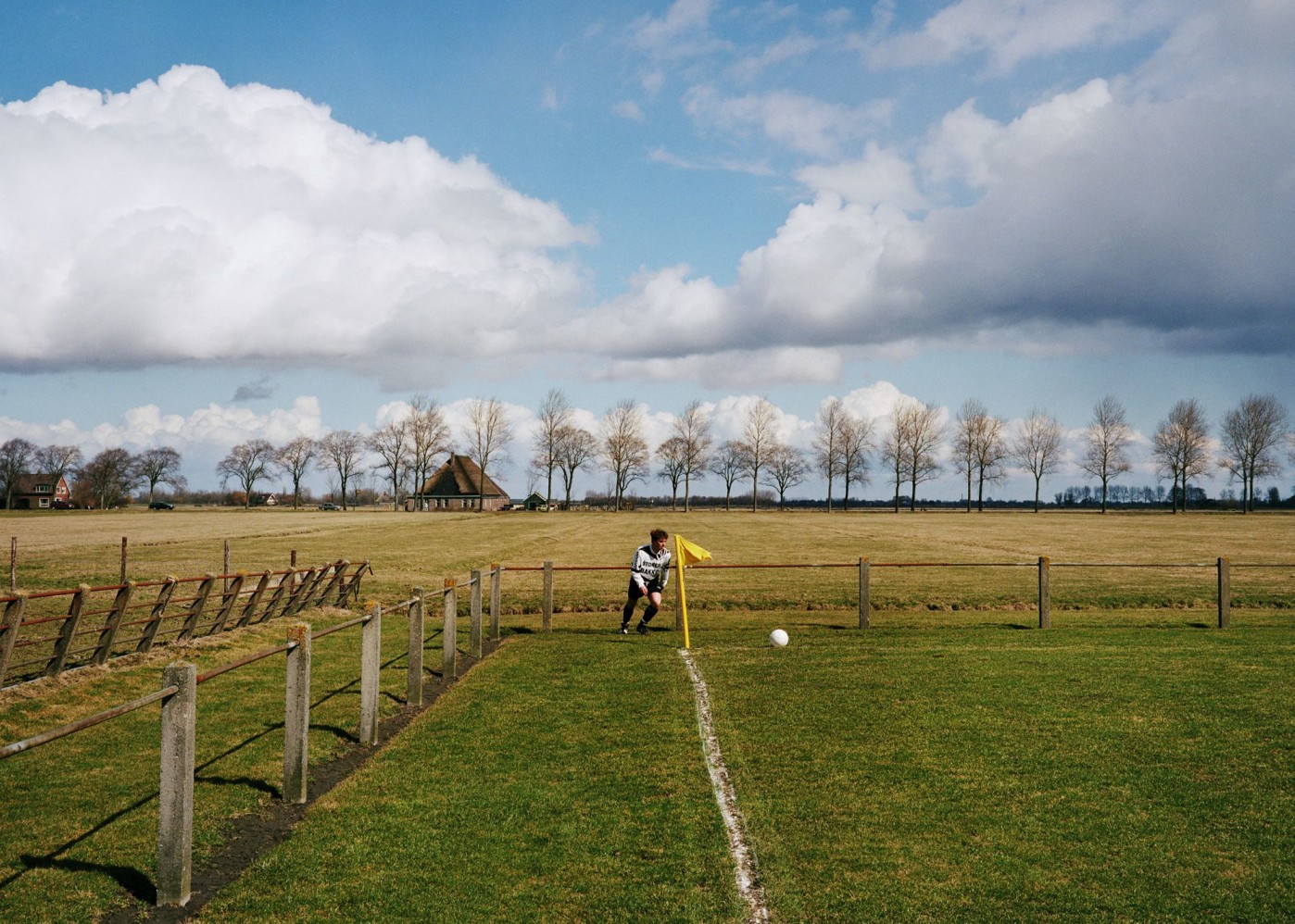