The dark undertone of the idyll | Guy Vording's elusive collages 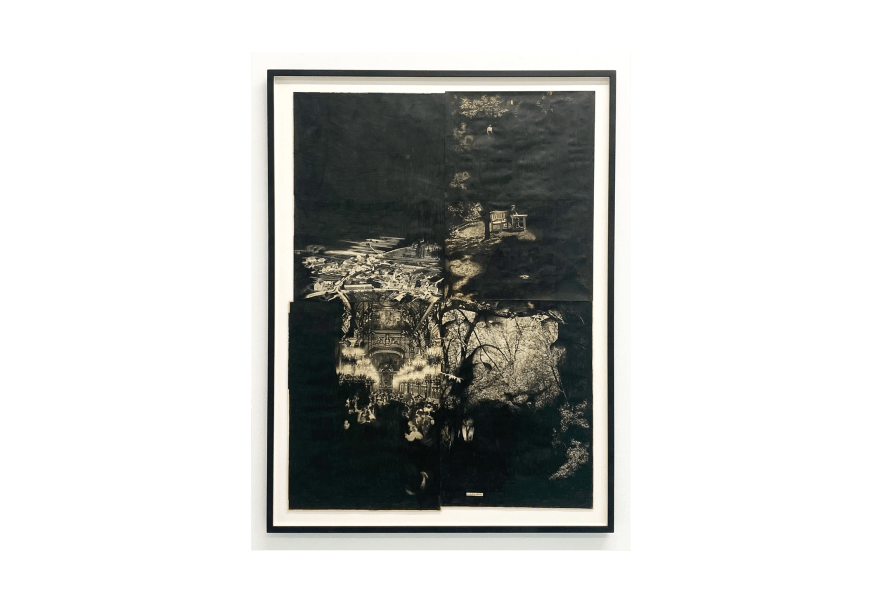 How to tell a story? In most cases by saying something more and adding things. But vice versa is also possible. Artist Guy Vording hides most of the post-war magazine pages behind meticulously applied layers of black graphite. “Do not add anything, just take things away, so that a new story arises with what remains.”

“One of the questions I never answer is what else was on the pages”, says Guy Vording (NL, 1985), “but if you see one person in a work of mine, it usually means that there were many more people in the photo. I erased those. A theme that returns in much of my work is loneliness.” That loneliness and tension can often be lifted from the paper. Vording mainly uses issues of the American weekly Life magazine from the late 1940s and early 1950s. One reason for this is that the magazines were still printed in black and white at the time, which enabled him to smooth out parts of the photo and text with black watercolour pencils. This is not possible with colour printing, which became common in the mid-1950s, because a glossier type of paper is used.

Since Vording sticks to black pencils, he can incorporate parts of the black-and-white photo into the whole, causing the viewer to doubt where Vording’s drawing ends and the photo begins. That gives his works something elusive. This effect is further enhanced by the loneliness of the characters and the textual and visual references to their inner world. 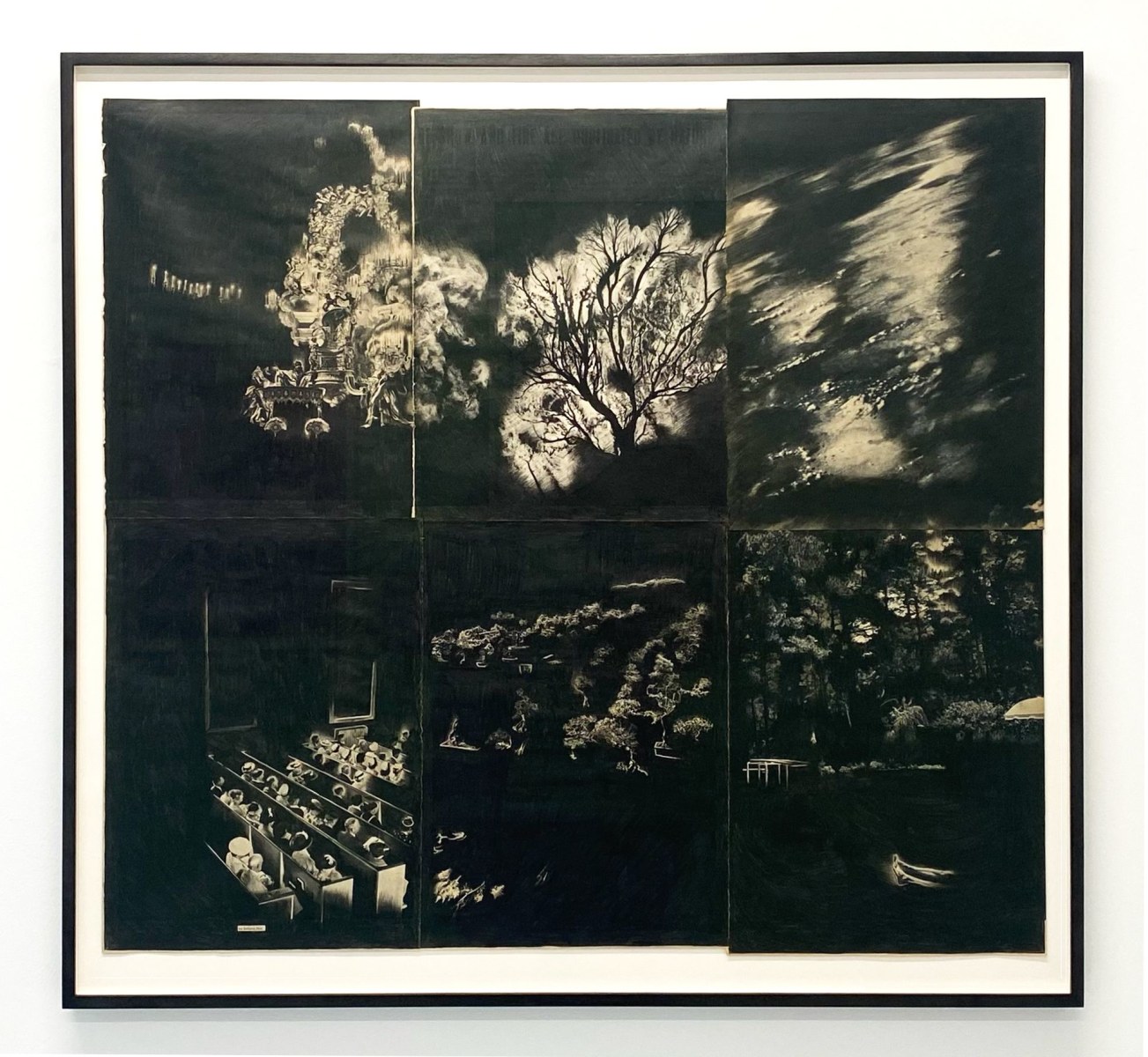 Beneath the surface
Thematically, the choice of material from post-war America is also in line with Vording's work. “The topics covered by magazines at that time are quite banal. It's about apple pies, green lanes, how to be a good housewife, what suit should the man wear when he goes to work?” The life of the perfect housewife, like Betty Draper in the television series Mad Men, but in black and white. 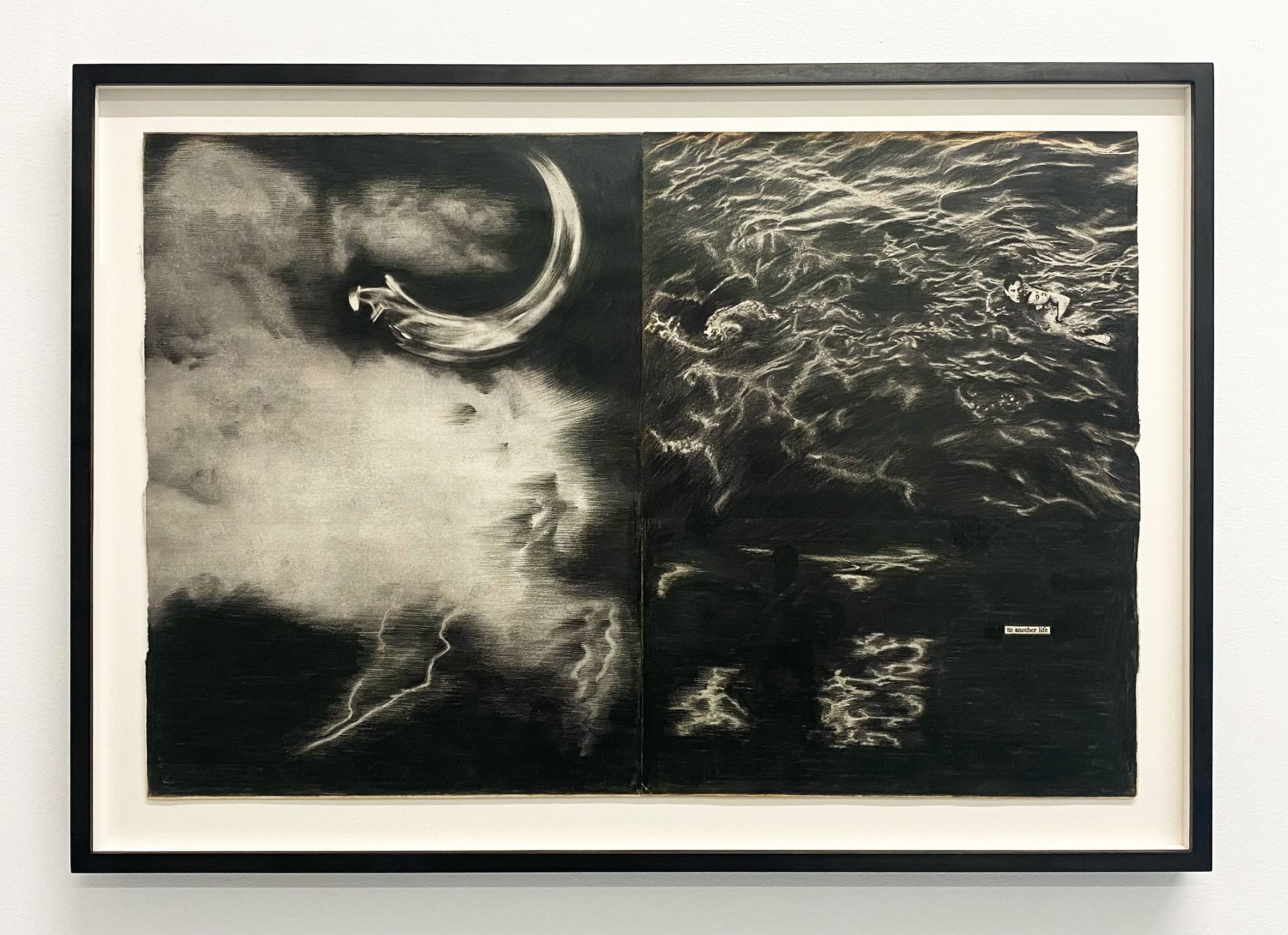 Like Draper, who keeps up appearances to the outside world, but is heavily burdened by life as a housewife, the articles in Life are in stark contrast to social reality. Vording: “Back then, people had just through a time that was tough worldwide. Certainly, also in America, because so many people from Europe came to America with trauma, but nothing is mentioned in the magazines. Nothing."

The magazines present an idyllic life, which, according to Vording, is a typical example of the American Dream. A phenomenon that has fascinated him from an early age. “As a child you watch American movies and think I want to live there, that's where I want to go, which is what I did when I was 20 and spent two years in New York. When I was living there, I thought I see all this, but there is a different story behind it. And I always had that with that time period of the 1950s: you see this, but there is something completely different beneath it.” 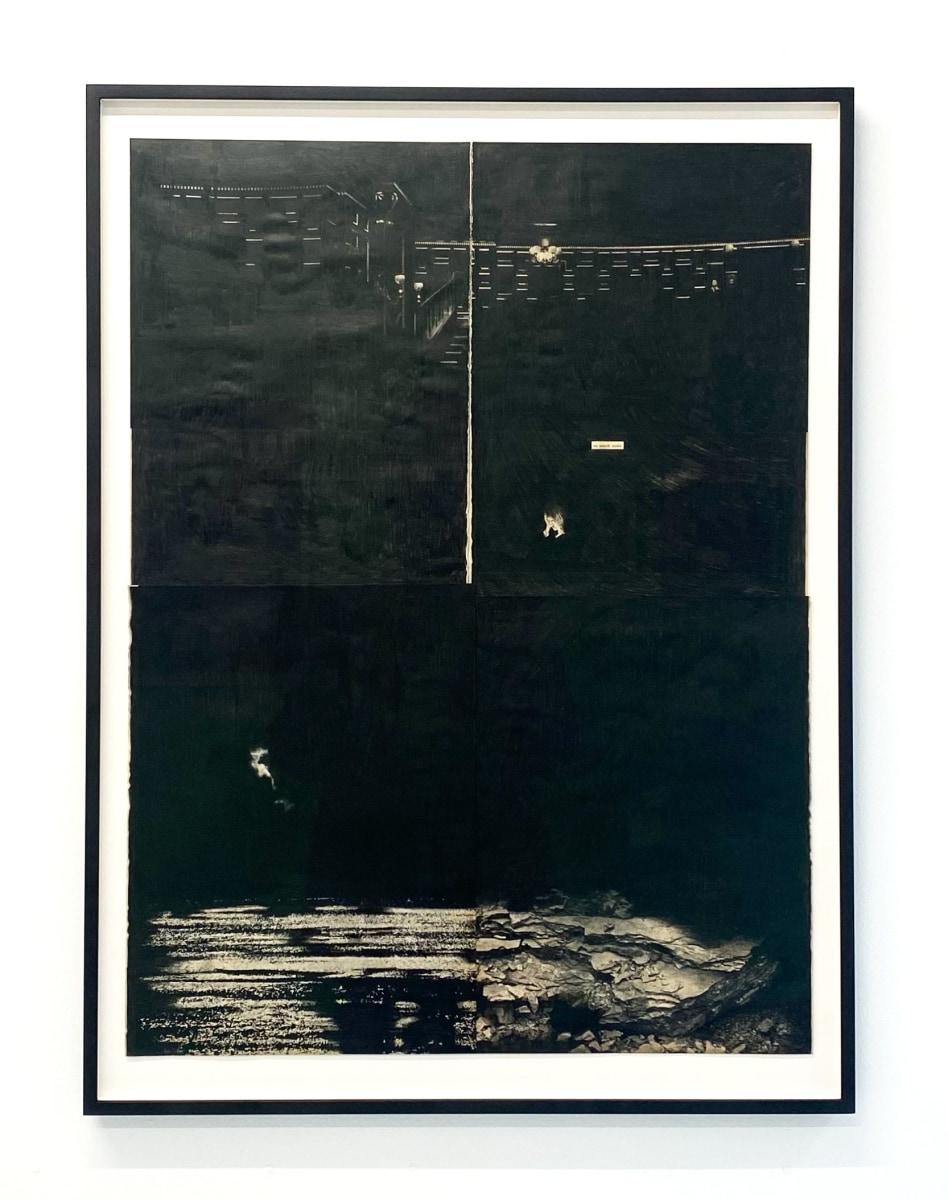 The tension between what you perceive, and the undertow is reflected in all Vording's works. The contrast between inner and outer worlds is best expressed in the collages that are made up of several sheets. In it Vording shows what he calls a 'double world'. He contrasts the earthly with the heavenly, and the internal with the external, as in So much noise in which the facial expressions tell exactly how the main character feels. 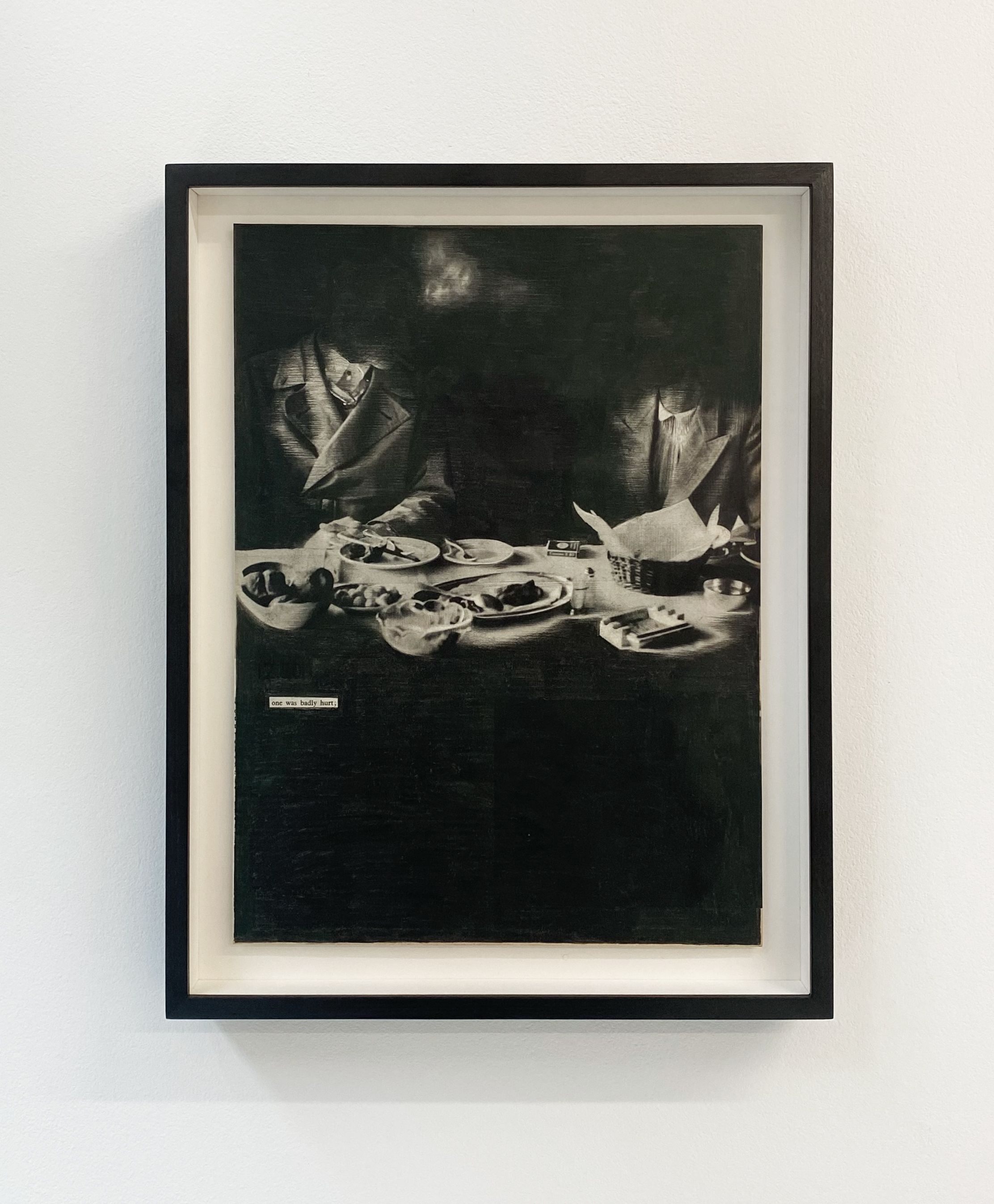 A lump of gold
Vording started collecting old magazines when he lived in New York, frequenting thrift stores and garage sales and collected hundreds of magazines and postcards. Nowadays, he buys most of the material in the Netherlands. Like two years ago when he was able to buy a few complete vintage series in perfect condition near his parental home.

“It's like finding a lump of gold, especially when you think about the projects you can realize with it. The paper must be in good condition, because I want my works to last a long time. I do not accept water damage or rust spots from staples.”

One was badly hurt
Once Vording has decided which pages he wants to use, it will take him about a day to map out which image elements and texts he wants to keep. “It's a fragile material, so I can't just start sketching. Also, I only have one chance, so it must be right the first time. I frame 4 or 5 text fragments beforehand and by editing the image it becomes clear which text remains. At times I can be a little intuitive, but most of the time I am alert.” 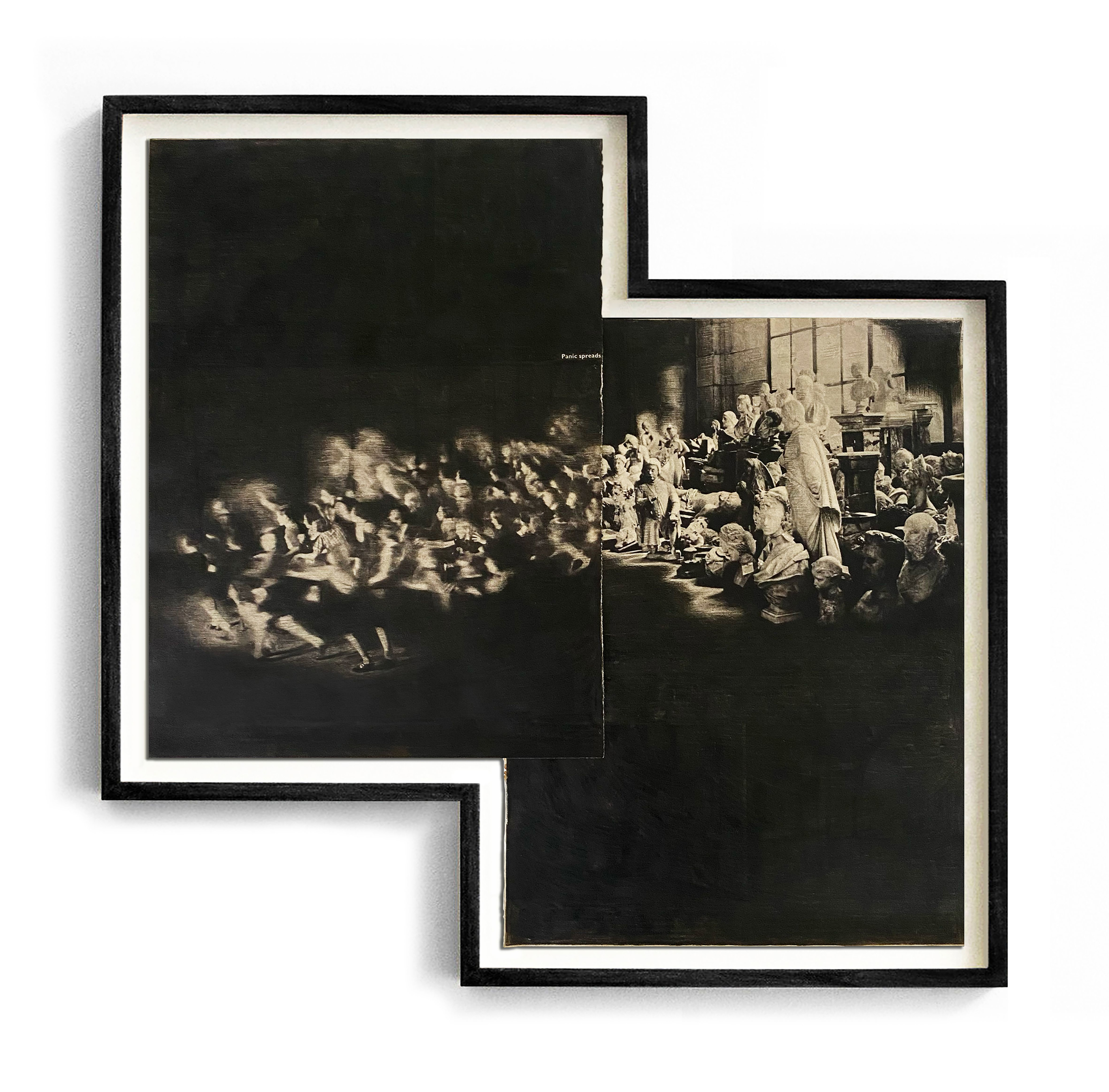 The few words that eventually escape Vording's pencils must go together with the image. They should disrupt or reinforce the image. That first happens in the work Black Pages III: One was badly hurt, in which two headless figures sit at a breakfast table. Vording: “I once said: only making heavy work is not the challenge. I don't go to my studio for that. Such a text can also breath air into a scene, but that is a challenge to select the right words.”

Duo exhibition
In addition to Vording's work, there are also drawings by the Belgian artist Stefan Serneels. Serneels' gallery Whitehouse showed his at Art Rotterdam in the stand next to that of Dudokdegroot, who showed Vording's work. Afterwards, Serneels emailed Vording asking whether he was open to swap works. And so it happened.

Serneels has a completely different style than Vording. No fragile old magazines here, but thick paper from solid sketchbooks. No controlled layers of black that consider that brittle paper, but stripes that are sometimes coarse, then loosely applied, but at the same time completely on the mark. Yet, Vording sees an important similarity in their work: “There is something surreal about both of our work. With my work it is in the medium: where does the photo end and where does the drawing begin. With Stefen it is in the scene, the perspective and the erased faces.“

The duo exhibition Fear isn't so difficult to understand with work by Guy Vording and Stefen Serneels can be seen until 26 November at gallery Dudokdegroot, Amsterdam.
In this article