The abstract tales of Moataz Alqaissy 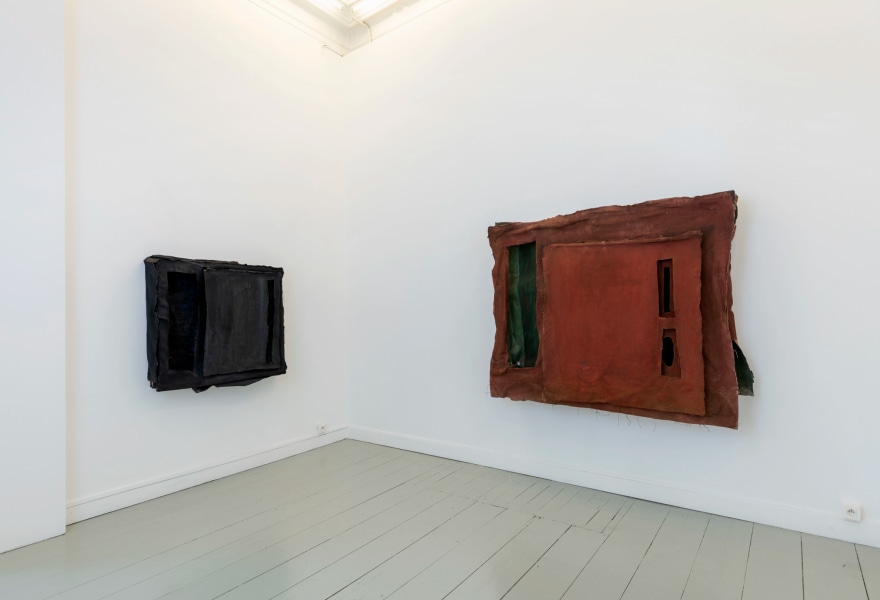 Moataz Alqaissy, I eat your thoughts when you have the blues, 2022, Geukens & De Vil

The hero of my story is the canvas and the way I shape it is my vocabulary. That is how I communicate with the world.

If there is one artistic school that the young Antwerp-based artist Moataz Alqaissy (1986, Baghdad) would like to be a part of, it would be the non-existent ‘Sam Gilliam School’. More than any other painter, Alqaissy feels an affinity with the work of the late artist Sam Gilliam (1933, Tupelo, Mississippi - 2022, Washington DC). Initially, Gilliam was part of the Washington Color School, which included abstract expressionists such as Kenneth Noland and Morris Louis (also the founders) between 1950 and 1970. In 2018, the Kunstmuseum Basel devoted the impressive exhibition ‘The Music of Color’ to Gilliam’s work and this first solo exhibition in a European museum marked his major breakthrough.

By the mid-sixties, Gilliam broke with the Washington Color School when he decided to remove the canvases from their wooden frames and hang them freely in the room. With this radical gesture, he wanted to give the painted canvases the opportunity to manifest themselves as free forms in space. Paintings should express human emotions, not only on the basis of colour, material and composition, but also by making use of space and form, thus evolving into a new spatial experience. As with Anish Kapoor, Alqaissy considers colour an ‘enabler’, a means to convey a certain feeling, to evoke a certain memory. 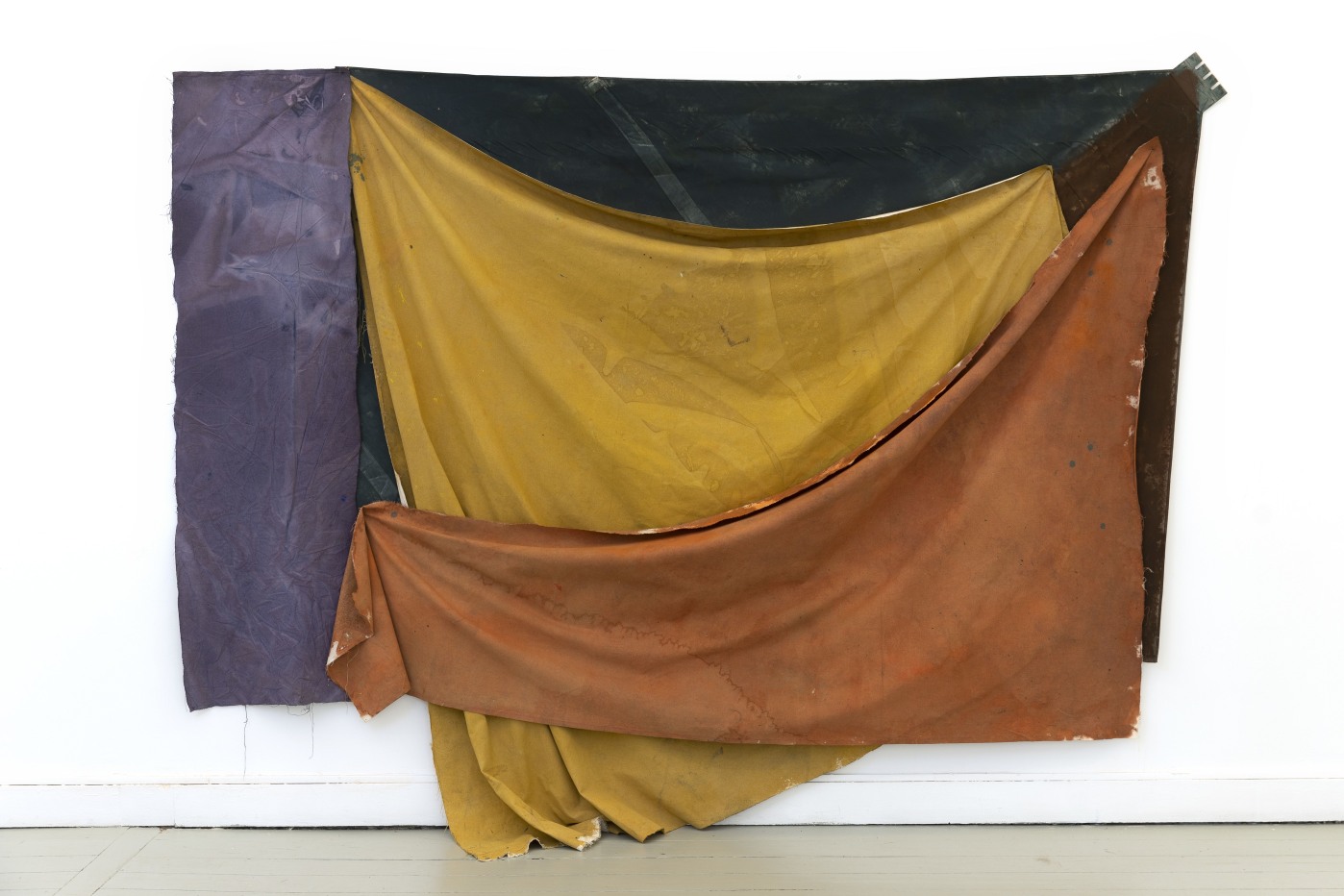 After Sam Gilliam and before Moataz Alqaissy, intergenerational artists like Steven Parrino (1958-2005), Niele Toroni (1937), Katharina Grosse (1961) and Megan Rooney (1985) convincingly demonstrated the forms a ‘shaped canvas’ can take on if paint is liberated from the limited scope of the traditional canvas. Although Moataz Alqaissy's work fits in with this tradition, the uniqueness of his work lies in the fact that the emphasis shifts from a formal step (related to the form of the material) to the content. No one before him had ever told a story on a ‘loose’ canvas, and certainly not about facts and phenomena only known through tradition and memory.

Characteristic of the paintings of Moataz Alqaissy is that they relate to the canon of classical painting while at the same time disregarding it. Like his predecessors, he strives for greater interaction between painter, spectator and painting by literally giving the canvas a place in the space. Alqaissy explains, “A painting does not have to be limited to the boundaries of the two-dimensional plane to belong to the domain of painting. By stretching the boundaries of painting, I am attempting to create space for a combination of Western and non-Western, historical and personal visions of painting, with the canvas itself as the main element of a painting.” As a primary component, the canvas should be pliable and malleable and as such, emphasise the artistic process rather than the result. 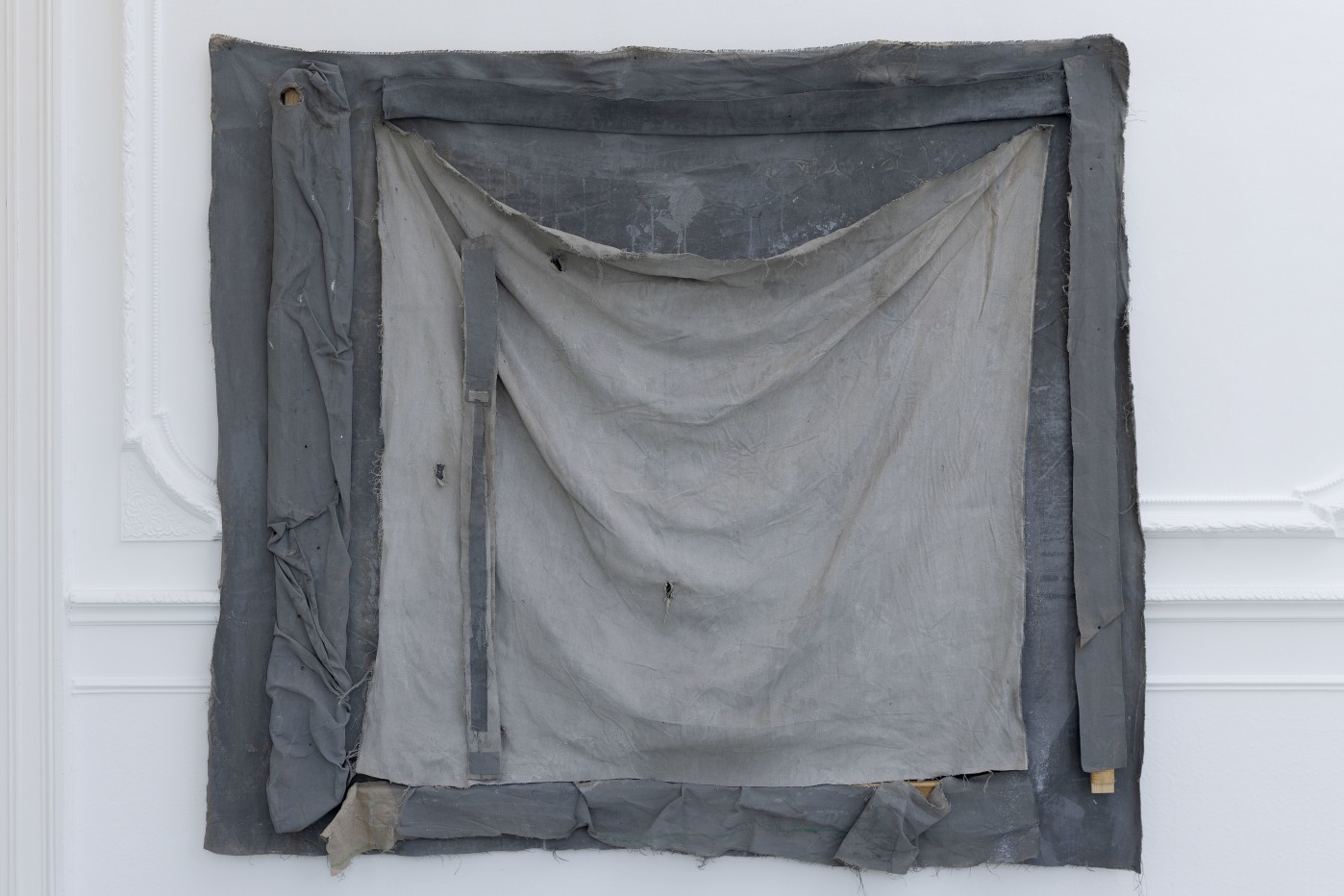 Every nail in a painting is important. Not just the paint, canvas or stretcher bars.
Anything can be part of the creative process.
That is why all parts are equally important.

Paintings come in a compositional way and in a conditional way.
Composition comes with colors whereas
Feelings and emotions are linked to
circumstances like a certain light

Born and raised in Iraq and currently living in Antwerp, Alqaissy must balance between two cultures. This results in resources and freedoms, but also limitations. By focusing on the tangibility and shape of the canvas, he seems to be attempting to create the illusion of a real, tangible story in which colour is a supporting component. His monochrome canvases are characterised by ‘washed out’ or faded colours that testify to a literally ‘grey’ past that may not have existed, or only in tradition and memory. At any rate, they have lost their lustre. 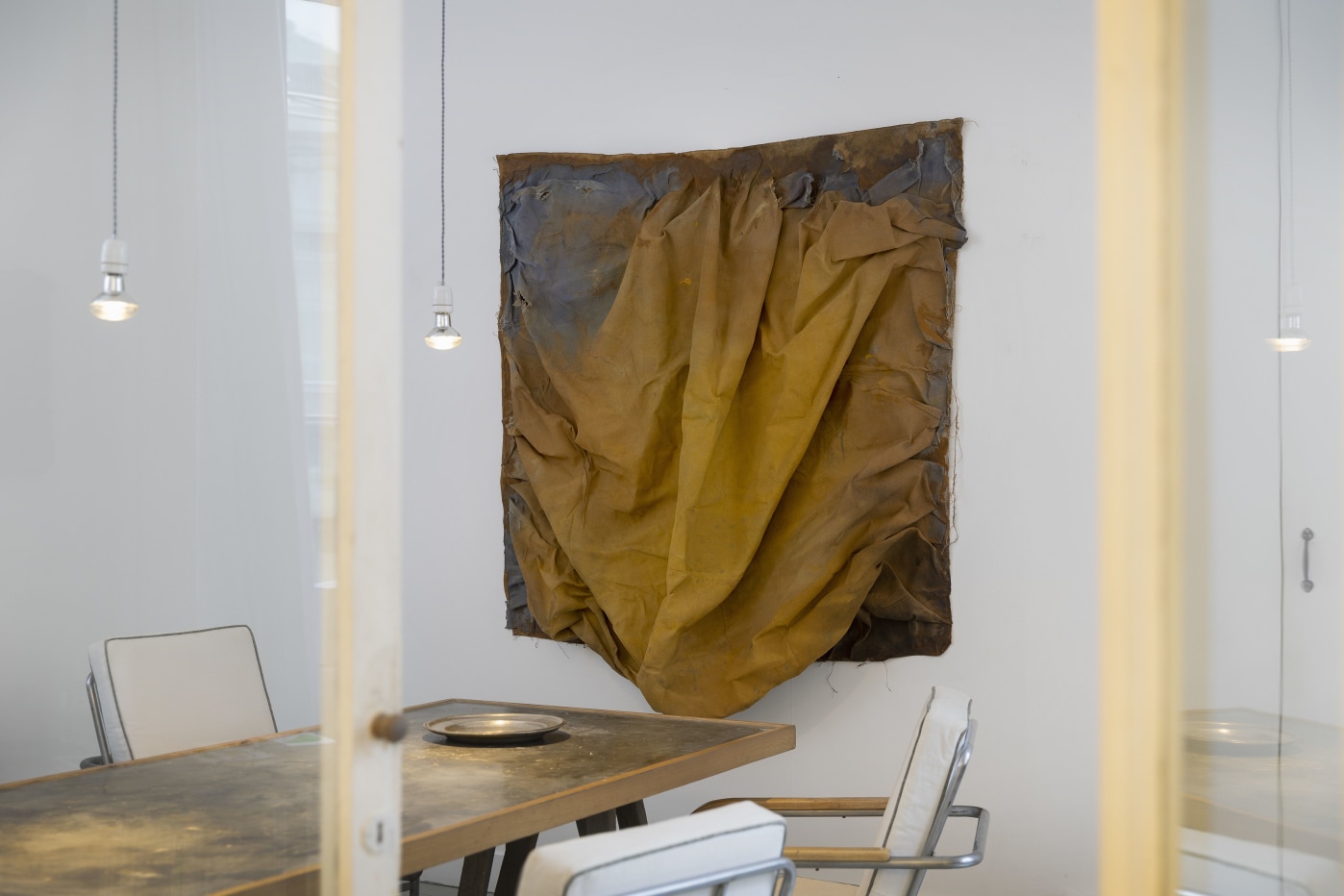 Alqaissy explains, “A city like Baghdad was once a beacon of civilisation and history, but what remains is an excavated city that tells a story about a rich past. Was Baghdad really a flourishing city during the heyday of Islam? The city has since been mummified. It is an ‘undead’ city: it exists but it is not alive. It has no future. My canvases are physical memories of stories that testify to vague apparitions from the past, such as the story of the Tower of Babel or the folktales from One Thousand and One Nights. Like these stories, a city like Baghdad, which has suffered countless wars, has been shaped by us. It is an extension of us, as my paintings are an extension of me. The battleground has only shifted from where we live to where we think. But both places are continuously evolving, as are my canvases. And that is why they have an indeterminate shape and my ‘stories’ have an open ending. After all, nothing is unchangeable. The shape and colour change depending on the location, context or light – and with that the experience and meaning. When you walk past it, the canvas moves along with you. It folds and unfolds. And always tells a different story. Just like in lore, you never know what the true story is, which is what makes this process so fascinating.”

The exhibition Just a Little Pinprick by Moataz Alqaissy is currently on view at Geukens & De Vil gallery, Leopoldplaats 12 (1st floor) in Antwerp, and will run until Saturday 1 October.

The gallery is pleased to invite you to a drinks on Saturday 24 September between 13:00 and 17:00 hrs in the presence of the artist.