Lidwien van de Ven: “My photographs are like intersections of historical lines and current events.” 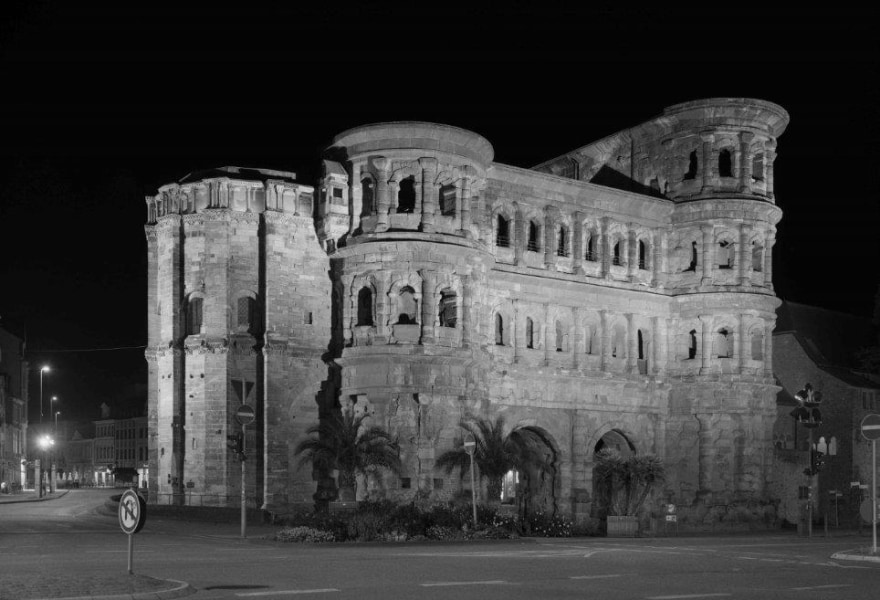 “My photographs are like intersections of historical lines and current events.” At Unseen, Galerie andriesse-eyck is presenting new and several older works by Lidwien van de Ven (NL, 1963) in which she examines our dealings with the past based on formal and informal monuments. Statues, squares, places and graffiti that you have passed by for years without noticing suddenly become the focal point of current events, while others languish.

Parallel to the presentation at Unseen, Andriesse-Eyck is showing the solo exhibition Echoes and Traces in their gallery, featuring new work by Van de Ven in which her camera mainly focuses on statues and reliefs: formal monuments that suddenly become meaningful again due to current developments.

Van de Ven’s work initially looks like photojournalism, but on closer inspection, it is anything but, because the event has already taken place. Van de Ven lives and works in Rotterdam and Berlin and took part in documenta 12 (2007) and has exhibited at the Museo Reina Sofia, Stedelijk Museum Amsterdam (2014) and Van Abbe Museum (2015).

Much of Van de Ven's work revolves around the limited number of images and information that make up our collective memory of complex historical events. For example, she worked in Palestine and even if you don't see any violence in her photographs, you automatically think about the lingering conflict and her deviant images make you aware of the limited narrative that media offers.

The contrast with the dynamic images presented to us by the media is enhanced by Van de Vens' black-and-white photographs, taken when most people have already left the scene, creating an atmosphere of silent reflection. Due to the darkness and almost tangible silence of the night, you perceive the monuments in a different way. At first glance, the works appear to be nothing more than photographs of monuments. But if you take your time, more and more details start to emerge and pieces of the puzzle slowly fall into place. Van de Ven describes her photos as “intersections of historical lines with current events”. 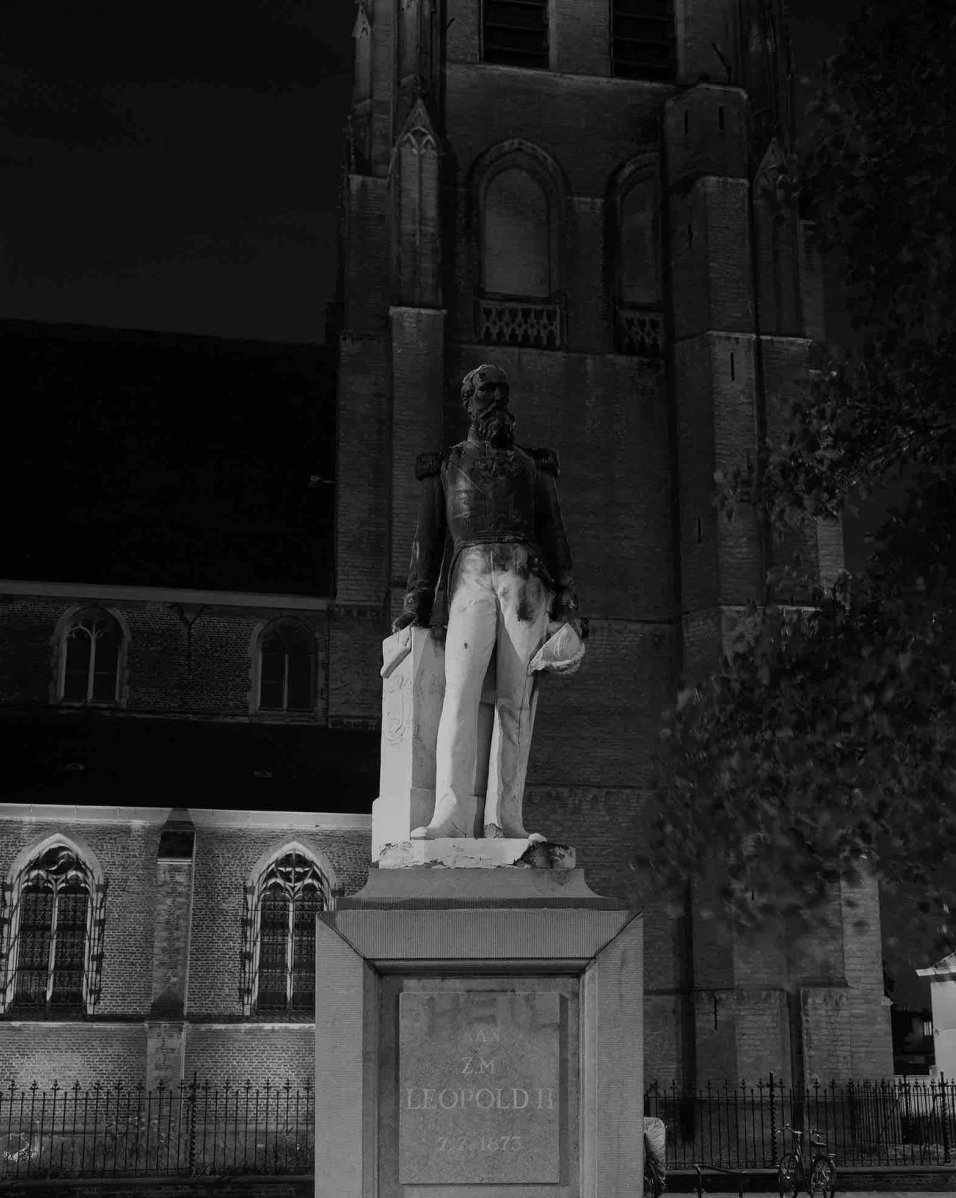 This interaction between past and present is clearly reflected in Ekeren, 05/06/2020 (Leopold). The full-scale photo shows the partially charred statue of King Leopold II in front of the St. Lambertus Church in Ekeren, Antwerp. Shortly before that, red paint had been hurled at the statue in protest against the brutal Belgian colonial regime in Congo, which was particularly violent under Leopold II. In 2020, in the wake of George Floyd's murder in the U.S., protests flared up again and the statue was set on fire, damaging it so badly that local authorities decided to remove it.

Van de Ven recorded the exact opposite in Paris on the Place de la Republique after the attack on the Bataclan music venue in 2015. The monument to Marianne, the personification of the French Republic, is so large that only the pedestal and her legs are visible in the photo. The republican values ​​of liberty, equality and fraternity can be read on the pedestal, values ​​that were seriously violated by these attacks. People are gathered in the foreground laying down flowers.

Something tells you as a viewer that they have been here before, because if you look more closely, you can still see Je suis, the first words of the phrase Je suis Charlie, the declaration of solidarity with the victims of the deadly attack on the editors of the satirical magazine Charlie Hebdo in January of that same year. In the aftermath, people around the globe jumped into the breach for free speech. The loving expressions of support for the victims of the Marianne attacks are also indirect expressions of support for the French Republic and the values for which ​​it stands.

Scratched and wiped out

Van de Ven also shows what happens when monuments are not touched by the present in a series created about the Marx-Engels-Forum. The monument was erected in East Berlin in 1986 to commemorate the 100th anniversary of the workers' movement and in addition to large statues of Karl Marx and Friedrich Engels, it also consists of eight steel columns with historical photos on them. Van de Ven photographed the images up close. What is striking is that some photos have been so dirtied and scratched by passers-by that the scenes are barely visible, something that is caused by daylight in other photos, leaving a kind of white fog.

The history of the workers' movement and socialism seems to have been forgotten, even if they made a concrete contribution to better living circumstances for many. Perhaps it has to do with the fact that the country in which the monument was once erected no longer exists, a country in which socialism was the dominant doctrine. Illustrative of the careless handling of this history is the sad fate that befell the monument since the Berlin Wall came down. Since then, it has been towed and erected in numerous places around the city. 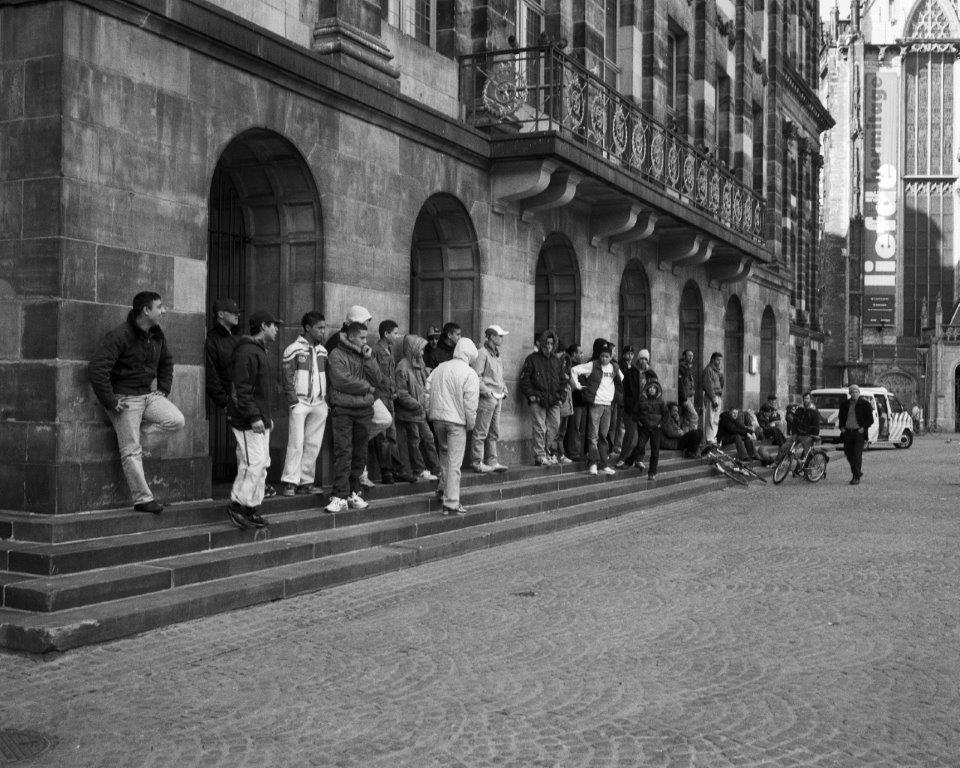 The presentation at Unseen focuses on smaller works and informal monuments, places where people gather to remember a current event in which the media offers a one-sided portrayal, such as in Amsterdam, 27/03/2004, 2007. A few days after the death of Sheik Ahmed Yassin, founder and leader of Hamas, by an Israeli missile attack, the Dutch Palestine Committee and international socialists organised a memorial meeting on Dam Square. Some of the demonstrators wanted to burn an Israeli flag in protest, but this was prevented by the organisation due to possible one-sided media coverage. The organisation feared that the flag burning would get all the attention and overshadow the message of the demonstrators.

Van de Ven also exposes the limited attention and logic of the media in the serene portrait of the Dresden court house in Dresden, 26/09/2009 (Marwa el-Sherbini), 2022. On 1 July 2009, Marwa el- Sherbini was stabbed 18 times and killed by her neighbour at the court in Dresden. The Egyptian el-Sherbini had filed a lawsuit against her neighbour Alex W. in November 2008 for public insult and threats, after he called her a 'terrorist' and 'Islamic whore’ in a playground because of her headscarf. Alex W. was found guilty but appealed, bringing the two face to face again on the fateful day. 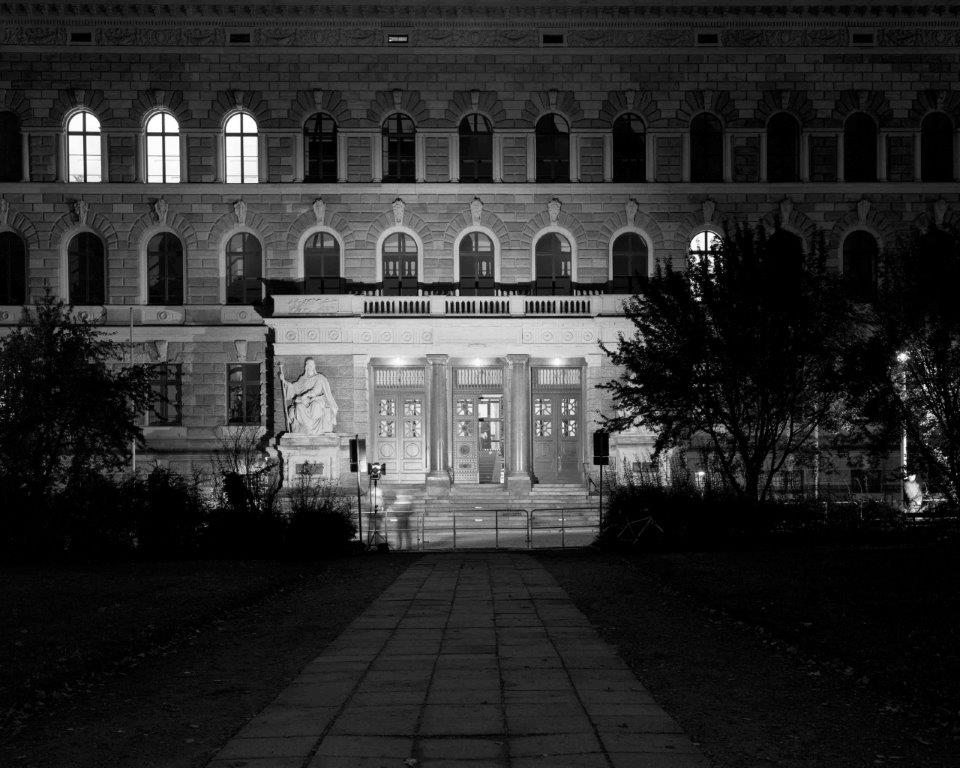 Unlike Egypt, where Marwa el-Sherbini was soon proclaimed a ‘headscarf martyr’, the brutal murder initially received little attention in the German and European press. Only after the British newspaper The Guardian reported about it did the German media pick up on the story. Van de Ven made the portrait of the court on the day of the trial against Alex W., when the media and press gathered in front of the court steps, awaiting news about the lawsuit.

The informal character of monuments can be seen in Trier, 14/09/2020 (Porta Nigra), 2022. The Black Gate, which was erected by the Romans in the second century AD as the northern gateway to the Roman Empire, was conceived as a functional building and not a monument. Yet it became just that, a building that has been rebuilt several times over the centuries and has witnessed the rise and fall of more than one empire.