Ken Verhoeven and the Art of Concealment and Illumination 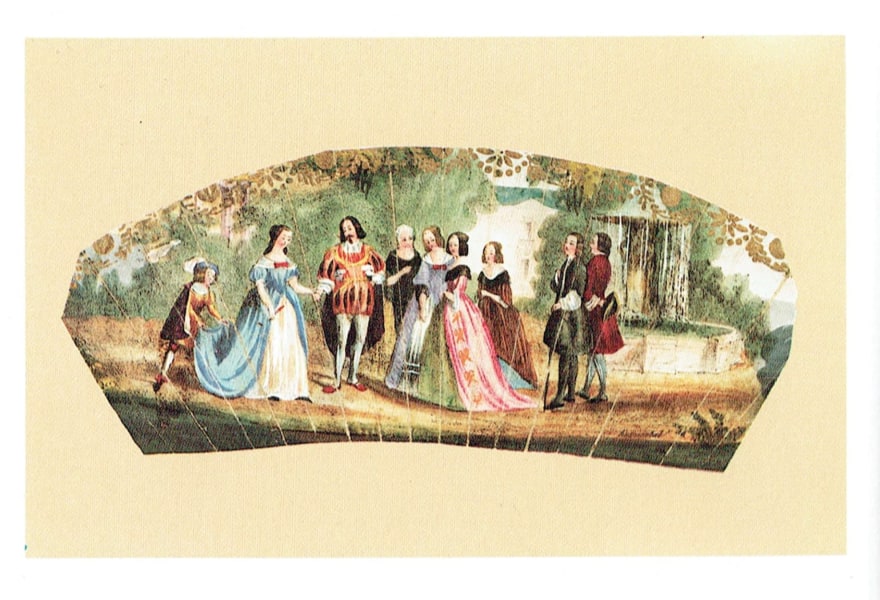 Recently I spoke to Antwerp-based artist Ken Verhoeven (1991), who currently has an exhibition at Galerie PONTI in Antwerp, which runs until 2 July. His flu-like symptoms did not prevent him from having an animated conversation about his parents' laundromats - where he earns a little extra money as a mechanic and which also form a source of inspiration - and his fascination for hand fans. A 19th century paper fan with the following theatrical sketch formed the starting point of this exhibition: 'Two maids, alone in the house, hide an amorous visitor in the laundry basket: the owners suspect that something is amiss because of a forgotten hat and furiously set out to him.’
I also go looking - for the relationship between fans and lampshades in the work of Ken Verhoeven to be exact.

MK Did you always want to be an artist?
KV Always? Not necessarily... 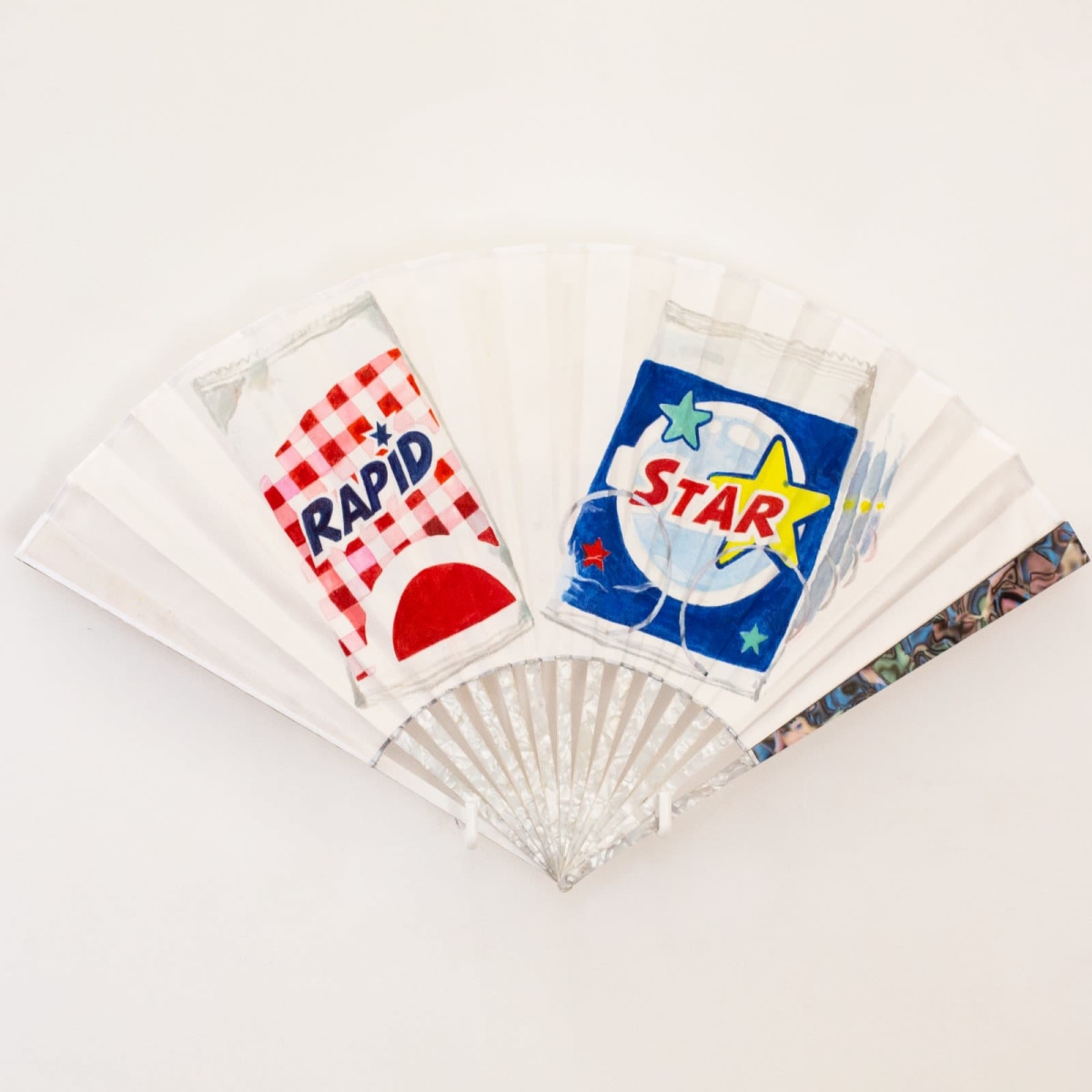 MK So how did you become an artist?
KV I actually rolled into the art world through the choice of secondary school. In my third year, already, encouraged by the teachers, I chose De!Kunsthumaniora [an Antwerp secondary school based on artistic training and education to prepare for an art, architecture or music education, MK]. In the fifth year, you could choose between autonomous and applied arts and I chose autonomous art with the emphasis on ‘free painting’. After the De!Kunsthumaniora I studied at the Art Academy in Antwerp.

MK Was art part and parcel of your upbringing?
KVNot at all actually. As a child, we never went to a museum or anything like that. My father has three laundromats - where I can be found regularly to earn some extra money - and they sometimes serve as a source of inspiration.

MK Was there anything or anyone besides your parents that stimulated you?
KV Right before de!Kunsthumaniora, around the year 2000, I had a friend with whom I used to play video games. That's how I got interested in drawing and visual arts. From the fifth year onwards, my teacher of the ‘liberal arts’section at De!Kunsthumaniora had a major influence on me by teaching me a about contemporary art. 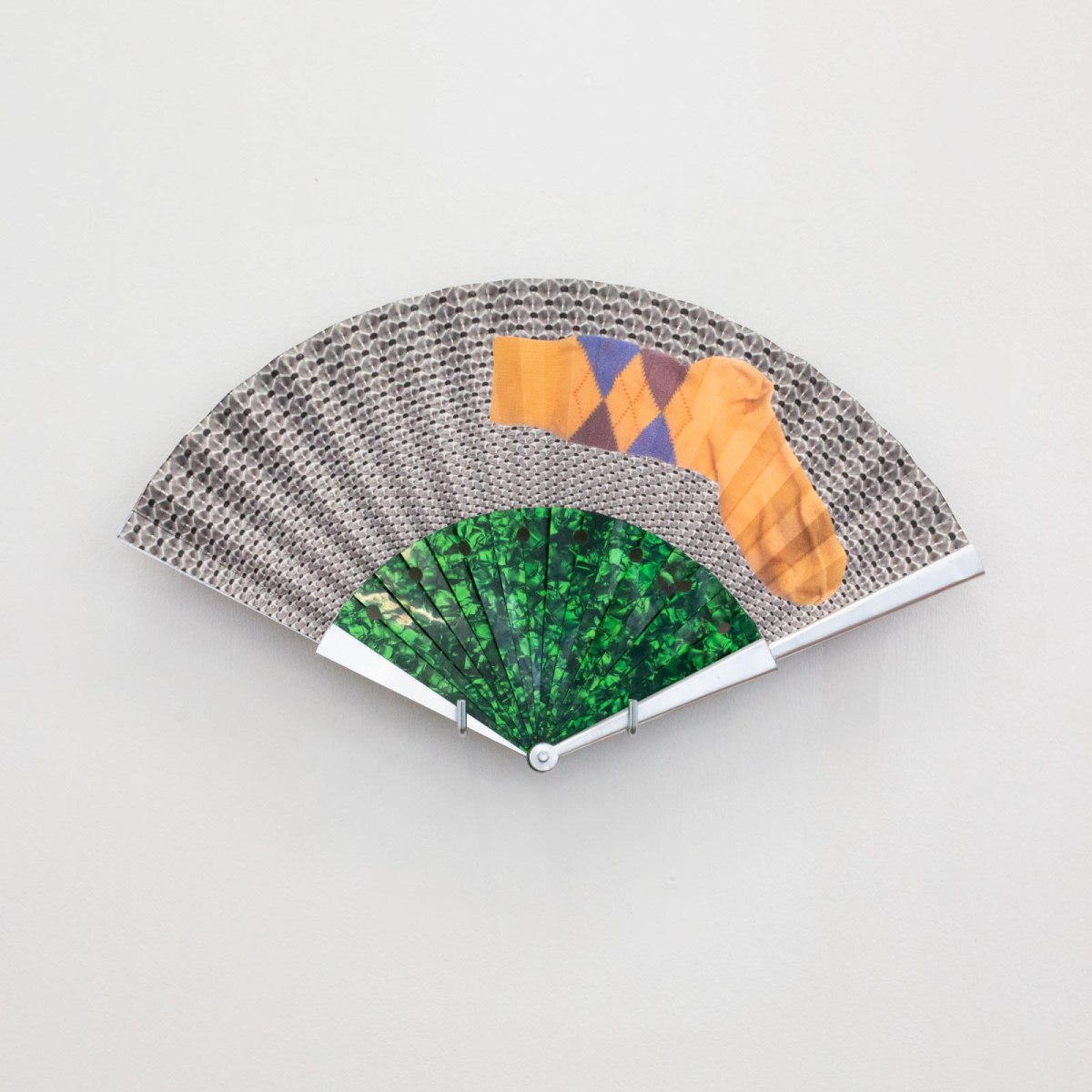 MK How did you notice?
ZAThat realisation was quite naive at the time. I still don't know exactly what it was back then. What I do know is that at that time I was very interested in artists like Martin Kippenberger. Especially in his paintings, which were totally anti-aesthetic. Badly painted on purpose, yet, I still found them beautiful. It's crazy to realise how, over time, we get used to images that we first find 'bad' and later accept. Apparently, as time passes we get used to things that we initially qualify as evidence of bad taste.

MK Of course, Kippenberger was also a thoroughbred anarchist who didn't care about anything or anyone.
KVWell...like most interesting artists througout history.

MK Ok, back to those videogames. Were you still interested in them when you were at the academy?
KVVideogames are visually very powerful and they still interest me today, but they never play a direct role in my art. They were not really stimulated at the academy either. There was a lot of input from many different teachers, which was quite confusing at times. But I remember one teacher who specialised in the subject of art technology and knew a lot about anthropology and history. I was also very interested in those areas. 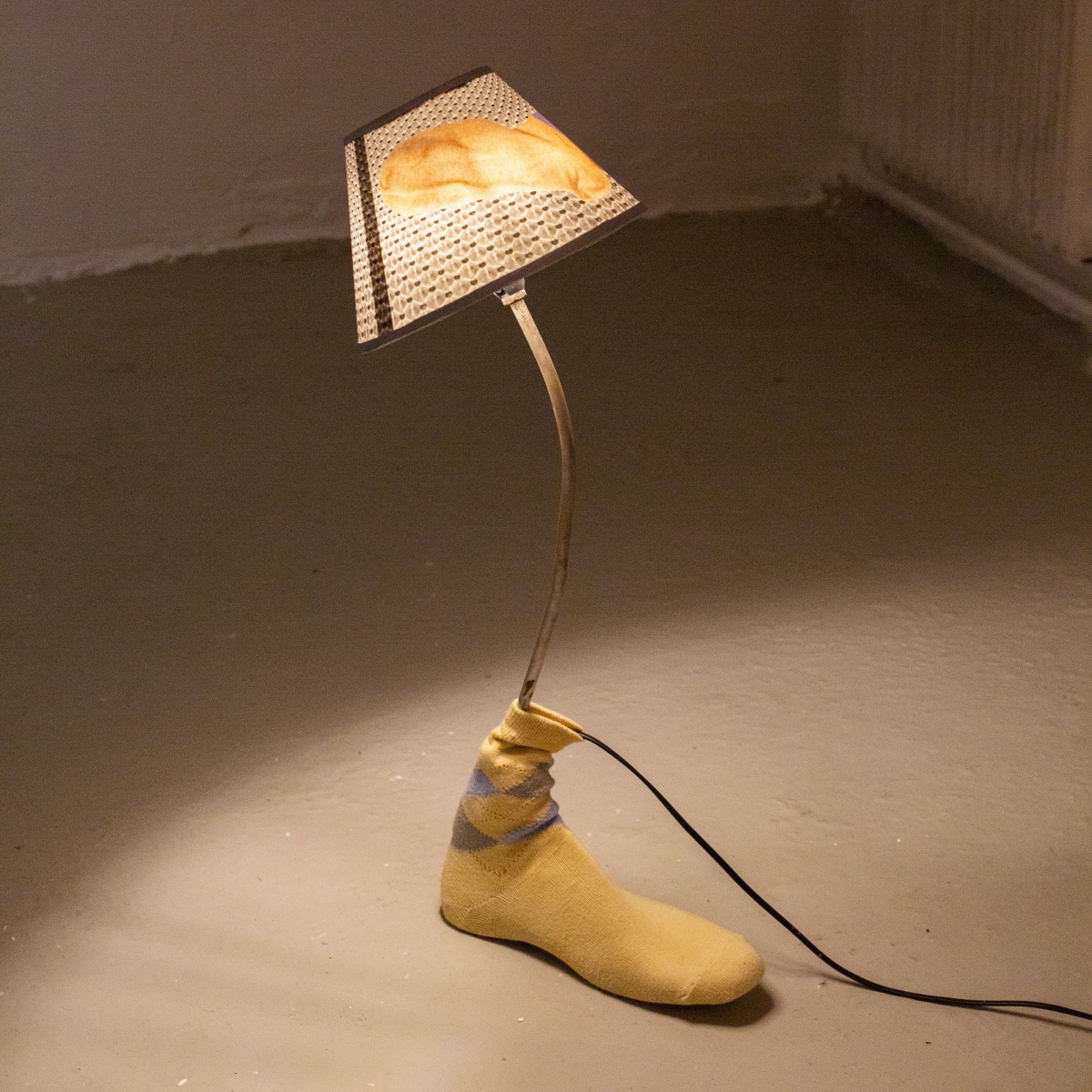 MK What attracted you to it?
KVI think that many of the artefacts and objects that are made initially have a functional meaning, because they are tied to certain rituals for instance. My work largely consists of artefacts such as fans, ponchos, friendship bracelets that have had specific functions at a certain time, for a certain group of people, that we don’t necessarily understand. And when they end up in a museum, as a dead or dormant object, we don’t always know what the function of those objects was. We can guess based on our own knowledge, but sometimes it is no longer possible to find out what the original function was because customs or habits they were part of have diappeared and, as a result, the knowledge has been lost.

In his book Lines: a Brief History, the British social anthropologist Tim Ingold talks about the fieldwork of fellow social anthropologist Peter Gow among the Piro people. And especially about Sangama, the first Piro who could ‘read’. He lived alongside their white colonial masters, on hacienda plantations, in a debt bondage relationship. Sangama would pick up the discarded newspapers from the white men and read them just as he saw them do every day. He associated the intrinsic patterns created by the graphics of the newspaper with the linear designs used by the Piro. Usually on the face and body. During their healing rituals, the shaman takes an infusion of Ayahuasca (a hallucinogenic plant brew) and then becomes aware of snake-like designs covering their entire face. When these patterns touch the lips, they are translated into chants. For Sangama, the paper melted away and transformed into the face of a woman who communicated with him. He was convinced that he understood what was in the paper. And from his own thinking patterns and logic, this assumption is correct. I can’t help but trying to understand my surroundings based on my own logic.

MK You’ve made a number of painted fans for your solo exhibition at Galerie PONTI in Antwerp. Where did that idea come from?
KVI have always been fascinated by objects that we no longer use but are familiar with. From the 16th century onwards, during the Renaissance and the Baroque, fans became popular in Europe. Now replaced by the electric fan and air conditioning, hand fans have lost their original function and are now to be found in historical museums. For me, however, they have the meaning of a carrier, as does the canvas for other painters. I like to link old rituals and stories to contemporary objects and situations in order to form new stories: from anecdotal to autobiographical. 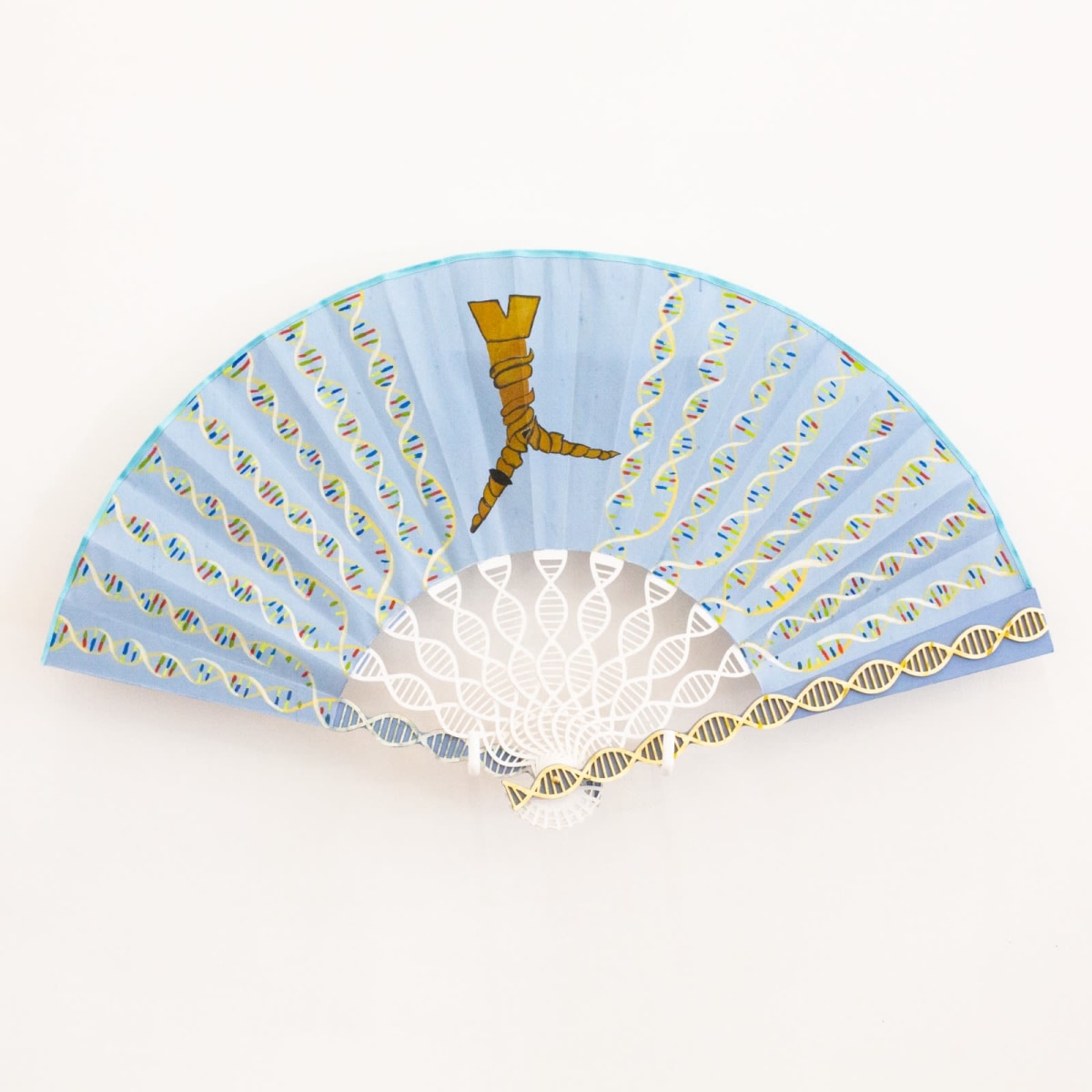 MK Do you have any other examples of your working methods?
KVFor the exhibition Die Badewannen von Kaldewei in the LLS Palace in Antwerp in 2020, many aspects came together that fascinate me as an artist. I am interested in curiosities that I see around me and that I associate with other images or objects with which I notice a (formal) similarity. The works in the exhibition were inspired by Inca ponchos and and templates of bathtub top views. They express a visual analogy between ancient rites on the one hand and contemporary customs on the other.

MK Can you please explain that?
KV For example, in the Cinquantenaire Museum of Art and History in Brussels I once saw an exhibition of textiles from Peru. At a certain moment I saw a poncho with the same dimensions as the template that I had made from a bathtub measuring 90 x 180 cm. So the poncho had exactly the same size as the bathtub. And the shape of the poncho also matched the shape of the bathtub. So I started making about 11 bathtub-ponchos in the same size with a cut in the middle. Sometimes I applied hair to it, processed with hair dye, which was really fun. At the end, the poncho referred to a bathtub as well as a piece of clothing and a work of art. I like to show painted or worked surfaces in a sculptural dimension. 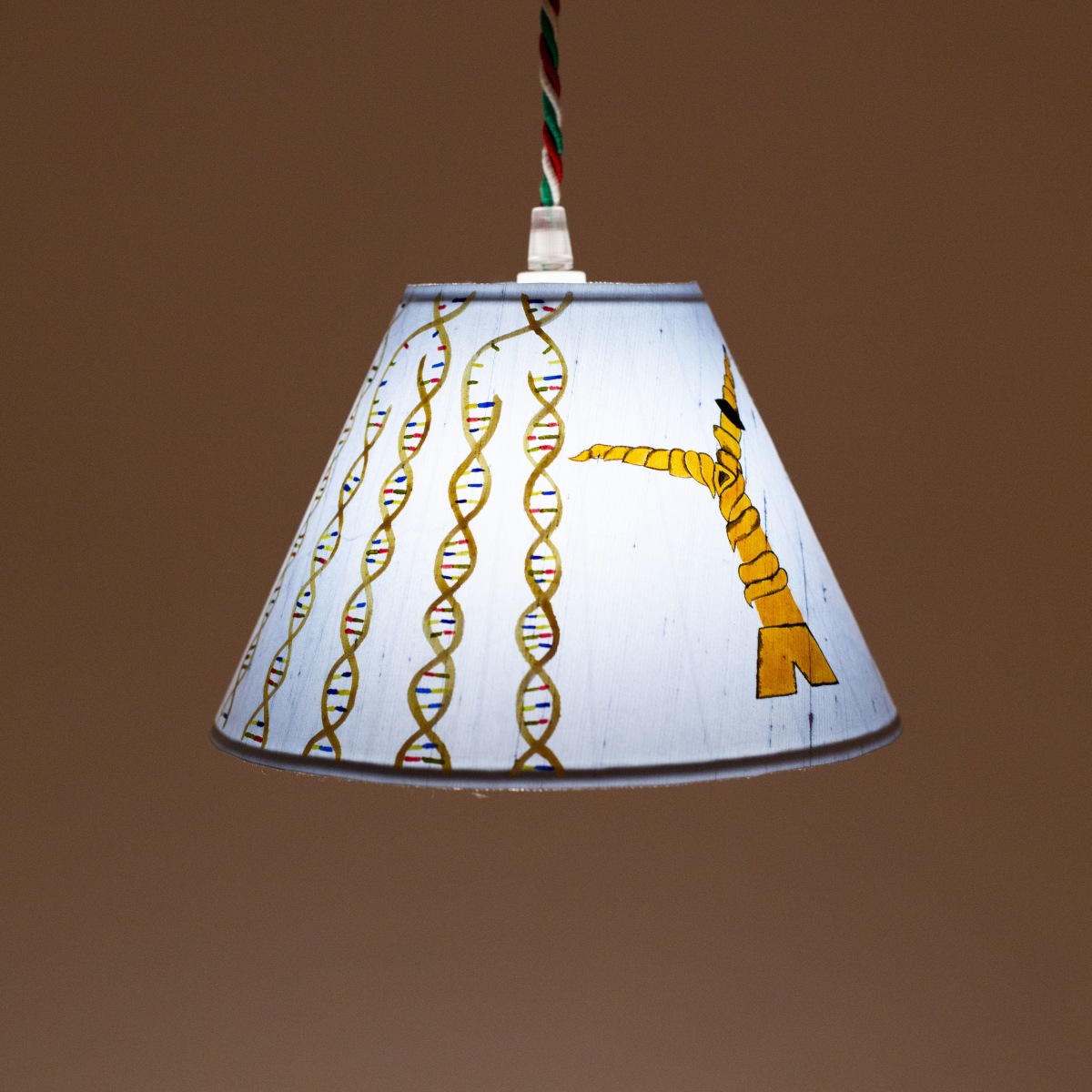 MK Can you also say something about that in relation to the fans and lampshades that you are currently showing at PONTI?
KVYes, in this exhibition it is about visual analogy too. I had been looking at and researching fans for a long time. I noticed that the design drawings have a rainbow shape. And then one day I was looking in a book about the Italian futurist artist Giacomo Balla where I saw a design drawing for lampshades. I noticed that the lampshade has the same basic shape as the fan, but upside down. So at PONTI I showed fans on the ground floor and lampshades with the same images in the basement of the gallery. So the images in the exhibition repeat themselves, but in different objects. I like the use of an object as a metaphor because of its ability to shift the meaning of an image. For example, a fan consists of these compartments that you see emerge one by one as you slowly unfold it. Once opened, you see the painted image in its entirety. A kind of narrative emerges, just like in a film, which also consists of different sequences that together form a whole and tell a story. The fan can conceal the image and the lamp can illuminate it.

MK Is PONTI your representing gallery?
KVI am not committed to an Antwerp gallery because I have already exhibited so many times here. I previously also showed my work at Simon Delobel's experimental gallery Trampoline. I would rather have a gallery outside Antwerp.

MK What are you currently working on?
KVAfter an exhibition, I always take time for reflection in order to understand what I have done and to rethink my art practice. It feels liberating to give myself space to think after such an intense period and to completely open up to new ideas. I am also thinking about Amorous visitor (curver lingo 30l), a painting of a loving couple in a laundry basket, which is on display in the basement of the gallery. According to the anecdote on the invitation card, these women are hiding their lover in the laundry basket, among the dirty laundry. A scene that also occurs in the opera Falstaff. I would like to explore this image further: the laundry basket as a container for a secret love. Things that are hidden between the folds...

MK How do you see your future as an artist?
KV I take things as they come. But I would like to continue to surprise and inspire myself. With each new project I become obsessed with the theme or the subject in question and know all about it. The idea of acquiring knowledge is in fact what stimulates me most. 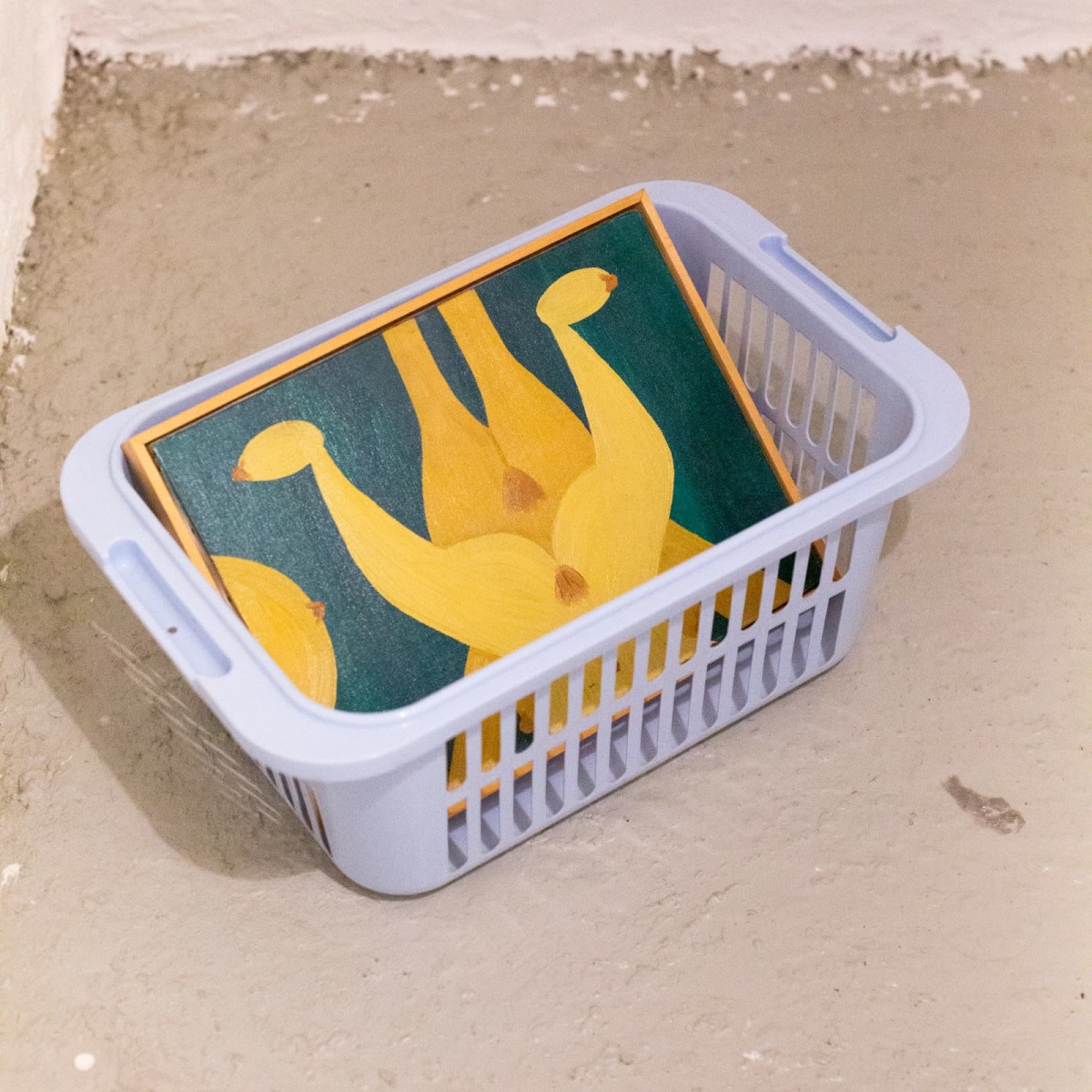 Ken Verhoeven, Amorous visitor (curver lingo 30l), 2022, PONTI
The exhibition 'Hand Fans & Lamp Shades' can be seen until 2 July at PONTI in Antwerp
In this article