The studio of... Steven Aalders 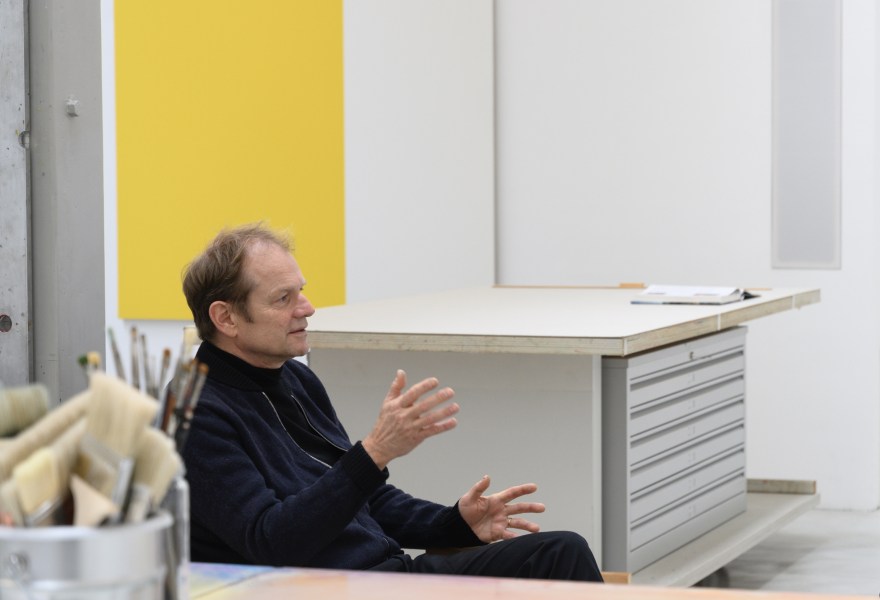 What does the ideal studio look like? How much time does an artist spend in his studio? Is it a sacred place? In the series 'The studio of' this week: Steven Aalders, whose solo exhibition can be seen in the Kröller-Müller Museum until 26 June.

Do you go to your studio every day?

I prefer to go to my studio six days a week. I need a steady work rhythm to be able to make something, to add a little bit to the big picture every day. The secret of making something lies in doing it. Like Vincent van Gogh said: “Work comes from work.” 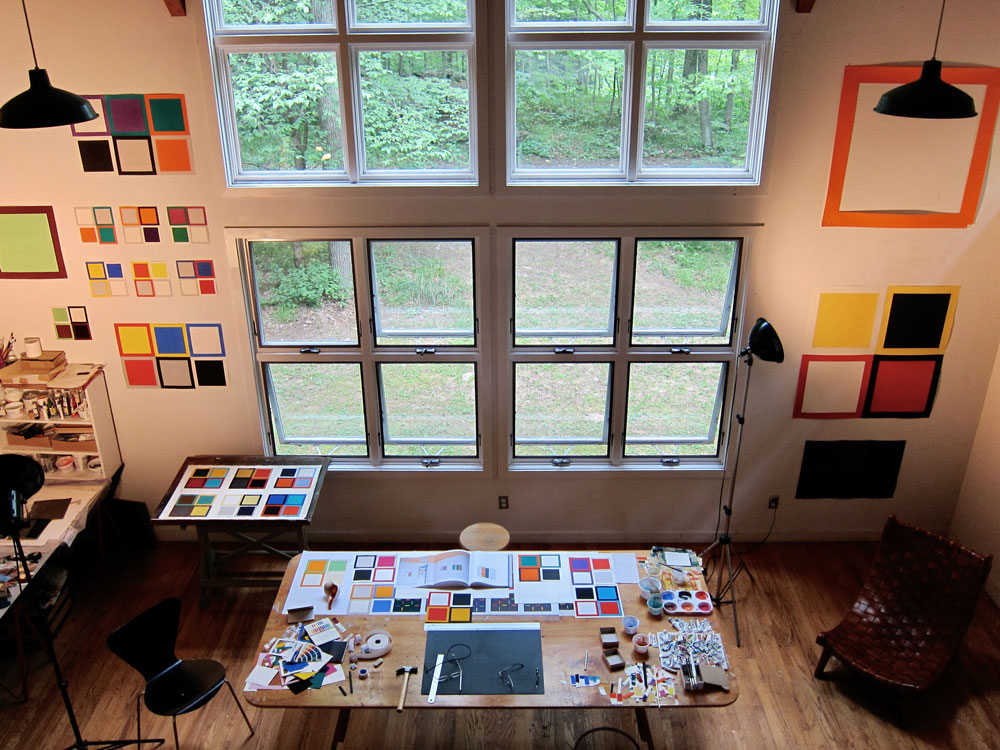 What time do you leave for your studio, and how: on foot, by bicycle, public transport or car?

I leave home at about nine a.m. I bike past the Rijksmuseum, through the Vondelpark, to my studio. That is in Oud-West, a small building that is enclosed between houses. It was built more than a hundred years ago as a milk factory. After that it was a rubber factory, then a sewing workshop and there was also a shooting club in it. When I came here thirty-five years ago, it was a derelict neighbourhood. These days Oud-West is a popular neighbourhood. Five years ago we were able to buy it and renovated it. 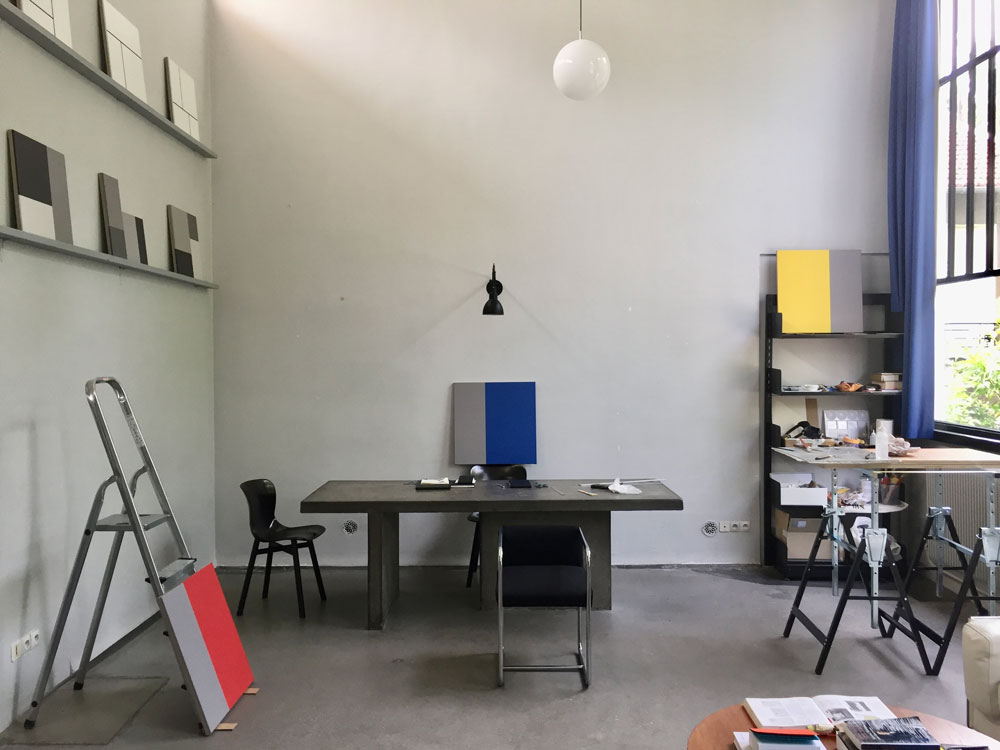 Do you hold on to certain rituals in your studio? Music or silence?

When I arrive and close the door behind me, I put on my paint clothes. I prepare the canvases that I will be working on, mix the oil paint that I will be using that day and start painting. After half an hour, when I'm up and running, I put on music. Sometimes I want silence, but most of the time music helps me concentrate. I like piano music, sonatas by Chopin, Beethoven and Bach. The same CD over a period of time. In recent weeks, all of Bach’s pieces for organ performed by Marie-Claire Alain. Splendid! It is also good to work to Morton Feldman's silent sounds, but Bach is always good for concentration: it’s simultaneously calming and exciting. 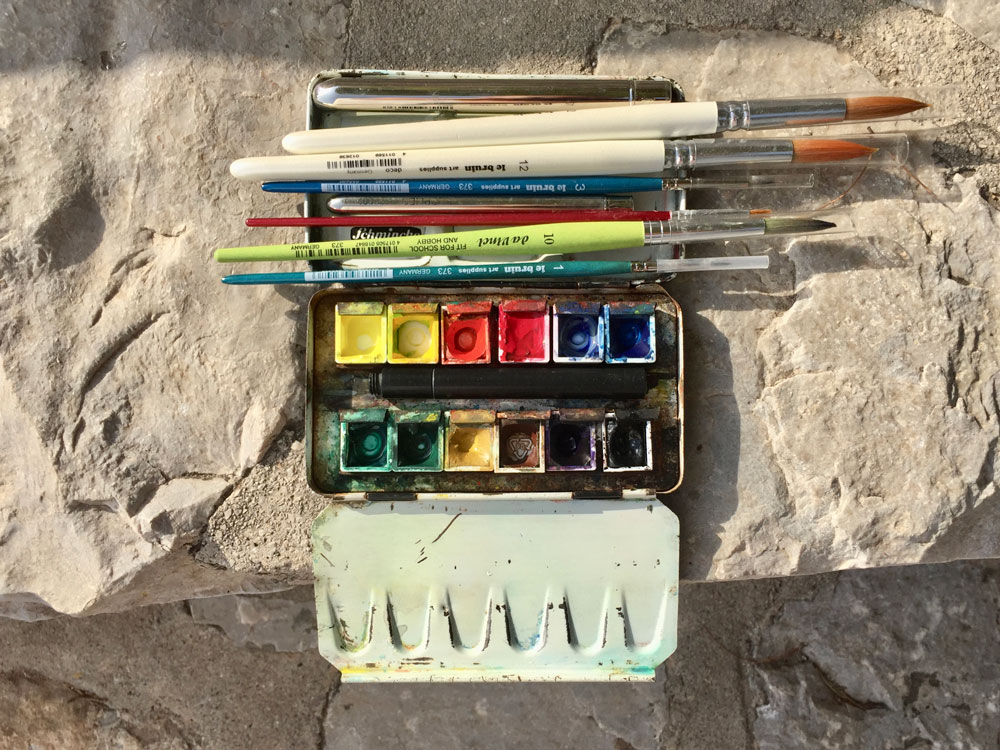 How important is light to you?

Daylight is essential for mixing the paint, this studio has plenty of natural light. It is a high space with blank walls and – for a factory – a typical sawtooth roof. There are large north-facing skylights and small south-facing windows with louvers that allow me to filter the sunlight in the summer. As a result, there is a gradient of warm and cool light along the walls. Tubular lighting is attached to the beams, but I hardly ever switch them on. Even on a very dark winter day, there is always enough daylight to work to. I don't work at night anyway.

What does your work process look like? Do you work everywhere and all the time or does work only commence the moment you enter your studio?

Life and work are inextricably linked for me. Wherever I am, whatever I experience, whatever I see, read or hear, I incorporate in my work. I always think about my paintings; how to make them better, how to sharpen them. Taking distance, seeing new things, new encounters, they are indispensable for inspiration. Most ideas arise while traveling. I always take a sketchbook and a box of watercolours with me. 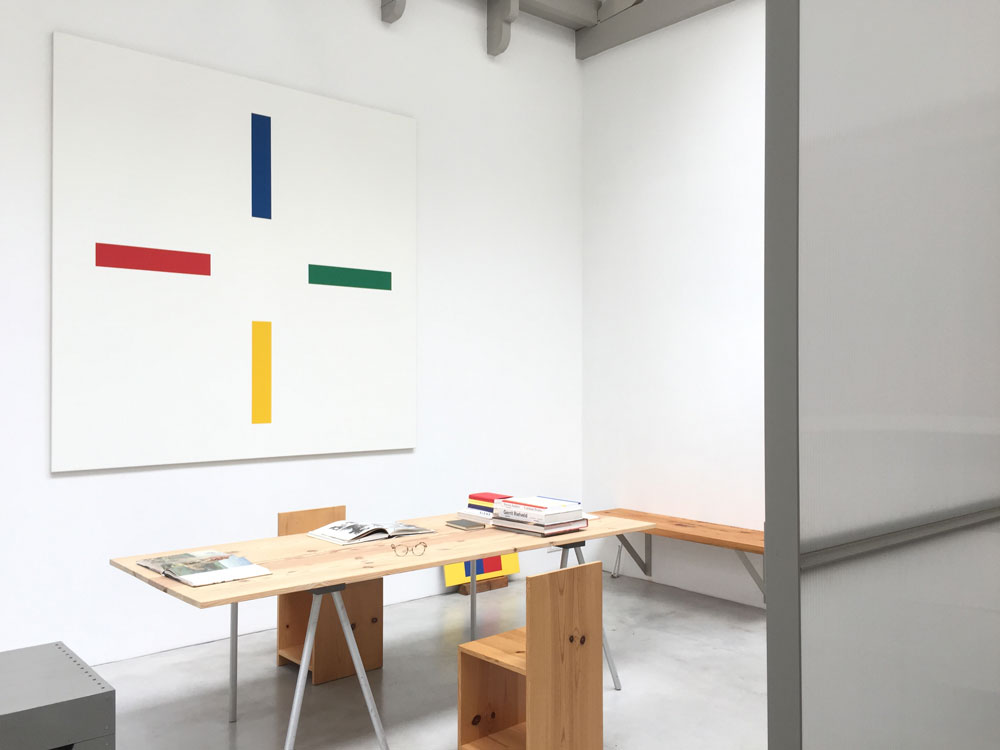 How much time do you spend on average per day in your studio?

In the morning I work from nine until noon. Then I go out for lunch, usually home. In an hour or two I'll be back in the studio and work until I'm done. Then I cycle back. It differs: one time shorter, the other longer. I often sit and watch for a while. It has been that way for thirty-five years. In between I also worked in various studios abroad. In the late eighties in Barcelona, in the summer of 2011, in a studio of the Josef Albers Foundation in the woods of Connecticut, and in 2017 in the beautiful studio house of Theo van Doesburg in Meudon, near Paris. Then the studio was also the home. 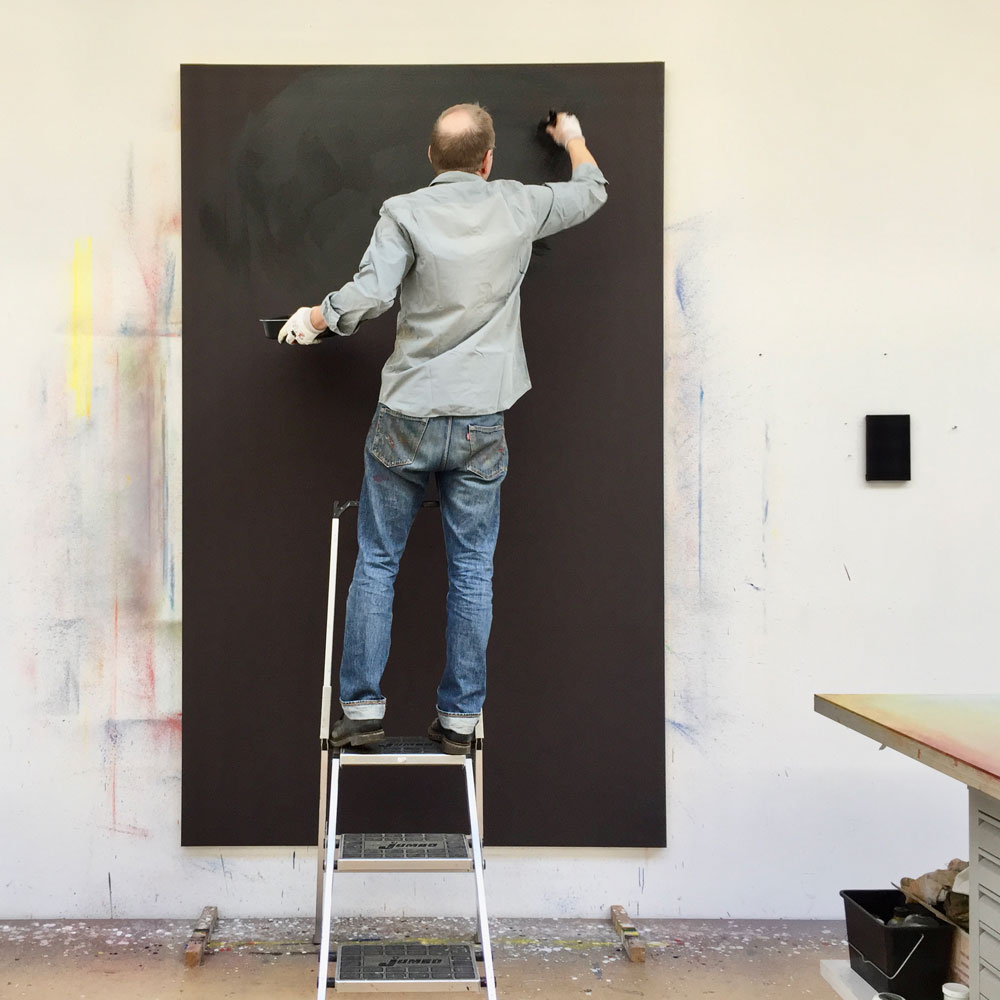 Is your studio a sacred place?

My studio is an ordered unit where the tools are in place, where a chair, a door, a table or a painting relates to the whole space and everything in it. I cannot work in chaos. I like a self-created order. I've always had that. Going far back in my memory, I consider the little desk – a low table with a chair – that my mother had set up for me as a little boy in the living room of our house as my first studio. I had an aquarium with goldfish on it, paper to draw, books and the like. Before dawn, when everyone was still in bed, I was already drawing. I had a place. The studio is therefore a place where things can be made and tried out. A workshop or, if you prefer, a laboratory. Theo van Doesburg said: 'Your studio must be like a hollow crystal, a glass bell jar,' and: 'The palette must be made of glass, the brush, square and hard.' This encouragement to clarity may not apply to everyone, but to me does not sound strange to my ears. It is said that Mondrian's studio stands in the tradition of the nineteenth century as a temple, but it was also an expanding space for his paintings. He continued his paintings on the walls of his studio using pieces of cardboard. I also experiment with arrangements of several paintings and colour areas on the wall. The large studio I now have allows me to do this. I can try out installations a one to one scale. 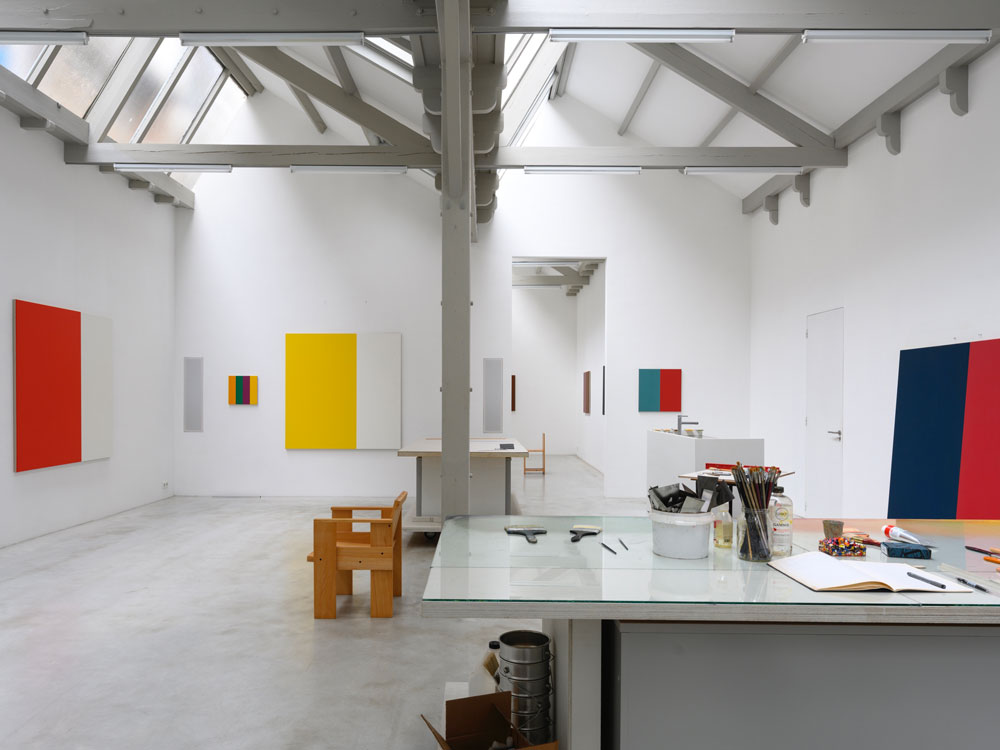 Do you receive visits there; collectors, curators or fellow artists?

I like having visitors. I find it valuable and also necessary to receive regular comments on the work and to exchange ideas with fellow artists and interested parties.

What is the most beautiful studio you have ever seen?

I know of no more beautiful studio than my own studio. Other studios that I like are those of artists I admire. Of course I only know Mondrian's studio in the Rue du Départ from photos, but I was often in that enchanting space in my mind. In the impressive buildings in New York and Texas, where Donald Judd thought out and installed his works inexorably, however I did not go there until after his death. I did visit Agnes Martin in her studio in Taos, New Mexico. That was about twenty-five years ago and just as impressive in all its austerity. By then she was living in a retirement home. Posters of Georgia O'Keeffe were pinned to the wall in her room. She spoke of her love for Goya and her admiration for Judd. In the afternoon we drove to the studio with her car. It was an inconsiderable little building on the side of the road. Inside, a still canvas hung under a skylight. To the right is a table with jars of gesso, some brushes and plastic plates with watery paint. In the middle of the small room stood a table, on which a large sheet of paper full of small scribbled calculations, which served to determine the division of the planes of her canvases. A stack of paintings leaned against one wall. We looked at them one by one. A beautiful new series with thin pink and light blue horizontal stripes. At the last she asked, "Do these paintings make you happy?" I nodded in agreement to which she replied, "Good! That's why they were made for.'

The ideal studio is as small and wide one’s imagination. 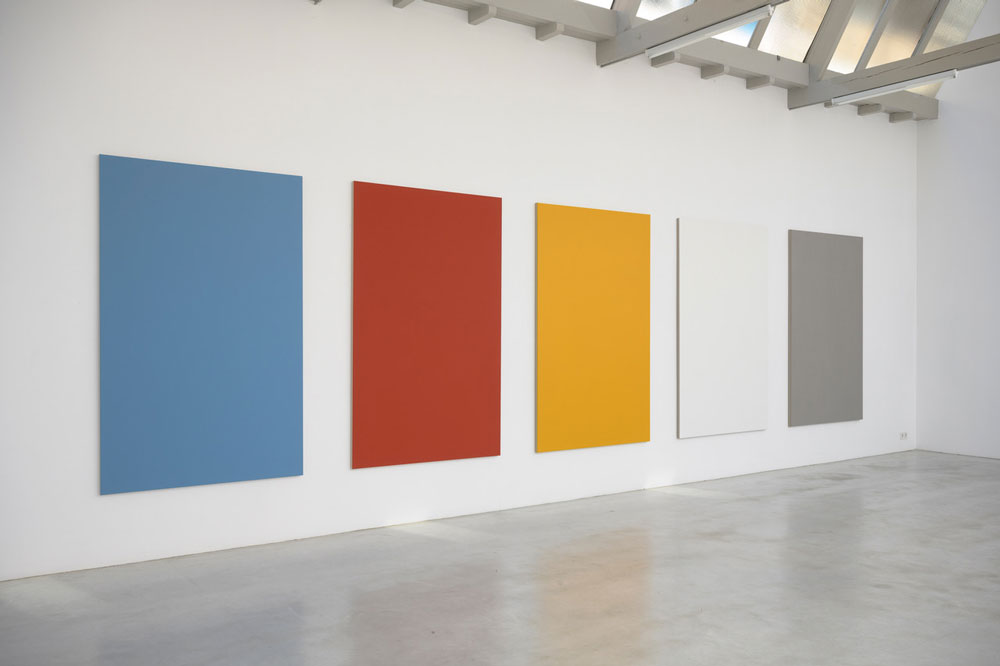 Studio Amsterdam, 2022
In this article