Fleur van Dodewaard: The Artist in Her Studio | Last chance 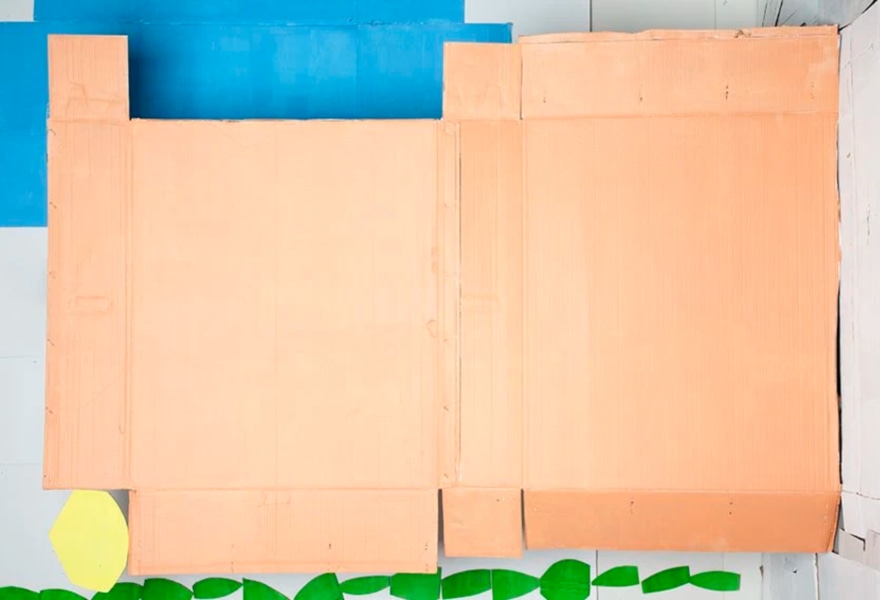 Fleur van Dodewaard, The Artist in the Garden on the Grass with Lemon, 2022, galerie dudokdegroot

It’s a little wonder that Fleur van Dodewaard (NL, 1983) has not had a solo exhibition in a Dutch gallery much more often, since work has been shown all over the world. She has had a number of shows in Japan and her work has been shown in galleries in Brussels, Rome, London and Moscow, but only once before in the Netherlands. Before attending the Rietveld Academy, Van Dodewaard studied Theatre Studies at the University of Amsterdam. Formally speaking, she is a photographer, but one who only photographs homemade sculptures or collages. Van Dodewaard therefore sees herself first and foremost as a visual artist. 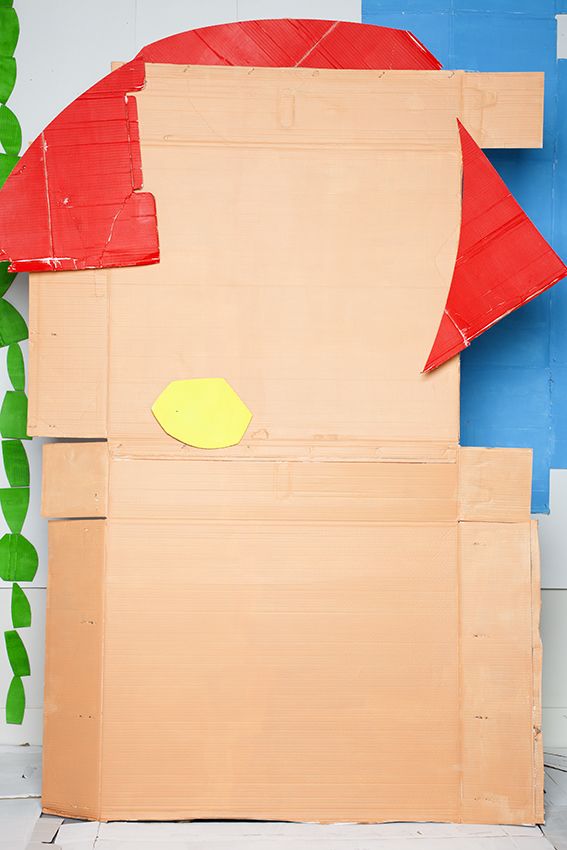 Fleur van Dodewaard, The Artist in Her Studio in a Red Armchair at the Window with Green Leaves, 2022, galerie dudokdegroot

Salmon-coloured cardboard boxes
She made collages for The Artist in Her Studio. The leading role in this series of works is reserved for large cardboard boxes cut open, painted salmon pink, each of which is a portrait of the artist. As cheerful as the colorful collages are – in addition to salmon pink, she also uses the colors grass green, lemon yellow and bright blue – the underlying theme is a serious one.

In an interview with Gallery Viewer, Van Dodewaard says: “The Artist in Her Studio is about my own situation, as a person, woman, artist, mother in the world. And that subject of how things are divided between men and women (and other gender identities) keeps me busy. Since I became a mother (since almost 6 years) I have been confronted much more directly with this theme. I'm happy about that. It has given me a better understanding of how things work in the world, on a very basic level. And I am aware that I am a part of it and that I have an influence on it. At the same time, I am constantly looking for other ways to make an image. This is always a game between painting, sculpture and photography. In this way, various references from my own life, art history, society, are reflected in the work.”

The Artist in His Studio
The title of the show is also a reference. In his book The Artist in His Studio (from 1960), Alexander Liberman takes the reader along the studios of Braque, Chagal, Giacometti, Dubuffet and Leger, among others. All men. In fact, the book’s title casually admits it; an artist is a man and those men determine how all of us, women and men, look at art and, by extension, experience the world around us in a broader sense. 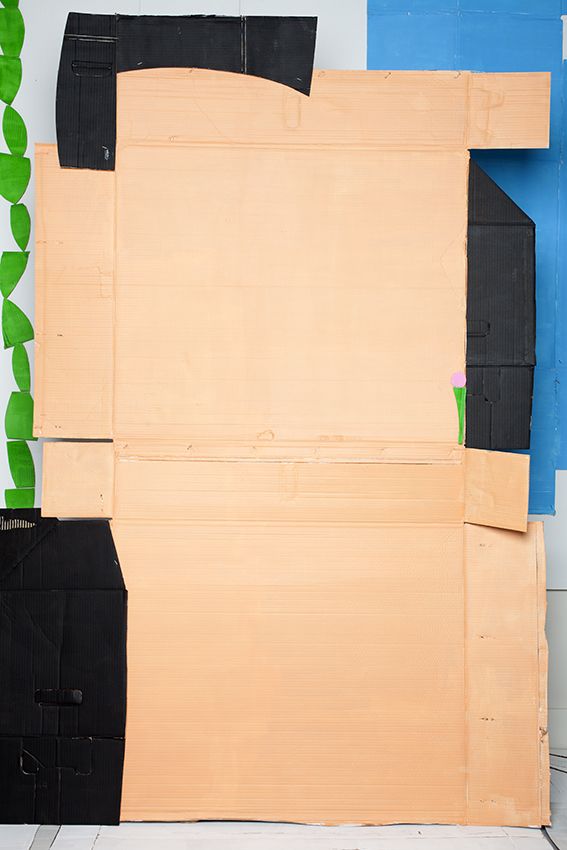 Fleur van Dodewaard, The Artist in Her Studio in a Black Armchair at the Window with Green Leaves, 2022, galerie dudokdegroot

“A few years ago I explicitly started looking for female examples when I realized that I had mainly looked at the work of male artists. There are many more male examples, but female artists certainly do exist, also historically, they just need to be exposed.” Van Dodewaard responds to this imbalance by allowing elements from various well-known works from art history to return in new works.

Playful and intuitive
Her working method is playful and intuitive: “I chose cardboard for this work because it is much easier to shape and I was therefore able to introduce a bit more figure and narrative. Anyway, I like to work with material that is already there, that I find somewhere, in the studio or elsewhere. I let the existing properties of the material and the object determine the final form. I find that exciting. That way you come up with things you can't come up with yourself.” 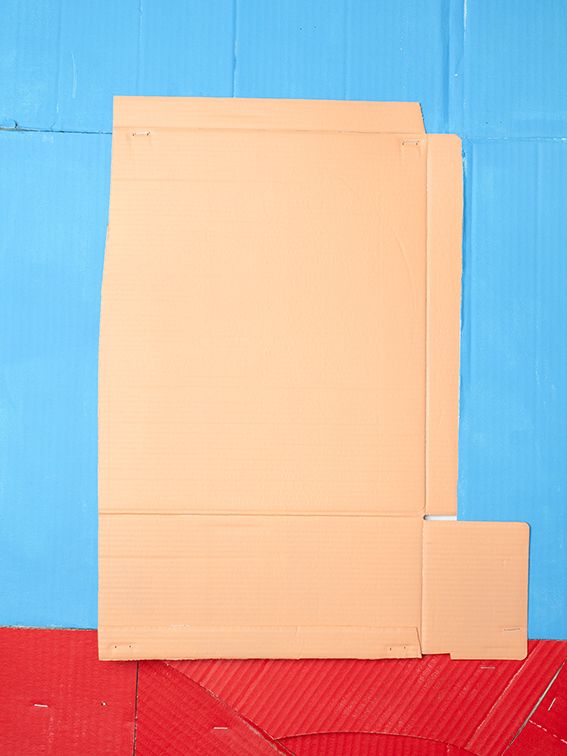 Fleur van Dodewaard, A Portrait of the Artist as a Young Woman, 2022, galerie dudokdegroot

Van Dodewaard gives the works titles from which you can determine which work is involved, such as The Artist in the Garden on the Grass with Lemon or Portrait of the Artist as a Young Woman, without actually mentioning the work. “A pink painted cardboard box can be a body if you want to. You can determine that yourself. I always wonder which viewer of the work sees what, or who recognizes which reference. But it doesn't matter if you know it or not. It is also a method for me to create a completely new image.”

Staples, nails and tape
These new images of Dodewaard also inform the viewer how they were made. Everywhere you see staples, nails, tape and the occasional tear. She consciously leaves behind traces of the creative process, as a reference to the basic question that always occupies her mind: to what extent are people free and able to shape their own lives? “Just like I wonder: what is life and what could it be? I also wonder: what is a work of art and what could it be? It's also about going all the way back to that very early beginning of something. And the fact that you make it. It is an act, a process. First there is nothing. And then there's something. That is why I also use such basic materials and methods to make something and I also show traces of the making process. For example, scratches, tears, nails, tape, etc. That is also the exciting thing about photography.”