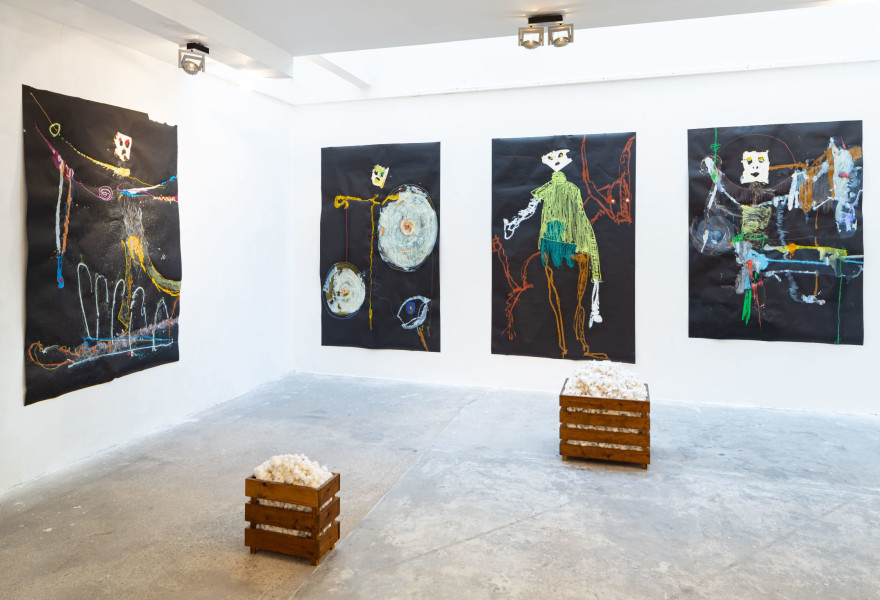 Thierry Oussou's second solo exhibition at Lumen Travo is about cotton and in particular about its significance for the often forgotten cotton pickers. He conceived his experiences on the Equilibrium Wind plantation in a probing series of works on paper. 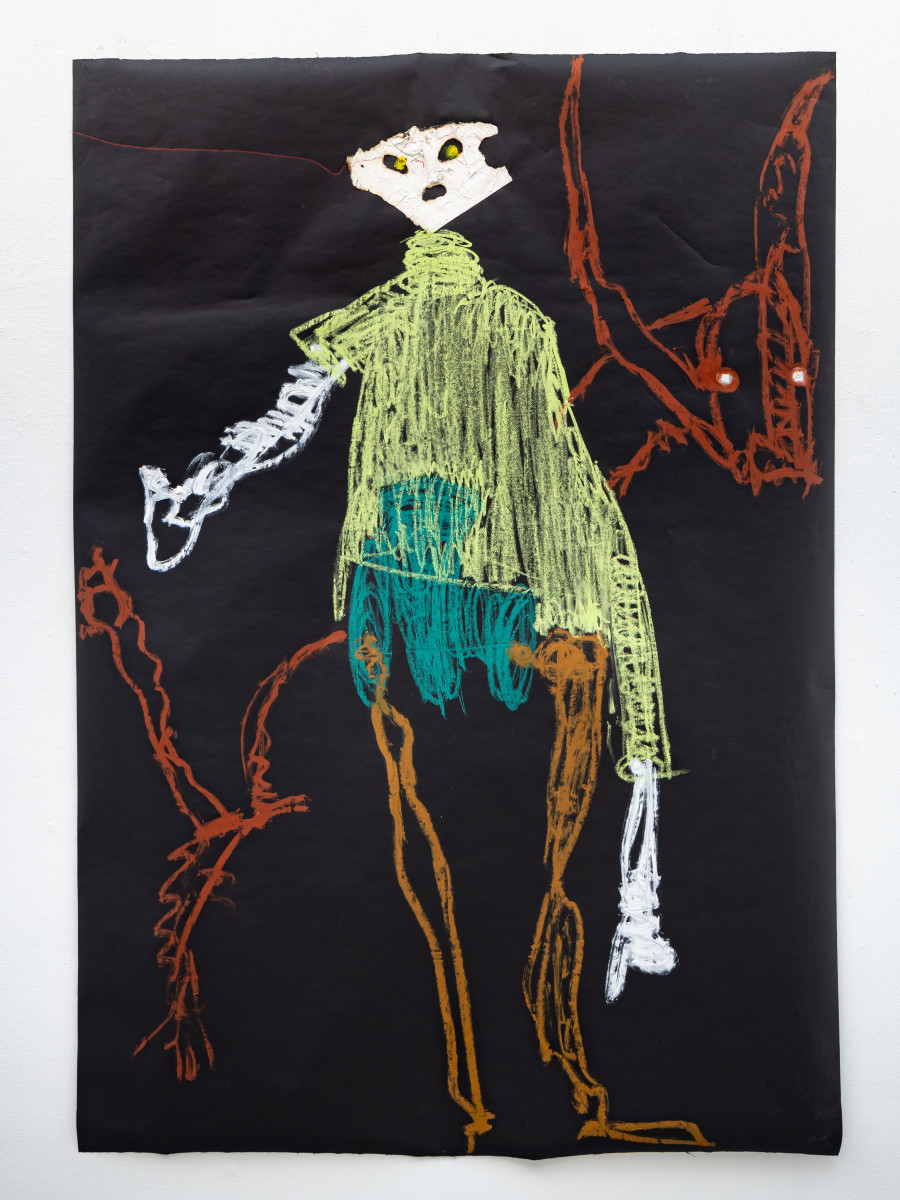 Thierry Oussou, Workers - Untitled V, 2022, Lumen Travo Galerie
Beninese artist Thierry Oussou named his exhibition after a cotton plantation in the Panouignan district. According to Google Maps, it is about a 3-hour drive north from the capital Porto-Novo. The Amsterdam-based artist worked on the plantation for some time and translated his experience into a series of portraits of cotton pickers.

Thierry Oussou (1988) grew up in Allada, Benin, where he founded the Yè Art Studio in 2011. To this day he gives art and culture workshops to institutions in Benin. In his work Oussou pays a lot of attention to professions that take place outside our scope, such as cotton pickers, bus and train drivers. Work that is done, but for which hardly any attention is paid and which is more or less taken for granted. Oussou was resident at Dokoutin in Brussels in 2014 and at the Rijksakademie in 2015-16. His work has been shown in the Oude Kerk and at the Berlin Biennale (2018) and that of Saõ Paulo (2019). 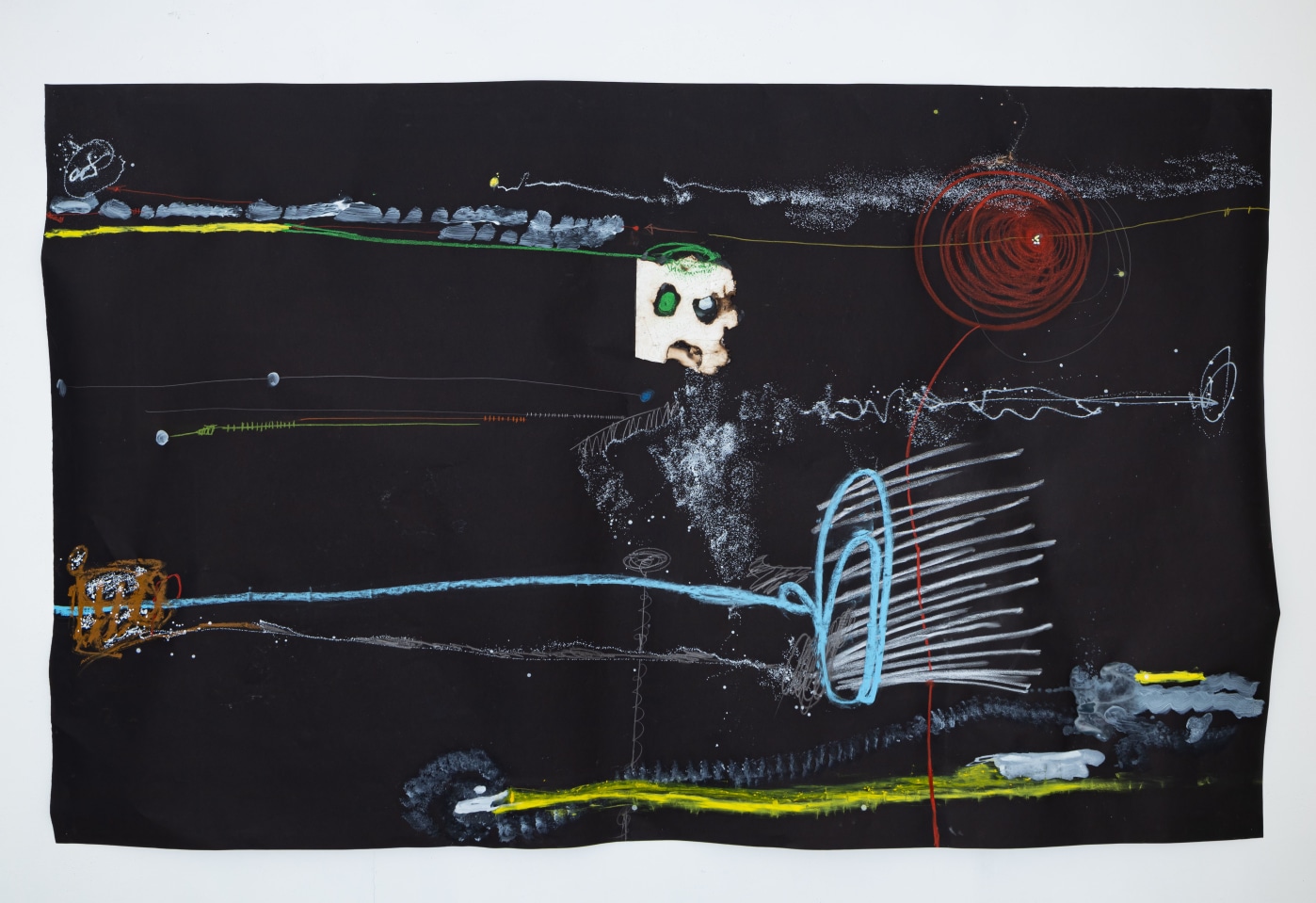 Social Archaeology
With Equilibrium Wind, Oussou continues with his characteristic method, which he calls social archaeology. With his paintings and drawing installations, he addresses questions about themes such as authenticity and visibility in relation to heritage and archaeology.

Often Oussou practices this method using an ethnographic object. For Political Strategy, his first show at Lumen Travo (2019-20), it was the old and popular African game Adji. A simple board game in which the player who has the most seeds at the end wins. Oussou had an eye for the social function of the game and emphasized that the game exposes a number of social values and economic relationships.

Equilibrium Wind
Equilibrium Wind revolves around all the meanings given to cotton. At a macroeconomic level, the 'white gold' is an important export product on which the economies of a number of African countries thrive. Cultivating cotton is therefore high on the agenda in debates about poverty reduction, sustainable economic development. However, on a microeconomic or personal level, cotton is not an export product or a commodity. Instead it represents human dignity, an income and the chance for a better life.

It is precisely this last meaning that is often overlooked in the West and plantation workers are completely forgotten about; if only because cotton plantations remind us of our colonial past. Partly for this reason, Oussou focuses on the plantation workers in the works performed on the large sheets of black paper. The distorted figures with the typical mask-like faces - they seem to have been worked with a lighter - float freely against the black background. 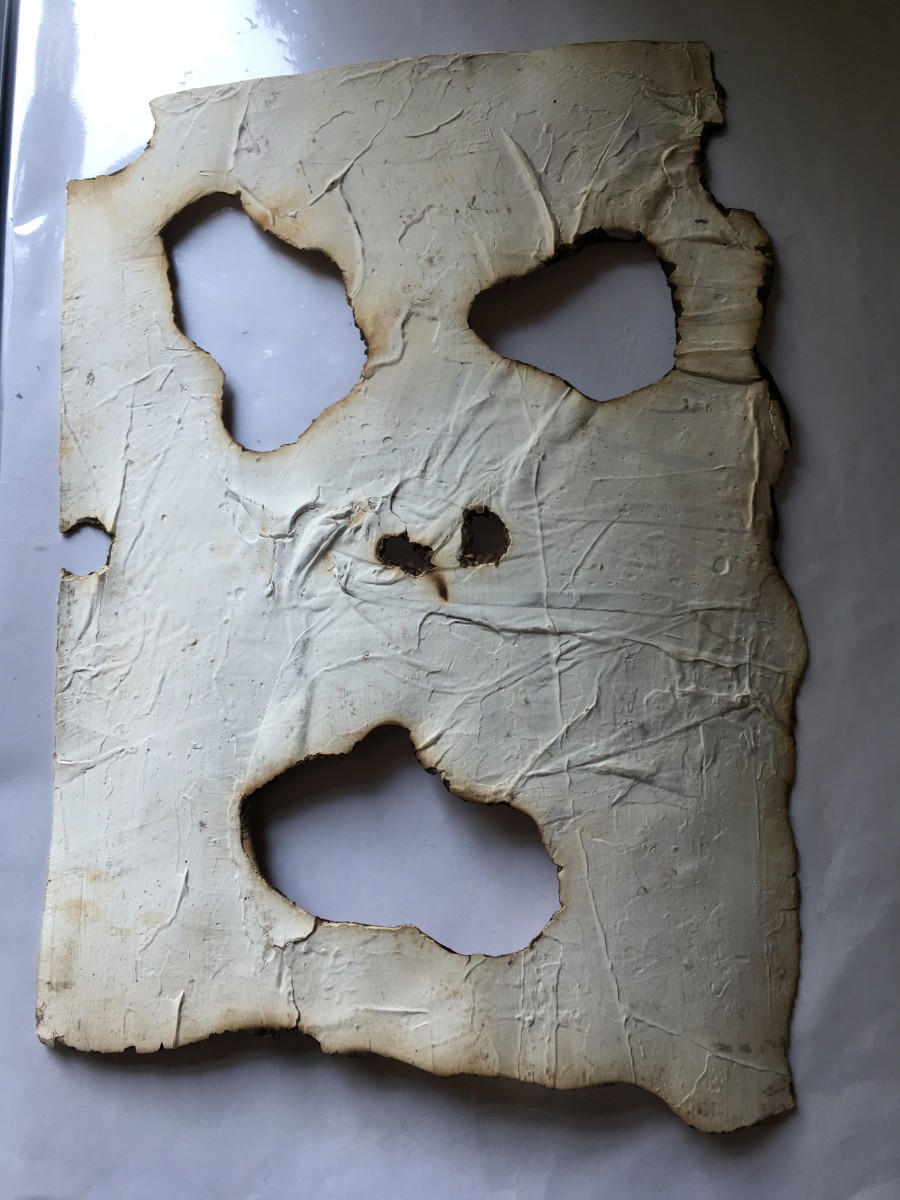 Example of a mask

The drippings, splatters, scratches, stripes and calligraphy make the works dynamic and lively; the movements that the figures make refer to the physical labour that takes place on the plantations. 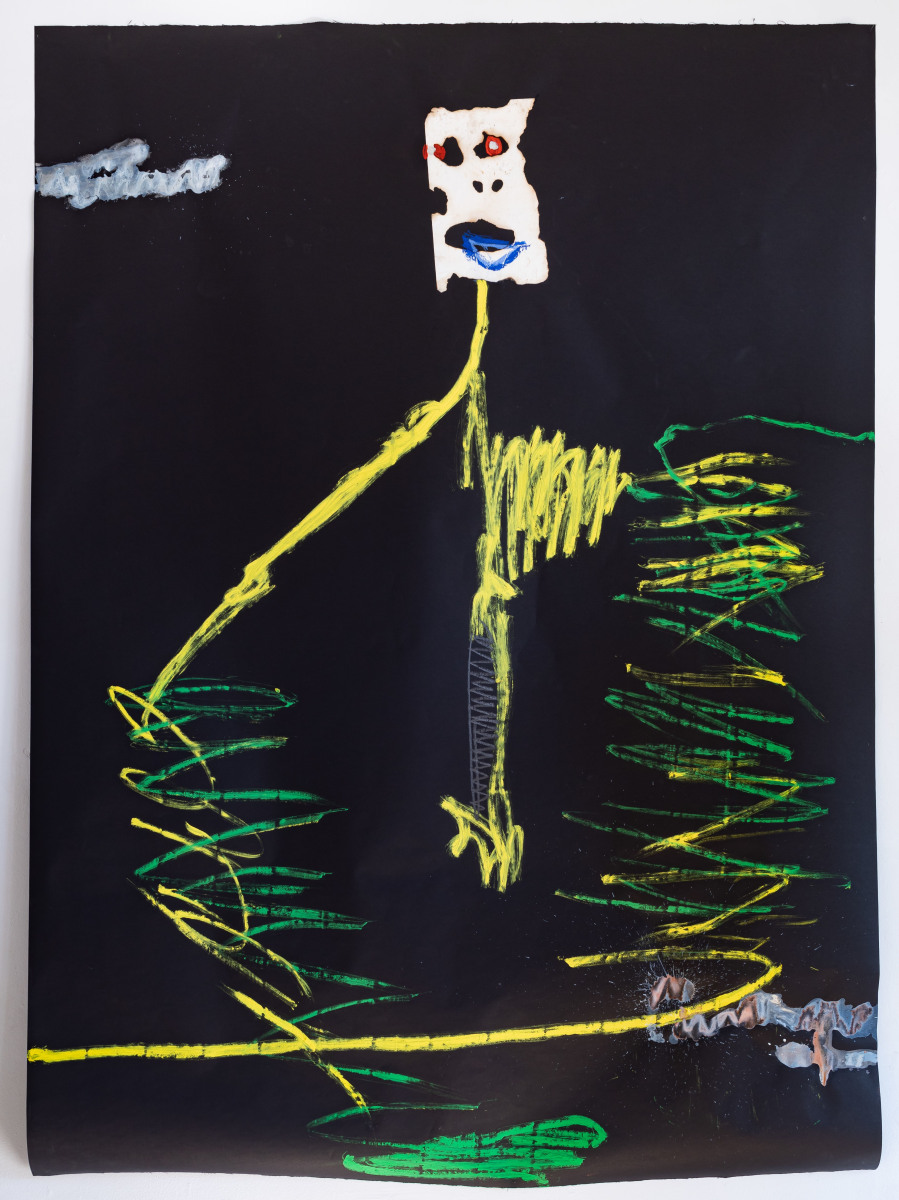 White Gold
By pointing out work that we overlook, Oussou subtly points out our consumerism and the globalisation that often froms the basis of this behaviour. We know exactly what is for sale, but have no clue as to how and where something is made. The lack of knowledge about the production process of cotton also means that there is a lack of awareness that the distance to cotton plantations in a metaphorical sense is smaller than is often assumed.

To bridge that distance and to underline our dependence on the work done by plantation workers, Oussou placed wooden boxes in the gallery filled to the brim with balls of cotton from the Equilibrium Wind plantation. Cotton as an ethnographic object – a global common denominator, one through which every viewer immediately understands who is on Oussous' works and why they’re important. 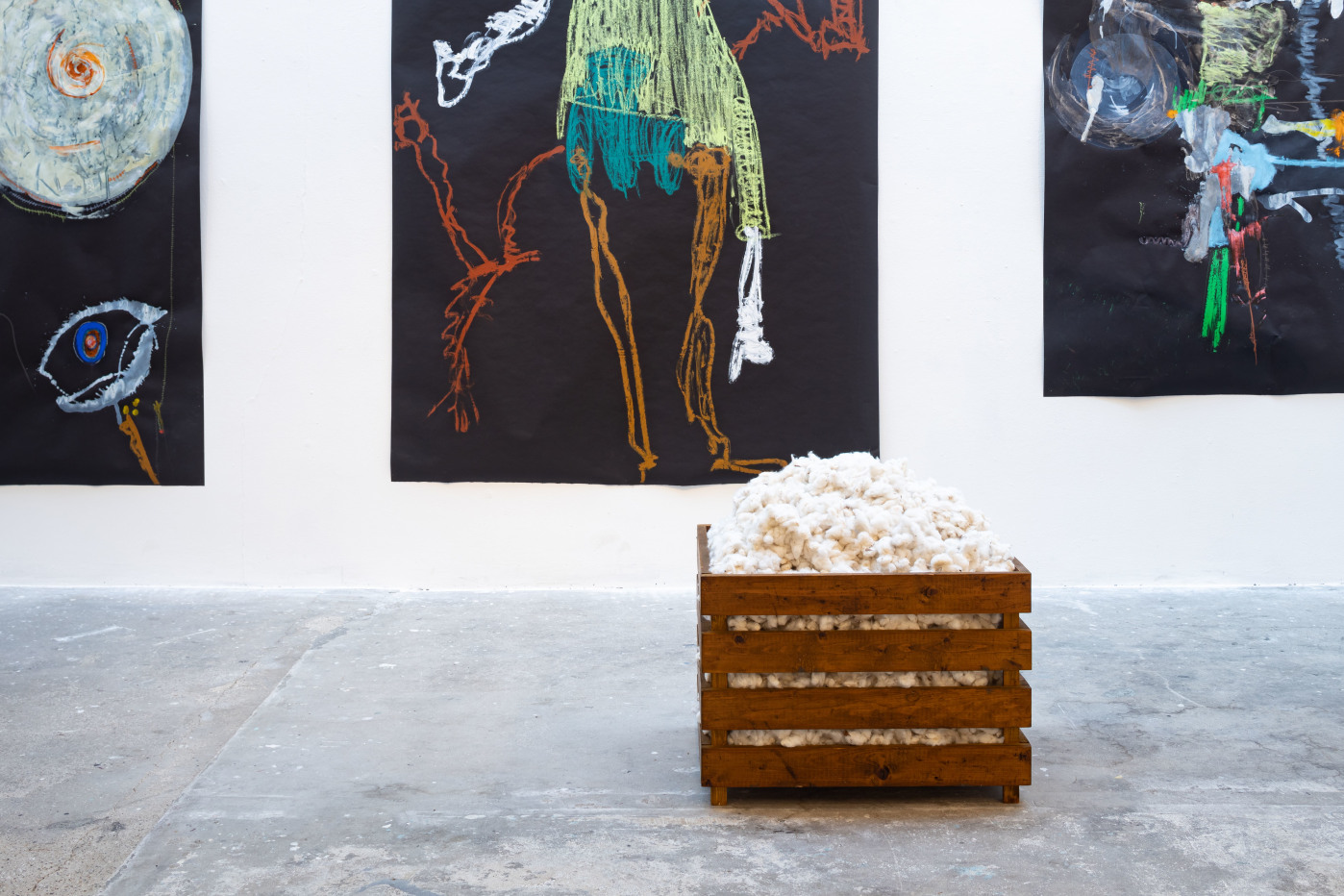