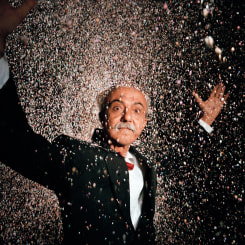 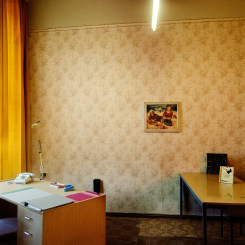 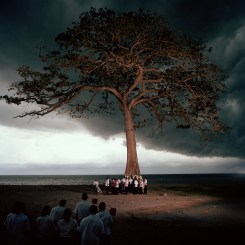 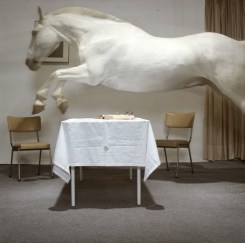 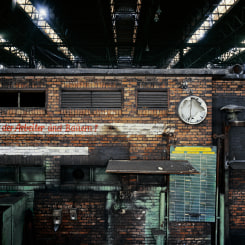 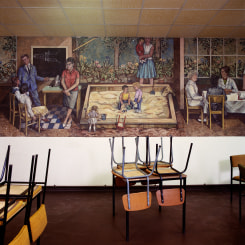 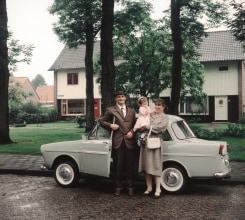 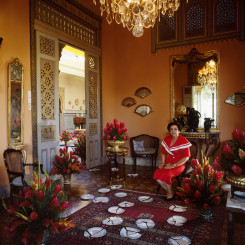 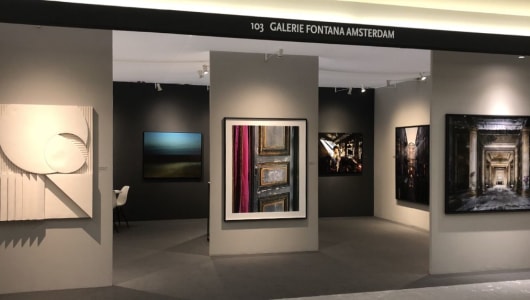 The photographer Hannes Wallrafen (1951) lives since 1972 in Amsterdam. From 1972 he got a photographic training at the Rietveld-Academy (Artschool). From 1976 onwards he travelled the world extensively as a professional documentary photographer for magazines and third-world organizations:

All his work was done in the traditional documentary fashion but next to this work he starts, from 1986 onwards, to arrange his own pictures like a stage director, working with models, a set-design and studio equipment. With this kind of work too he gets a host of assignments from magazines, trade and industry, government institutions and musea.
In 1988 he leaves for the first time to Colombia to start work on his Márquez-project wich he had been preparing for several month's. After his first successfull journey he returns to Colombia in 1990 and finishes the project in 1991.In 1993 his serie was published as a book in the Netherlands, Britain and Colombia. The introduction for his book" The World of Marquez" was written by García Márquez.
As well with his documentary work as his staged projects he got prestigious assignments from the city of Amsterdam (1983) and the Rijksmuseum of Amsterdam (1991+1995). In 1992 he received a scholarship from the Foundation for Visual Arts, Design and Architecture.

In 1995 he got an assignment from the Rijksmuseum of Amsterdam to visualize 'Tableaus Vivants' in the tradition of early social-democraty movement.
In november 1996 he published his second book. "De Dingen" (The Things). It is a serie of still-life photographs in black and white acompanied by poems of the writer Jos van Hest.

In 1997 he visualized the six different sectors of the "SBA Stichting Beeldende Amateurkunst" an institution concerning amateur art.

In 1998 he realized his project "Past Imperfect" in which he captured the feeling of the'50s and'60s in Geldrop. This serie was presented as a book during an exhibition in the NFI National Foto Institute in 1999.

1998 he received an assignment from the Amsterdam Fonds voor de Kunsten. For the secondary school "Pieter Nieuwland" he created four different photo installations.
In 1999 he presented his project "Ode to the Red Family of the Zaanregion". With this subject Hannes Wallrafen received in 1997 a documentary foto assignment from the Province of North Holland.

In 1999 he was asked by the Province of North Holland to participate with different artists in the project 'Fort Lux'.

In 2000 he received from the Amsterdam Fonds voor de Kunsten an assignment to introduce students of a secondary school in Amsterdam Het Huygens College into the digital world. Under his auspices the students created videoclips. Next to that activity he produced in 2001 the digital video 'De Huygens Portretten'.

In 2000 he was asked to develop an idea about the Middle American country Honduras. After his first visit in september 2000 he found the theme for the new project ' Of Time and the Tropics ' . With the financial support of the Foundation for Visual Arts, Design and Architecture, the Mondriaan foundation and the HIVOS Cultural Fund he finished this project during two journeys in 2001. The project was published as a book by KIT publishers and presented during the fotofestival NOORDERLICHT in september 2002.

In 2001 he was asked by the Province of North Holland to participate with different artists in the project 'Van IJ Tot Zee' to celebrate the 125th birthday of the North Sea channel.