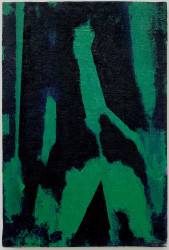 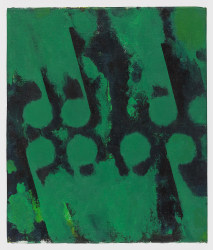 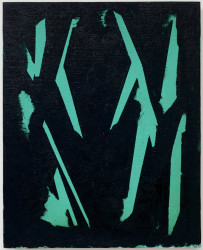 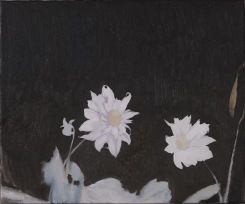 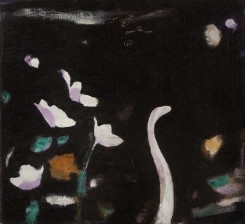 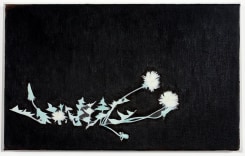 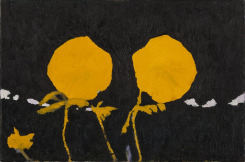 Suspension, isolation, anticipation; frozen moments, ghostly flowers and floodlit nights
Although, amongst other subjects, Glenn Sorensen paints pictures of people, most of his work could be considered as variations on the theme of still life – studies of inanimate objects that, conversely, reflect on the endless nuances of the human condition. All of his cool, pared-back, yet oddly lush images are saturated in a mood of intense and suspended isolation. The men and women Sorensen occasionally portrays seem frozen to the spot, as if overwhelmed by their thoughts or unspoken circumstances – only the children bloom. Studies in anticipation, both people and plants appear to be waiting for something to happen, while the sense of something irrevocably lost tugs like a gentle undercurrent beneath these still surfaces; something – as is the nature of painting – that is frozen in the instant of recognition. Perhaps this accounts for the elegiac quality of Sorensen’s work – all that remains of what has been witnessed or felt are these painterly traces. The Australian-born, Swedish-based artist’s painting Behaviour (2009), for example, ostensibly depicts the artist holding an umbrella. He appears, though, to be in such a deep reverie, and the umbrella untouched by either raindrops or wind, that the picture’s apparent subject is only an indication of another, more remote, level of meaning. The palette is cold: Sorensen’s beard and hair are painted in blues as brittle as ice, the umbrella a chilly pale green; the thickness of his sweater demarcated in geometric stripes. The figure is surrounded by an inky background – less night than a melancholic void. The umbrella, held aloft like a flimsy shield, offers scant protection from whatever might be lurking beyond the picture plane (rain? an argument? life?) – all of which might imply a melodrama, but such a reading would be wrong. Behaviour is as delicate and as urgent as someone holding their breath, its title an indication, perhaps, of the reflection that one’s actions often have repercussions too subtle – and perhaps too isolating – for easy representation. Similarly, The Birthday Party (2007–9) depicts two women, as frail as figurines, lit by an unearthly soft orange glow, standing on a gloomy, pale green ground. Despite its title, the only party here is one of shared isolation. The women are dwarfed by their surroundings – one, looking down, clings to the other. It is an utterly ambiguous, oddly touching, scenario; Sorensen told me that it ‘started out as a loose garden painting about colour and space and ended up as a painting about emotion’. It was, he said, ‘a process of reduction and realization’. Sorensen has long been interested in plants. One of his earliest paintings, Cigarette Plant (1997), was a deadpan study of leaves and cigarettes, inspired by the kind of hallucinations prompted by late-night nicotine cravings. Since then he has made countless moody paintings of flowers, leaves and plants in soft, lush lilacs, deep greens, chalky browns and faded fluorescent blues, their details occasionally dissolving into such gorgeous swathes of abstraction that the only indicator of the subject matter is the title. Exercises in both simplification and illumination, single buds, leaves or tendrils – in gardens or delicate vases – appear either floodlit in a dark garden or melting into near-invisibility suffused by white sunlight. At once vague in detail yet specific in their evocation of gorgeous dissolution, their surfaces shimmer like mirages while hinting at something tougher; they’re like filmic, rapidly fading memories of the harsh, bright light of Sorensen’s Australian childhood, recalled in the midst of a long Swedish winter. Around a decade or so ago, Sorensen made paintings of what appeared to be details of bright lily ponds emerging from the shadows. Like post-industrial Monets, they’re simultaneously grubby and fresh, hovering somewhere between a celebration of the subtle splendours of the natural world and a moody lamentation at its spoiling. More recently, his flower paintings increasingly embody human qualities – in Eye and an Eye (2008) and Days (2008), for example, petals droop and stare like exhausted, elegant humans. Similarly, Tenderness (2008) exemplifies Sorensen’s current concerns. Comprising a flower’s stem, its buds and petals conveyed in degrees of chalky creams, its contours glowing slightly against the black of the background, it’s an intensely quiet study in oppositions: decay and life, darkness and illumination, restraint and excess (no flower is modest). It has an air of spiky, lovely, resignation that somehow hints at spring’s return – after all, it happens every year, even at night. 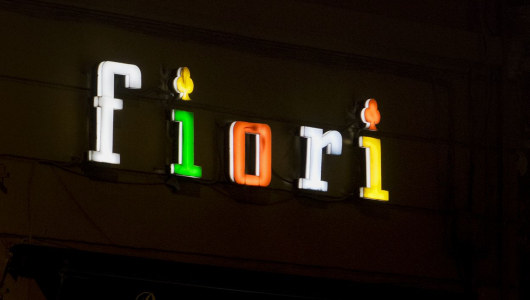 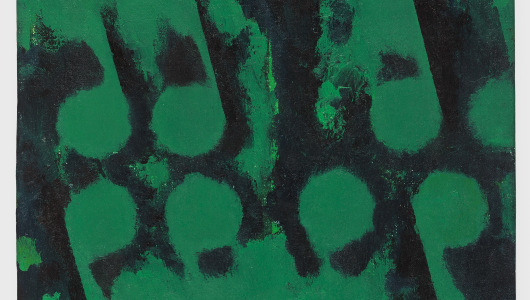 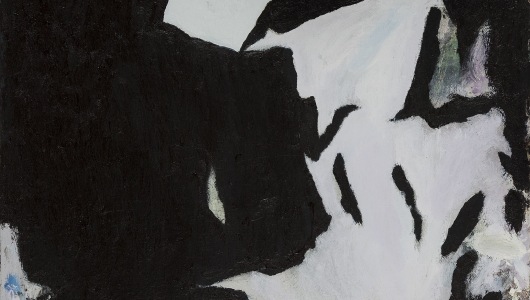