guest
Folklore is at the heart of Nils Alix-Tabeling’s practice as a sculptor, videographer and curator-director, he invokes in his
work characters from the past, mythical creatures, chimeras, or historical figures. His interest in paganism and medieval
fables is embodied through a practice of sculpture and craftsmanship that combines cabinetmaking, jewelery design,
papier-mâché and ikebana. Mutant monsters, the humanoid figures that he sculpts are always hybrids, transpecies,
transgender, erotic and grotesque. They form a Chthonian pantheon of repulsive and desirable beast beings, often
mobilized through dramaturgical activations: operettas, oral tales and rituals. In these performances, actors converse
with these creatures; they express their desires and affections, sing and dance for them. Each new project becomes
the site of a narrative arc invoking « friends from the past », authors or artists, such as Colette, Verlaine, Marcel Aymé,
Mirabeau, alongside deities, witches and striking spirits. This ongoing dialogue between the dead, the living and eternal
beings adresses ceremonial legacies and esoteric beliefs with concern for sexual and ritual consumption: trough
games of mystical ingestions and regurgitations, its agents and protagonists advance from possession to penetration,
ventriloquism to vision. They open trans-temporal spaces where the body is approached as a receptacle for memory,
magical performativities and power.
-Thomas Conchou 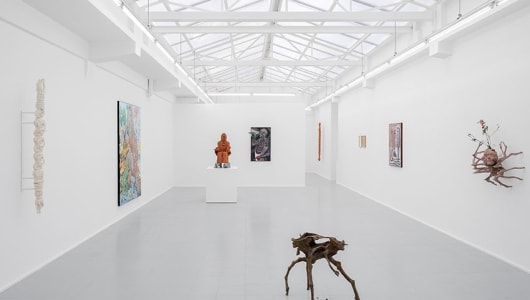