Longread | Against all odds - Betty Tompkins 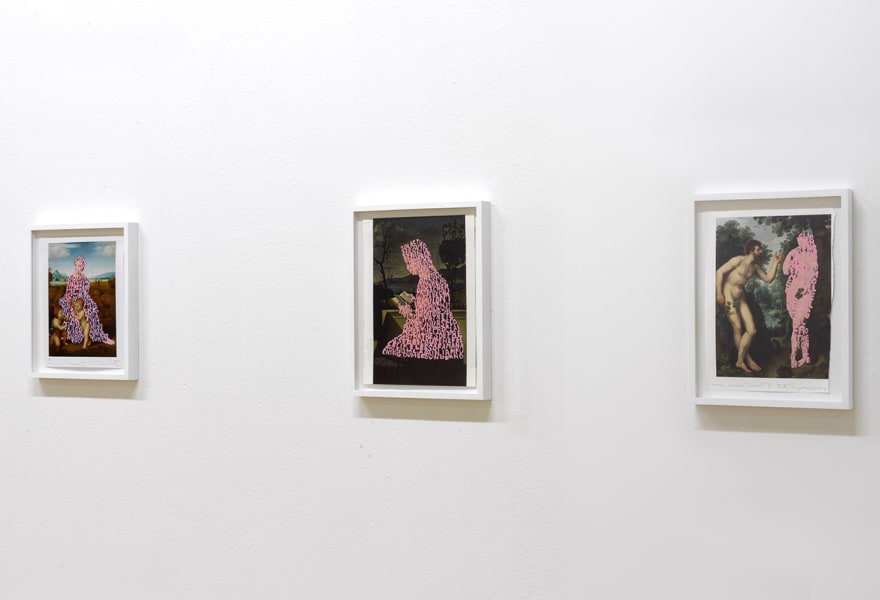 The digital connection between Wayne County PA and Southern Italy is better than expected, so nothing stands in the way of a lengthy conversation with artist Betty Tompkins (born in 1945 in Washington D.C.), whose third solo exhibition at Galerie Rodolphe Janssen (Brussels) opens in September. It is still morning in Philadelphia but in Italy, the sun is already high in the sky and it is around 35 degrees Celsius. The crickets are chirping, but it’s quiet inside and I’m looking forward to my interview with the Grande Dame of the bitch, slut, cunt and other fuck and pussy paintings. From the very start of our conversation, this feisty and articulate lady talks as if we've known each other for years and within five minutes, I find myself hanging onto her every word.

I start by congratulating her on the 'RAW MATERIAL' exhibition that recently opened at the MO.CO. Montpellier Contemporain. It is her first major museum exhibition in France – curated by Nicolas Bourriaud – and showcases more than fifty paintings and drawings from the past ten years. She is visibly pleased and immediately mentions that she is also exhibiting her work at the GAVLAK gallery in Los Angeles entitled ‘Some Sex, Lots of Talking’. Life is definitely smiling on Tompkins and she considers herself lucky.

But first, let’s go back some fifty years.

The year is 1969 and Tompkins has completed her first series of paintings. She calls them Fuck Paintings and they depict blown-up, close-up depictions of explicit sexual acts. The reason for the series was the illegal inventory of pornography belonging to her then husband, artist Don Tompkins, which he imported from Asia in the 1950s and smuggled into the U.S. via Canada. By focusing exclusively on genitals and sexual acts, abstracting them from the bodies of the models and enlarging them, Tompkins shows the female and male body as objects of pleasure. Although the second wave of feminism was sweeping across the U.S. and Europe at the time, her work was not affiliated with or appreciated by either feminists or progressives. Consequently, the Fuck Paintings were not exhibited anywhere and censored for being 'misogynistic' and 'offensive'. 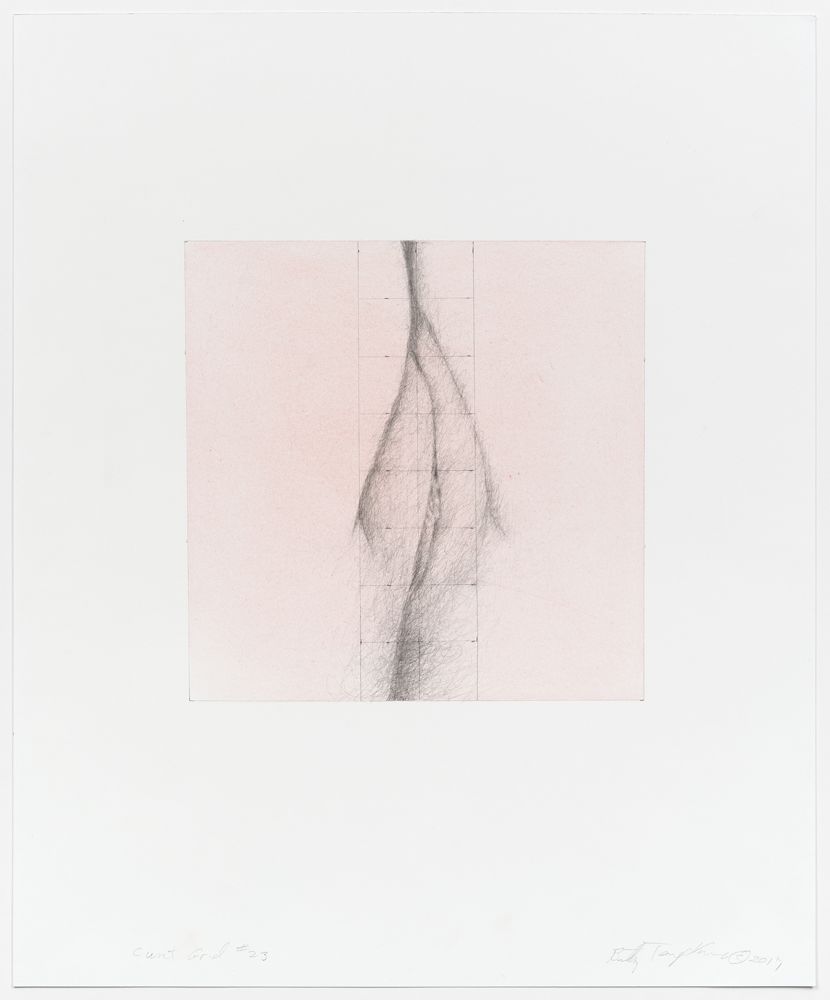 The first word she learned to write was her older sister's name. When she proudly showed the result to her kindergarten teacher – she was only five at the time – her teacher coolly replied, “But that's not your name, is it? I will teach you how to write your own name.” From that moment on, little Betty learned to read and write and words became a substantial part of her life. She was a quick learner, which regularly led to rivalry between her and her older sister, who was clearly bigger and stronger. “Just wait a few years,” her father said, when she complained. And he was right; as soon as she grew taller, the battle was over. But in the meantime, she had learned to be patient and wait for the right moment, and that wisdom would serve her well later in life as an artist.

Saying that Tompkins had to learn to be patient in life is an understatement. “There were quite a few advantages to not being noticed or having my work or me personally taken seriously,” she says, which she can now laugh about. “It meant that I could do and make whatever I wanted. That felt liberating in a way.” We talk about the 60s and 70s, when she was between 15 and 35 years old, a time when the New York art scene was limited to a few streets, a small number of male-owned galleries and a handful of male artists. Tompkins adds, "And as boring as could be! All that Abstract Expressionism!”

Every dealer that I spoke to said, ‘Come back in 10 years when you’ve found your voice,’ because that’s what they were used to—Hoffman and de Kooning, all these Abstract Expressionist guys, they didn’t have their first shows until they were somewhere in their 40s to 50s. Some of the dealers said, ‘And don’t come back then either because we don’t show women.’ It was actually very freeing to me. I had no expectations.

It was an era in which all odds were stacked against her: her age, her gender and the type of art she created. What kept her going was that one ever-recurring question from her father, “Betty, what's going to become of you?” And god forbid she answered something along the lines of ‘get a good job’ or, even worse, 'find a husband and a house, get married and have children'. While this would have been the right answer for most parents with a daughter growing up in the 1950s, it certainly wasn't the case with the Tompkins family. "I come from a poor, far-left family, and when I asked my parents if I could go somewhere because ‘everyone’ was going, that was reason enough for them to make me stay home. Doing something because other people did it was out of the question. We had to think for ourselves and be independent. The argument of wanting to belong or be popular was unacceptable.”

You know it when you have it
- Betty Tompkins

Tompkins, who today is considered one of the pioneers of feminist art, along with such contemporaries as Carolee Schneemann, Yoko Ono, Valie Export, Joan Semmel, Lynda Benglis and Judy Chicago, was ambitious and believed firmly in her work. “The person I need to see and love first is myself” became her motto in life and, with that in mind, she gradually conquered the art world. But it was an uphill battle nonetheless. “When I was in my twenties and showed my portfolio to gallery owners, they replied that I was too young, and when I was in my thirties, they said my work was not suitable for the art market, and when I was in my forties, they said no gallery owner would want to sell work by a female artist.” And indeed. Nobody wanted her ‘sexist’, photo-realistic, close-up images, executed in successive layers of spray paint in different shades of grey, sometimes with controversial texts from the porn industry. This was the heyday of Abstract Expressionism in which there was room for expression, but only that of the white, Western male and above all, not explicitly, committed or worse yet: that of a woman. “In a word: boring,” says Tompkins.

If we can say one thing about this headstrong artist, it is that her work is anything but boring. Perhaps because, as she puts it, she is easily bored, but also because she focuses on her work process and all the technical challenges and decisions this entails. Tompkins comments, “I work on the brink of failure, so failure is a possibility and a probability. It is then up to me to figure out how I can get back on track.” 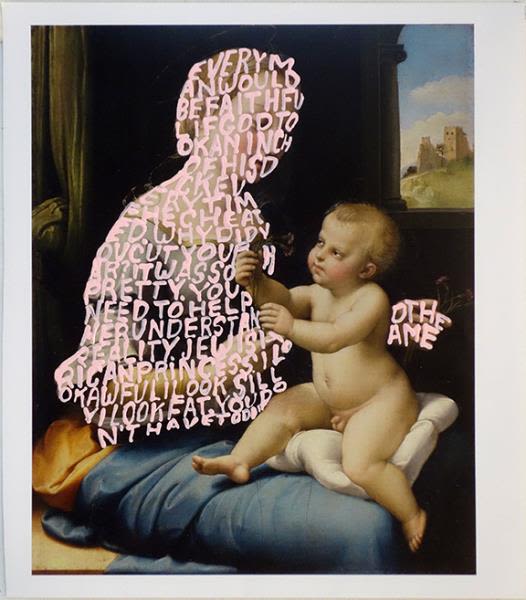 She considers herself fortunate to have an optimistic nature and tireless work ethic. But she is taking it slow for now and does not want to travel for a while. After the opening of the exhibitions in Montpellier and Los Angeles, she’s had enough for a while. She is currently preparing for her solo exhibition at Galerie rodolphe janssen. A selection of her Women Words paintings will be on display at the exhibition. This series is the result of a call-and-response call she posted in which women were invited to email her terms and fragments from ‘me-too’ stories and other usually painful testimonies of power abuse. Tompkins then painted these – in a pretty pink colour – on reproductions of highlights from art history, from classic paintings by Gentileschi, Velasquez, Vermeer and Raphael to Andy Warhol’s portraits and the (fashion) photography of Newton and Avedon – which define the image of women to this very day.

This sense of dialogue with the paintings—of becoming absorbed in their soft forms before resolving them into discernible images that give ‘a subject matter kick,’ as Tompkins describes it, is where their power resides.

Tompkins’s Women Words paintings illustrate the extent to which the current image of women is shaped in accordance with the prevailing – i.e. white, male – morality and the degree to which they testify to a narrowing and restrictive way to address and represent the female gender. By painting these original images with pornographic, misogynistic and sexist terms, Tompkins stresses her interest in the unacceptable, the suppressed and the unseen, in which she believes there is greater truth than in the socially accepted. In my opinion, this is a direct result of her upbringing, which emphasised independence and independent thought – even if it leads to exclusion and loneliness.

I ask her how much the opposition she has encountered in life and fierce criticism to which she has been subjected for decades has influenced her. Tompkins responds, “Anyone can criticise my work, but I will never defend myself against criticism.” She simply does what she has to, as she always has, against all odds.

Finally I want to say that the correct answer to her father's question, “Betty, what's going to become of you?” would have been, “I’m going to be an artist.” And everyone would have thought that an amusing response and would have laughed – except for Betty's father. He would have taken her word for it and have been proud.