A Tribute to the Bloomsbury Group 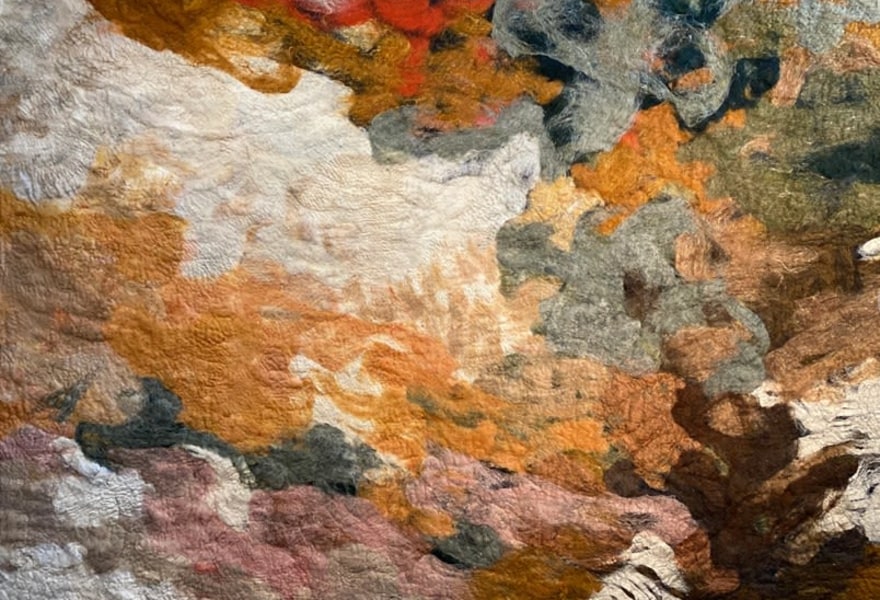 This weekend, Claudy Jongstra's first solo exhibition opens at Galerie Fontana. For A Tribute to the Bloomsbury Group, she made a number of smaller works in addition to one monumental work, each named after the homes of the members of the Bloomsbury Group. The exhibition is a homage and a statement at the same time.

A Tribute to the Bloomsbury Group is the first solo exhibition at Galerie Fontana by Claudy Jongstra (b. 1963). Rather late for an artist whose work already is in the collections of the MoMa and the V&A and in the private collections of stars such as Adele and Brad Pitt. The question that soon arises is: how is it possible that her work has not previously been shown at an internationally operating Amsterdam gallery?

The answer lies partly in Jongstra's background and partly in the particular story about how her career in the US got off to a lightning start, which led to a lot of work there. To start with her background: Claudy Jongstra studied fashion design in Utrecht, then started a fashion label, but discontinued it after a few years because she disliked the volatility of the fashion world. After a visit to the textile museum in Tilburg, she became fascinated by the possibilities of the extremely durable material wool and natural dyes.

She decided to pack her bags and leave for the land of wool, England. While in London, she accidentally bumped into someone who was involved in the production of the three Star Wars prequels, for which she would end up designing the suits of the Jedi. Ever since, she has been commissioned one assignment after the other in the US. Often site-specific works of art of monumental magnitude, such as Fields of Transformation, which she created for the library of the University of Pennsylvania and measures 16 by 6 meters. 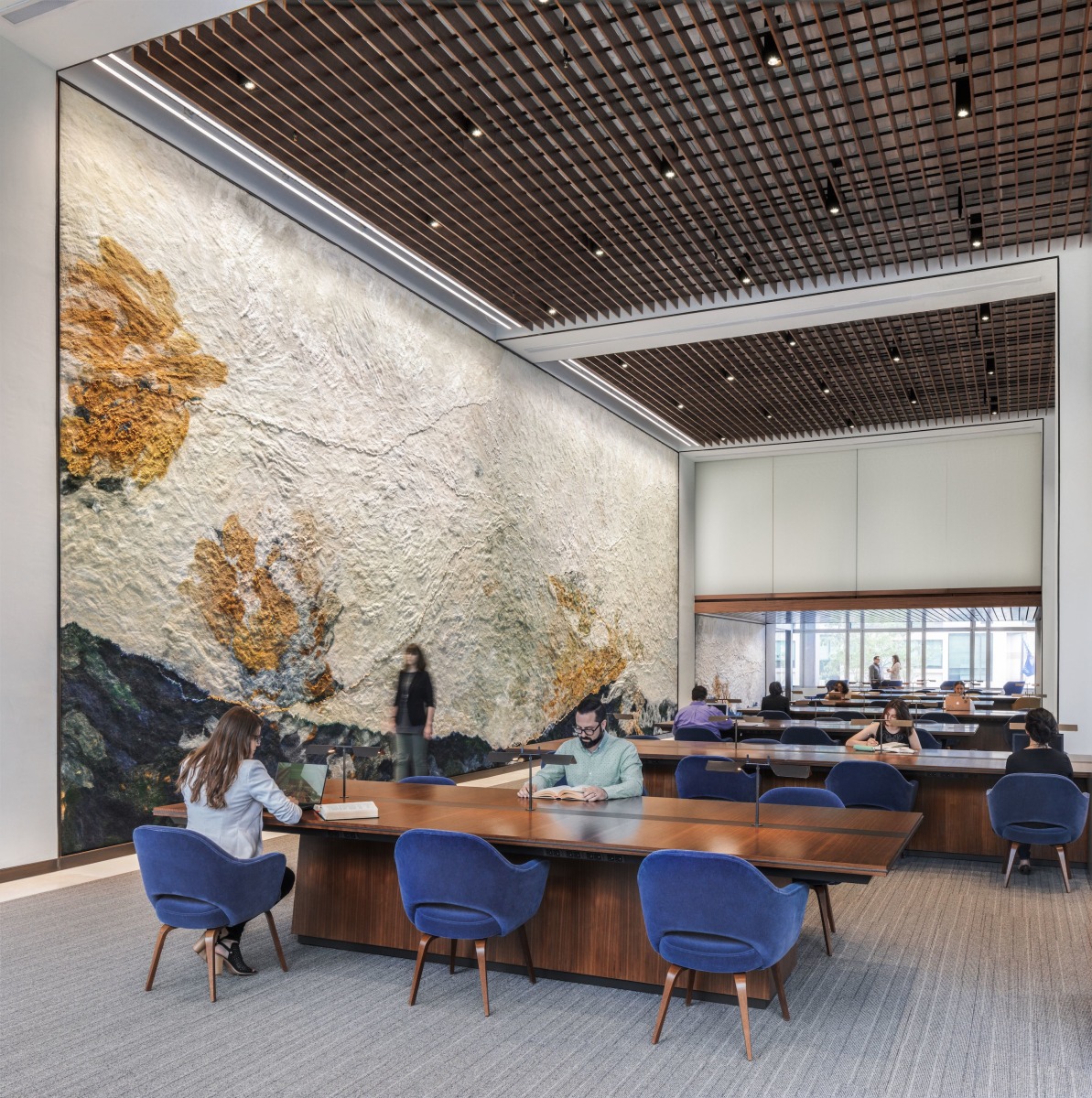 Because of this unconventional career path, she became accustomed to being pigeonholed as the textile designer who worked purely on commission in architecture. Yet, Jongstra wanted nothing more than the freedom of the autonomous artist who works one day on a large installation for a public building and the next on an exhibition of free work. An artist for whom the difference between art and applied art is irrelevant. Hence this tribute to the Bloomsbury Group, which also set this apparent contradiction aside at the beginning of the 20th century.

In fact, the question whether Claudy Jongstra is a designer or an artist or both does not do justice to the rest of her work. Her wool and felt wall sculptures are just the tip of the iceberg of her activities. About twenty years ago she settled in the Frisian village of Húns to start a biodynamic farm. The starting point was to produce her work locally and in a fully circular manner. Not only did she start a botanical garden to produce her own plant-based dyes for dyeing wool, but she also started herding sheep and, in the process, saved the Drenthe Heide sheep from extinction.

As climate change and the flip side of globalization became urgent issues over time, Jongstra's vision on local, circular production and artisanal techniques became increasingly popular. This is also evident from the myriad of collaborations she enters into. For a recent exhibition in Museum de Lakenhal, she and Utrecht University researched what the 15th-century recipe for Burgundian black consisted of. In Amsterdam Southeast and Leeuwarden she has projects that aim to reduce the difference between city and countryside and the Government Architect is also inspired by her in this area. In addition, groups of students and pupils come and go in Húns whom she introduces them to non-industrial techniques.

Bloomsbury
It is not surprising that Claudy Jongstra became fascinated with the Bloomsbury Group when she came across their work during her spell in London. Jongstra's working method and views partly correspond to those of the Bloomsbury Group. In fact, there are many similarities.

The Bloomsbury Group was a group of artists, academics and intellectuals centred around the sisters Virginia Woolf and Vanessa Bell (nee Stephen) and their husband Leonard Woolf and lover Duncan Grant. A loose association of freethinkers that initially gathered in Bloomsbury, London. They lived in squares and loved in triangles, is one of the best-known statements about the group to which economist John Maynard Keynes also belonged. In the 10's and 20's many members left London for a rural life. Their radical ideas would greatly influence feminism, pacifism and economic thinking in the 20th century. 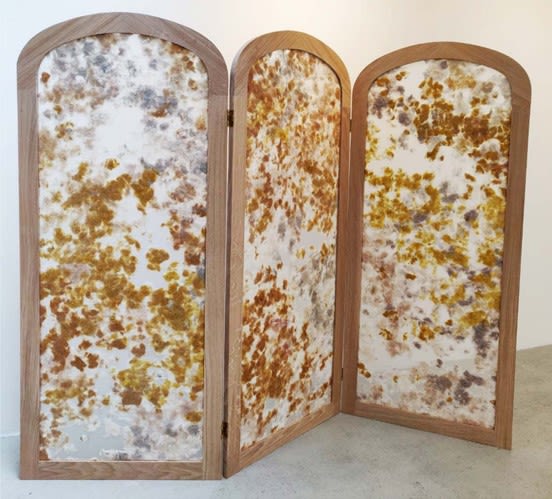 In addition to their work as painters, Bell and Grant ran the Omega Workshops between 1913 and 1919. Disappointed with the quality of industrially manufactured products, they started a company with painter-cum-art critic Roger Fry specializing in the manual production of ceramics, wallpaper and fabrics, among other things. “They had the idea to take the art of the canvas off the frame and bring it into people's homes,” Fry said later. The underlying idea was to let the makers enjoy manufacturing the products as much as possible in order to do away with the difference between art and applied art. Not entirely coincidentally, the work that Jongstra named after the Omega Workshop doubles as a folding screen. 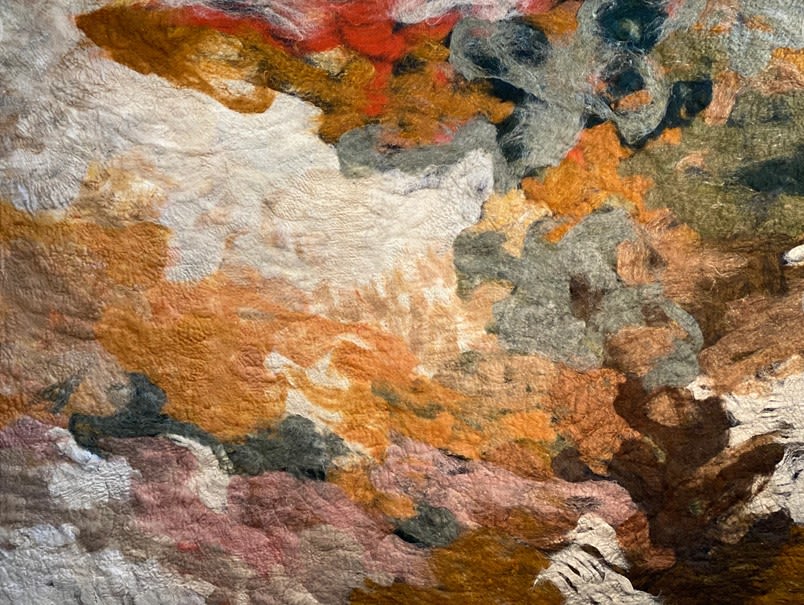 Claudy Jongstra, Charleston Farmhouse, 2021, Galerie Fontana.
The exhibition centres around a wall-sized work named after the Charleston Farmhouse; the house in rural Lewes where Grant and Bell settled in 1916 and where the ideas of the Bloomsbury Group were most strongly executed. The interior of the Farmhouse is a collective work of art with painted walls and beautiful upholstery in which works by Renoir, Picasso and Matisse are blended in. The exterior, the farm grounds, are renowned for the walled gardens designed by Roger Fry.