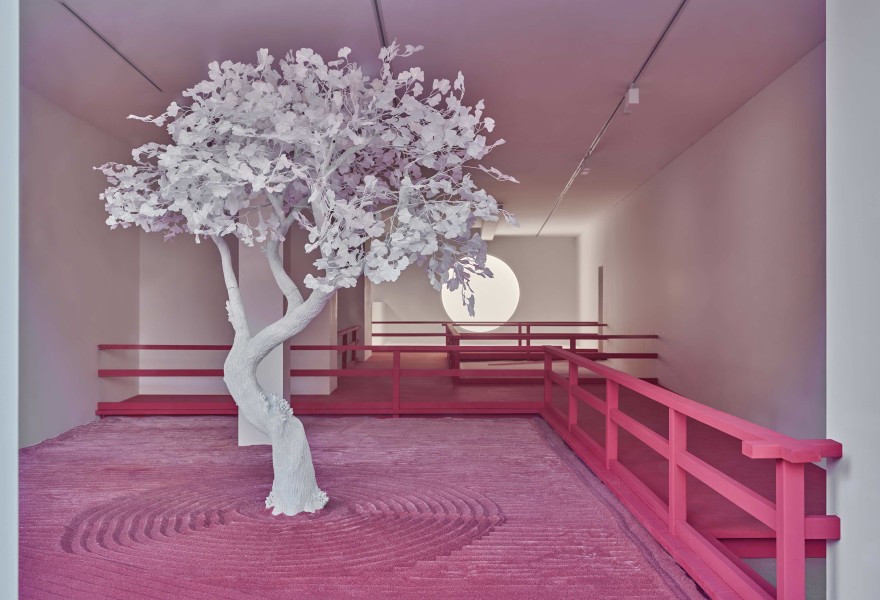 How many artists can say that their edition of 500 copies is sold out within a minute? Not much, but Daniel Arsham succeeded with ease. How this can be done is already clear on arrival. At the entrance you will find an A4 paper which tells you that you can win a copy of the T-shirt that Arsham designed with Filling Pieces by posting photos of the exhibition on social media. Unlike many colleagues, Arsham sees social media as a form of democratization that offers people the opportunity to access and gain knowledge faster. Arsham has 430,000 followers on Instagram.

Arsham feels the spirit of the times, that is clear. But at the same time, time and the preservation of time in the form of artefacts from our pop culture such as utensils, magazines and sport articles are also themes you see in Arsham's work.

When Daniel Arsham (USA, 1980) was twelve, Andrew. In the cellar, Arsham found what you find in storage rooms: he thought he had old appliances, but was no longer in use and kept for an emergency of sentimental reasons. Devices from a different time that he knows why not. Because of the dramatic situation of the approaching natural disaster, the find is a huge impression on Arsham and this form of archeology became the point of his later work.

In the back of Gallery Ron Mandos, a number of works from his Fictional Archeology series can be seen. The series with which he made a name at the beginning of this decade. A classic radio microphone, a reel of a tape recorder, a video 8 camera and a ghetto blaster from the eighties. Each and every one of them is meticulously recreated from hydrostones, volcanic ash and quartz. They could not be distinguished from real, were it not that they were stripped of their paint and seem corroded by time. Even the holes of the oxidation seem real. As if the pieces were found a few centuries later at an archaeological dig and in that future as a museum piece go through life.

In the next two rooms there is room for recent work that also goes back to the personal interest of Arsham. He made a number of covers of magazines that were decisive for him in his youth. Life (addressed to Marcel Duchamp), Sports Illustrated, National Geographic - only these editions do not come from the eighties, but from the year 3018. Especially for this third exhibition at Ron Mandos, Arsham also made a cover of the Dutch Vogue. These works also seem to be half-decayed archaeological finds. This also applies to sports equipment in the same room. For example, crystals from the L.A. Lakers coat are sticking out and crystals have formed in the fossilized basketballs.

Arsham's latest works at first seem to glance to images that are wrapped up and constricted like Christo or Man Ray. However, the images are massive and the way in which the canvases seem to fall over the images, refers to another period, namely Greek antiquity. In the Hellenistic period the so-called wet style was used by sculptors to represent the draped clothes of goddesses. By using this technique, Arsham reveals the status of the images under the canvases. They are Arshams icons of the 20th century: Mickey Mouse, Winnie the Pooh and Big Bird (Pino).

The imposing work Lunar Garden (2017), which covers the entire front space of the gallery, forms a contemplative counterpoint to the volatility of the world of sports and magazines. And unlike with utensils, magazines and sports equipment, there is no question of decay at the Japanese Zen garden. When even just a leaf falls, it will immediately be removed by the monks and the gravel will again be raked, so the garden always looks the same.

Static Mythologies by Daniel Arsham can be seen at Galerie Ron Mandos until 16 March.

See the biography of Daniel Arsham on Gallery Viewer
Static Mythologies by Daniel Arsham can be seen at Galerie Ron Mandos until 16 March.
(See exhibition page and all exhibited artworks)