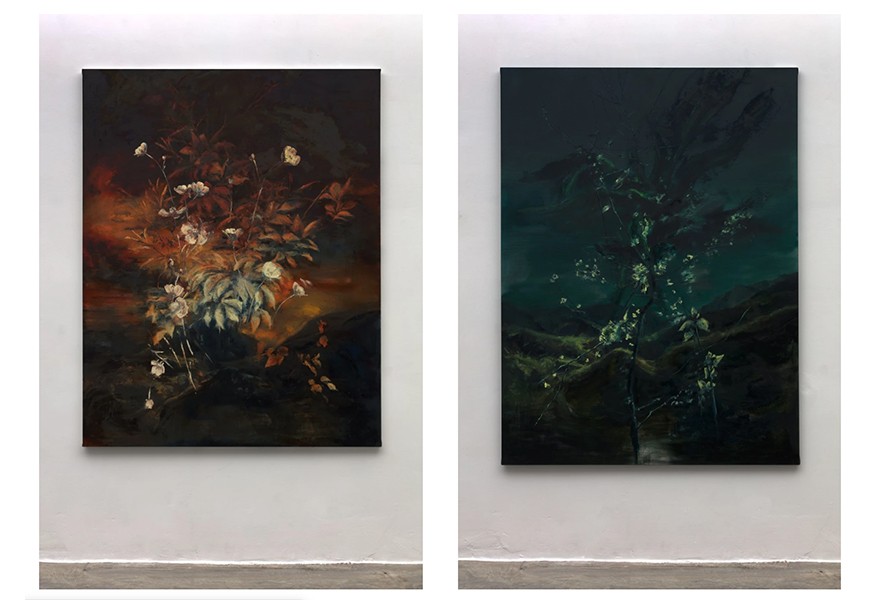 Anyone who talks to Joris Vanpoucke cannot escape the impression that they are dealing with someone who likes to think. Someone who thinks a lot about life, its meaning and his role as a person and as an artist within it. You could say that he uses painting and drawing as a way of expressing himself as a human being. Not in the sense of an individual with all his ups and downs, but as a phenomenon that is part of something much bigger than himself; something that transcends the visible reality and the limits of the individual human being. "Vanpoucke's landscapes are areas of the mind," wrote Menno Vuister. He himself says in this context: "My inner world is my own. I want to depict something more complex than that".

As the conversation progresses, I begin to understand what Joris means by that "more complex". While he makes coffee (real Italian!) I look around. We are on the first floor of his home in Antwerp. On the ground floor he has his office, and on the second floor his studio and storage. Adjacent to the kitchen is a sunny conservatory overlooking a small courtyard. The sound of chirping birds at the back of the house and passing cars at the front alternate. Everywhere I look there are plants standing and hanging, several of which I think I recognize from his drawings and paintings. There are also many art books. From the Flemish Primitives to Luc Tuymans. On the wall hangs a painting by his friend Tom Poelmans: a portrait of Vincent van Gogh.

Trained as an illustrator and graphic artist, Joris has a great deal of knowledge of materials and techniques to simulate reality. Anyone who looks at his drawings will be amazed at the right balance between technique and feeling, which means that the representation, as befits a real work of art, rises above itself. In the drawing process itself he does not go further than thoroughly observing and accurately copying nature: usually a plant or a flower; subjects that are part of our surrounding natural world and that are constantly changing.

There is no concept underlying these drawings. They are simply exercises in the art of looking and the technique of drawing that as such are part of his artistic growth process. You could say that he makes his drawings from a great mental peace. Precisely because they may exist by the grace of themselves, they consist of nothing but the action itself. Just like an exercise in meditation. Unlike the mindfulness meditation we are accustomed to in the West, intended to temporarily calm your mind and give you a feeling of instant happiness. On the contrary. Vanpoucke's drawing can be compared to the meditation from the age-old tradition of Zen Buddhism. A meditation that requires years of practice to reach a higher consciousness simply by sitting with your senses wide open. During that sitting, countless thoughts, memories and emotions automatically arise that stand in the way of the awareness process.

Or so it seems. In reality, it is precisely those obstacles that help the meditation practitioner to sink deeper into the process of awakening: simply by observing them from a greater awareness. Therefore, the Zen monk will not chase away negative thoughts and feelings of powerlessness, nor will he deal with them. He will leave them for what they are so as not to interfere with the pure sensation between himself and the world around him. Vanpoucke actually does the same in his drawing process: he practices looking and translating his observations directly on paper. Without the intervention of interpretations, objectives, or other motives. He wants to limit himself as much as possible to drawing what he sees. No more and no less. By analogy with the meditating monk striving to coincide with his consciousness, Vanpoucke strives to coincide with the act of drawing as an expression of pure observation. 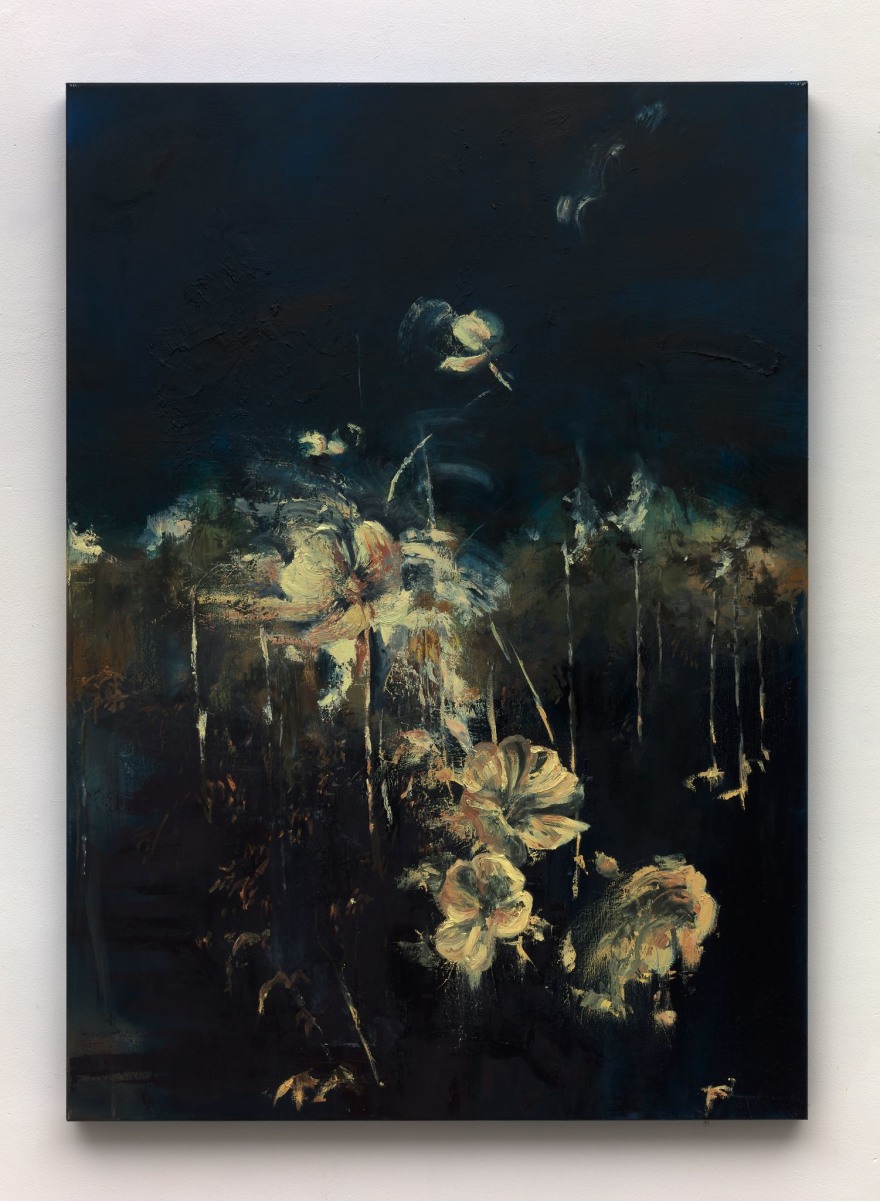 Other principles apply when it comes to painting. Joris gets most of his inspiration from his daily walks around the studio, which he prefers to take at sunrise or sunset because of the special light. At such moments, he can reflect on existential questions that preoccupy him: questions about a meaningful life or about making the right choices. It is precisely these questions that underlie his paintings "that constantly shimmer between day and night, between waking and sleeping, and between dream and the earthly" [Menno Vuister, MK]. Splitting flowers and branches that can express strong feelings of melancholy and nostalgia give his paintings a romantic character. Yet, they never came about with those intentions. On the contrary. What we are looking at are certainly not romantic paintings in the classic sense of the word. After all, they do not refer to the empirical world and the feelings that that world can evoke, but to something much larger and more complex, something so comprehensive that it even transcends concepts such as beauty. 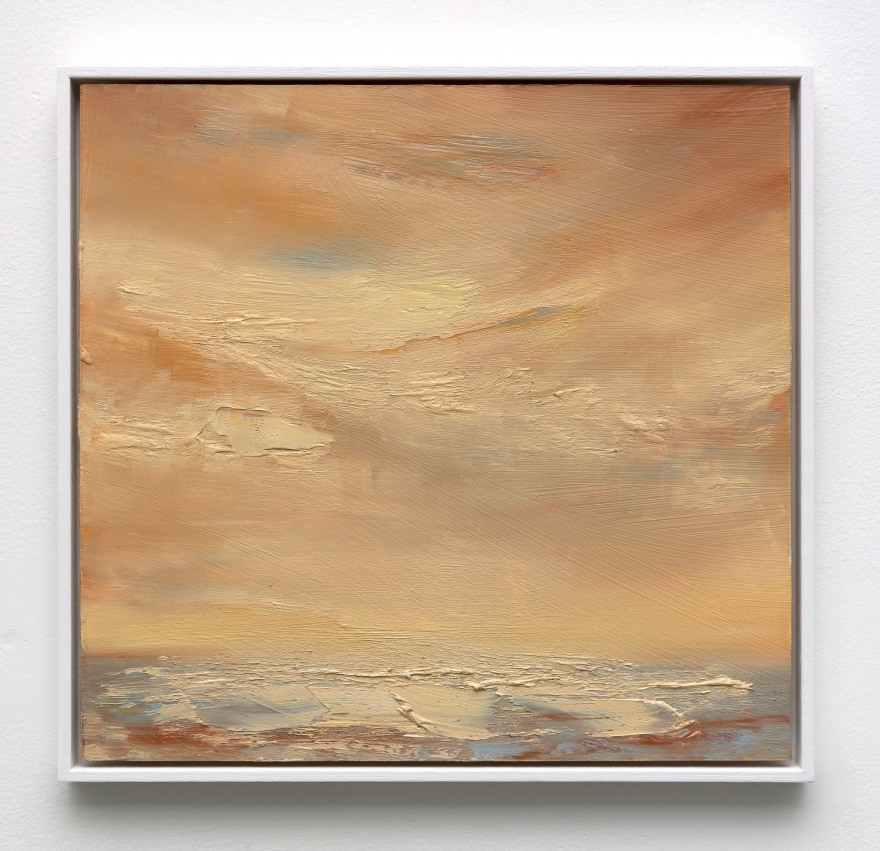 Painting is where the person Joris Vanpoucke comes in. On the canvas he allows himself to create his own world in which his knowledge and technical craftsmanship serve his own imagination. An imagination that defies or nullifies the reality and the feelings it evokes in us. I am thinking of the painting with the bushes behind which the painter has depicted himself almost completely hidden, so barely perceptible. Or the grey mountain landscape that seems to be "destroyed" by an explosion of red flowers. Foreground and background are completely detached from each other in terms of theme, technique, use of colour and the emotions they evoke. The underlying, grey-coloured and unchanging landscape contrasts sharply with the explosion of colour and shapes in the foreground. With an expressive gesture, the painter seems to want to break with what he calls the "anecdote of the landscape": the landscape that only refers to itself. Now the landscape is used to depict something more complex, namely a combination of a representation of reality (the background) and a self-chosen addition (foreground). Vanpoucke adds something to the landscape, creating a more subjective and thus more complex image. In contrast to his drawings, this artist is present here. Not to express itself, but to give the painting more eloquence. When I ask him why he does that on the basis of the sharp contrast between foreground and background, he replies: "I want you to be able to experience my paintings in two ways: by zooming in and zooming out. That's how I pull the world apart."

And that is exactly what Vanpoucke does with his painting: pulling the world apart. It is precisely in this act that the sublime is hidden. Something that is so much more than the sum of its parts. And so much more complex.