Tom Poelmans’ Rite of Spring: A painted ode to love 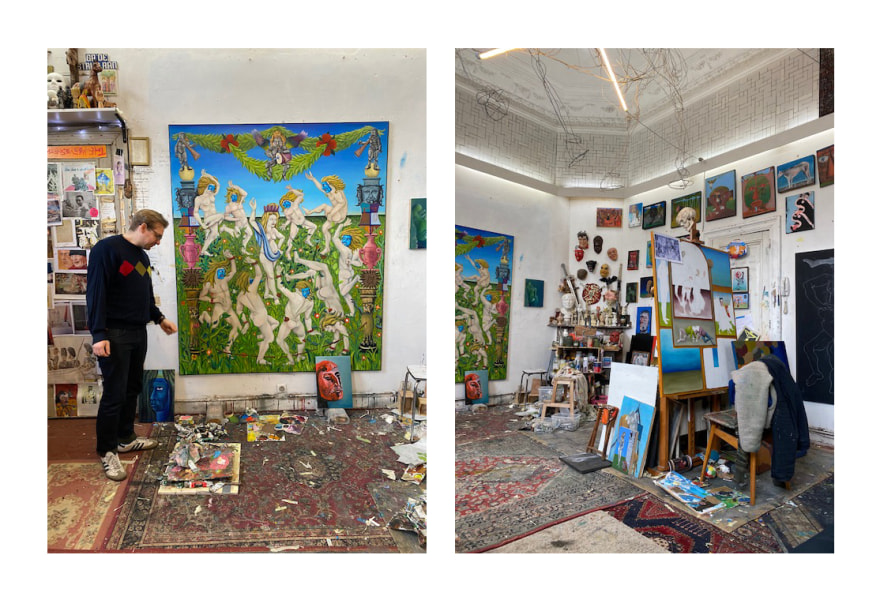 "It is only when you have first bitten into the apple of imagination that you can taste the one called knowledge. If Tom Poelmans’ work matters, it is to remind you of this.”
Simon Delobel

When you enter Poelmans' studio, you imagine yourself in a small museum. A place that keeps the middle between the biotope of a hoarder and that of an artist. Thousands of Walt Disney figures, knights and other knick-knacks are lined up amidst countless paintings and art books from the Early Renaissance and the Flemish Primitives to the Modern masters and Poelmans' artistic contemporaries who, like himself, are struggling with the virus that still haunts. He gets tired of that reality.

He prefers to sit here, in his studio, or at home at the kitchen table, drawing: “As a child I had an enormous imagination. I also didn't want to grow bigger because I didn't want to let go of the play world I created around me. I am quite nostalgic. Every doll and every photo has a memory attached to it. And sooner or later I can use that.” After the academy, the studio became his play world and the canvas his universe in which fact and fiction, symbolism and humour, autobiographical and (art) historical elements coexist. Poelmans’ world feels like a journey through a time when courtly love and knight tournaments had a purifying effect on the nobleman. And playboys and call girls had yet to make their appearance. 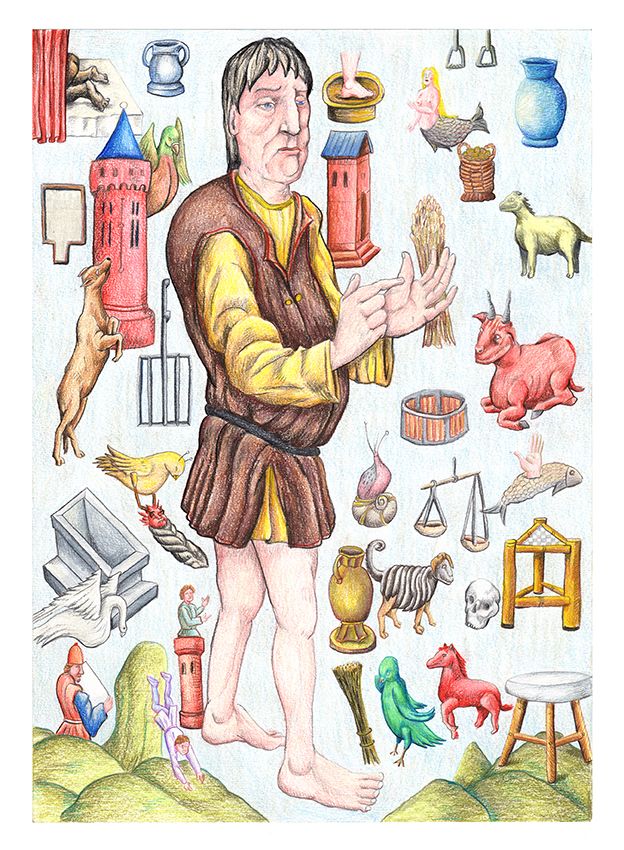 He welcomes me with coffee and fresh croissants and begins to tell about his last visit to Rome where he made multiple daily visits to the Contarelli chapel of the Chiesa San Luigi dei Francesi, which is one of the highlights of Caravaggio's oeuvre, namely the famous scenes from the life of Saint Matthew. His eyes sparkle when he talks about it: “I had the chapel all to myself. Nobody was there. An incredible experience.” 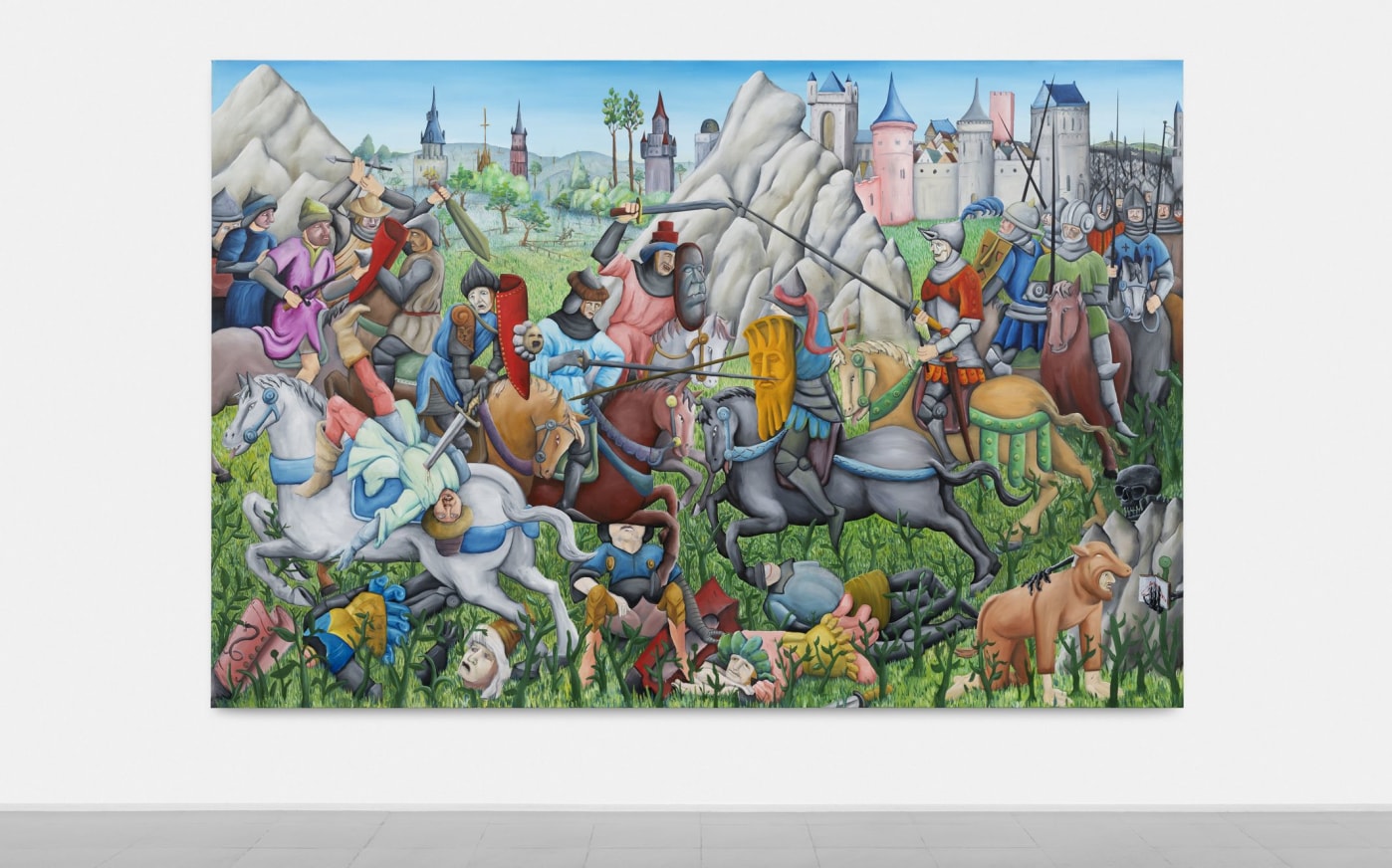 We go back to his first solo exhibition with Rodolphe Janssen, which opened in September 2020 and which he gave the uplifting title "The End of Time", after the first large, figurative painting he ever made, which would premier here. I am looking at a large painting in the making that will be shown at Ballroom in May and could bear the title "The Beginning of Time" because of the performance. Or the "Rite of Spring", after the famous piece of music by the Russian composer Igor Stravinsky with the subtitle: "Pictures of Pagan Russia in Two Parts".

A piece of music that Stravinsky had originally written for a dance performance by choreographer Sergei Diaghilev in which various primitive rituals announce the arrival of spring and a young girl is sacrificed.

Tom Poelmans in his studio.

In Poelmans’ painting we see a young woman surrounded by - mostly - masked men. She is not being sacrificed, but hailed instead. Here spring announces itself as a crowned young woman; like a queen. The artist says that he is in love and that he incorporated the date on which he proposed to marry his great love in the painting.

“What I'm looking at is your personal 'Rite of Spring'; a tribute to your wife-to-be whom you praise on this canvas as only a lover can. The woman as the centre of the painting and turning point in your life.” He smiles a bit shyly but he can't deny it. Here indeed hangs a painted "Rite of Spring" of his most personal queen.

While "The End of Time" seems like nothing more than a bad dream, the "Beginning of Time" is a painting rife with lust and desire. Not a knight fight but a mating dance in which the man appears to the woman in different guises (an interesting fact that must be investigated again in a different context). The painting is extremely structured and Poelmans’ brushstrokes are firm and refined at the same time. The dynamics and zest for life it radiates is clearly related to the theme and the use of colour of the performance. 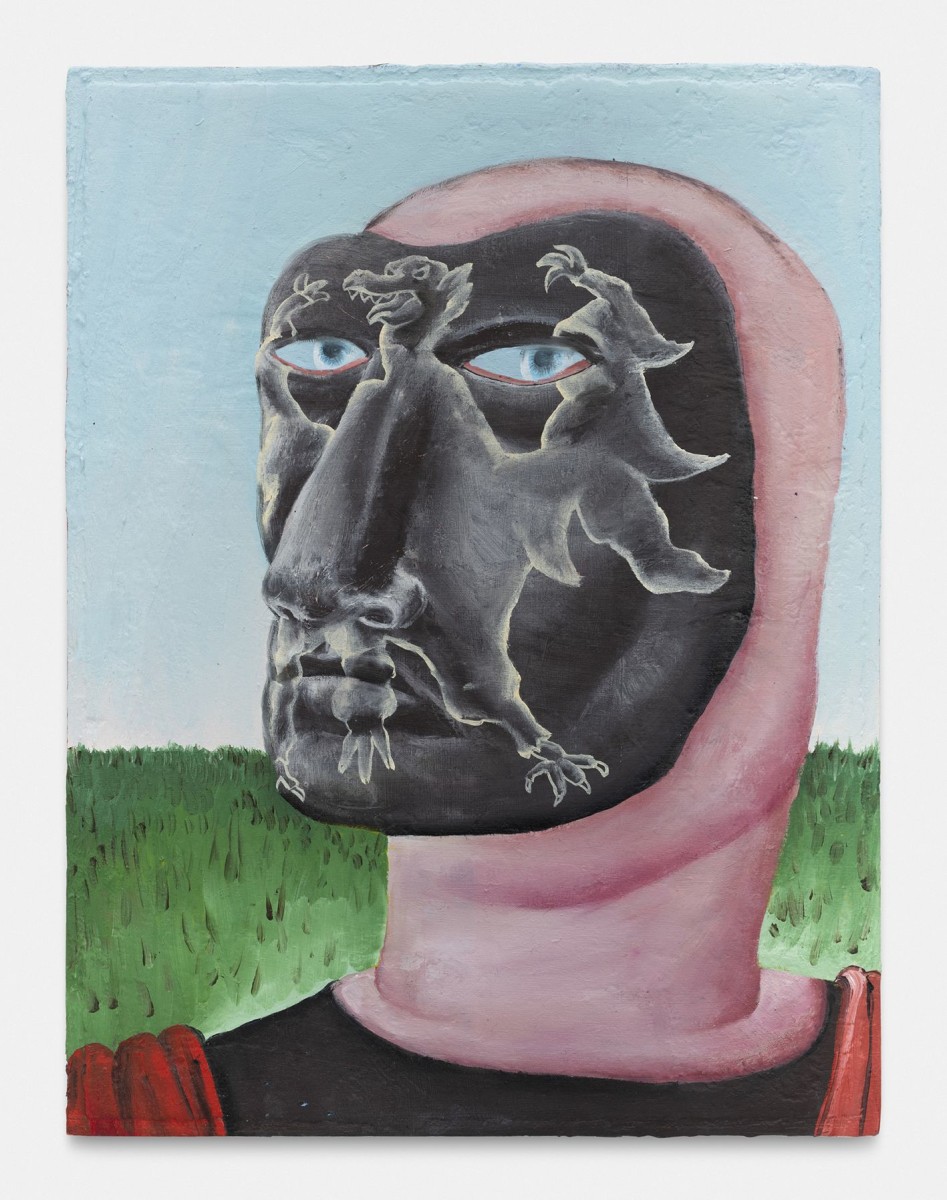 Poelmans knows better than anyone how to apply medieval miniature painting on a large scale without losing meaning and richness in details. On the contrary, by adding contemporary and autobiographical elements, he illuminates the often pious and courtly themes. Due to the many references to the Early Renaissance, when drawing in perspective was still in its infancy and anatomical laws were deliberately ignored for the sake of the representation, Poelmans allows himself a number of artistic freedoms that give his canvases a kind of naive lust.

He works on it for months on end, until the drawing of the scene starts to pinch and he prefers to start working on a small portrait: “I make large paintings from a predetermined structure and a pre-established use of colour and stick to that. That is a very time-consuming process, which mainly goes on in my head and starts from a certain discipline. As time goes on, I begin to long for small-format painting. These works arise from a gut feeling. That is why they are much more intuitive and made with thicker paint. Apparently, I need both methods to feel like a full painter. I like to make things difficult for myself.”
But for the moment he is in love and his courtly mistress soon becomes his legal wife.