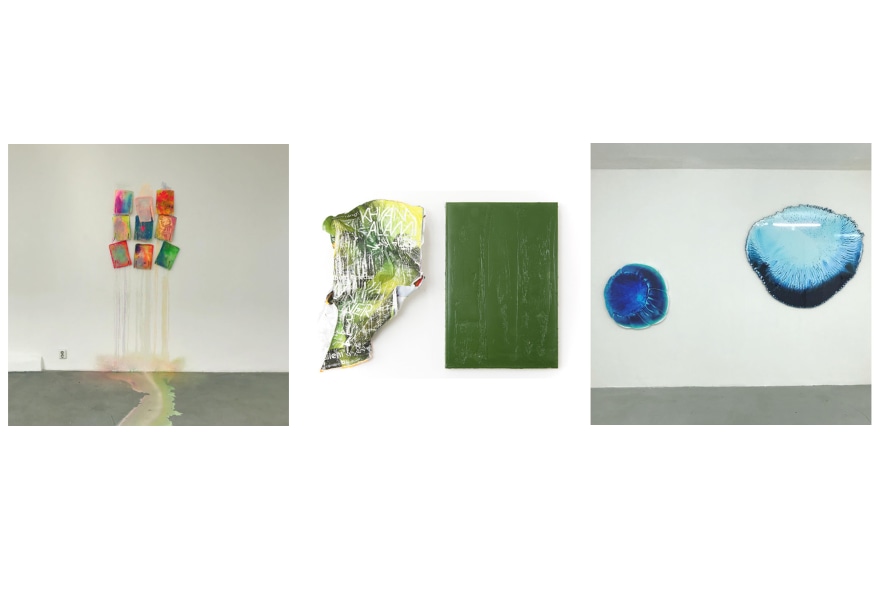 Until 22 August, Frank Taal Gallery in Rotterdam is presenting the exhibition (UN)CERTAINTY, featuring work by fourteen artists. These artists have all experienced recent events in their own way: living in various places all over the world like Rio de Janeiro, New York, a mountainous area near Tokyo, LA, Berlin, Belgium and the Netherlands. In this article, three artists from this exhibition are highlighted because they stand out in terms of their artistic processes and techniques. 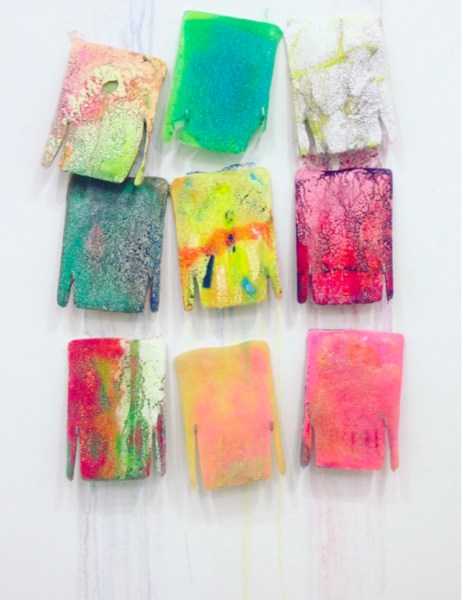 The ‘Icepainting’ series by Daan den Houter is perhaps the most notable piece in the exhibition. His work often turns out to be surprising and exciting. In 2017, he presented two wigs and mustaches that were made out of his own long locks. A self-portrait and at the same time a kind of parody of his iconic look as an artist. In 2018, he made a work consisting of seventeen signed concrete blocks. One of these blocks contains 10,000 euros, but opening the work is prohibited on pain of legal prosecution. Den Houter: “So you buy a dream of potentially ten thousand euros, a dream that feels very close, but never actually comes true, because breaking the object is not allowed since a work of art is protected by copyright, even after your purchase. It’s very annoying actually. Moreover, it is a collective dream because it only works when other buyers are involved. If one person takes the money out, he also effectively break the work [and inherent promise] for the 16 other owners, who can then consider him liable, which will cost him much more money in the end.” For another exhibition, Den Houter presented a paper shredder in a project in which he challenged children to throw in their newly made drawings. For ‘An apple for a rainy day’, Den Houter used mortar to bricklayer 1000 euros in the walls of Frank Taal Gallery. During the opening of the current exhibition, he hung a series of Icepaintings, which are made in the freezer and literally consist of frozen paint. As soon as you take them out of the freezer and hang them on the will, you will slowly see the work melt into a dripping trace of colour on the wall and floor. You are in fact buying an exclusive one-off experience. Den Houter: “If you hang them, you can watch them defrost for four hours, or eight, depending on the size. Such a painting changes continuously, and after that it is gone. The first time you see it will immediately be the last time. I always compare it to a sunset. It's really beautiful and changes constantly until it gets dark and it's over.” You see the transformation taking place in front of you, a transformation in which the painting visibly turns into a memory. You can hear the paint dripping, making the whole experience even more similar to a performance. Because the work was made using different techniques and consists of different layers of paint with different viscosities (thickness and ‘tackiness’), Den Houter is able to influence the melting process. It is an experience that you can share as a buyer or experience on your own. 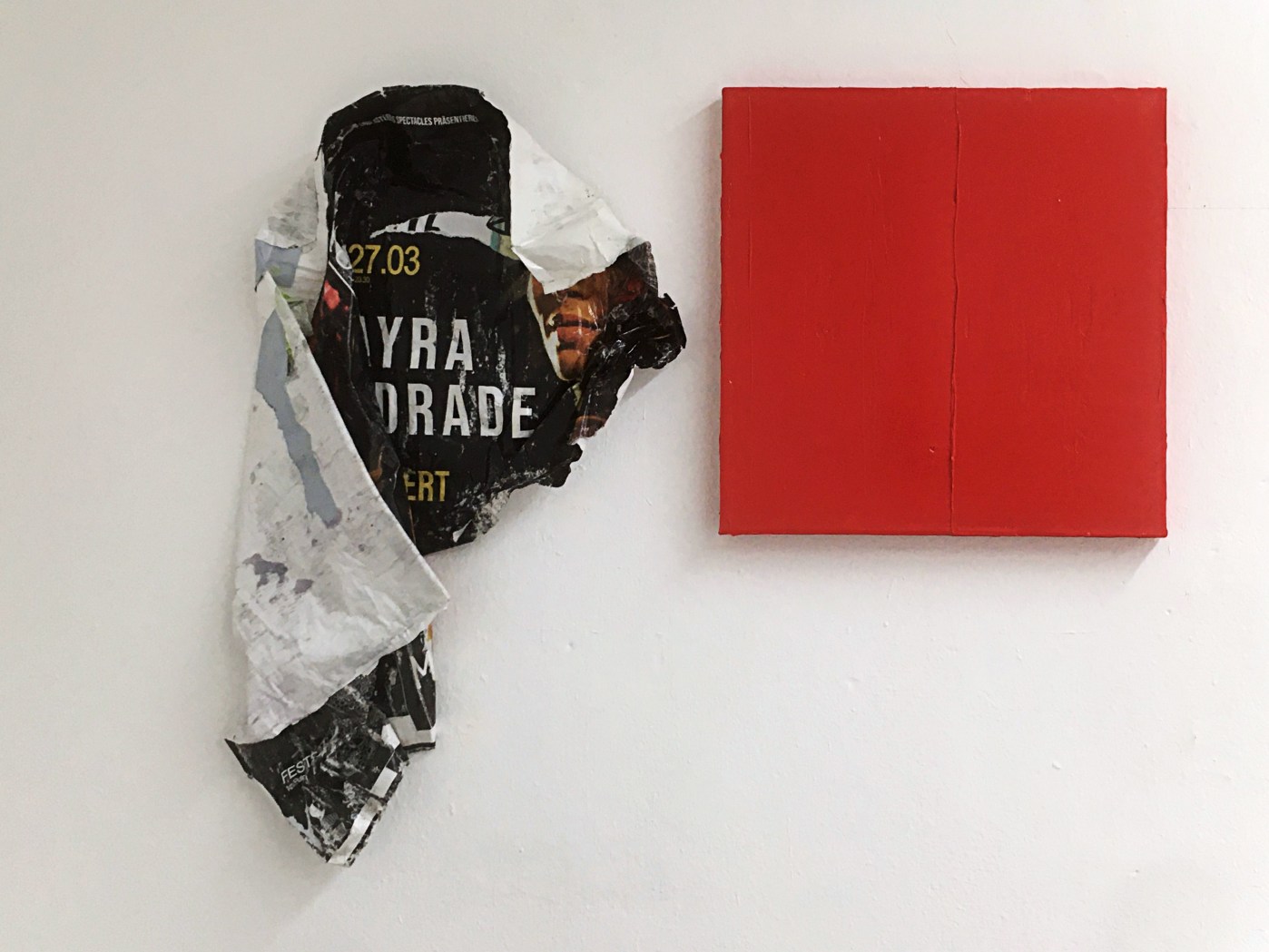 Ties ten Bosch also opts for unconventional art objects. He previously made a confetti bomb from bound paint cans and created art from patient files that he found in the streets. In 2011, his improvised bedroom was featured in the "Housewarming" project in WEI in the old Stadslab in Eindhoven. He also recycled recycled coffee cups into specially made paper which he then frames. In this exhibition, he shows a new series of works that he made in isolation in Berlin, based on a phenomenon that struck him on the street. Ten Bosch: “It was as if the ‘skin’ of the city started to get older and worn out. Due to the clubs, concert halls, theaters, and other venues being closed, no new events were being organized. Therefore no new posters were produced and glued on the many poster spots in the city. The existing posters started to decay, they become wrinkled, started to fade, and partly came off the wall due to the weather. I collected many of those posters and used them as my starting point for new works, in which I focused on the new abstract forms and colors that were present. By combining the found material with a monochrome painting I give new life to the existing object. I try to steer the eye of the viewer and influence the way of observing something that normally would be unnoticed and unvalued.” 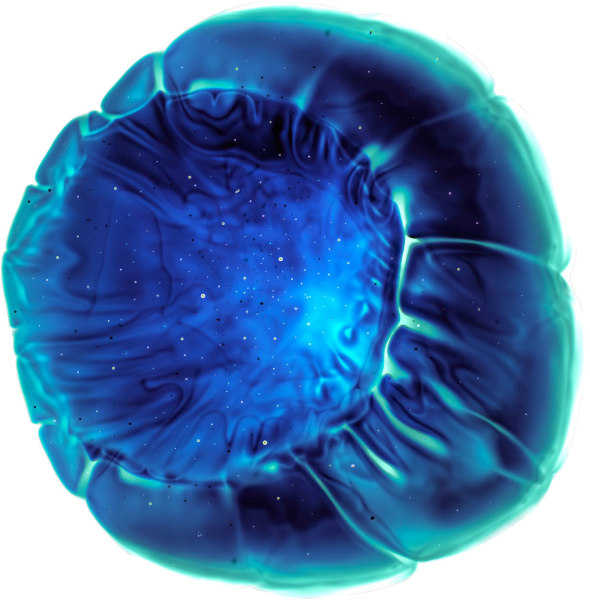 German artist Wolfgang Ganter, who lives in Berlin as well, uses the natural sciences in an incredible way: he makes art with the help of bacteria. Ganter uses a series of bacterial cultures that he releases on photographic film, such as (damaged) slides and colour negatives, often in combination with dyes or added chemicals. The bacteria influence the surface of the film while they feed on the gelatin layer. This way, new colours become visible on the surface. The used images are, for example, photos or slides of world-famous paintings: Ganter received special permission from museums like the Louvre to photograph and use well-known works. During his process, some elements are controlled in the most bizarre detail, while Ganter also leaves room for unintentional and beautiful coincidences. He subsequently captures the (dried) end result in up to 2000 photos that he aligns after that. For his projects, Ganter also worked with students from the School for Molecular and Theoretical Biology in Barcelona and the Gulbenkian Science Institute in Lisbon. For the ‘Micropaintings’ series, he uses small glass plates that were no wider than 5 by 5 centimeters. He initiates various chemical reactions which are then magnified under the microscope and digitally recorded. The prints are fixed on a fiberglass mount and cut along the contours of the chemicals formed on the small glass slides. As a final part of the process, the photo is sealed in clear cast resin.

The exhibition (UN)CERTAINTY exhibition will be on show until August 22 in the Frank Taal Gallery in Rotterdam.
In dit artikel