The mind palace of Louisa Gagliardi 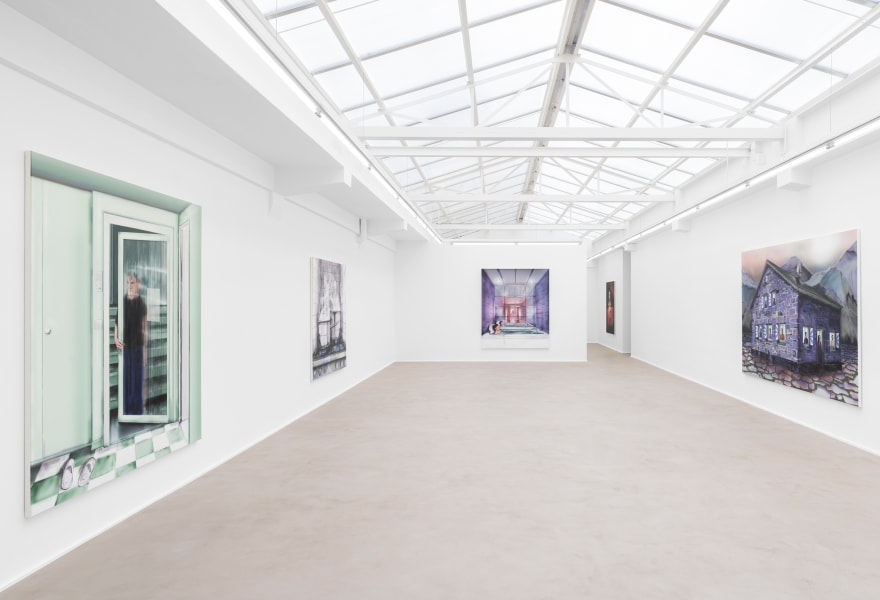 Until 22 October, rodolphe janssen in Brussels is showing a solo exhibition by the Swiss artist Louisa Gagliardi. In 'Around the clock' she builds on the concept of the mind palace, a series of mental techniques that have been in use for millennia in order to be able to remember long speeches or plays — for example by historical figures such as Cicero.

Part of this mind palace, or memory palace, is the loci system, in which information is stored in imaginary rooms in order to be able to activate it at a later time. A prosaic example could be a shopping list that you remember by visualising the route through the supermarket in detail, while actively reflecting on each individual product in its specific location. By converting information into mental images, it obtains new life, in the form of tangible and less tangible images on your retina. If you apply this technique of the mind palace in your own home, it creates a labyrinth of objects that you have mentally placed there, combined with memories. A friend sharing bad news in the doorway. The dining table where you've been discussing your day every evening for years. 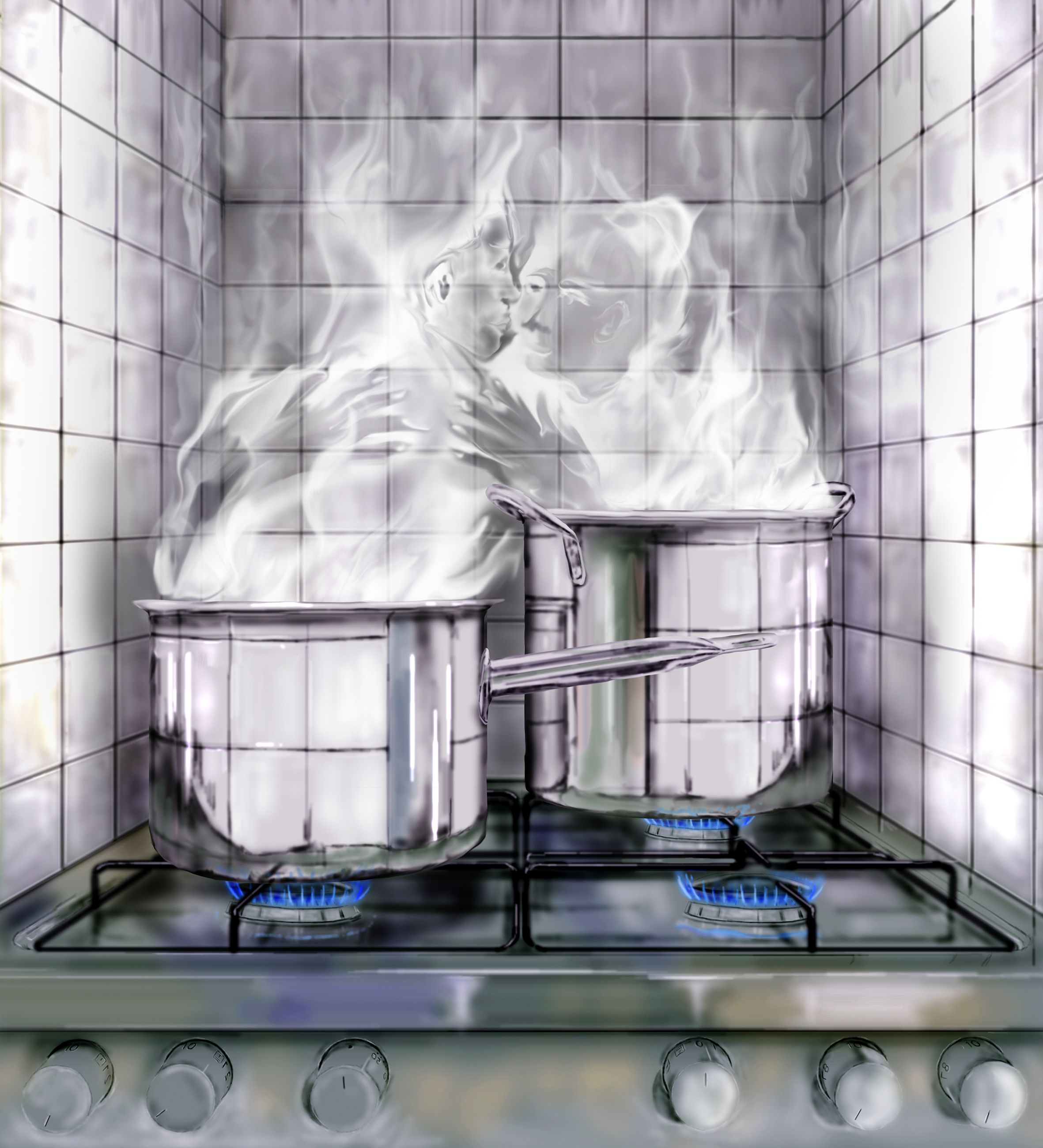 Gagliardi builds a similar house, an immaterial construction of the conscious and subconscious, filled with her lived experiences and cinematic, occasionally threatening and chaotic tableaus. The works are marked by a multitude of reflective surfaces that rarely reflect reality. Fact and fiction intertwine effortlessly and as a viewer you wonder whether you are looking at the memories or the imagination of the artist. On the one hand you feel like a voyeur, but at the same time you'll think about your own mind palace. 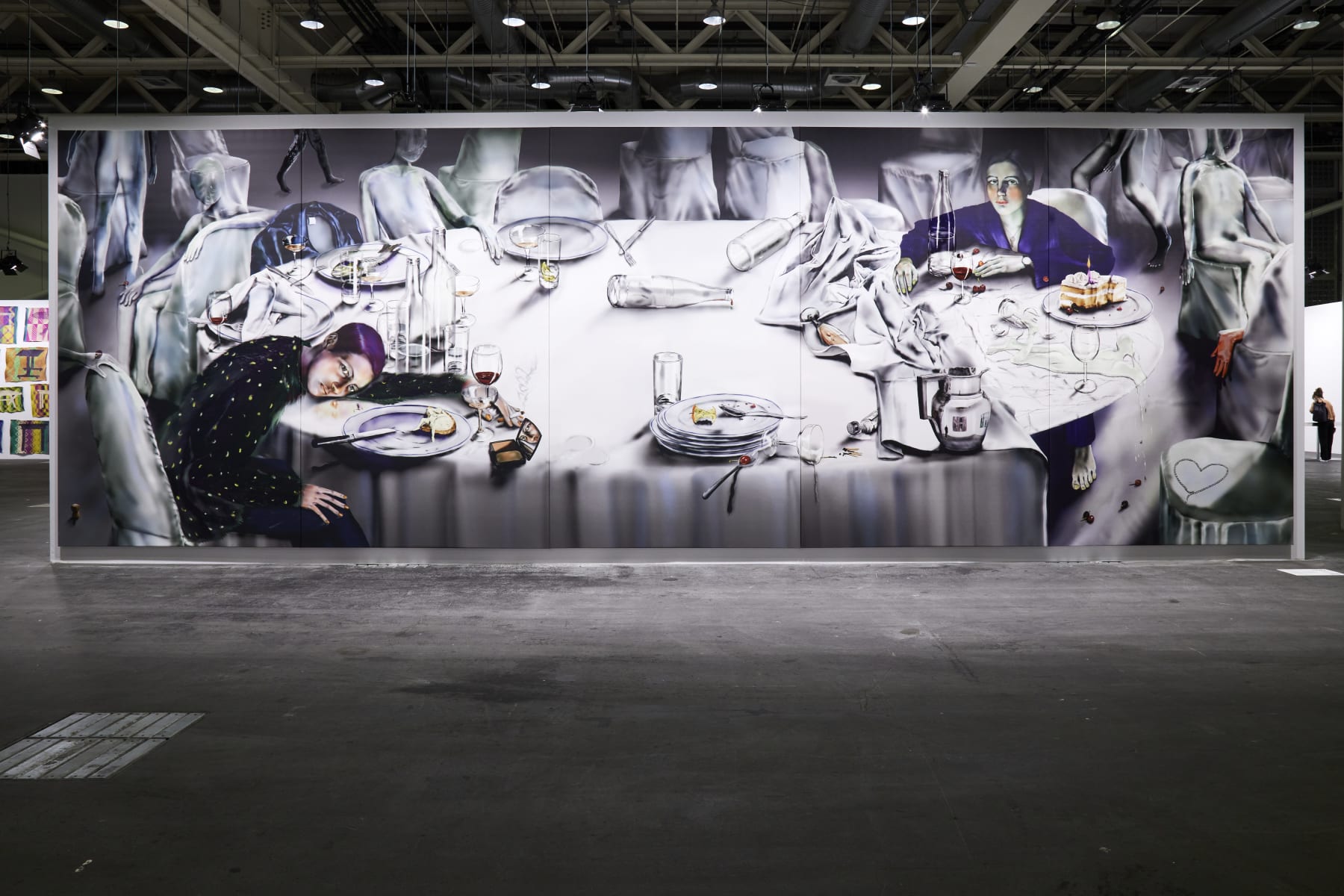 Earlier this year, the Swiss artist presented a large-scale work in the prestigious Unlimited section of Art Basel, which she created especially for the occasion. In Tête-à-Tête (11 x 3.7 metres) we see two women leaning on a round table so large that the existential scene seems to be taking place at a wedding. The whole thing looks chaotic, the people are drunk and isolated, the glasses have fallen over, the plates are empty and stacked in an untidy way. If you stand closer, you see elements that are not quite right: a naked body on a half-eaten sandwich, the memory of a face in the wine, ghostly apparitions, the reflection of a gallery wall in a silver jug. Is this a reflection of the gallery space in which we might view this painting? The artist describes her work as the thing you see when you open a random door, places that might look peaceful or where something has just happened — or is about to happen. 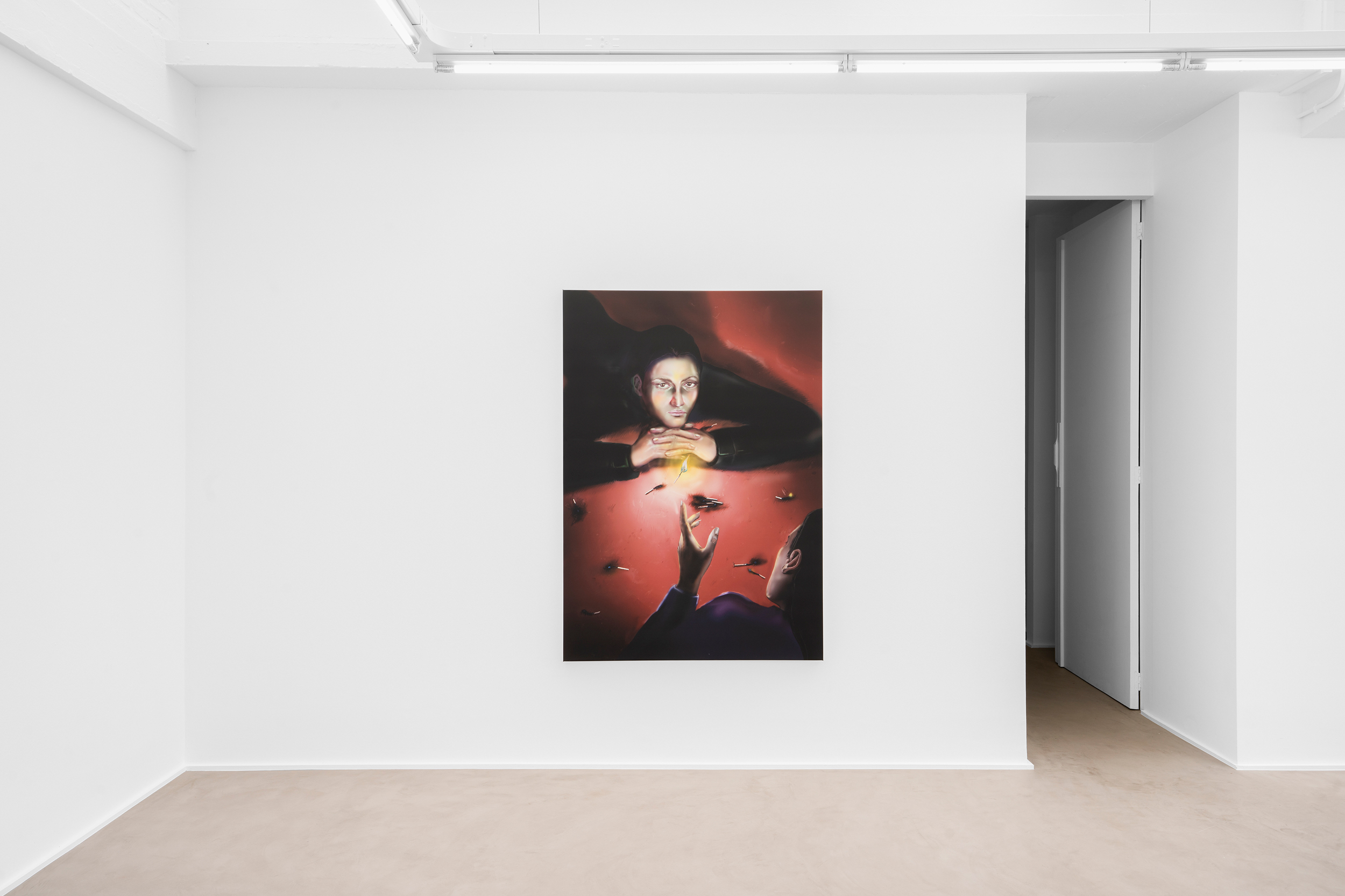 rodolphe janssen presents a series of large works by the artist that are as mysterious as they are surreal. A woman in a bath who doesn't look directly into the mirror, but is nevertheless gazed at by her reflection. Two shadowy characters kissing in the steam of two pans on the fire. Two people in a tent of sorts, having a conversation in the light of a floating, burning match.

Gagliardi begins her process by making sketches which she then scans onto her computer. She uses the trackpad as a brush to make precise edits in Photoshop, carefully creating alternate realities. She prints her works on PVC, which she then reworks with materials such as ink, nail polish and a milky gel, ensuring that the end result visually references the artificiality of the computer screen from which the imagination has sprung — and the ubiquity of technology in our everyday life. Visually, the works refer to compositions from art history and visual codes from painting. 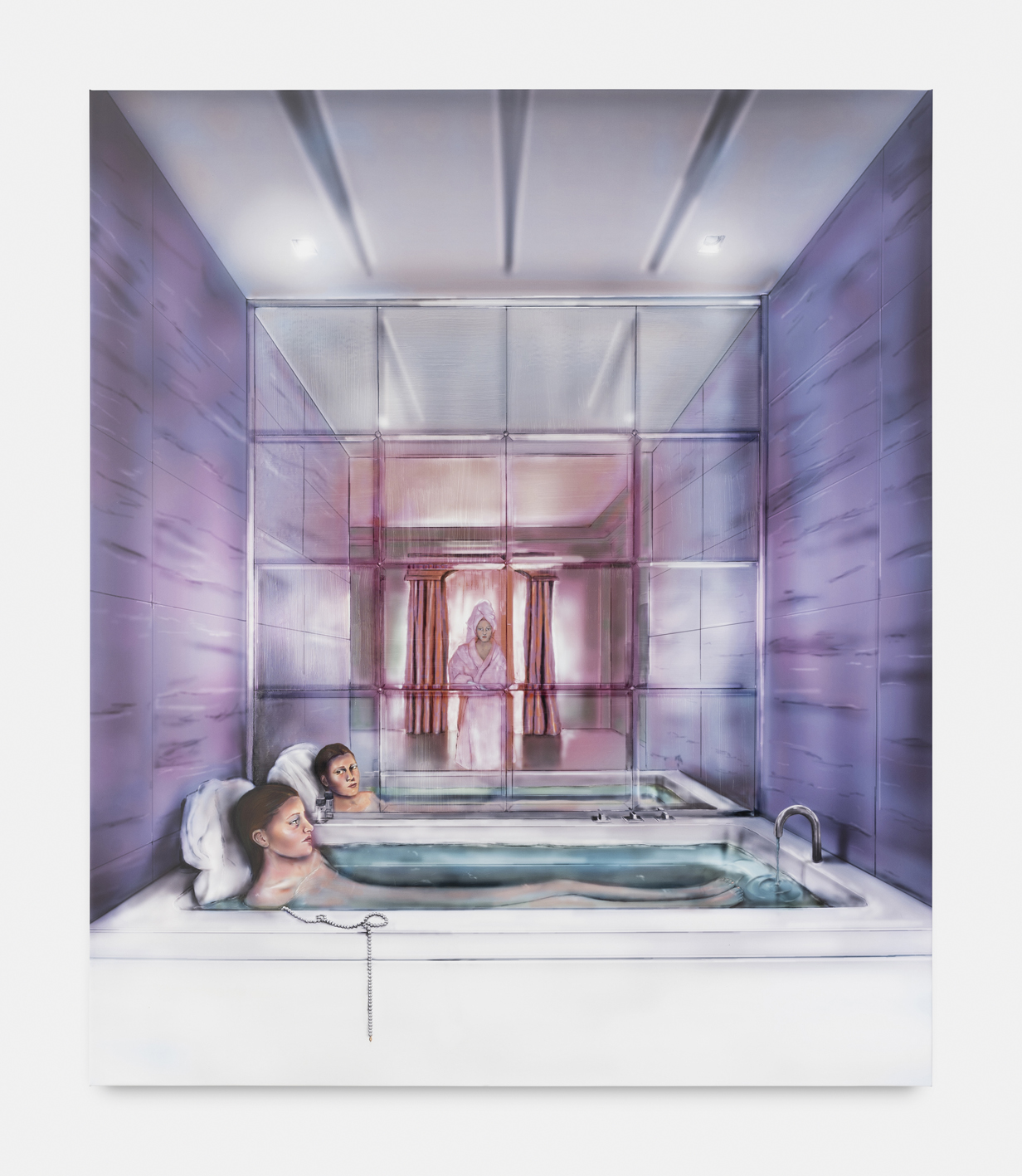 Gagliardi studied graphic design at L'école Cantonale d'Art de Lausanne (ECAL), followed by a degree at the Gerrit Rietveld Academy in Amsterdam. Her work has been included in the collections of the X Museum in Beijing, Le Frac Normandie in Caen, the Zabludowicz Collection in London and The Julius Baer Art Collection in Zurich.

The exhibition 'Around the clock' by Louisa Gagliardi will remain on show in rodolphe janssen in Brussels until 22 October.