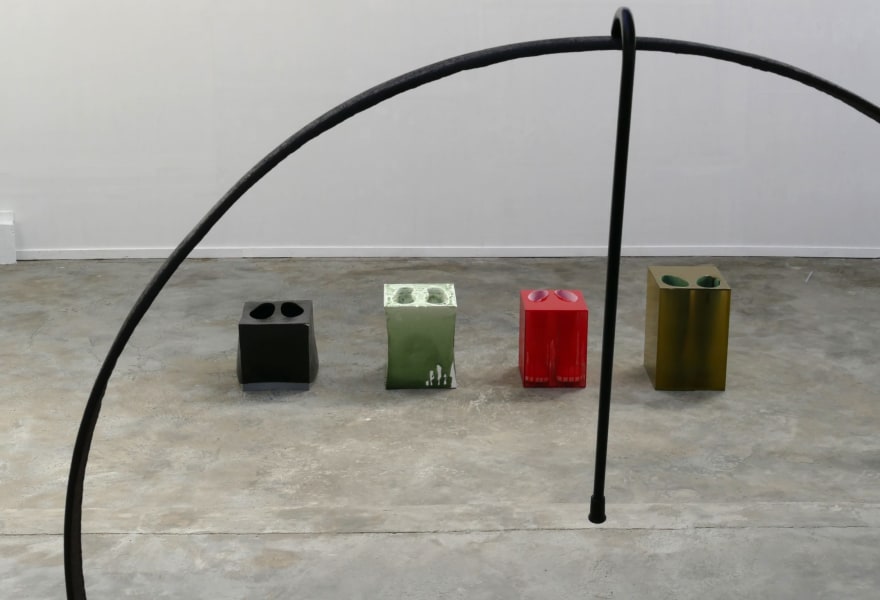 Dutch artist Wido Blokland creates remarkable sculptures in which philosophy and spirituality are meaningfully interwoven. He feels that it’s important to follow his own path, using a unique starting point, so as not to be influenced too much by the artists who preceded him. His practice is aimed at reflecting on the role of human beings. Blokland: "Everything I do as an artist stems from the simple and fundamental question: what is the place of human beings in the larger scheme of things?" Until June 20, his work can be seen in a solo exhibition at Galerie Ramakers.

Blokland studied philosophy - both Eastern and Western philosophy - and visual arts. That combination is certainly reflected in his work. The titles in particular provide the work with an extra layer of content. For example, the exhibition shows a work with the mysterious name "Genèse [Vesica Pisces]". We see a star map in black and white, framed in a gold frame and protected by a layer of glass. Two overlapping circles have been etched in the center of the glas and the part that overlaps - like a Venn diagram - has been cut from the glass. The mathematical form that underlies that Venn diagram, the two overlapping circles, appear to have an official mathematical name: it’s called a vesica piscis. Blokland changes that last word into pisces, the Zodiac sign, and calls the work Genesis, or the origin. That vesica piscis, incidentally, stands for the uniting of two extremes, which are only complete when they are united - and thus have a certain dependence on each other. The form is also used as a way of contrasting the physical with the spiritual: the psyche or the soul. 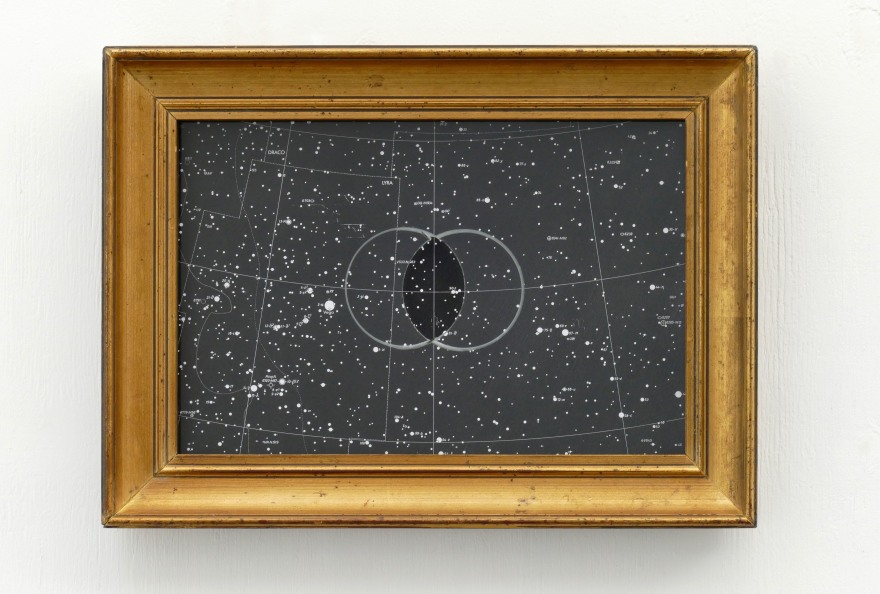 Let’s turn our imagination off for a second. Then we see a second installation that consists of two bases for a coffee table, a table top, a series of wooden and glass marbles, a walking stick and a number of cut pages of star maps. If we look again, with our imagination turned on, we see a somewhat shaky telescope, avant la lettre. The work turns out to be called "Secret Space [Huygens]". Could it be a reference to the famous Huygens space probe that studied Saturn and its moons in 2017? Would those marbles then perhaps represent a series of moons or planets? 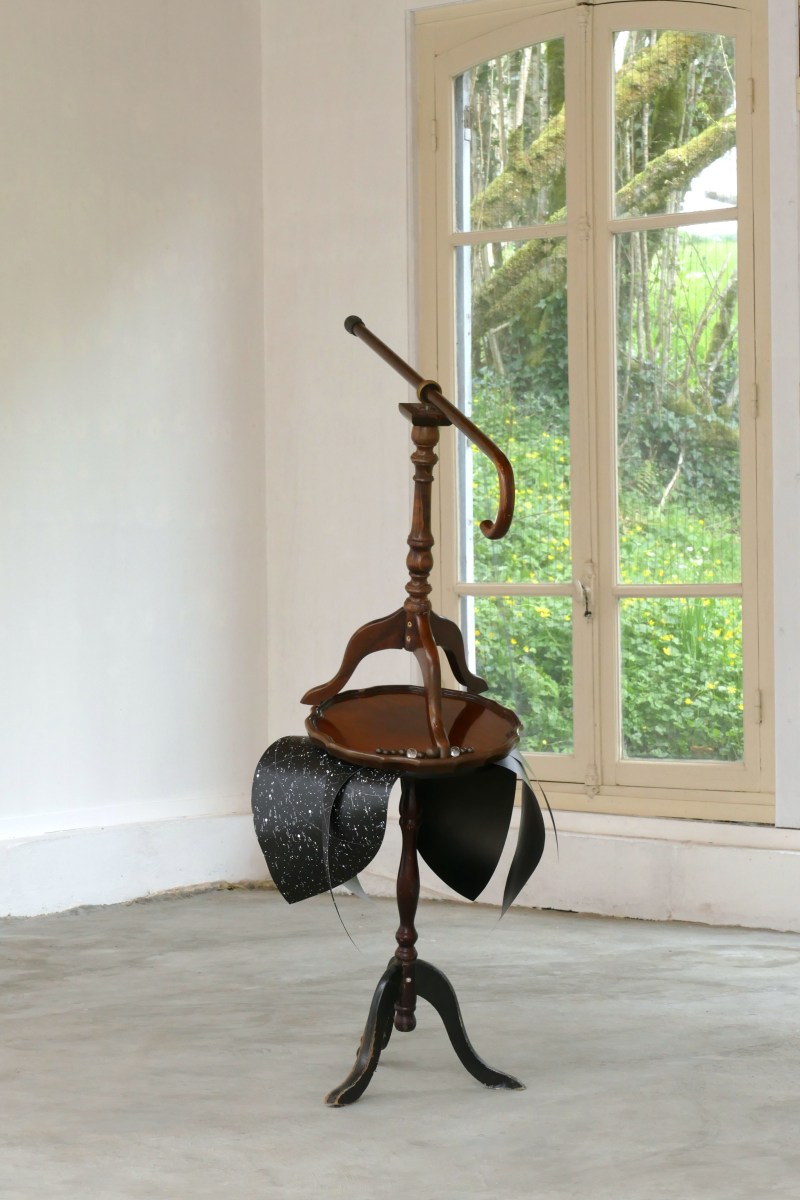 In a third work, "Hermes, [Caduceus]", we see two thick electric cables, shaped in a kind of crooked cross, topped by a classic bowler hat, that appears to be pierced by one of the cables. The caduceus is the famous staff of the god Hermes (or if you are more into Roman gods: Mercury), a staff that is wrapped by two snakes and equipped with two wings: the symbol of Hermes. The god is known as the god of trade, traffic and eloquence. He doubled as a messenger of the gods and protector of travelers and thieves. Why then did Blokland choose a bowler hat as a symbol? 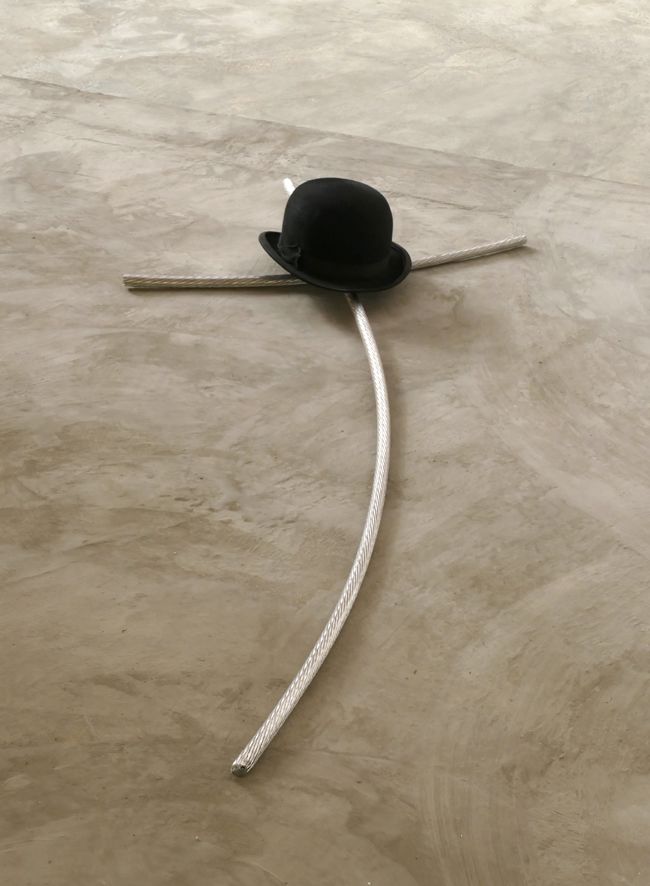 In fact, all of his installations read like intellectual puzzles, full of complex layers and puns. Other works refer, for example, to the Rosetta Stone, which helped us to decipher the hieroglyphs, Ouroboros, the ancient Greek symbol from alchemy depicting a tail-biting snake, the Hindu mantra Sohum, the reborn phoenix and so on. With his installations , Blokland knows how to interweave something concrete with something intangible, resulting in an interesting series of works.

Curious if you are able to decipher all layers within his work? The solo exhibition "when the center is the circumference" can be seen at Galerie Ramakers until June 20.