The gallery of... Marianne van Tilborg 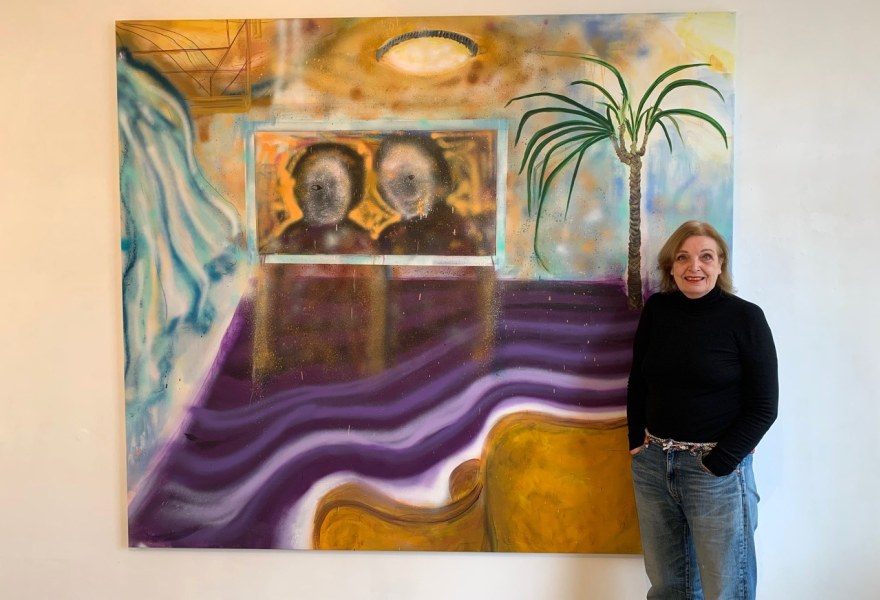 My father was military, Reformed and quite conservative, and my mother was Catholic and a housewife really. I was the oldest of 5 brothers and sisters. Born in 1953, I grew up in the fifties and sixties and art was out of sight. There was music, in the form of Dutch songs and German schlagers. I was just allowed to listen to the top 40, that was actually considered to be too wild. Apart from that, conservative politicians like Wiegel, Luns and Hilterman were the order of the day. I was quite recalcitrant, skipped school and had many alternative friends; Provo's and Kabouters.

Luigi Serafini, Lumen Travo, 1988.
How did you come into contact with the art world?

From my early years I was fascinated by art, that was because of school. I took my class to the Van Abbemuseum, where I first saw Piccaso's "The Woman in the Blue Hat", and it never went away. When I was eighteen I started a relationship with an artist, I moved from Eindhoven to Amsterdam. During that time I visited many museums and galleries; the Marcel Duchamp exhibition at Center Pompidou in Paris was a formative experience for me.

I came to Riekje Swart and Art & Project a lot; I bought my first work of art from Riekje in 1981/1982, a drawing by Robert Combas - Young French and Young Italians were all the rage back then - which I was allowed to buy on an installment basis. I then made many purchases from Riekje, including work by Hervé di Rosa, Chuck Nanney, Philippe Waty. At Art & Project I was able to buy a drawing by Salvo. Swart and A&P showed young artists, but Combas and Di Rosa dived more into the magazine world at the time.

The seventies was the punk era, together with friend I had started a fanzine called Art Holes, and in it we explained the relationship between punk and dada. I often went to buy fanzines in London, and in Art Holes (which I had established with Madelon Ackett) we made interviews with Billy Idol, among others. But we also had our own page in the Hitkrant, under the title: New Music For New People.

I started the "salon" thanks to Alan Vega, the lead singer of the New York cult band Suicide with whom I had become friends. It happened like this: in 1985 he invited me as a table lady to his exhibition at "American Graffiti" (which later became Galerie Barbara Farber) and eventually ended up at my house, where we talked a lot and of course listened to music.

In the Athenaeum Nieuwscentrum I had also put a tray with punk singles next to the till. I bought it from Boudisque against commission. Brian Eno always came by, and lots of other musicians, and everyone browsed through that tray. Vega discovered Japanese punk bands through me, and we played all those singles and those records at my house. I also went to Paris once at his invitation, and there he showed me all the places that were important to him, calling us "The Beauty & the Beast". He was influenced by Genet, Baudelaire, De Lautreamont, but also by the authors of the Nouvelle Vague.

He asked what I wanted to do, and then I told them that I would like to do a salon or something else in art, and that's how he gave me the idea of organizing it in my own home.

I worked at Athenaeum Nieuwcentrum and one day a week at Binnenhuis, an interior design store with a focus on contemporary Italian design. We also organized exhibitions of work by Alchimia, Memphis, Philippe Starck and many others, and often went to Milan. So I also started the "Salon" in my house above the Athenaeum bookstore, where I still live.

I had many contacts with architects, with Theatre group Amsterdam, in fashion and music, and I wanted to bring all those different disciplines together, so that cross-fertilization could arise with the artists I exhibited. I made an exhibition there with Luigi Serafini and Nathalie du Pasquier, who both designed for Achinia and Memphis, but both are now more known as artists. From the beginning my focus was on international artists, such as Droste Rombouts and Guillaume Bijl all had exhibited in my apartment on the fourth floor. I was called "the Peggy Guggenheim of the Spui" at the time, and later "the Bull of the Paulus Potterstraat" when I moved there with my gallery.

I have always been the one to jump the gun, always looking for a mix of cultures, people and artists who were still unknown. I exhibited Remy Jungermann, Meshac Gaba, Jimmie Durham and Chen Zheb, who has become very famous posthumously. I opened my gallery on the Lijnbaansgracht in 1993 with a show of his work. They are all artists who communicated something that I did not know yet.

I always wanted to be an archaeologist, I love to dig, discover other cultures, broaden your world view. I was one of the first to show Andreas Gursky, on the Lijnbaansgracht, back in 1993 or 1994.

Much art was dull and bourgeois, not much happened after the Neue Wilden. From my punk background I opposed this, instead I showed Bruneau and later many other Belgian artists. Bruneau arrived on the Sunday of the opening, I had not framed anything but glued everything to the wall with Pritt glue. It was very busy and those works were constantly falling off the wall. That was the first exhibition in the Salon, in 1985.

The highlight in the Salon was Guillaume Bijl's work "Solarium". He had installed a kind of gym, with a solarium and a bicycle, where you could exercise.

I like to discover things, so I went and still go to Biennales a lot. Preferably the rather unknown ones, for example in one of the Emirates, home to the Sharjah Biennale. I have shown Otobong Nkanga in Sharjah. I participated in Dubai in 2015/2016, and Nkanga's workalong with Meshac Gaba in my booth, and I wanted to show Ibrahim Quraishi's "Islamic Violins". I thought: that is probably not allowed at all, it was a reaction to the culture in Dubai, but I could let that hang. I also wanted to show very different things there than people were used to, I wanted to show that culture a completely different culture, and not show Dutch art, but rather show the world.

I also took part in an art fair in Istanbul once, back in 2008. Erdogan’s political star was on the rise and he hated contemporary art. He had an office on the site where the fair took place and was delaying everything so that we were almost too late to set everything up before the opening. In Dubai it was very different, sheiks just walked around there.

The Sharjah Biennale has a female director, Sheikha Hoor Al Qasimi, a very special woman with a very progressive taste in art, while the country is much more conservative than Dubai.

Which galleries do you feel a national / international affinity with?

I feel most related to In Situ (founded by Fabienne Leclerc) and Galerie Chantal Crousel, both based in Paris, and Annie Gentils, in Antwerp. Prior to In Situ, Fabienne Leclerc ran Galerie des Archives, where she showed, among others, Patrick van Caeckenbergh and Arab artists.

I am still in contact with her, which has been going on since she also started showing Meshac Gaba, around 2015. I did not work with Chantal Crousel, but I admire her programme. She works with Anri Sala, Mona Hatoum and Francis Alÿs, very good artists. Like me, she has a recalcitrant program. In the nineties, I was close friends with Marie-Puck Broodthaers, the daughter of Marcel Broodthaers, who died when she was still a teenager. We once had a shared booth at the KunstRAI. We showed Michel Francois together and she also showed Droste Rombouts. I often stayed the night with her and in the room where I slept there were works by Broodthaers and James Lee Byars, I couldn't sleep because they were so beautiful. Once Byars gave us a tour of Venice, with each of us on one arm, which was quite an experience. I have experienced the wildest things with Marie-Puck.

I have been able to exhibit many artists of my dreams, but there are still some left: David Hammons, Francis Alÿs, Marcel Broodthaers and drawings by Goya. I have been seriously involved with the latter, I already had contacts with a number of private collectors, but the costs to insure the works were too high. Of course I did not have to sell drawings by Goya, but I thought it necessary to show this work, especially in a contemporary context, in order to show how topical Goya still is.

When I started out, everyone was experimenting, now it's clearer. But I kept the punk mentality. I have grown and moved on, just like someone like Frank Demaegd from Zeno X, who has also always kept in touch with the artists of the eighties: Guillaume Bijl, Michel Francois, Anne-Mie Van Kerckhoven, Guy Rombouts, Bernd Lohaus. I admire him very much. And of course Micheline Swajzcer, and the Belgian galleries in general.

Nowadays, it is frumpier than it was then, in the 80’s art fairs were not that important. Back then the gallery was full of people, whereas these days people go to art fairs. It has become more superficial. You used to discover artists at the fairs, also at Art Basel, now you no longer. The Gladstones of this world bring secondary market art to the fairs, which used to be a shame. The difference between auction houses and galleries is getting smaller.

I always try to buy work from my own artists; I own a number of works by Guillaume Bijl, Shirin Neshat, Michel Francois, Jimmie Durham, Otobong Nkanga, Meschac Gaba and Thierry Oussou.

We do not show art that you can easily sell online. I don't do photography or drawings. I am more concerned with the experience than simply showing a picture, for me context, the experience, is the most important. I sell well at art fairs and at exhibitions, when the lockdown is over I can go crazy again.

A Gallery Weekend is fantastic and an Amsterdam Art Weekend too, but I don't sell without shows. We do a lot on Instagram, I do sell Otobong, there is a waiting list for her work, that just continues. Younger artists, however, won’t sell online, unless their work is on offer for bargain prices or in editions. I did an exhibition in Capitol C and there I had Daniel de Paula, Thierry Oussou and Otobong Nkanga, that was just after the first lockdown, everyone was looking forward to it. I first sent pictures digitally, nobody responded to that, but when everyone came to have a look, I sold one after the other. People really need to see art!