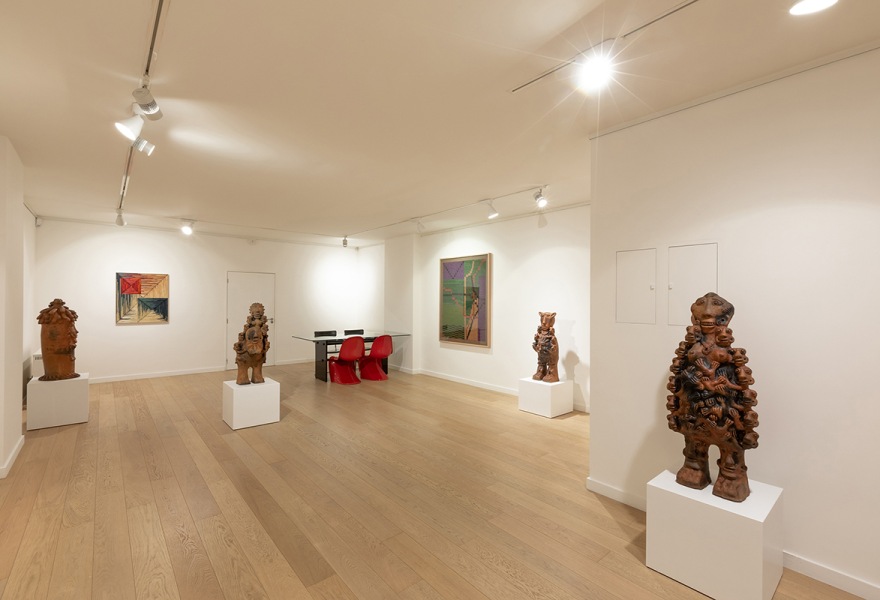 Baronian Xippas in Knokke-Heist is currently showing a duo exhibition with work by Seyni Awa Camara and Olaf Holzapfel (until May 30). In their work, both artists explore themes from the past and present, with an eye for local and global culture.

Seyni Awa Camara's work is striking because, on the one hand, she makes use of traditional Senegalese techniques that she learned from her mother as a child, but at the same time, she breaks with tradition in terms of form, content and aesthetics. Whereas the ceramics of her ancestors mainly focused on practicality, Camara's works are characterised by fantasy and rebellion against the prohibitions of her ancestors. Camara was born in a small village in the south of Senegal, where she still lives. She uses her work to give shape to timeless stories, events and feelings that she previously experienced in her dreams or her fantasy. She also refers to a mysterious childhood memory in which she, along with her brothers, spent time in a nearby forest to complete a mysterious and religious ritual, for which they were supposedly kidnapped by evil spirits. Camara: “We were sheltered by God’s spirits, who taught us to work with clay.” During this experience, she learned the importance of working with clay. Camara creates monstrous-looking figures that occasionally have several heads or carry a dozen animals or children. For Camara, these main characters represent her worldview, in which people are complex and unique. The works are imbued with of animistic mysticism, characteristic of small communities in Senegal. The often distorted faces of her creations refer to our indifference to our ancestors, according to Camara. The artist produces her sculptures in her front garden, after which she fires the clay works - varying in size from 30 centimeters to 2.45 meters - in an open hearth furnace in a pit. Because the works are particularly delicate, she sometimes makes bronze castings so that the works can be made on location. Her work has been exhibited worldwide, in places including Houston, Rome, Mexico City, Dakar, as well as Centre Pompidou in Paris and the 2001 Venice Biennale. 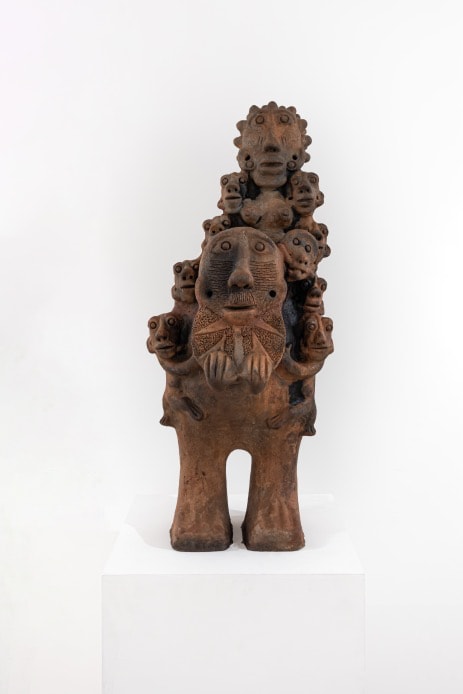 Camara's work is presented alongside a series of works by the German artist Olaf Holzapfel, whose work was featured in an extensive presentation during documenta 14 in 2017. Borders and demarcations play a major role in his work, which is why people often link his practice to his youth in the GDR. Holzapfel: “Yes, it’s a strange thing. No-one would ever say that Georg Baselitz or Joseph Beuys – who grew up during the Nazi era – are former Nazi artists. But my bios, especially in Germany, always point out that ‘he grew up in the GDR’. For a while I thought it was typical chauvinism. They keep you out; you’re not part of their system and thus not a competitor. But it’s more than that. I think there’s still an inner conflict in German society. But I was a refugee in 1989. I jumped over the border in Hungary – it wàs a biographical moment.” Holzapfel also explains that the whole concept of “being in between two things” is culturally determined and has very different connotations in India, for example. The German artist initially studied thermodynamics and architecture, to eventually earn a degree in painting from the Dresden Art Academy. He continued his studies in Ahmedabad, India and then completed a residency at Columbia University in New York.

In his practice, Holzapfel makes extensive use of simple natural materials that we associate with the countryside, such as woven straw, reed and wood. He tries to emphasize that the countryside is more than a secondary surrounding of The City, which is often still regarded as the central sun in our topographic galaxy. Rural activities are not pre-modern but rather a vital part of our contemporary life. Holzapfel examines the extent to which the landscape influences our thinking and our body and tries to make us think differently about the absurdity of contradictions that we consider to be natural: the contradictions between nature and culture and that between tradition and modernity. In his work, he explores the links between technology and nature, as well as the gaps between craft and art, between borders and between cities and the countryside. The artist creates many of his works in collaboration with local farmers and craftsmen in Lower Silesia, the border region between Germany and Poland, transforming centuries-old traditions into contemporary art. He also works further away from home and has previously collaborated with, among others, the Wichí tribe in Argentina and Bolivia. Holzapfel works in a variety of media, including sculpture, painting, film and photography. In 2011, his work was shown at the 54th Venice Biennale.

The duo exhibition with work by Seyni Awa Camara and Olaf Holzapfel can be seen until May 30 at Baronian Xippas in Knokke-Heist.
Dans cet article