Rini Hurkmans is born in Deurne in 1954, the Netherlands.
She studies art history, philosophy, psychology, art materials and craftsmanship at the Academy for Visual Art Education in Amersfoort from 1974 to 1977 and from 1977 to 1981 at the Academy for Art and Design, St. Joost in Breda.
She lives in New York from 1992 to 1993 and participates in the international studio program of MoMA, P.S.1.
Hurkmans is regularly visiting lecturer and artist in residence in the Netherlands and the USA, including New York, Boston and Minneapolis. In 2019 she works for three months as Artist in Residence at the Royal Dutch Institute Rome (KNIR).
Since 1990 Hurkmans is a teacher and mentor at the Gerrit Rietveld Academie in Amsterdam and she initiates several exhibitions and round table discussions with students and alumni. From 2010 to 2017 she participates in the research group of LAPS, Research Institute for Art and Public Space, Amsterdam.
Her work is included in many outstanding public and private collections. In addition, she realizes important public commissions in the Netherlands and abroad, including a sculpture for the ‘Parque de la Memoria’ in Buenos Aires (presently under construction).
She travels extensively in Europe, South America, the Middle East and Asia.
Currently she lives in the Netherlands and France.


From the beginning of her career, Rini Hurkmans is concerned with topics such as absence, loss, disruption, alienation and the related concepts of safety, security, identity and compassion. This can be perceived in the photo series Pietà, in the films Dear Son, The Flavor of Salt and Don Quixote but also in the sculptures The White Shroud and The Inner Garden.

Life, art and politics are intertwined in a continuous dialogue and each specific period requires its own thoughts, strategies and forms.
Hurkmans initiated the conceptual artwork Flag of Compassion in 2002 out of the desire to go beyond the framework of cultural consensus and consumption. Since 2008, she is an advisor to the Unda Foundation, the foundation that manages the artwork and also organizes a series of Making Waves events around themes related to Flag of Compassion. By engaging with the Flag, it is investigated how a work of art can activate ethical questions in society and how it can function both within the arts and in society. Hurkmans is the driving force behind the book Compassion. A Paradox in Art and Society (Valiz, 2017) in which Flag of Compassion is discussed as a case study.

She is currently conducting further research into the concept of loss in relation to ethics and politics and is developing new work based on her working period as Artist in Residence at the Royal Netherlands Institute in Rome in 2019. Her research into the press photo she bought in 1992, and which inspires her work ever since, of the moment Michelangelo's Pietà was attacked in 1972, serves as the starting point for the work in progress.
Oeuvres d'art
Médias
Points forts
Recommandations
Collections
Expositions
Position sur le marché
CV 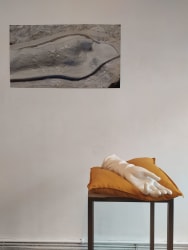 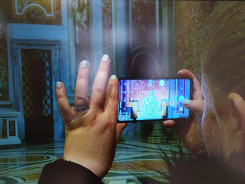 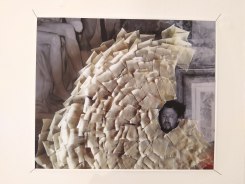 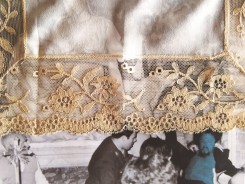 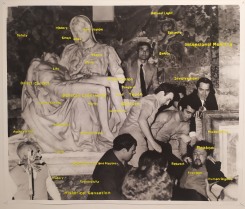 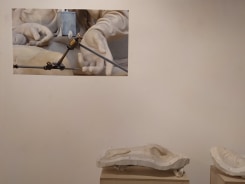 Lecture in the frame of the exhibition "Pietà, a Reconsideration of the Gesture" by Rini Hurkmans at Lumen Travo Gallery. Professor Christa Maria Lerm Hayes reflects on the main topics addressed in this exhibition, sharing her fascinating interpretations about Michelangelo's Pietà and the attack back in 1972, the role of the Church, the healing power of marble and more in relation to Rini Hurkmans’s artistic practice.
expositions 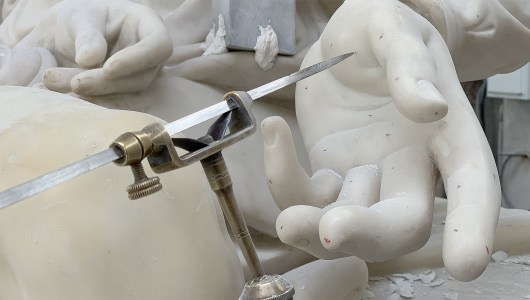