Throughout his early career, Franz has developed a captivating style of organic representation where viewpoints in his paintings are refracted, obscured, and through this brought closer to life. Directly confronting the complexity of contemporary existence, he approaches the medium of painting as a venture in witnessing and recording his time.

In his paintings, muted earth tones are contrasted with shadowy outlines and full primary hues that comprise invented architectural spaces or uncanny perspectives. The pulling and pushing tension within his brushstrokes captures the sensation of heavy, enlarged forms giving way to more delicate arrangements, infused with the imbalanced weight and proportions one would find in a dream.

Franz is careful to distance the viewer’s perspective from the interior of his paintings. He describes this process as “clinging to the inherent depth and secret of things.” Buried within his images the viewer searches for the face of a figure or the contours of the skyline. Amongst the seemingly unconnected locations pictured throughout his oeuvre he depicts the environment of the academy, onstage performances, and beds full of dreaming bodies. Throughout these scenes, the motif of collective longing is projected into a broader social context, as are suggestions of detachment, inaction, and rebelliousness. 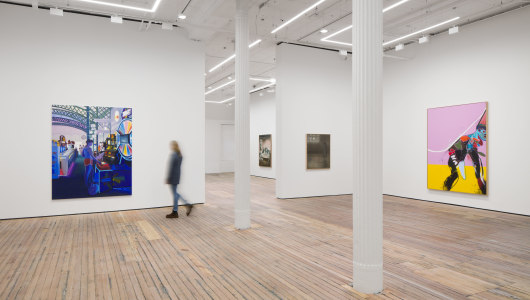