If you are concerned about whatever it is you want to do, you dream about it. You wake up in the morning and you’ve got a solution. You work it out. There is always tomorrow
– Sam Gillian

Liberating the canvas from the constraints of its stretcher, Moataz Alqaissy (°1986, Baghdad) pushes the traditional parameters of what constitutes a painting. In 1965 Donald Judd wrote "The main thing wrong with painting is that it is a rectangular plane placed flat against the wall”, declaring that painting in the traditional sense has become a dead end. The notion of ‘painting being no longer relevant’ is a recurrent theme in recent art history. However, it also caused artists to think further, to reflected on the medium and trying to break it free from its barriers. How can we push its limits? What about the spatial relation between a painting and the room in which it is hung? What defines a painting and what can it become?

Inspired by artists as Sam Gilllian (°1933, U.S.A.) or Simon Callery (°1960, U.K.), Moataz Alqaissy plants himself in this tradition, pursuing his own answers. His work introduces a shift in visual hierarchy, liberating the canvas from its frame and turning an historically ignored element, into the dominant, primary part of the work. On the floor of his studio, he cuts, drips, pours layers of thinned gouache, adds pigment, sculpts in a mould, folds, deforms, … Even though the artist starts from a preliminary sketch, it’s the creation process that determines the final piece. In the end, the work is hung on the wall. Only then, the artist can spot the missing element or ‘its weakness’, before finalizing the piece. The process is dynamic and is seen by Alqaissy as an ongoing conflict between the primary and painterly elements, between spotting the problem and finding a solution.

Although this approach seems merely formal; each work has its own meaning and story. Being born and raised in Iraq, and currently living in Belgium, Alqaissy is balancing between two cultures. It determines the shape, colour palette and idea behind each piece. However, the artist refuses to manifest himself as explicitly activist and considers his paintings as a mere extension of himself and his background. By detaching the canvas from its classical function, his paintings manifest as free forms, subtly expressing human emotions, while evolving into a new spatial experience. 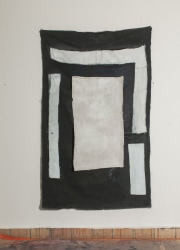 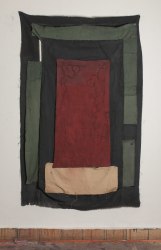 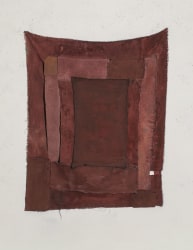 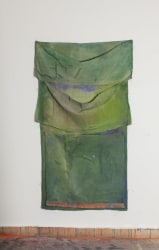