client
Klaas Rommelaere (°1986, Roeselare, lives and works in Antwerp) graduated as a fashion student from the Royal Academy of Fine Arts in Ghent in 2013. He did internships with Henrik Vibskov and Raf Simons, but realized that the fashion world was not the world where his ideas could come to life. Inspired by films, comics, books and personal experiences, Rommelaere began to translate his ideas into visual work, but still using the materials he knew: needle, thread, wool and yarn.

Rommelaere's visual language is rooted both in the everyday of his life and in pop culture: quotes from films or animations are mixed with interpersonal observations and experiences. Larger scenes and whole images are embroidered. The results are layered, strange visual stories.

In the beginning, Rommelaere embroidered his works entirely on canvas himself, which often took weeks and months. At some point, he began to collaborate with a group of older ladies (madams) in Merksem, Roeselare and Ingelmunster, who to this day assist him with cross-stitching, crocheting or knitting.

"The last year of my studies I decided to make everything by hand. Because I love to do that, but also because I want to go against the current pace. Everything moves so fast that the slowness of handwork is liberating. It brings peace to your mind and that is addictive. Crafts and textiles require skill and time. (...) A work of mine takes months or even a year to finish. (...) I think that's another kind of punk - a middle finger to some contemporary art that's easy and overhyped."
- Klaas Rommelaere in an interview with MoMU, 2018
Oeuvres d'art
Articles
Médias
Points forts
Recommandations
Collections
Expositions
Position sur le marché
CV 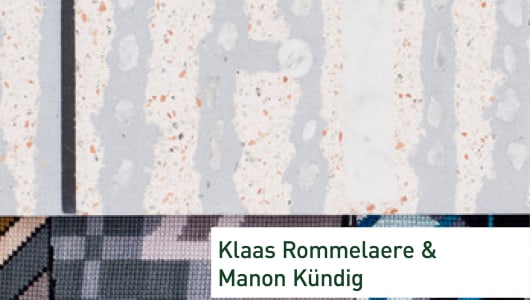