Social engagement according to seven artists

Curator Petra Heck has won her spurs in the art world. Since the beginning of 2019 she has been working as a curator at Stichting NDSM-werf in Amsterdam Noord. A challenging place where urban development, art, architecture and experiment meet in a vast and raw place. A former shipyard, where Dogtroep put location theatre on the map and where many artists and initiatives such as Sexyland have their place. In the years as a curator at NIMk (Netherlands Institute for Media Art) she worked a lot with artists who experimented with video and new media.

Petra’s independent mind and social involvement ensure she is always looking for the relationship between visual art, (electronic) music and developments in society, the socio-political context. Questions such as 'how do you connect past, present and future in one place and how do you preserve a space for creativity and experiment for the city?' occupy her and stimulate her to think about creating places where different voices can be heard and where different disciplines and target audiences meet.

I like context-specific work and a little activism from time to time. A splash of lightness and humour is appreciated

Who Cares? by Petra Heck

“I have been thinking about that: how sometimes we have to stop what we are doing to feel the true impact of something, to let our bodies experience that impact, the fury of an escalating injustice, a structure as well as an event; a history, an unfinished history. Sometimes to sustain your commitments you stop what you are doing.” - Sara Ahmed

Especially during the lockdown, but now it is still super visible who are the most vulnerable in society, who have been hit hardest in this crisis. The enforced 'doing nothing' applied to only a few, and was mainly a 'luxury' position that certainly did not apply to everyone. Social distancing, which was actually physical distancing, also caused a lot of stress and loneliness among the elderly, singles and young people.

I believe that everyone has, in one way or another, become 'disturbed' in their thinking and acting by this time. With Covid-19 it became abundantly clear that the disrupted relationship between man and nature, industrialization and globalization played a major role and will again play a role in future pandemics or other disruptive 'natural' violence. There is an urgency to do things radically differently, to find a new balance.

This inspired me to compile the following selection of artworks in which socio-political notions, personal stories and especially the subject of care are central. I chose works in which systemic processes, power structures and oppression are highlighted or tackled in an often very personal way: take care of the other, yourself, the planet, in a sometimes seemingly 'unproductive' way. 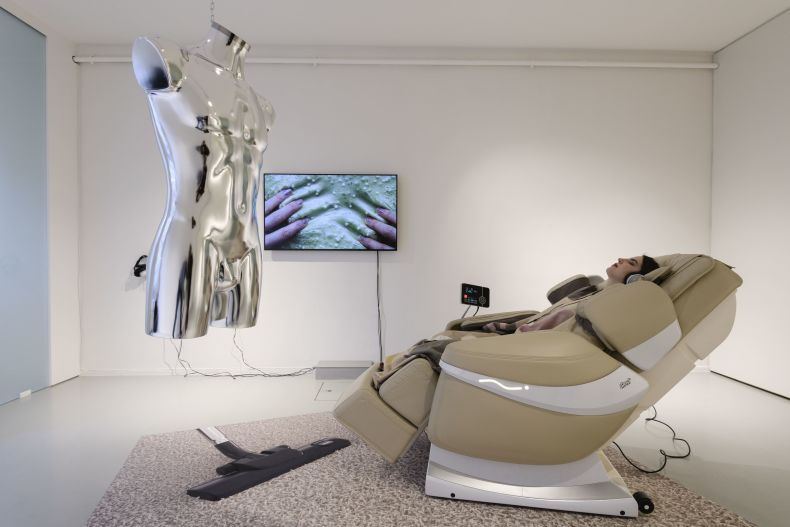 2 Éléments multimédias ᛫ 13 Oeuvres disponibles
2 Spectacles ᛫ 0 Points forts ᛫ 1 Recommandations
One of the first works Margarita and I had in mind when thinking about 'The power of Doing Nothing' was the work of Emmeline de Mooij entitled 'Attempt to nap'. Seated in a supersonic massage chair that first 'measures' your body, you watch a slime video, a popular internet phenomenon. Slime videos are popular videos on Instagram of a slime-like substance that is kneaded by women's hands and in which plastic objects sometimes disappear into the substance.

The videos fall under the popular YouTube genre of ASMR (Automated Sensory Meridian Response), films in which women turn to the viewer in a soft whisper and give them "personal attention" by pretending to wash hair or measuring their eye sight at the optician’s.

Emmeline de Mooij examines themes such as loneliness, the removal of the body from social processes, care, maintenance and repair, spa and wellness culture, "emotional labour" and the "inability to turn off the standby button". Although these are very recognizable subjects - certainly for me, as a mother of 2 children aged 7 and 9 - they are often difficult within the world of visual art. Emmeline processes these themes in a poetic and humorous way. 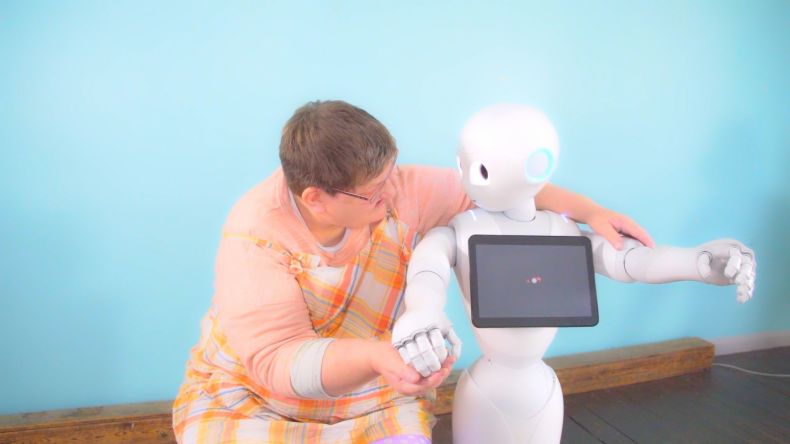 4 Éléments multimédias ᛫ 23 Oeuvres disponibles
5 Spectacles ᛫ 0 Points forts ᛫ 1 Recommandations
Rory Pilgrim is an artist with a rare authentic and sensitive voice within the visual arts. He often closely collaborates with various groups to ultimately produce a work. The exchange of ideas, friendships and information is crucial to the collaborative effort. Rory is engaged in empowerment issues and tries to challenge the way we come together, talk, listen and fight for social change by sharing personal experiences through intensive workshops.

Inspired by the feminist thinker Donna Haraway, he avoids binary contradictions and demarcated categories and prefers to explore their boundaries and interfaces. Rory also focuses on communality instead of individualism and his approach has an extremely personal character.

His film "The Undercurrents", for example, tells about climate activists and caring for the world, but the focus is ultimately on the house that appears to be a refuge for the protagonists. The film suggests a connection between the earth in need of attention and protection and the young people who need a home for intimacy, security and their future.

Rory involves everyone involved in the process of making the film in a close and authentic way, in order to offer that safety and security there too. In a film like this, Rory manages to make the (too) big issue of "environmental activism" intimate, personal and approachable, which is typical for him. 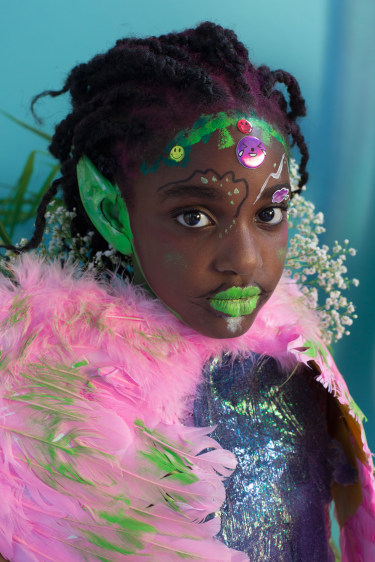 3 Éléments multimédias ᛫ 22 Oeuvres disponibles
6 Spectacles ᛫ 4 Points forts ᛫ 1 Recommandations
Melanie Bonajo also enters into close collaborations with groups of people or children and is inspired by their ideas or a way of life. A way of life that often falls outside capitalism. Melanie gives insight into the consequences of this way of life, and then applies them to her own ideas about what she believes is possible in the future. Only adding a healthy dose of fantasy and humour.

Anarchistic and special as she is, both as a private person and as an artist, Melanie opens up prevailing structures and explores feelings of alienation that are often reinforced by digital elements: alienation from ourselves, the world, nature, our body, intimacy. Melanie invites us to rethink how we look at people who are different from ourselves and to reflect on existing power structures that value certain lives above others. She is characterized by an enormous emancipatory power, which she expresses very lovingly and convincingly in her work. 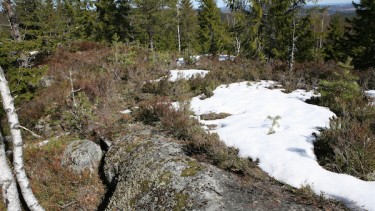 2 Éléments multimédias ᛫ 9 Oeuvres disponibles
4 Spectacles ᛫ 5 Points forts ᛫ 0 Recommandations
In the work 'Mineral Rights, Tveitvangen', Lara Almarcegui questions the ownership issue of the earth and the soil beneath it. Mineral rights are regulated differently from country to country. Many companies have already acquired the rights to extract minerals from the ground and the race for mining in space has also been going on for some time. As a private individual, you can hardly purchase mineral rights anywhere. Lara managed to buy a square kilometre in Tveitvangen, not far from Oslo, where she would be allowed to extract the minerals from the ground. By not excavating the iron that is in the ground there, which is used for the construction of most houses, she clarifies how land ownership and the right to mining are dealt with. Lara makes it tangible how we deal, act and respond to our environment. 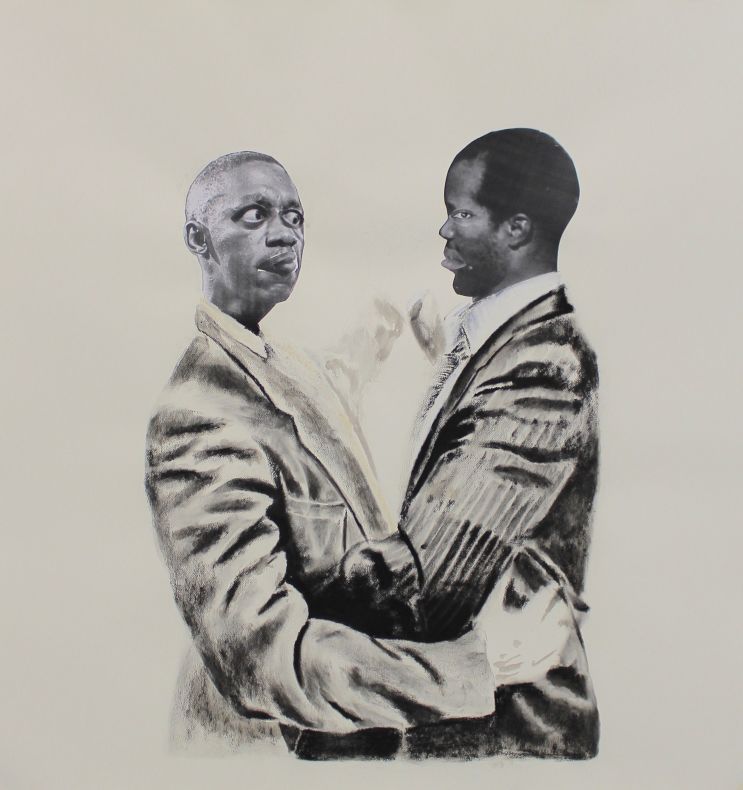 Neo Matloga
0 Éléments multimédias ᛫ 0 Oeuvres disponibles
0 Spectacles ᛫ 0 Points forts ᛫ 0 Recommandations
Neo Matloga creates collages / paintings with characters that have a hybrid appearance. The faces are a patchwork of photos of friends, family and well-known South African figures from the world of politics and art. As a result, the faces no longer seem to add up. Eyes, mouths and ears are out of proportion. Skin colours abruptly merge. Other elements are also strangely out of place, as if the figures could change continuously. The artist himself wrote about his ‘Black collages’ (2018) series: 'if there's a possibility that a black face is seen as a distortion, what I'm saying is, OK, here, you have this image of the distortion, which was already there in your prejudices or racist gaze. The process of cutting, reconfiguring, and collaging facial anatomy is my way of trying to identify with the racist gaze, thereby dis-appropriating its oppressive power". 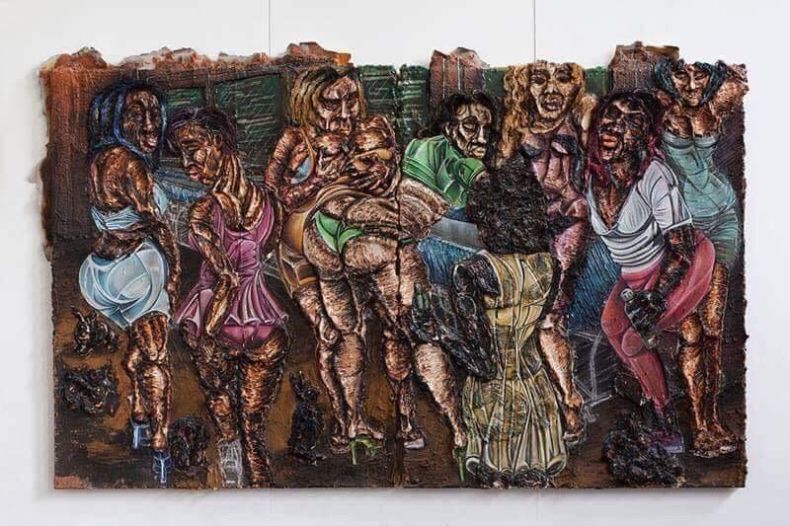 3 Éléments multimédias ᛫ 7 Oeuvres disponibles
3 Spectacles ᛫ 0 Points forts ᛫ 0 Recommandations
Raquel van Haver’s raw, narrative and figurative style of painting that has its origin in daily life. Raquel paints her friends in Amsterdam Zuidoost, scenes she encountered on trips to Colombia or South Africa. Raquel turns these photos and sketches into new realities. As a viewer, you are confronted with your own identity (the identity of the spectator) and the identity of the other (the shape that is seen).

Van Haver is interested in the diversity of people and cultures and how they respond to each other in public spaces (or not). She often collaborates with other artists, musicians, hip-hop producers and poets. For example, she is now with a collective of artists in a studio building a bit further on the NDSM wharf towards the still operating Damen ship repair yard. 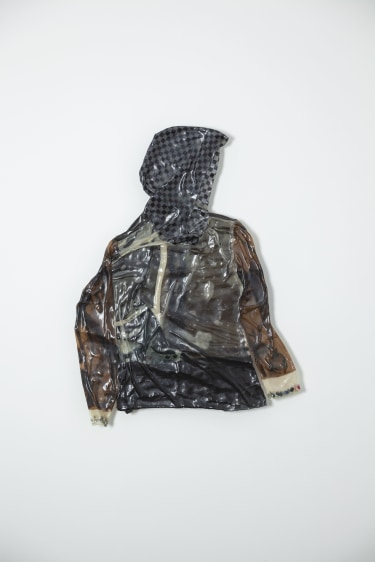 3 Éléments multimédias ᛫ 8 Oeuvres disponibles
1 Spectacles ᛫ 0 Points forts ᛫ 1 Recommandations
Although the work of Wouter Paijmans only seems to focus on the visual qualities of the Western consumer society, he also deals with the production of clothing while making his work.
I read the following about this that interests me: 'The artist annoys himself by reproducing boredom copies of original textile panels. This method of making the same thing over and over again introduces the concept of "ready-to-paint": using the original work as a blueprint for imitations. Paijmans acts both as the sewer and the manager of his own sweatshop.'