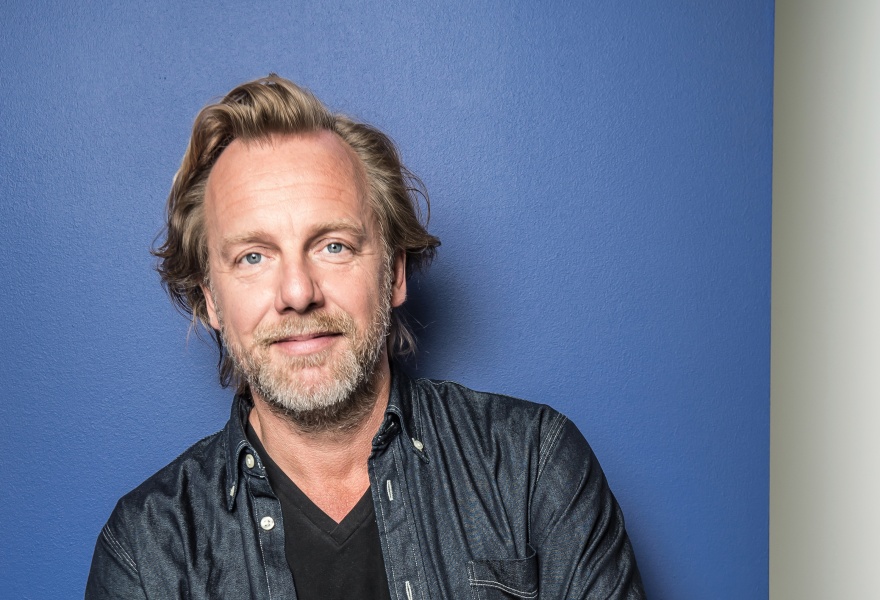 In the 'The gallery of…' section we talk to a host of gallerists from the Netherlands and Belgium: when and how did they start their gallery, what has changed in the art world since, what is their profile, what do they collect themselves, and what has been the impact of the pandemic on their gallery? This week it’s Jason Poirier dit Caulier (PLUS-ONE Gallery)

Did you grow up with art?

Art was always present at home. My father, Marc Poirier dit Caulier, was a gallerist (X-ONE gallery) in the 1970s, which was a very exciting period. He showed artists such as Jacques Charlier, Lili Dujourie, Bernd Lohaus, Guy Mees, Philippe Van Snick, Jan Vercruysse and Marthe Wéry. He was the first to bring work by Lili Dujouri, and showed Fred Sandack, Sol Lewitt and Victoir Burgin very early on, in short, he had his finger on the pulse in a period in which minimal and conceptual art was introduced. He later worked closely with Fernand Spillemackers, at his leading MTL gallery in Brussels.

Guy Mees, Walter Swennen, Philippe Van Snick and Bernd Lohaus were artist friends who visited our place a lot. My father was a very sensitive man, with a keen eye for artistic quality. Unfortunately, that sensitivity also translated into alcoholism and that disease took a hold of him. He died much too young, I was just twenty-six years old at the time. He still has a very big impact on me to this day. So yes, I learned a lot from him, and I'm very grateful for that. If he was still there, I think we would be a good match.

﻿Guy Mees, Niveauverschillen, 1970, 12 black and white photographs. (Guy Mees with Marc Poirier dit Caulier, Franchita Foubert (pregnant of Jason) 1970)
How did you come into contact with the art world?

As a teenager growing up in the eighties, I was not always completely in tune with the 'minimal' and 'conceptual' movements that really appealed to my father. Only Walter Swennen, a good friend of my father, intrigued me enormously: his freedom and humour drew me to his painting. In retrospect, of course, I look at those fascinating 'minimal & conceptual' years differently…

At that time I was more fascinated by emerging American artists such as Richard Prince, Jenny Holzer, Barbara Kruger and Keith Haring. Thanks to one of Dad's best friends, Patrick Verhelst – who was the first to show Keith Haring in Europe, I came into contact with Keith. That was really one of my most important first experiences in the art world. When I was seventeen, I was that 'kid' who was with him a lot in Knokke, when he made that work while installing his major solo exhibition at the Casino. He even made nine works on paper with my baby photos: 'The Story Of Jason'.

And at some point these worlds collided… In the early 1970s, my father exhibited the (then) conceptual artist Tony Shafrazi. Fifteen years later, he had become one of the most important gallerists in New York, working with Jean Michel Basquiat and Keith Haring. So of course I went to New York chasing Keith Haring, what a time… I met so many idols. When I got back from New York I only wanted one thing. That same rock 'n roll and opening a gallery.

The first experience I had working in a gallery was by participating in a fantastic and huge Warhol exhibition, organized by Ronny Van de Velde (the father of Sofie Van de Velde, my colleague/partner gallerist). He had rented the impressive Zuiderpershuis in Antwerp for this and showed a fantastic and wide selection of the best Warhol prints: Electric Chairs, Campbell Soups, Marilyns, Cows, you name it… it was a spectacle with 'Silver Clouds', ecoline projections and a DJ at the opening. A great immersive experience, it was like being in The Factory. Beautiful posters were screen printed and the show’s catalogue is a hard to find these days. I really enjoyed that first experience. As a way of thanking me Ronny Van de Velde gave me a drawing by Jules Schmalzigaug, a first step in collecting myself.

The meetings with Keith Haring and many other artists and the first experience in a gallery were enough to start my own gallery with great enthusiasm, but I was way too young at the time and had no money at all to start, so I decided to go to university anyway. I thought the art and gallery world is a very special 'market'… so I went to study economics at the University of Antwerp with art in the back of my mind.

My thesis (master's thesis) was entitled 'Investments in the art market – the art trade'. After my studies, however, I got the opportunity to work for large companies, but that turned out not to be my thing in the long term. With some friends I started one of the first web design agencies in Belgium, and in the following twenty years I remained active as a founder or co-partner in companies that were strong in communication and design. A very fascinating and instructive time, but after my fortieth I decided to return to my first passion, and started the PLUS-ONE Gallery five years ago.

The name PLUS-ONE is of course a nod to the name of my father's gallery from the 1970s: X-One (the cross turned into a +) but also stands for 'with others'. We are actively looking for collaborations, which has of course translated into far-reaching collaboration with Gallery Sofie Van de Velde. We've known each other since we were teens -our fathers used to work together-, but apart from that: we have the same long-term objective.

Transparency, collaboration and sustainability are our key drivers. Within the artistic program of PLUS-ONE Gallery we do not choose a particular medium, although performance, photography and video are not our specialization. Conceptual art has the upper hand and painting is prominently present. One could take words such as socially critical, impactful and powerful, innovative yet anchored in a tradition as a guideline.

Today, I want to stick to a majority of Belgian artists anyway; there is so much talent nearby and the proximity of their studio ensures an even stronger connection.

﻿Extra Time, PLUS ONE Gallery (Nieuw-Zuid) 2020.
What do you think is the best part of being a gallerist?

There are several things that are very nice about our profession and the trajectories that go with it that I really enjoy. For example, it is very fascinating to see that playing a game of ping pong with an artist can lead to a beautiful exhibition. How we get from a white sheet of paper to a beautiful whole. More generally, it is of course wonderful to be able to take small, large, strategic or fun steps together as a partner of the artist in building up his practice and taking it further into the world.
Of course, the interaction with collectors and art lovers is also wonderful. People who have built up solid collections over the years that you can turn on to the gallery's programme. Or young and new collectors taking their first steps; their happiness with a first purchase is something that stays with you forever.

Which national and international galleries do you feel an affinity with?

I could name a whole list of interesting galleries here. I recently looked at Galleri Nicolai Wallner, which is a gallery with a lot of fascinating artists, who have also positioned themselves very strongly internationally from a strong – in their case Scandinavian – local anchorage, without opening a branch in every corner of the world.
We recently partnered with Gallery Vacancy in Shanghai and Nino Mier Gallery in LA, two galleries that, besides showing engaging artists, are also run by a gallerist I get along with. Let that serve as a guideline: good personal connections have become increasingly important.

Oh, I could think of a lot of names, but those artists are affiliated with very powerful galleries, and I don't feel the need to compete with them. Maybe one day we can work together on a project, who knows… If everyone is open to that, that's great.
In an 'ideal world' I would have liked to work with a few artists during the start-up phase of the gallery who at that time had opted for a more 'established' gallery. When I look at that now, I sometimes think: I would have presented their work in a different way, emphasizing different aspects of their work. And yes, maybe better in my eyes :-)

The ideal world you refer to in your question is now unfolding – together with various artists we can develop a trajectory, agree on clear objectives and search for people who want to help us achieve our goals.

﻿Sofie Van de Velde & Jason - Opening Jenny Brosinski (2021)
What has changed in the art world since you took your first steps?

If I compare today’s artworld with that of the eighties, so much has changed, the art world has become much broader. Knowledge is more widely disseminated. In the past, there were only a few people with a lot of knowledge and therefore a lot of power. Now – thanks in part to the internet, Instagram and art platforms like this – there is a much faster dissemination of knowledge. As a result, there is more diversity and at the same time a greater need for transparency. And the latter seems to me to be the main difference compared to the past. Information, for example about prices, is now easily available. That transparency is the basis for trust. The art trade wasn’t very transparent in the past, and a more transparent trade will make it more trustworthy to a wider audience. Earning that trust as well as lowering that famous 'gallery door threshold' are important missions for us as gallerists.

First of all, I collect work by artists affiliated with my gallery, but I am also a customer of befriended Belgian galleries, as well as some international ones. My collection is diverse and can also be influenced by encounters and discoveries. It is a very personal and eclectic choice.

I also try to complete the collection by purchasing works by artists my father worked with. This gives the whole a nice timeline of our course in this world.

I also love bringing smaller works together into what we now call 'The Wunderwall'. Here works by Keith Haring, Raymond Pettibon, Guy Mees, Walter Swennen, Sol lewitt, Nadia Naveau, Nel Aerts, Beni Bischof, Marcel Broothaerts and many others hang together, as a continuously moving view of what I find interesting.

The pandemic and the moment that everything slowed down a little made me think. It wasn’t as if we’ve been idle, the door was closed, but we continued to work behind the scenes. Yet, it was a moment of greater focus, more depth and a search for connections nearby. Nevertheless, the speed and light-heartedness of the international art trade forces you to contemplate. I don't feel the need to be at five international art fairs with the gallery, from LA to Shanghai. Instead I want to build a strong and more local network and find partners in those distant foreign cities in order to work on the growth of our artists in a like-minded way.